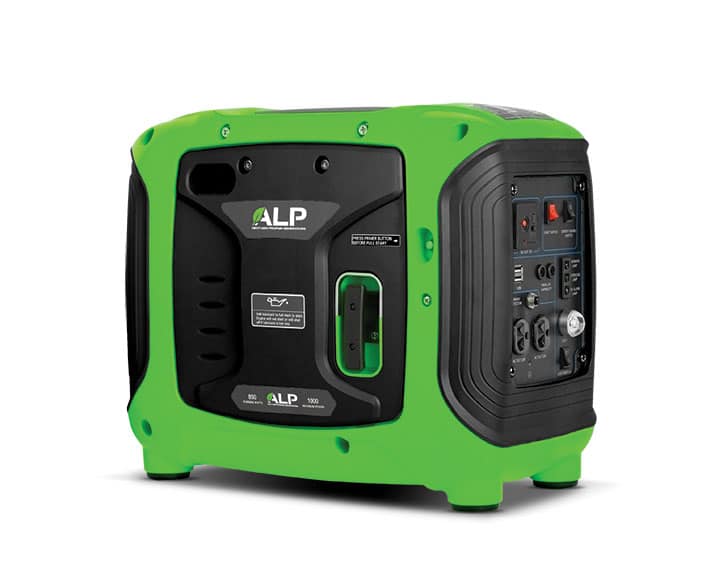 Portable inverter generators with clean, usable current run quieter and allow you to escape the crowds in favor of remote campsites

Getting away from civilization is what RVs are all about. But when you’re dependent on shorepower to run the appliances or charge the batteries, you can’t get much farther away from civilization than the longest extension cord you’re carrying. If boondocking or dry camping is what gets you up in the morning, you can still have your AC-powered appliances thanks to portable gas- or propane-powered generators. Light, small and quiet, they’re ideal for both the outback and the in-close, and they can even be handy around your stick-and-brick house if the power goes out.

A Case for Quiet

An important feature of a generator, as much as its size, weight or power output, is noise — especially if you use it in a campground or anywhere other campers are nearby. You might be inside your RV enjoying a movie, but outside, the only thing your neighbors can hear is the droning exhaust of the generator running your TV. This is why industrial generators are a poor choice for RVing. They put out gobs of power, but they’re loud. That’s not a problem at a worksite, but it won’t make you any friends in a crowded campground  and might get you thrown out of places that enforce strict noise limits and “quiet hours” during which generator use is not allowed.

The best solution to generator noise is what’s called an inverter generator (IG). Conventional generators run at a steady RPM to maintain consistent power output, and they can be prone to power surges and dirty power that can damage some devices. They run bigger engines directly driving the generator unit, with less body casing and a weaker muffler. The result is a lot of AC power and enough noise to wake the dead!

Inverter generators are quieter because of better case insulation, better exhaust mufflers and smaller engines that drive the process. IGs create three-phase AC power that is run through a rectifier to make it direct current, then fed to a pure-sine-wave inverter that produces the clean, usable, 60-hertz, 120-volt AC current. Inverter generators can automatically vary the RPM according to the demand resulting in less noise and better fuel economy, and the output current is safer for charging fragile electronics.

Inverter generators come in different power outputs, typically from a low of 1,000 watts up to 3,500 watts, with a few hitting 7,500 watts. How much power you need depends on how many appliances you want to run simultaneously. Look up each one’s power consumption and add them up; that’s your minimum generator output. You probably don’t need a 3,500-watt unit if you tend to stay only at campgrounds where shorepower is available. A 1,000-watt generator is sufficient to charge your RV’s batteries between stops. A 2,000-watt unit is a good compromise. It will run most of the appliances, but probably not an air conditioner. Some generators can be hooked up (paralleled) together so, for example, two 1,000-watt units can put out 2,000 watts when run in series.

Portable generators run on gasoline or propane, but most RVers go for gas models. Propane is a good alternative because you can buy it at most fuel stations; it’s also kinder to the environment. If you’re a belt-and-suspenders camper, get a dual-fuel generator that can run on either gas or propane.

If you have bad memories of working up a sweat yanking on a pull rope to start a reluctant lawnmower, you’ll be happy to learn many generators come with electric starting. The only weak link in this chain is the battery that powers the starter, so look for a generator with both a pull rope and an electric starter, or go full Buck Rogers with a starter that uses a wireless remote so you can fire up the grill for breakfast without first going out to fire up the generator.

Other options to consider include the right outlets to connect your appliances and hook up to your RV; an automatic voltage regulator to protect sensitive electronics; a circuit breaker in case of a short; a wheel kit to make moving the generator easier if it’s an extra-large, heavy model; and an oil-level window or electronic oil monitor instead of a dipstick to take the hassle out of checking the engine oil. If the generator can be paralleled to another similar unit, the parallel kit might be an option.

Just like your tow rig, a generator needs regular service for reliable performance. Check the oil level, spark plug and air filter at the recommended maintenance intervals, and keep extra oil and spare plugs and filters on hand for on-the-road service. Excess smoke on start-up or high oil consumption are symptoms of more serious problems like worn valve guides or piston rings. Keeping the generator clean makes it easier to spot developing leaks.

You’re obviously not going to run a generator inside your RV, but you still need to put some thought into where to set it up. In a campground, you’re limited by your neighbors — the farther your generator is from your RV, the closer it is to someone else’s — but out in the boonies you have more latitude. Set up the generator far enough from your campsite, and downwind, so you’re not breathing exhaust fumes, and while you’re at it, make sure the fumes don’t blow into a neighboring site.

Following is a selection of the best and most popular brands of portable inverter generators, plus summaries of their models and features. Prioritize your requirements — wattage, weight and available options — and choose the best one to power your next adventure.

The propane-powered ALP ($549) puts out 1,000 watts and runs for 60 hours on a 5-gallon cylinder or three hours on a 16-ounce propane canister. It comes with parallel ports, an ultra-bright emergency LED light and multi-charging power outlets. At 28 pounds, it’s easy to move. It comes with a one-year limited warranty and is available in six colors with black or gray panels. A propane tank and 20-foot hose are sold separately.
ALP, www.alpgenerators.com

The 2,000-watt Dual Fuel Inverter Generator (model number 100402, $755) is parallel-ready and runs on either gasoline or propane. Its ultra-quiet operation (53 dBA

With wireless starting from up to 80 feet away, the 3,500-watt Wireless Start (model number 100262, $1,299.99) includes a battery, an Economy Mode, an RV-ready 50-amp outlet and paralleling capability. The 3,100-watt and the 3,500-watt models are easy to handle (literally!) with a fold-down tote handle and wheels. Set top-case handles make lifting into a truck or compartment easier.
Champion Power Equipment, www.championpowerequipment.com

For the “more power” crowd, the open-frame-designed eZV4800 ($699) churns out 4,800 watts, has recoil starting, and runs for 11.5 hours on a tank at 25% load. EcoMode saves money on fuel without sacrificing power.
Energizer, www.energizergenerators.com

The gasoline-powered iQ3500 ($1,449) is quieter and puts out more power than many other generators its size. Its PowerRush technology delivers more than 50% more starting capacity, and electric starting is standard. The Digital Smart LCD panel has a voltage meter, a runtime-remaining display and a gasoline gauge.

The GP3000i ($999) features PowerRush, an economy mode and a PowerDial that combines choke/run/stop settings in a single dial. The GP3500iO ($789) has an open-frame design, a generator status light that alerts for low oil, overload, or when ready to use, and an economy mode that reduces fuel consumption and noise.
Generac, www.generac.com

The gasoline-powered EU1000i ($939; $979 with CO-Minder (which continuously monitors carbon monoxide levels and will shut down the generator if it becomes too high) combines good power with light weight (28.7 pounds). It features a two-tiered noise-dampening system that reduces noise to 50 dBA, and it can run up to 6.8 hours on a tank of gas, depending on load.

The EU2200i ($1,139) puts out more power at lower RPM than the EU2000i it replaces and can run up to 8.1 hours on a tank. It comes with color-coded start-up components, an easier oil fill/drain design and a fuel shut-off valve. The EU3000iS ($2,309) can run most 13,500-Btu rooftop air conditioners, and with its 3.4-gallon tank that runs up to 19.6 hours, it doubles as a home backup unit. By the end of 2020 all Honda portable generators will come with Honda’s CO-Minder carbon monoxide detector system, according to the company.
Honda Power Equipment, www.powerequipment.honda.com

The 2,500-watt gasoline-powered P2500i ($749) can be paralleled to another P2500i for a total output of 5,000 watts. It runs for 10 hours on a gallon of gas at 25% load and is double insulated for quiet operation. It comes with two 5-volt USB ports for charging sensitive electronics and has rubber outlet dust covers. The built-in carry handle makes it easy to move the 48-pound unit, and there’s a rubber mat on the top for storing electronic devices while charging.

The P4500i ($1,098) is RV- and camper-ready with a 30A TT-30R outlet and can be paralleled with another P2500i or P4500i. It weighs 98 pounds and has electric, remote and recoil starting. Its 3.4-gallon fuel tank allows 18 hours of runtime at 25% load, and it comes with wheels and a telescoping handle.
Cummins, www.cummins.com/generators/portable-generators

Yamaha’s gasoline-powered inverter generators range in output from 1,000 watts all the way up to a hefty 6,300 watts. They’re all powered by single-cylinder four-stroke engines with recoil starting and auto decompression except on the EF3000iSEB ($2,469), which has a recoil and electric starting with an optional wireless remote; and the EF4500iSE ($3,399) and EF6300iSDE ($4,099), which have only electric starting with an optional wireless remote. Noise levels range from 47-57 dBA for the EF1000iS ($879) to 58-64 dBA for the EF6300iSDE.

The 2,000-watt EF2000iSv2 ($899), a good balance of output, size and weight, weighs 44 pounds and has a 1.1-gallon gas tank for a 10.5-hour runtime at 25% load. The EF2200iS ($1,099) is parallel-ready. All Yamaha inverter generators come with an oil-warning engine shut-off system and a U.S. Forest Service-approved spark arrestor.
Yamaha, www.yamahamotorsports.com/power-product

Jerry Smith has been a freelance writer for more than 30 years. He’s not picky about the topic as long as it rolls. If it has two, three, four or more wheels, he’ll write about it. He calls Oregon his home, and although he loves it there he takes every opportunity to hit the road and see the rest of the world.