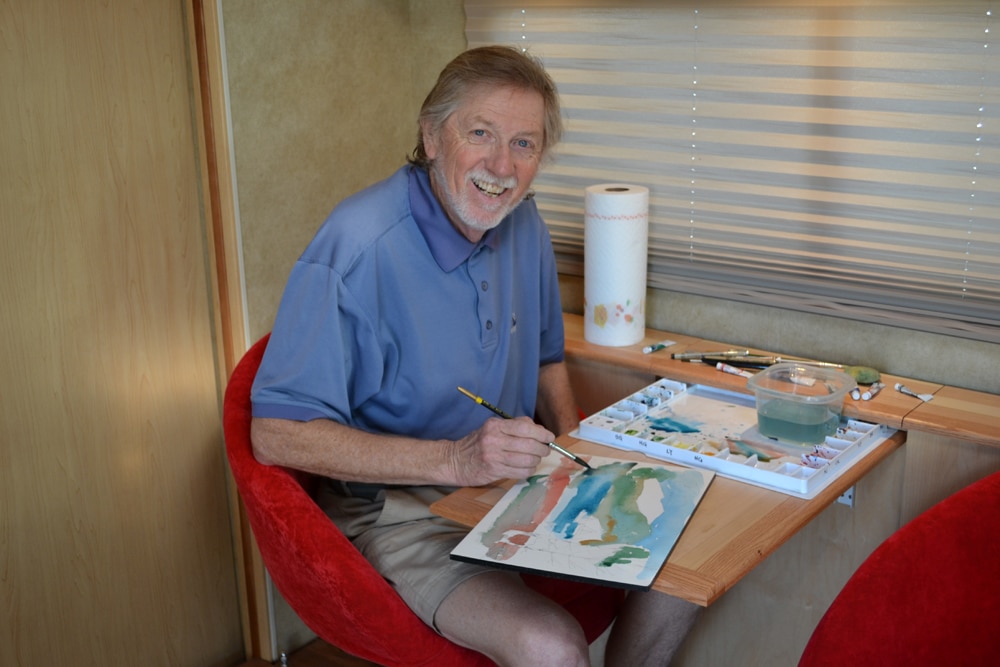 10 Ways to Enrich Your Life While on the Road

In the poem “The Summer Day,” Mary Oliver asks the question, “Tell me, what is it you plan to do with your one wild and precious life?” For many of us, our dreams include traveling the country in a motorhome, and I feel fortunate to do this three to four months a year.

I enjoy the motorhome lifestyle, with its ample opportunities to explore the great outdoors, visit cultural and historical sites, rendezvous with family and friends, and meet interesting people along the way. When my husband, Jim, and I have free time on the road, we pursue hobbies like reading, knitting, working on crossword puzzles, playing cards or listening to audiobooks.

Last winter, several rainy days caused us to cancel a tee time one day and a bike ride the next. We already visited the area’s tourist attractions, and that day my simple hobbies didn’t interest me. Playing computer solitaire was not how I wanted to spend another day of my one wild and precious life.

I wondered what other motorhome-bound travelers did during inclement weather. Call me naive, but I thought RV hobbies had to be simple and compact, but then I talked with other RVers and discovered the creative ways they use their free time. Some pursued their hobbies for pure pleasure; others have found ways to turn these pastimes into profitable ventures.

No matter what their hobbies, the RVers I talked to were passionate about their pursuits. The list of creative and intellectual endeavors was quite lengthy. I hope you enjoy my 10 favorites.

Dave Barber, a retired architect, is naturally artistic. Early in his career – before the advent of computer drafting – he painted renderings of buildings. These days, painting is his rainy day activity when he is on the road. He likes the challenge of capturing a beautiful scene in watercolor. He is particularly interested in water and sky paintings, those beautiful, reflective, transparent moments, which are so difficult to replicate.

Dave likes watercolor because it is quick. “You either get it or you don’t, in which case you start anew. That’s what makes it magic,” he said. According to Barber, the best painting he ever did was horrible the first time. He scrubbed the paper with a rag and painted over it while it was still damp, accidentally achieving great depth and character the second time. That’s why he calls himself an “accidental artist.” Of the hundreds of paintings Dave’s done, most were “for practice, a nice way to say they were not ‘keepers.’” The good ones he keeps, gives as gifts, or sells.

The supplies necessary for watercolor include a small palette, a pad of inexpensive paper, watercolor paints and brushes.

Pat Peterson (seated) has used genealogy to trace her roots to Sweden in the late 1600s. Dorothy Scott has traced her family to 1500s in England.

2. Fill in the Family Tree

Many people are interested in their family history, which accounts for the growing popularity of genealogy. The Internet makes genealogical research much easier. Popular websites include Ancestry.com (requires a subscription to access ancestral records), Familysearch.org (a free website developed by the Church of Jesus Christ of Latterday Saints) and Cyndislist.com (a free website that categorizes and cross-references genealogical resources).

Pat Peterson is a “genealogist on steroids,” according to her friend Dorothy Scott. Pat, who has led a genealogy group since 1997, has traced her roots to Sweden in the late 1600s. Dorothy has traced her family to the 1500s in England. Both women have made trips to Salt Lake City, Utah, to visit the Temple Square Family History Center, which houses the world’s largest genealogical library. The KOA campground in Salt Lake City has a bus that takes visitors to Temple Square. If you go, Pat advised not to plan a trip during any major Mormon events.

All you need to get started is a computer, a guidebook like “Genealogy 101” by Barbara Renick or “Genealogy Online for Dummies” by Matthew Helm and April Leigh Helm, and a three-ring binder to organize the results of your research.

After shooting 20 hours of travel video, John Holod edits it into a 90-minute film.

In our travels, many of us take videos of the picturesque places we visit. To make the footage something we would watch with family and friends – without boring them to tears – consider editing it like the professionals do.

John Holod is a professional documentary filmmaker who owns RV Adventure Videos (www.rvadventurevideos.com). His travel videos make it easier for RVers to experience the same trips. To create a 90-minute film, he’ll shoot 20 hours of video. He researches the area, shoots and edits the film, writes the script, adds music and voice, and corrects the color. John has been a full-timer since 1995, logging 600,000 miles in an RV.

– Use a tripod for shooting video. It’s what separates amateurs from professionals.
– Don’t move the camera more than necessary, and don’t overdo the zoom.
– Edit, edit, edit. Cut down to the very best shots.
– Take notes about the places you film.
– Each image should be on screen four to six seconds. Don’t cut to the next scene too quickly.
– Include close-ups of flowers and wildlife.

To edit your videos, you’ll need video editing software on your computer.

Dean Bjornson uses Rosetta Stone software to study Spanish in advance of a trip to Mexico.

Achieving fluency in a foreign language is on many people’s bucket lists. This multilingualism opens their eyes to other cultures, allowing them to connect to others by speaking their language. It certainly makes travel to foreign countries more enjoyable.

In advance of their trip to Mexico, Dean and Sue Bjornson used Rosetta Stone software to study Spanish. Rosetta Stone teaches by complete immersion in the language. Interactive software allowed them to practice and learn by speaking into their headset, not by studying grammar.

For Sue, this was a refresher since she studied Spanish in high school and college. Dean was completely new to the language. They are looking forward to practicing their new skills when they spend four months south of the border later this year.

Mary Hay, who started beading when she was 87, now teaches classes.

Handcrafted, beaded jewelry runs the gamut from simple strands to complex woven designs and three-dimensional pieces. While jewelry is the most popular application of beading, other items such as purses, coasters and sculptures can be created. You can even incorporate beading into embroidery, crocheting and knitting.

Mary Hay became a beader when she was 87 and said she likes it because it keeps her mind active. Three years later she’s teaching classes. Not only does Mary make jewelry to keep and to give as gifts, she also sells it at craft shows.

After retiring in 2010, Paula Steger learned to make stained glass. In 18 months she finished more than 40 pieces.

When she’s not winning gold medals in pickleball tournaments, Paula Steger makes stained glass. She learned the craft after she retired in 2010. Eighteen months later, she had finished more than 40 pieces. She started with sun catchers and crosses and moved on to picture frames, lamps, stepping stones, jewelry boxes, clocks and picture panels.

One bay in their motorhome is devoted to supplies, which include a grinder, glass cutting grid, foiler, patterns and toolbox with soldering iron, cutters, breakers, and guards to hold cut glass in place.

If you’ve recently received a one-of-a-kind greeting card with unique embellishments, chances are someone made it for you using rubber stamps, ink, paper, beads, ribbons and a big dose of creativity. These are the cards you can’t bear to part with, the ones you save for your refrigerator or desktop. Renee Claytor is a master of making these cards.

Renee’s been stamping for seven years. She likes the creativity of card making, and the “almost instant gratification, unlike some crafts that take days or weeks.” She makes cards for family and friends for all occasions. Renee said, “It’s like giving a little gift each time I send one.” And the paper, embellishments, paper cutter, markers, die-cutting machine, dies, embossing powders and heat gun don’t take up too much space in her RV.

When Bill Becker finds pine and plum branches, saguaro ribs and yucca stems, he uses them to make handcrafted walking sticks and canes. He sells or gives them as gifts. Since walking sticks give hikers additional stability on uneven terrain, these items are most appreciated.

When Bill finds branches, he uses a Dremel tool to remove the bark. Whether he’s working with wood branches or cacti innards, he uses various grades of sand paper to take it from rough to super smooth. With a wood-burning tool, he creates a design, and then finishes the walking stick with raw linseed oil. His wife, Mabel, adds the finishing touches with acrylic craft paint.

Swedish weavers start with monk’s cloth, an even-weave cloth with a loose over-and-under four-strand weave. Yarn is woven through the strands, called floats, with a darning needle to create a pattern.

To begin a project, the cloth must be washed since it can shrink up to 15 percent. Using a small sewing machine Mabel carries in their motorhome, she stitches the edge. The weaving must be done on a flat surface. The technique can be used to make tablecloths, place mats, throws, pillows and numerous other items.

For the last 10 years, knitting has been my personal favorite creative hobby. Now that I’ve given most people on my gift list at least one knitted item, I’ve been knitting for my favorite charity, Genny’s Hope Foundation (www.gennyhope.org). The goal of the foundation is to recruit donors for the bone marrow registry. Financial contributors who enable donors to be put on the registry at no charge are thanked with hand-knitted scarves and shawls.

My efforts, however, pale in comparison to those of Shirley David. She knits and crochets items to sell at craft fairs. While my knitting bag fits snuggly by the passenger’s seat, Shirley’s supplies and finished inventory takes up the back third of the motorcycle trailer they pull behind their motorhome. Her biggest sellers are crocheted pot scrubbers – she’s sold nearly 3,500 in the last five years – and stuffed animals that double as purses.

Thanks to these creative people, I have new ideas on how to spend those quiet days in my one wild and precious life.
Muchas gracias, mis amigos.