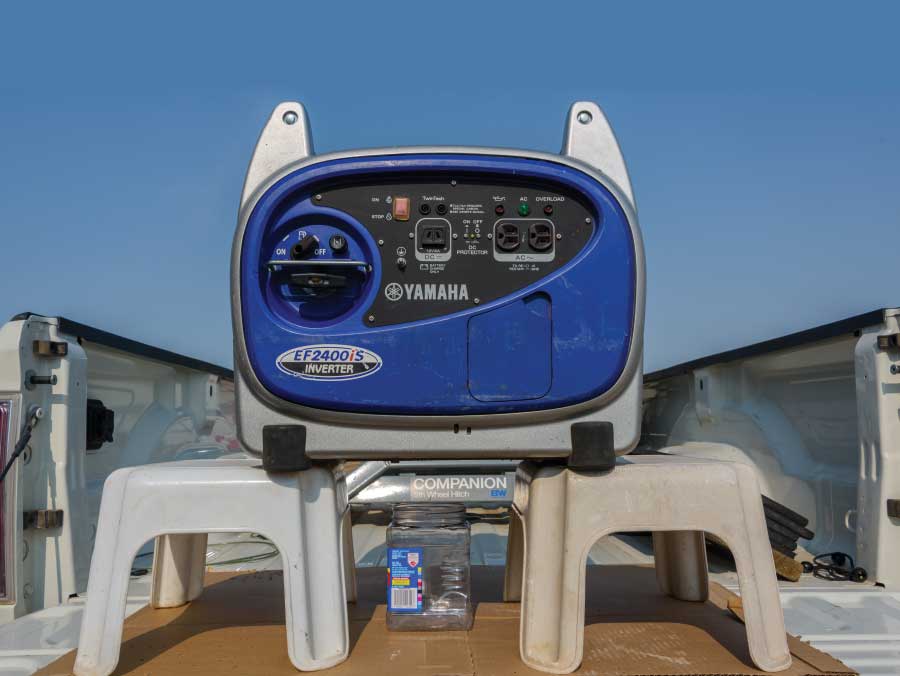 If you enjoy getting away from it all and dry camping in your RV, a portable generator is an important piece of equipment to have on board. Even if you rely on solar power to charge your trailer’s batteries and use a big inverter to power appliances from the battery bank, you’ll likely need a gas-powered generator to keep them charged if you get caught in a days-long winter storm or want to run a power-hungry air conditioner.

Generators serve two purposes for RVers: charging the battery bank and running the 120-volt AC systems and appliances. The size of the generator you choose will depend on whether you plan to use it primarily to charge the batteries or to power things like the microwave, TV, vacuum, and heating and cooling systems. If you use your generator as we do — simply to power an inverter/charger to condition the batteries when solar rays are insufficient — then a smaller generator is adequate. However, if you use it to power the blender and hair dryer while running the air conditioner, a larger generator will be required.
Generators are sized by the watts they produce, and the typical range for portable gas generators for RV use is 1,000 to 3,000 watts or so. Many models can support a parallel-connection cable that will turn a pair of 1,000-watt generators into a 2,000-watt generator, for instance, or two 2,000-watt generators into a 4,000-watt workhorse. This is beneficial to RVers because it is much easier to lift and maneuver two 2,000-watt generators than a single 4,000-watt unit. 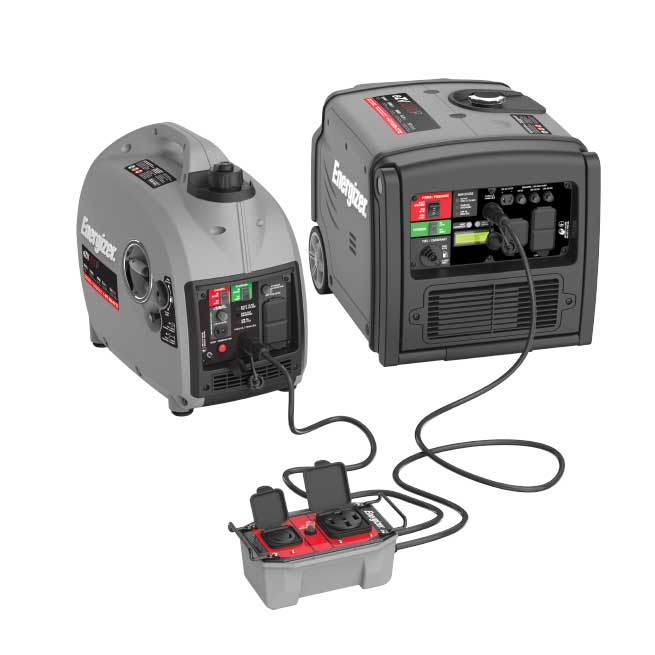 Boost the Power
Many portable generators that are popular with RVers are capable of being connected to another generator from the same manufacturer, thereby increasing the power supply to produce enough energy to start and run large appliances and air conditioners. When connecting two parallel-capable generators, it is important to have the proper parallel cable and follow the manufacturer’s requirements. (Photo courtesy of Energizer Generators.)

Portable generators have two power ratings: starting watts and running watts. The starting (or surge) rating is the maximum wattage the generator can produce for a short burst. This is helpful for starting appliances like power tools and air-conditioning units. The slightly lower running watts (also known as rated watts) is the wattage the generator can provide continuously. This is important for keeping the microwave or blender going for a few minutes or the TV on for a few hours.

Another important consideration with portable generators is noise. Not only is it annoying to run a generator at an otherwise peaceful campsite, it’s also unneighborly to force fellow campers to listen to it. Some destinations regulate the amount of noise a generator can make; national parks restrict generator noise to “60 decibels measured on the A-weighted scale at 50 feet.”

Manufacturers provide decibel specs to quantify the noise factor and help consumers comparison shop. These ratings vary by the percentage of load on the generator (25, 50, 75 and 100 percent load are the most common decibel specifications). When camping, placing the generator away from where you’ll be spending time outdoors and as far as possible from the neighbors’ picnic tables helps reduce the noise impact. Find the “noisy side” of your generator (often the side with the exhaust port) and aim it away from other campers or toward the local shrubbery, which helps absorb the sound. Keep it far enough away to avoid starting any fires, of course.

Storing and carrying a portable generator is another consideration. Lugging a large generator in and out of the bed of the truck or the RV’s storage compartment requires some muscle, and moving it across a campsite can be a two-person job for the heaviest ones. Weight is affected by the size of the gas tank and whether it is full or not.

Fortunately, some of the largest portable generators have wheels. A small generator can be carried on a tray mounted on the trailer’s hitch receiver, and it may be able to operate from that position as well, avoiding the need to move it at all.

Most portable generators designed for RV use are inverter generators. Conventional generators use a gasoline, LP-gas or diesel engine to turn an alternator at around 3,600 rpm to create 60-hertz AC power, which is transmitted directly to the load. An inverter generator first creates alternating current (AC) via a small, high-efficiency alternator. The power is then converted to direct current (DC), where it can be filtered, and then is converted back to pure-sine-wave AC power via an inverter at 120 volts AC in a single phase. 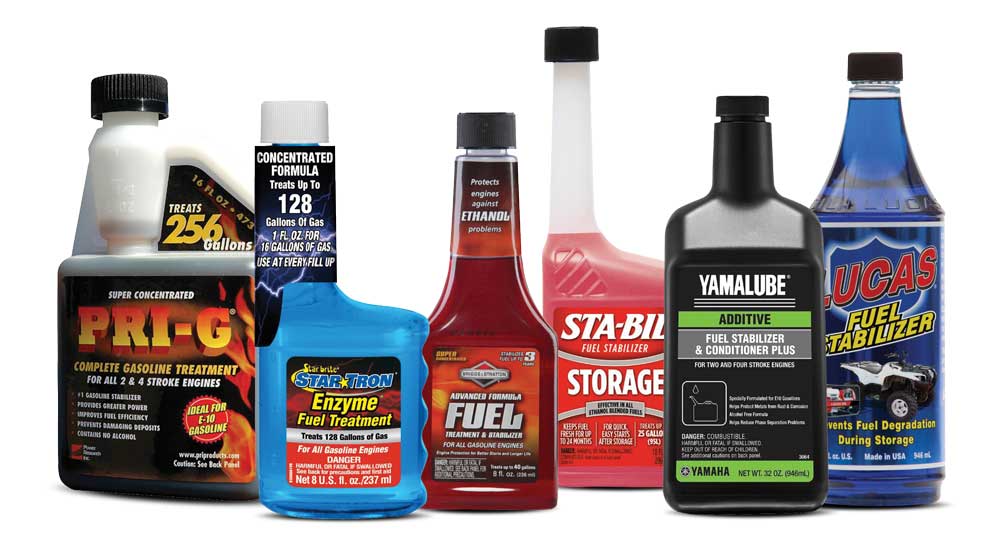 Fuel for the Long Run
Because many portable generators get intermittent use, adding a fuel stabilizer each time the generator’s tank is filled will keep the gasoline fresh. If the gas is mixed with ethanol, adding an ethanol stabilizer will prevent the fuel and water from separating, making it easier to start a generator that has been idle for a month or more. (Photos courtesy of the manufacturers.)

The differences are in the purity of the sine wave and the size, as an inverter generator is limited to 4,000 watts, whereas a standard generator can be as big as 16 kilowatts in the RV world. While both units produce sine-wave AC power at a frequency of 60 hertz, a standard generator, especially a low-quality one, will have some artifact in the sine wave, whereas the inverter power will be filtered and absolutely pure. The purer the sine wave, the better the power is for electronics, at least theoretically. Many RVers have been running sensitive electronics with standard onboard generators for decades.

Another feature that distinguishes the various brands and models of portable generators is the starting mechanism. Most are started manually by pulling a cable-recoil cord, but a few are started electrically by pressing a button. Also, many portable generators do not have a fuel gauge, and for those that do, it is a very simple one. Most portable generators also lack an hour meter to indicate generator usage. Since the frequency of oil changes is based on hours of use, keeping a log of run-time hours or estimating the hours of usage is a good idea.

The length of time the generator can provide power before it runs out of gas is also important. This run time is determined by the size of the fuel tank and the efficiency of the engine plus the amount of load on the generator. Note that run time depends on the load at which the measurements were taken, and that is usually indicated in the generator’s specifications.

Some generators have an “eco mode” that starts with the generator running at idle, then automatically increases its speed and fuel usage depending on the load placed on the unit. This is a tremendous fuel-saving feature. A few generators are dual-fuel models, meaning they can run on gasoline or LP-gas. While gasoline will give a generator a higher maximum-watt rating, using LP-gas in the same dual-fuel generator may allow it to run up to twice as long.

Each make and model of generator has specific maintenance guidelines available from the manufacturer, and these can usually be downloaded from the manufacturer’s website. In general, the essential maintenance items include changing the oil, cleaning or replacing the air filter, and inspecting and replacing the spark plug. We performed these tasks on a Yamaha 2400i inverter generator.

Changing the oil is an easy task that involves opening the cap below the oil reservoir, letting the old oil drain out into a container for disposal, and then using a funnel to pour the new oil into the reservoir. The air filter is generally a small piece of foam, and the hardest part is removing the compartment cover to access the filter. Likewise, reaching the spark plug in the heart of the generator may take some effort. Special tools required for removing and inspecting the spark plug include a spark-plug socket and a feeler gauge to check the gap.