Ponchatoula: The “Strawberry Capital of the World” 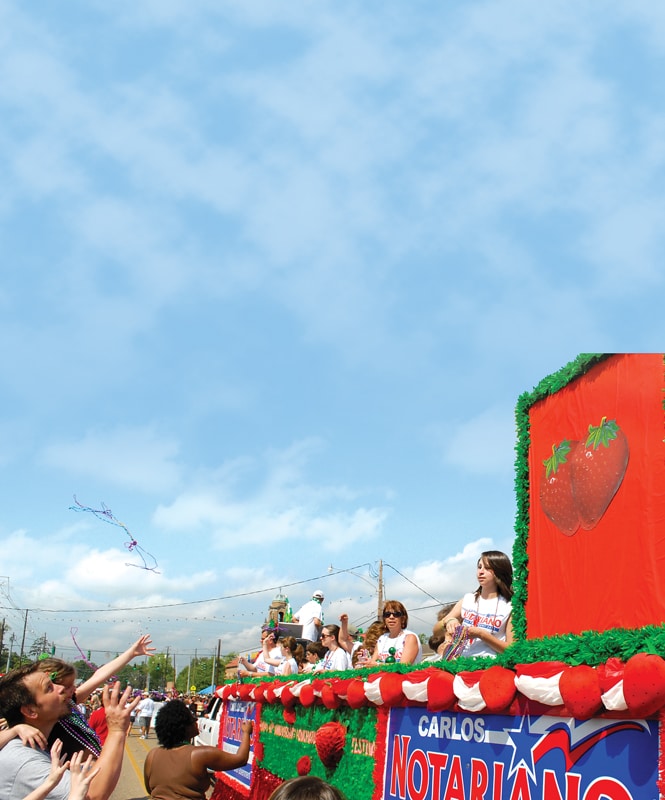 Today, walking or driving along the busy streets of Ponchatoula, Louisiana, where every storefront is filled with a shop or other thriving business, you might be surprised to learn that not long ago this town was primed for oblivion. You’ll be even more amazed if you come in April, in time for the annual Strawberry Festival.

The hugely popular event, running April 13-15, features a family-friendly, Mardi Gras-style parade with a king and queen, carnival rides and game booths, music on two band stages, more than 100 food vendors, and much more. The festival attracts some 350,000 revelers to this town of 6,500, which only a few decades ago was all but down for the count.

You could have fooled us, too, if our recent visit had been our first. But we had been introduced to Ponchatoula – a Choctaw word for “hanging hair,” referring to the gray beards of Spanish moss that hang thick in the trees – right around the time it was reinventing itself as “America’s Antique City.”

Revelers reach for beads as floats parade down Pine Street.

Founded as a railroad town, Ponchatoula was incorporated 150 years ago, just before the start of the Civil War, said unofficial historian Jim Perrin, whose family in 1861 had already been farming here for half a century. Today Perrin, a retired history teacher and school principal, operates the Collinswood School Museum, where local history is displayed in a former schoolhouse.

He said the town became prosperous for its logging and lumber mills, cutting virgin pine, cypress and oak for pickets, barrel staves and ship masts, but that industry came to an end after the “last viable cypress tree in the nearby swamp was cut down.”  A brochure by the Louisiana Cypress Lumber Company noted that in 1955, when the last of the trees were being cut, most trees were between 800 and 2,000 years old.

Strawberries had also been important to the local economy, as hundreds of railroad cars packed with the red berries grown here pulled out of town each spring. But that, too, dwindled after World War II, when young men returning from the war no longer wanted to work at the labor-intensive business of raising and picking strawberries. The annual Strawberry Festival began in 1972, but even that couldn’t stop the town’s decline.

By the late 1980s Pine Street, Ponchatoula’s main thoroughfare where most of the businesses were located, had seen many of its doors close. That’s when a small group of concerned citizens, many of them left with empty buildings, came up with the idea of turning Ponchatoula into an antiques mecca.

The endeavor drew a profusion of antiques stores and related businesses to the downtown area. It was a success beyond their wildest dreams, Perrin said. By the time of our first visit to Ponchatoula in 1993, nearly two dozen antique shops occupied the false-front brick buildings on Pine Street.

We could hardly believe this town almost ceased to exist when now sidewalks, restaurants and shops were packed with visitors, and cars in the steady stream of traffic bore license plates from every state in the Union.

We’ve visited Ponchatoula several times since 1993, but our last trip was right around the three-day 2011 Strawberry Festival. Fewer farmers are growing strawberries these days – only about a dozen in the area – but the succulent red berries continue to be a mainstay of the local economy.

Just about any food that will fit in a deep fryer is available in abundance at the Strawberry Festival.

More To Love
Strawberries and antiques might be excellent reasons to come to Ponchatoula, but the town and surrounding area offer more. This year we came for the Strawberry Festival but arrived three days early to revisit places we’d been in past years and to explore new ones.

Our first stop was the Collinswood Museum, moved here from its original site one mile west and opened as a museum on its centennial in 1976. Much is packed into this former one-room school: 10,000-year-old Native American relics; antique quilts, toys, clothing and others; Civil War, railroad and early farming artifacts; early photos of the town and more. Admission is free.

Across Pine Street the historic railroad depot, the third to stand on the site, has been transformed into Ponchatoula Country Market, where local artisans offer their wares. These include ceramics, photography, stained glass, handmade jewelry, elaborate towel cakes, jams and preserves, pickled quail eggs, and more. Just outside, in a large wire enclosure with a pond, is 9-foot long Old Blue Eyes, the town alligator who also “writes” a column for his local newspaper, the Ponchatoula Times.

We later spent an afternoon checking out the antiques stores, still numerous enough for Ponchatoula to keep its title. These include Boyer Antiques and Doll Shop, C.J.’s Antiques and Collectibles, Mary’s Antiques, Oldies & Goodies, Roussel’s Antique Shop, Acquisitions of the Bygone and Trails End Antiques, all on Pine Street (there are others elsewhere). Near closing time we spent an enjoyable hour chatting with C.J. Scandurro (of C.J.’s) in his cavernous 15,200-square-foot facility, which he purchased in 1993 and today features 40 booths brimming with all sorts of intriguing collectibles.

Ponchatoula’s surrounding area (within a 20-mile radius) also offers much to visitors. We particularly recommend the African-American Heritage Museum in Hammond (new since our last visit), Global Wildlife Center at Folsom, Kliebert’s Turtle and Alligator Farm in Hammond, Amato’s Winery at Independence and Liuzza Produce Farm near Tickfaw.

Critters Are Everywhere
Global Wildlife Center is one of our favorite places. The preserve, the largest facility of its kind in the United States, was founded in 1991 on 900 grassy acres that look remarkably similar to the sparsely treed savannas of East Africa.

“Here visitors are confined [to safari wagons] and the animals roam free,” said founder Ken Matherne. Global Wildlife Center is home to more than 4,000 animals of 30 species from four continents.

Open-sided safari wagons ferry visitors among the animals, including: fallow deer with palmated antlers; 2,000-pound Cape Eland antelopes; reticulated giraffes (the tallest, “Big John,” towers to 23 feet); Pere David’s deer from China (extinct in the wild); black bucks with odd spiral horns from India; American bison; llamas; Sika deer from Japan; rheas from South America; dromedary and Bactrian camels; zebras and many others, though no predators. The animals trot to the safari wagons, poking greedy faces inside to dine on the dry corn visitors offer them in plastic cups. Ninety-minute tours cost $17 for adults, $13 for seniors and $10 for ages 2-11. There’s also an extensive gift shop.

Kliebert’s Turtle and Alligator Farm is another must-see. On this recent visit our guide was T-Mike Kliebert, grandson of Harvey Kliebert, who began the farm in 1957. In 1970, when the animals were placed on the endangered species list, he released thousands into the wild, helping preserve the American alligator.

This giant at Kliebert’s Alligator Farm is 17 feet long and weighs about 1,400 pounds.

The farm still releases gators into the wild, but also harvests their meat and hides. All are the progeny of the 50 male and 200 female alligators Harvey Kliebert hatched out 55 years ago.

The gators live in a natural swamp setting in water crusted with duck weed, which is collected and fed to the 48,000 water turtles – red-eared sliders, yellow-bellied sliders and painted turtles – that are also raised here. Adjacent the gator lake (and close enough that the alligators can sometimes reach) is a bird sanctuary, thick with live oaks, their jade-green boughs polka-dotted white with hundreds of egrets and herons.

Emily McNeely of Ponchatoula is greeted by a Cape Eland antelope during a safari at Global Wildlife Center, which is home to more than 4,000 animals.

Generally, however, the alligators are fed catfish parts, though on this occasion T-Mike tossed out (and even hand fed!) some pork steaks and cut up chicken – stinky with age – just the way the animals like them. Ninety-minute walking tours cost $10 for adults and $5 for ages 2-12.  Kliebert’s also includes a gift shop where gator meat and souvenirs are available.

Don’t Forget The Strawberries
Amato’s Winery, opened by Henry and Jessie Amato in 1993, is another worthwhile stop.

Jessie Amato explained even though the winery offers a variety of wines – peach, cranberry, blueberry, blackberry and orange – most of the 5,000 gallons they produce every year is semi-sweet or sweet wine made from local strawberries. We tasted several, and though all were good, our favorite was the delicately sweet orange wine. Amato’s wine is sold mainly within Louisiana, bottles cost about $7, and are of course available at the annual Strawberry Festival.

Liuzza Produce Farms has been growing strawberries for five generations.

The afternoon before the festival was to begin we visited one of the three Liuzza Produce Farms in the area. This one is run by Kevin, the fifth generation of Liuzzas to grow strawberries and other produce here, and his wife, Elizabeth. She explained that 100 acres of the 400-acre farm are devoted to growing five varieties of strawberries, and in 2010 the farm produced 9.6 million pints.

On this occasion, dozens of workers were bent over in the long green rows picking berries to be sold at the festival; the farm also offers a “you pick” for visitors. More than 1,000 flats would be available fresh at the festival, but strawberries would also be sold as jam, in short cake and dipped in chocolate.

A reveler in full Native American garb entertains onlookers during a parade.

There are marching bands, gymnastics groups turning flips, baton twirlers, modern dance groups from area schools and elaborate floats, one carrying Strawberry Festival royalty. Walking or riding, everyone in the parade is tossing candy and colorful strands of beads. I caught more than 100.

A strawberry auction comes later, followed by strawberry-eating contests, a Strawberry Strut 10K and 1-mile fun run, sack races, an egg toss, carnival rides and much more. The revelry continues throughout Saturday and all day Sunday.