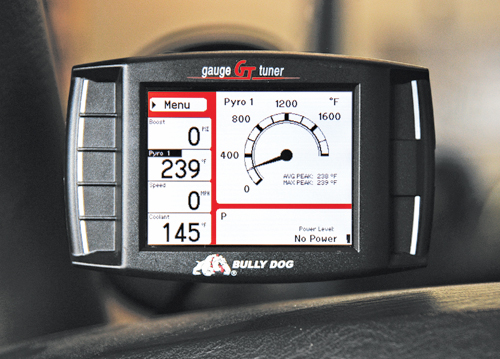 Touring the countryside from bountiful green landscapes to the misty spray along a coastal road creates anticipation of unforeseen adventure every time the road climbs in elevation. Once over the hill with the next long grade approaching, you don’t want the scenery to become secondary because your primary concern is hoping your tow vehicle can make it to the top of the next grade. Yes, even the high-zoot, mega-dollar trucks can still use a little kick in the rear from time to time.

Seeking out more power in a world driven by technology opens the door for a flood of possibilities and options — and finding the newest, latest and greatest isn’t difficult to accomplish. These days, finding the perfect performance enhancer is more about finding the right combination of features, power, ease of installation and use. Of course, there is still one more sought-after ingredient: good old-fashioned brand reputation from a good company. One of those companies, Bully Dog, not only represents high power, torque and quality products, but also takes credit as one of the originators of aftermarket gas and diesel tuners. The latest is the GT Tuner.

Bully Dog’s Triple Dog GT Diesel Gauge/Tuner (model No. 40420) offers a generous array of functions and uses in a small package. The simple touch of a button displays a multitude of menus and screens for controlling and monitoring virtually every engine-management option possible, while adjusting engine power levels.

Your horsepower senses will be expanded by breaking down this device’s capabilities. Right out of the gate, the GT Tuner was developed to add serious horsepower and torque gains via on-the-fly adjustment. These jumps come in the range of 50, 75 and up to more than 120 extra ponies, followed by an immediate torque delivery of up to more than 250 lb-ft added to the stock engine. This is all done by fingertip via capacitive buttons, in three stages titled tow/economy, performance and extreme.

The new power is easily monitored aboard a highly visible yet compact screen, which allows gauging of parameters like exhaust gas temperature (EGT), rpm, intake temperature, speed and economy, to name a few. (Owners of vehicles without a built-in EGT monitor will have to add a probe kit; msrp $159.99). Aside from a monstrous selection of “gauges” to choose from, the display can be customized to suit personal liking, simply by touch. The GT Tuner also gives you the ability to use a driving setting, which can be adjusted to a preferred driving style. Once it’s dialed in, it can then provide a report card as to how well you’ve been driving to reach any pre-configured goal. For instance, if you’re trying to change driving habits for the best fuel economy possible, this feature will be your new best friend.

Installation is a three-part process. Part one involves the hardware installation, which requires that the device be plugged into the OBD II (on board diagnostic) port, which is found under the dashboard on vehicles built after 1996 (and some during the latter part of ’95). A power cable is also routed between the engine compartment at the fuse box and the OBD II adapter, just below the dash.

For the next part, a trip to the auto store was required to retrieve a necessary fuse tap that was, unfortunately, not included. With the appropriate circuit located, the fuse tap is completed and the wire neatly tied up. If you do not know the correct fuse to tap into, make a call to Bully Dog’s free and knowledgeable tech line, and a representative will gladly supply the information you need.

The next step involves locating the windshield mount in an out-of-the-way spot yielding clarity to the screen. Once in place, the main wire harness can be snaked alongside or under the dash to the OBD II adapter.

Part two is the operation and downloading segment. This step requires scrolling through the navigation and Setup Wizard territories to choose the options that best suit your driving styles. Make sure you take the necessary time to prep the truck and play around with the GT Tuner. Remember, there are many points of interest to explore.

The third part is Internet updating. While the GT Tuners come fully packed with information, some makes and models will require an update. The best way to find out what’s out there for your specific truck is to call the Bully Dog tech line.

We installed the Triple Dog GT Diesel Gauge/Tuner in a 2005 Dodge diesel, towing a 25-foot SURV. All tests were performed while towing the 9,000-pound trailer. The first 0-60 mph test required 17.80 seconds, while displaying an EGT of 1,372˚ F before the GT Tuner was installed. After the GT Tuner was installed, the new 0-60 mph time was reduced impressively to 12.8 seconds, while reading an EGT of 1,293˚ F. It doesn’t take a math professor to see that there is a full 5-second decrease in time, along with a reduction of more than 100˚ F off the EGT.

Our mileage consisted of two trips at 141.9 miles each. At the end of the stock test we recorded a consumption rate of 11.33 mpg. After implementing the GT Tuner, the truck’s mileage was only slightly reduced at 11.26 mpg, which was to be expected. Look at it as getting up the hill faster without additional fuel expense. The mileage tests were performed in the tow/economy setting.

Triple Dog GT Tuner ($699.99 for the diesel gauge we installed; $469.99 for the gas gauge) was very pleasing overall. Not only did it provide that needed spare kick while towing, it also smoothed out the power band, supplying quicker and harder turbo spooling whenever it’s needed or wanted. I thoroughly enjoyed the working range of the GT Tuner while towing and driving solo — and tackling the grades. The ability to monitor systems and conditions is just icing on the cake.