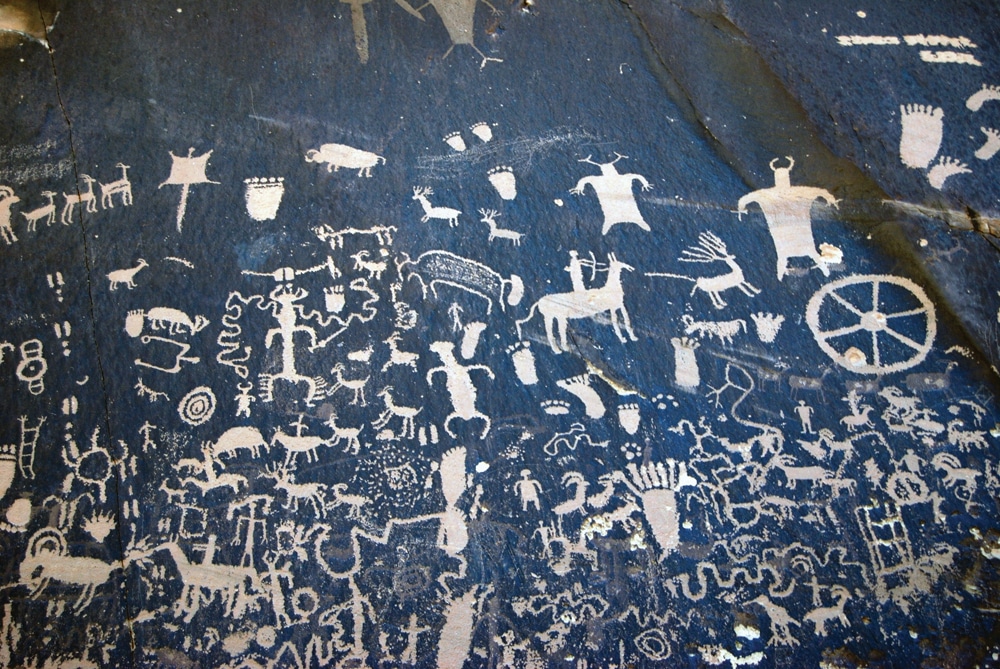 We love the Southwest,” my brother said when I told him over lunch that my husband, Bob, and I were planning our first cross-country motorhome trip to the Four Corners region. “You should visit the Crow Canyon Archaeological Center near Cortez, Colo. We’ve gone on digs there,” he said. “Be on the lookout for petroglyphs as you travel,” my sister-in-law added.

We already planned a month’s worth of RV sites in private and National Park Service (NPS) campgrounds, but were intrigued enough to register for Crow Canyon’s Archaeological Day Tour and add a day to our itinerary. I was woefully ignorant about a region I knew only from reading novels like Nevada Barr’s Ill Wind and Tony Hillerman’s A Thief of Time.

After a 2,200-mile drive from the East Coast, we pulled into Sundance RV Park in Cortez, Colo. It is close to Crow Canyon and Mesa Verde, and offers full hookups, a laundry room and shady sites suitable for motorhomes much larger than our Class B Leisure Travel Vans Free Spirit.

The next morning, we set off for Crow Canyon’s 170-acre campus and met educator Josie Chang-Order in a classroom where she introduced our group of four to the basics of Southwestern archaeology. Josie invited us to hold and identify potsherds, tools and other artifacts left behind by the ancestral Pueblo Indians, sometimes called the Anasazi. After a tour of the lab, we hopped in her van to visit an excavation in progress a few miles away where archaeologists and volunteers were digging at a site dating from the Basketmaker III period (A.D. 500-750), one of six Pueblo periods we studied that morning.

At the end of our one-day immersion, I was hooked, fascinated by the ancestral Puebloans and their mysteries. After toiling to build complex cliff dwellings, why did they decide to leave this area in the 13th century? We headed to Mesa Verde National Park to see their magnificent construction projects up close.

After arranging for a tour through NPS concessionaire Aramark, we spent the night at Morefield Campground and met our driver-guide the next morning at the campground store. As he navigated the park’s winding roads in a minivan for the next six hours, Mike gave us insight into the lives of the Pueblo people who lived in Mesa Verde (Spanish for green table) from A.D. 600 to 1300. We hiked along dirt trails to mesa-top village sites and paused to see a spiral petroglyph, perhaps a solar calendar, inscribed into the masonry at Pipe Shrine House. Mike explained the difference between petroglyphs (images pecked or incised on rock surfaces) and pictographs (images painted on the rocks).

After a look at the Chapin Mesa Museum’s artifacts, we descended 100 feet via a footpath to Mesa Verde’s best-preserved cliff dwelling, Spruce Tree House, where 60 to 80 people once lived. Was it drought, crop failure or warfare that led these Puebloans to abandon their homes and migrate to today’s Arizona and New Mexico? Even archaeologists continue to ponder these mysteries.

Eager to learn more, we set out the next day for Blanding, Utah, and the Edge of the Cedars State Park, known to contain one of the most extensive collections of ancestral Puebloan pottery in the Southwest. I was thrilled by the museum’s cases filled with baskets, pots, tools and personal objects like gambling dice, sandals, ornaments and feather blankets – even a rare, bright red and blue sash made from macaw feathers in A.D. 1150.

Out the back door of the museum, I walked through the partially excavated ruins of a Pueblo and great kiva that were abandoned around A.D. 1225. Returning inside, I noticed the “Spirit Window” panels painted on walls throughout the museum that represent actual petroglyph and pictograph sites, many that were submerged when Lake Powell was created by construction of Glen Canyon Dam in the 1950s.

The next morning’s agenda again included rock art as we drove north on U.S. Highway 191 and turned west on state Highway 211 into Indian Creek Canyon. We parked at Newspaper Rock, a national and state historical site, and joined others gazing up at the rock face coated with “desert varnish,” the red-brown layer made of clay minerals and oxides of manganese and iron. We walked closer to admire petroglyphs, some believed to be 2,000 years old. Images of people, birds, animals, snakes and human footprint patterns filled the 24-foot-long panel.

We continued west to enter the Needles district of Canyonlands National Park and found a campsite open at the small but scenic Squaw Flat Campground. Squaw Flat does not have hookups, but bathrooms and water are available. A park ranger stopped by to invite us to a talk that evening about cowboys who settled this area. Ranger Alice told us that a short hike on the Cave Spring Trail would lead us to a 19th century cowboy camp and prehistoric rock art. As we walked the next morning into the cave with its seeping spring, we spotted our first pictograph: a red image of a standing figure on the rock wall.

A half-day raft trip on the Colorado River leads to petroglyphs on the bank beneath the massive walls of Glen Canyon.

Bob drove us north to Moab, where we spent five days exploring Arches National Park, Dead Horse Point State Park and the Island in the Sky district of Canyonlands. Below Arches on Highway 191, we turned left onto Route 279, the Potash-Lower Colorado River Scenic Byway, and followed the road along the river. At small “Indian Writing” signs, we parked and craned our necks to see petroglyphs scratched high into the cliff walls.

Back on the road, while visiting Capitol Reef National Park, we again encountered rock art unexpectedly amid the sandstone domes and orchards of state Highway 24 along the Fremont River. We used park service-provided viewing scopes to study petroglyphs left on the canyon walls by Fremont Indians, the earliest inhabitants of this lovely valley. I realized again how easy it could be for anyone to enjoy examples of rock art along well-paved roads that any motorhome could navigate.

For the next 10 days, we gloried in the scenery of Bryce Canyon, Zion and Grand Canyon national parks before turning back north to Page, Ariz. We settled in at Wahweap, a campground on the shore of Lake Powell with facilities for motorhomes of all sizes. While cruising through the lake’s red rock canyons on a half-day boat tour, I thought about the petroglyph treasures now hidden forever beneath the still waters.

After touring the Glen Canyon Dam inside and out, we decided to view it from below, too, on a guided raft tour down the Colorado River 15 miles from the dam to Lees Ferry. We rode a bus to the base of the dam through a two-mile access tunnel and boarded our motorized pontoon rafts. The highlight of an afternoon spent floating on calm waters through towering canyons came when the guide pulled over to a beach. We walked up to the cliff face to see petroglyphs carved by Puebloan or Fremont Indians who had lived in Glen Canyon.

A fisherman who carved his name in Glen Canyon’s “Descending Sheep” panel was caught and fined $10,000.

Our guide explained that the “Descending Sheep” panel we were viewing had been defaced recently by a fisherman who, when caught, told a ranger that he thought it would be “cool” to carve his name there. After pleading guilty to one felony violation of the Archaeological Resources Protection Act, he was fined $10,000 in restitution to cover repairs. Vandalism like this has been all too common throughout the Southwest, our guide said. Park rangers also must contend with people who ignore the rules and proceed to touch, trace or make rubbings of rock art, discoloring and wearing it away.

We drove south, turned east on Interstate 40 and stopped at Homolovi State Park in Winslow, Ariz., for the night. This park has a modern campground and most sites (back-in and pull-through) have electric hookups and water. The park’s easy trails led us through archaeological sites scattered with pottery shards, 14th century pueblos that were once home to ancestors of the present-day Hopi people. The next morning, we hiked the half-mile Tsu’ Vo Loop Trail between twin buttes to see the park’s ancient milling stone areas and petroglyphs.

The final entry on our itinerary brought back childhood memories; we both remembered touring Petrified Forest National Park with our parents. On this trip, after pausing to revisit the giant logs and the Painted Desert Inn historic landmark, we pulled over at this park’s version of “Newspaper Rock” to view petroglyphs below through spotting scopes on an overlook. We drove to nearby Puerco Pueblo, a 100-room pueblo built around A.D. 1250, and walked a short trail to see our last petroglyphs of the summer. The pecks and scratches, one of a long-legged bird with a creature in its beak, fascinated me again as they had throughout our wonderful journey.

As we climbed back in the motorhome to head home, I began making a list of must-see places for our next trip west – Canyon de Chelly National Monument, Chaco Culture National Historical Park, Hovenweep National Monument and so many more – to satisfy our new-found interest. We had barely scratched the surface of archaeological wonders the Four Corners holds.