Anyone who knows their way around a grill can cook a pretty decent steak. All it takes is a good cut from the supermarket, some salt and pepper, and a gas or charcoal grill. But have you ever noticed that your results are never quite the same as what you can get at one of the nation’s best steak houses? It’s not only because they’re better cooks than you are; it’s because they don’t use a grill as you and I know it. In fact, they don’t use one at all.

The Otto grill is small, but mighty. Made by hand in Germany, it weighs in at almost 50 pounds and features a 304 stainless-steel chassis.

The typical home grill has a peak temperature of about 500–600 degrees Fahrenheit, which, as it turns out, isn’t anywhere near hot enough to get professional results. High-end steak houses employ specially made broilers that ratchet up the heat to 1,500 degrees Fahrenheit or more. Why so hot? You’ve probably noticed that perfect brown crust you get at your favorite steak house — the one that locks in the juices and makes each bite perfection. This is achieved through what is known as the Maillard reaction, which, simply put, is the reaction between amino acids and reducing sugars in the meat, which melt together when subjected to high temperatures. Technically, the Maillard reaction begins at 285 degrees Fahrenheit, easily within reach of typical gas or charcoal grill. But there are two other reasons your grill can’t compete: It uses flame underneath the cooking surface that can cause flare-ups and uneven heat, and it cooks via convection (high temperature air rising from the heat source), which has a tendency to dry the meat out. By contrast, a high-temperature steak house broiler applies high heat from above the meat, which initiates the Maillard reaction within seconds. And, because the fat can’t drip down onto the heat source, there are no flare-ups. Just a perfect, deep brown crust every time.

As a cooking enthusiast for more than 20 years, I’ve known all this for a while — and if you’re serious about steak, you probably have, too. But what I didn’t know until recently is that there is a home appliance specifically designed to achieve legendary steak house results right at your home or RV patio. It’s called the Otto Grill, and once you’ve tried it you may never cook steaks on your home grill again.

The brainchild of German engineer Otto Wilde (pronounced Wilda), the Otto Grill is a “consumerized” version of the equipment world-class steak houses use, in a footprint that’s about the same size as your average countertop microwave oven. That makes it portable enough to take with you in the RV — and it’s fueled by your typical 20-pound (5-gallon) propane cylinder. The Otto Grill employs two ceramic “Over Fire Burners” (OFBs) above the cast-iron cooking grate, operated via individual burner controls. The burners are fired individually by turning the respective control knob to the highest position, holding it down, then pressing the ignitor button. When one burner is lit, you repeat the process with the other burner. In just 3 minutes, the grill is at 1,500 degrees Fahrenheit. Needless to say, you shouldn’t stick your face in front of the Otto while attempting to light it, unless you’re no longer fond of your eyebrows. The flame is difficult to see at first, especially during the daytime — but you will hear it. And after about 1 minute, the OFBs begin to glow orange.

The Otto Grill has some smart features that make cooking easy. First is the dual function “Clever Lever,” which is used to insert/remove the cooking grate from the Otto. Once the meat is loaded (it will accommodate two large rib eyes, or one obscenely large porterhouse), the same lever is then used to operate the “Meat-O-Meter,” which allows the cook to control how close the cooking grate is to the OFBs. Setting 5 is farthest away, 1 is right in the flame. A nice detail is that the Meat-O-Meter is equipped with a “brake” located on the back of the unit that allows the user to adjust resistance. For example, you may not want any resistance if all you want to do is raise the grate close to the OFBs for a quick sear, but may want more resistance if you’ve put on a couple of heavy steaks and you want them to stay in a specific height.

The Meat-O-Meter lets the user gauge how close the food is to the burners. Setting 5 is all the way to the bottom, 1 is directly in the flame. To operate it, the end of the Clever Lever is inserted into the silver slot in the knob.

To try the Otto Grill out for ourselves, we settled on a beautiful 1-pound, grass-fed Oregon rib eye from the local meat purveyor. Before grilling, it’s important to remember that this isn’t an ordinary grill that you heat up and throw the steaks on — there’s a procedure to follow here.

On the first use, or any time the propane supply hose is disconnected/reconnected, Otto recommends conducting a leak check using soapy water (or that popular blue glass cleaner) to check for telltale bubbles. Once that’s done, the drip tray beneath the grill grate is filled with about half an inch of water, which prevents possible flare-ups. Next, the grill grate is removed using the Clever Lever (which gives you a chance to practice before it’s hot), and the steak(s) placed on it. With all conditions met, I fired up both burners at full whack and set timer for 3 minutes, still doubtful that would be enough time to reach peak temperature. Within 1 minute, the water in the drip tray some 6 inches below began to steam, and fingers of orange flame could be seen curling their way out of the Otto’s opening. The whole process was quite a spectacle.

Preheating the Otto takes just 3 minutes. After about a minute, the ceramic burners will begin to glow orange.

After 3 minutes were up, I carefully loaded the grill grate into the Otto and used the Clever Lever to raise the Meat-O-Meter to position 3. Within seconds, the surface of the meat began to get shiny, then started to sizzle fervently. Two minutes later, I couldn’t believe that the steak was already a perfect golden brown. I lowered the grate all the way, used the Clever Lever to pull it about halfway out, then gave the steak a quick turn with a pair of tongs. Back in, up to level 3 for two more minutes.

After letting the meat rest for about 5 minutes, I cut into a perfect medium-rare steak that was as juicy as any I’ve ever had. What was interesting to note was that, after resting, there was almost no juice on the plate as there normally would be after grilling in the traditional manner. The high temperature sears the surface so quickly, it literally locks the juices in. The result is that satisfying roasted-meat flavor combined with buttery richness of the fat — certainly one of the best steaks I’ve eaten.

Once the Otto has preheated, place the steak(s) on the cast-iron grate and load into the Otto using the Clever Lever.

I should mention that, while the Otto can cook any steak (or even chicken, fish and veggies), you should reserve it for the best you can get in order to enjoy a world-class steak house experience; otherwise it’s kinda like using a Ferrari to run errands. If there are no good meat markets nearby, the good news is that there are a number of high-end meat purveyors online, including Pat LaFrieda, that will ship fresh (not frozen) dry-aged USDA Prime cuts directly to you. 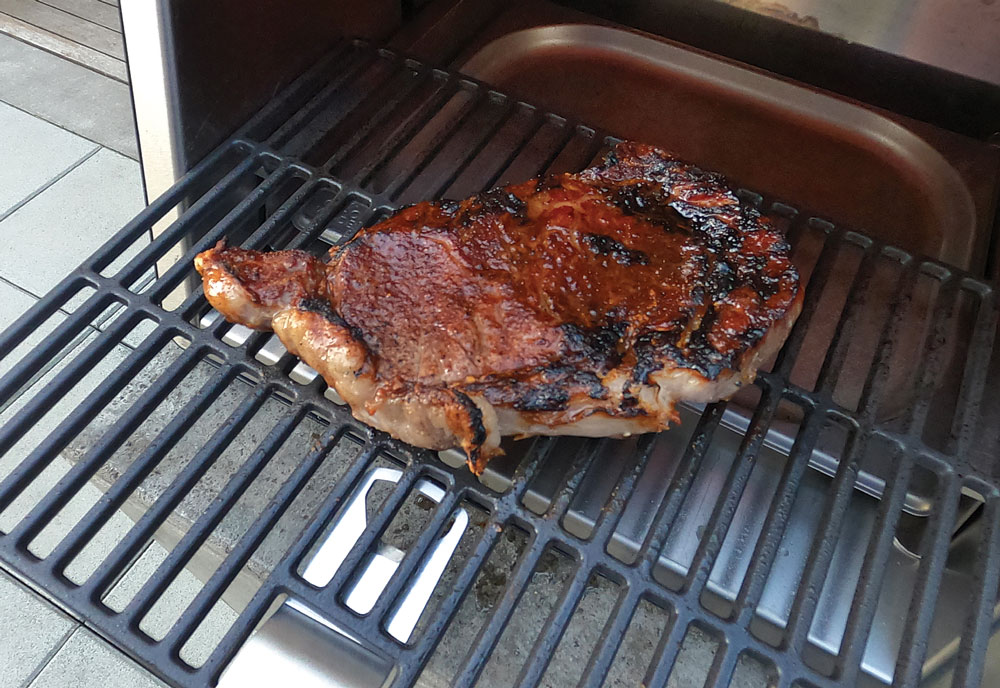 A 1-inch-thick steak like this rib eye takes about 2 minutes per side. Otto recommends using a lower setting on the Meat-O-Meter and an internal temperature gauge when cooking thicker cuts like a tomahawk rib eye.

At $999 MSRP (at press time), the Otto Grill isn’t exactly cheap, but if you really want to secure bragging rights for the best steak in your neighborhood (or campsite or RV park) it’s the way to go.