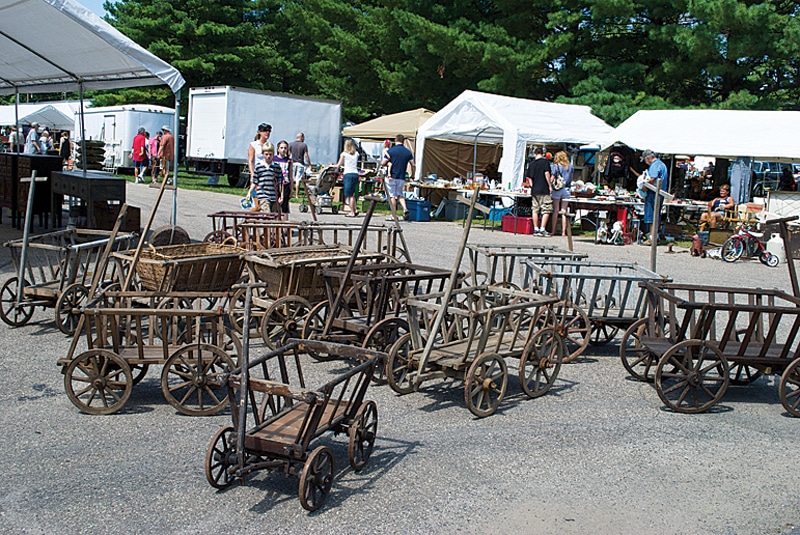 Antiques have caused my husband, Guy, and I, to while away many enjoyable hours over the years at shows and auctions, but never until just recently had we seen anything on the scale of Gold Rush Days. It turns the entire town of Oronoco, Minn., located in the southeast corner of the state with a population of 1,000, into a bustling antique Mecca. The canvas shelters over many of the antique booths set up in the grid of streets create a virtual tent city.

Not every vendor was selling antiques. For instance, Robert Foley from Galena, Ill. pulled a flatbed trailer here packed tightly with a host of weighty life-size (some of them larger than life) die-cast animals, giraffes, bears, roosters and elephants.

Nearly as numerous were the food booths offering all sorts of fair delights: fish and chips, crab fritters, shish-kabobs, cheese curds and lemonade among others.

Downtown Oronoco Gold Rush Days was first held in 1972 and although some of the antiques are rings, bracelets and other fine jewelry, the object of Gold Rush Days is to attract many people interested in yesterday’s artifacts to the town by hosting an enormous antique show, one of the biggest anywhere.

Rustic 1890s farm wagons were some of the antique gems.

Steve Mohlke and his wife Evelyn, manage 40-acre Oronoco Park which offers RV camping, explained that in the late 1850s gold was discovered in an oxbow of the Zumbro River about 4 miles downstream from the town, prompting a small-scale gold rush at the time. However, the scores of prospectors who poured in from around the country hoping to strike it rich back then don’t compare to the 350,000 visitors who flood into this tiny town every year seeking treasure of a different sort.

During the annual three-day Gold Rush, which takes place this August 17-19, Oronoco’s roads are for the most part open only to the throngs of pedestrians who wander from booth to booth. Event Coordinator Carol Olson said there are about 1,200 booths and 400 vendors, as many of them rent more than one booth.

One of thousands of rare, pristine antiques at the Gold Rush.

“The show hasn’t always been so enormous,” explained Mary Lou Berg. Along with her husband, Earl, the Bergs opened Berg’s Antiques 48 years ago in what had been a general store, an antique itself, built at Main Street and Minnesota Avenue in 1912. She moved here from northern Minn. in 1959 to enroll in a nurse training program at the Mayo Clinic in nearby Rochester.

The cavernous building, including the lower level along the Zumbro River, is packed floor-to-ceiling with antiques. A tavern called Sunken Heaven, a speakeasy that opened during the Prohibition and stayed in operation for several decades after it ended, occupied the lower level, Berg said. In 1972, hoping to generate some interest in antiques in Oronoco, the Bergs invited 38 antique dealers from Rochester to set up for the first show.

Oronoco’s annual Gold Rush event provides funding for other events throughout the year. In some years as much as $90,000 is raised by selling old treasures at the fair.

“The response was better than we could have dreamed,” Berg said with a smile. “All the dealers had to go home for more.” The number of dealers doubled in 1973, the year the show was christened “Gold Rush Days.” From there, the numbers of dealers and visitors who now come from all over the country continued to snowball.

Six years after founding the show, the Bergs handed over organizing it to antique dealers Joyce and Ole Fuchs. It flourished until 1987, when the bridge that led into town over the Zumbro was closed for nine months.

Once a year Oronoco, Minn. turns into a bustling antique mecca.

In 1988, the Oronoco show was revived. To distinguish it from the similar event to the south it was officially renamed Downtown Oronoco Gold Rush Days.

A committee of nine people now organizes Oronoco’s Gold Rush, and all of the proceeds from the show go to benefit the town.

“I’m not an antiquer but [volunteering] is just what our town does,” Berg said. “We do it for the joy of giving back to the community. Gold Rush is the only event I’m aware of that provides funding for other events.” Among these are the fireworks for the town’s Fourth of July celebrations, and a complimentary dinner and games for the annual National Night Out at Oronoco Park, which takes place the first Tuesday in August.

Gold Rush, which some years raises as much as $90,000 for the town, also provides funding for the fire department, children’s park, senior citizen community center, VFW, churches and also nearby Pine Island Home Health Care, which serves an area that includes Oronoco.

The 40-acre Oronoco park offers RV camping — but no hookups during the sale.

Mohlke says it’s “the many volunteers who make the show such a success.” And adds that visitors should not miss Oronoco’s other great attraction, the giant basswood tree known as Moose, which stands at the west end of the park he has managed for the last 40 years. The 70-foot-tall behemoth, nominated as the biggest basswood in Minn., features a trio of “moose heads” on the trunk, massive burls that sprout from it like ruminant-gorgons.

Mohlke told us that a certified arborist determined that the historic tree was a seedling in 1854. And that the tree is so large that if it were possible to gain access to the “column decay inside the five-foot-diameter trunk, four people could sit down around a three-foot-wide table at ground level and have lunch!”

Our last stop in Oronoco was to visit long-time resident Barbara Smallbrock, who moved here from Pine Island at age 20 in 1942. Smallbrook is proud of her town’s past and heads up the local history center. She’s a big Gold Rush supporter, and helped organize the event in those early days. She was Oronoco’s postmistress for 42 years, retiring in 1987, and for years the post office was in her home.

Now, during Gold Rush Days, Smallbrock, wearing a straw hat, sits in the sunshine outside her home, just north of the bridge into town on a main thoroughfare, chatting with customers who examine the few dozen antiques she offers for sale. Her black dachshund, Tramp, sits nearby, and eagerly trots off with a friend who comes to walk him. Inside the house, protected from the sun are the more valuable items. Smallbrock offers a large assortment of antique dolls for sale. All proceeds benefit Safe Haven, an animal shelter in Rochester, she says.

Smallbrock told us, “I love the quiet, the peacefulness of Oronoco.” Nonetheless, of Gold Rush, which every year briefly transforms the tiny town into a booming metropolis, she insists, “I’m all for it!”

For local travel desinations and more, pick up the June issue of MotorHome Magazine on newsstands, or subscribe today!