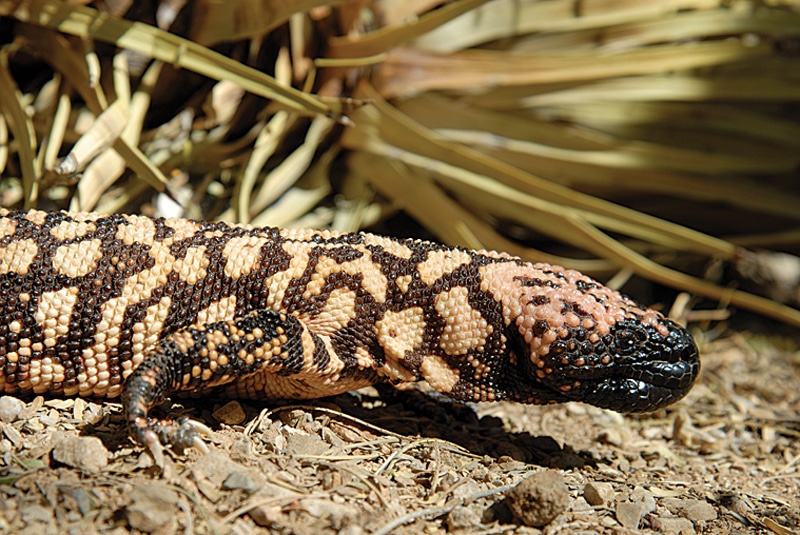 Its austere beauty stretches for 30 miles along the Arizona-Mexico border, its desert wilderness covering more than 300,000 acres.

We are in Organ Pipe Cactus National Monument, a portion of one of our nation’s four magnificent desert areas. It was created in part because this sweep of desert land is the only place in the United States where you can find Stenocereus thurberi, the organ pipe, growing naturally. The monument also protects, among other things, the historic and lovely Quitobaquito springs and pond, the very area we were visiting.

The Gila monster, the nation’s only poisonous lizard, makes its home in the Sonoran Desert and throughout Organ Pipe Cactus National Monument.

This region, with its own natural wonders and hazards – spiny cacti, scorpions, Gila monsters, rattlesnakes – invites visitors to see through the thorns and appreciate its amazing offerings. Surrounded by its seeming harshness, we sought to find out what compels so many to return to Organ Pipe Cactus National Monument.

My wife, Janie, and I began our most recent explorations of this well-preserved section of the Sonoran Desert by docking at Twin Peaks Campground, one of the nation’s most beautiful. Trails surround this complex of several hundred sites, and if you follow one located just a little to the west of the campground to a high point, you can look down on your motorhome, engulfed in beautiful features. What you are seeing is one of the nation’s best examples of “the Goldilocks of all deserts.”

From this vantage you can also look south to the Cubabi Mountains, about five miles away in Mexico. Turning toward the north, you’ll see the lofty, jagged Ajo Mountains. Focus a little closer and you’ll see an abundance of saguaro cactus and organ pipe. If you linger, you’ll probably find some of the riveting creatures that make this assemblage their home.

These brightly colored blooms are those of a buckhorn cholla shrub, abundant in the Sonoran Desert.

To learn more about the complexities of this park, start by biking or driving the two miles to the Kris Eggle Visitor Center, named for the 28-year-old National Park ranger who was killed at the monument in 2002 by members of a drug cartel.

Organ Pipe continues to address the illegal entrants and smugglers crossing the U.S.-Mexico border, but park officials are determined to provide visitors with adventures, not misadventures. They say most areas of Organ Pipe are safe, and for starters they suggest the Ajo Mountain Drive, a 21-mile dirt road departing about 100 yards from the visitor center.

We left early in the morning and spent almost the entire day exploring features of the drive. Essentially, the old road and interpretive signs celebrate the Sonoran Desert, telling of the plant communities and the geology that helped render these hills appropriate for specific types of vegetation. At times the road is steep, not made for nighttime visits. It is, however, perfect for those who want to explore on their own some more of this desert’s quiet beauty. Certainly the drive refreshed our minds about the beauty of the Sonoran.

Along the drive, panels explain the organ pipe cactus, which differs from the saguaro (also abundant) because its many branches rise from the base at the ground instead of growing straight, as does the saguaro’s massive trunk. The species does, however, share in common a series of vertically aligned pleats, which enable the plants to expand and contract in accordance with the amount of available water.

At mile seven the road climbs deeper into the Ajo Mountains, providing commanding views of Mount Ajo, which at 4,808 feet is the highest point in the monument. Eleven miles later we peered over the rugged cliff known as Diaz Spire. In spots the slopes appear impassible, and when we read a band of Native Americans once sought shelter in its small caves we were awed, for we could see the harsh features through our binoculars.

Once, members of the Tohono O’odham Nation camped in these caves while harvesting the fruit of various cacti. Today, these people live on the nearby and contiguous Tohono O’odham Reservation, and members still harvest the fruit of the saguaro and the organ pipe. They also make detailed baskets, and on various days display them at the Kris Eggle Visitor Center. It was at the visitor center that we met Matilda Saraficio, a talented basket maker whose product is so exquisite we had to buy one. Made of devil’s claw, yucca and bear grass, the basket is a work of art. 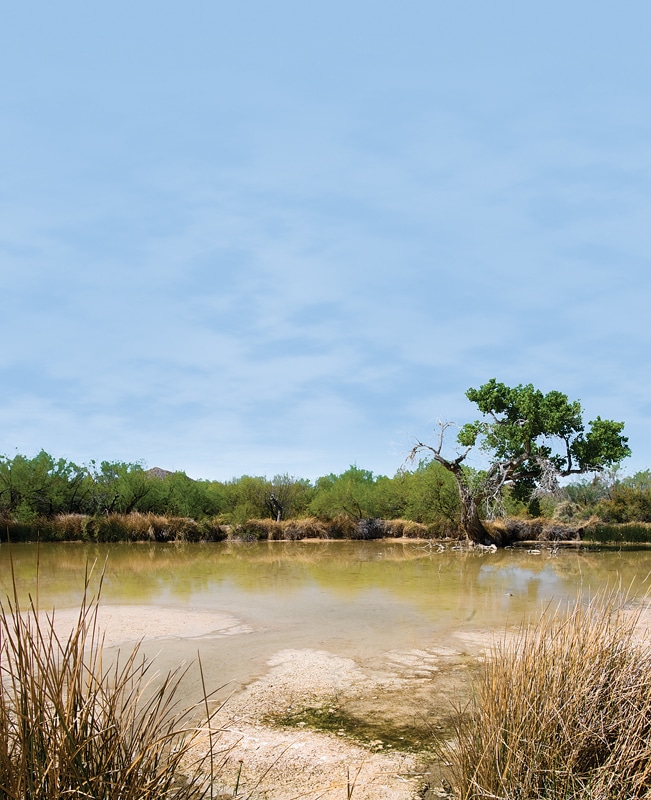 The springs of Quitobaquito have been used for centuries, first by Native Americans, then the Spanish and later by ranchers. They’re also a sanctuary for an endangered species of pup fish.

To read on about Bert’s adventures in the park, pick up the July issue of MotorHome Magazine on newsstands, or subscribe today!