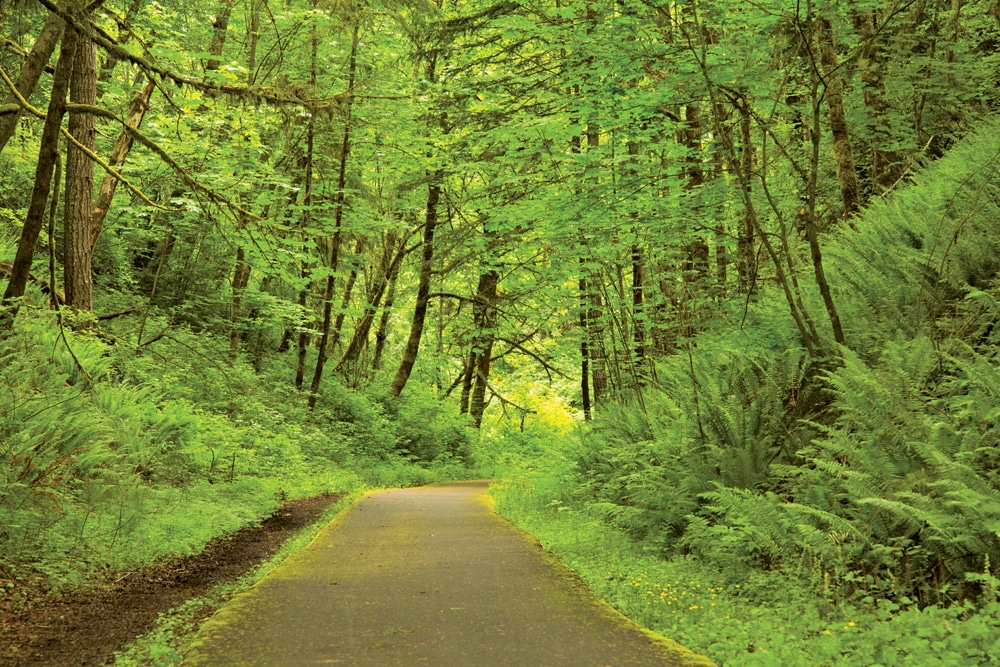 During our nation’s current hard times, dark messages of budget cuts and closures for parks fill the news. But in Oregon, a light still shines.

Oregon has maintained an excellent park system, but, perhaps because of that excellence, for 30 years Oregon parks had entered a deep sleep. That’s why, in 2004, Oregon’s then-governor Ted Kulongoski proposed a Park-a-Year initiative. The commitment held, and now eight new parks, with a ninth in the wings, grace the state, a treasure trove for local and visiting travelers.

This new roster adds to the state’s natural, cultural, historical and recreational offerings. The recently opened and soon-to-open parks sit near travel hot spots, familiar routes and established park campgrounds; a couple boast campgrounds of their own. The parks celebrate farm and timber history, along with Lewis and Clark and the Nez Perce Native Americans. You’ll find a 16-mile wild stretch of John Day River and a creek-threaded teeming coastal marsh. There are tiny properties and sweeping expanses.

At a time when vacation monies are stretched and families need accessible outdoor places, Oregon’s new parks have arrived just in time. Meet the Oregon eight – plus one.

Stub Stewart State Park, in the coastal mountains just 30 minutes west of Portland, Ore., is the flagship park of this ambitious undertaking. The nearly 1,700-acre park sits in a second-growth temperate Douglas fir rainforest and gives nod to the timber industry that long supported the state.

Disc golf also entertains travelers while birders train their focus on hummingbirds, warblers, towhees, juncos, hawks and more. Elk and deer, too, may be spied. Because this is a temperate rain forest, you’ll find periods of cool damp weather, a small price for the lush greenery.

Two full-service family campgrounds and an equestrian camp serve overnighters. Sites are 50 feet maximum. The park sits equidistant between Portland and the coast, so it serves as a fine travel base. From U.S. 26, 12 miles west of Hillsboro, turn north on Oregon 47, drive four miles, and turn right entering the park.

With its opening tied to the Lewis and Clark bicentennial, this trailhead and beach access on the northern coast marks the sea terminus of the explorers’ Fort to Sea Trail. The Discovery Corps wintered on the Oregon coast at Fort Clatsop, south of Astoria, from 1805-1806, and in preparing for the return east made forays to the coast to salvage oil from a beached whale, to harvest salt for preserving and to hunt for food.

A second ADA trail across the Clatsop dune plain, leads to a beach overlook. Beach driving and combing, clamming and surf fishing further engage guests. Fort Stevens State Park, to the north, as well as private campgrounds from Seaside to Astoria, serves overnighters. The park has ample paved parking and a toilet facility.

From U.S. 101, 12.4 miles north of its junction with U.S. 26, turn west on Sunset Lane, continue about a mile more to enter the trailhead parking lot on the right. Beach drivers can continue forward onto the sand.

In the north-central Coast Range, on a historic Native American trail between the coast and the trade centers in the Willamette Valley, this park commemorates the military fort that kept peace between the settlers and the reservation Native Americans from 1856-1866.

This hilltop-vantage park has paved parking, toilet facilities and an interpretive trail touring the fort site. Signs identify the lay of the fort’s some 20 buildings and reveal the perspectives of officers, enlisted men and the Native Americans they protected and watched. Visitors learn about the tedium, isolation and hardship and about the reservation system, with its inherent flaws. Philip Sheridan of Civil War fame once resided here.

The park sits close to the confederated tribes’ longhouse and powwow grounds and Spirit Mountain Casino, with camping at or near the casino and along the coast. Occasionally, in the summer, visitors can view re-enactments or witness archaeological digs at the park. Plans call for ghost structures to represent the fort. An officer’s quarters is the lone surviving structure.

The park sits east off Oregon 22, one mile north of Oregon 18/22 at Valley Junction.

Thompson’s Mill sits along a diversion of the Calapooia River.

In the heart of the Willamette Valley west of Interstate 5, this well-preserved flour mill salutes the farmer and milled product that sustained rural family life. On a diversion of the Calapooia River, this grain mill holds Oregon’s oldest water rights. Self-guided tours of the grounds and guided tours of the mill and mill office explain the process, history and cultural significance of the community mill to the American fabric. Milling’s heyday came at a time of daily fresh-baked bread, sack-cloth curtains and dresses, and family meals. But, the rise of cities, commercial bakeries and women in the workplace ultimately spelled the end for such mills.

Thompson’s Mills is a worthwhile, picturesque stop for a couple of hours. Public and private campgrounds along I-5 serve motorhomers.

From the community of Shedd on Oregon 99E (south of Albany and west of I-5), go one mile east on Boston Mill Drive to the park. It has ample paved parking and toilet facilities.

On the southern coast, just over the California border, this gateway park welcomes with its visitor center, beach access and Winchuck River estuarine habitat. The park occupies the site of the northernmost village and fishing grounds of the Tolowa tribe and traces its name to a pre-World War II lily grower. Crissey Field is a terminus for the 362-mile Oregon Coast Trail. Beach views stretch from Point St. George in California to Cape Sebastian in Oregon. Birding is popular and harbor seals and sea lions may animate the coastal water.

The park is west off U.S. 101, five miles south of Brookings, where public and private camping is available. There is ample RV parking.

In eastern Oregon’s famous Wallowa Lake country, this park salutes the homeland of the Nez Perce tribe and occupies the open space adjacent to Old Chief Joseph’s grave. Trails carry you across and over the rolling dry-grass terrain, past shaded waters. This is a quiet natural park for self-led discovery, a place of red fox and muledeer, dabbler and frog, big mountain vistas and wild western sunsets.

Developed camping is available at Wallowa Lake State Park and Joseph-vicinity private campgrounds. Rustic experiences can be had at U.S. Forest Service campgrounds.

Reach the park off Oregon 82 at the south end of Joseph, one mile north of Wallowa Lake.

Roosevelt elk, deer, beaver and, on occasion, black bear and cougar can or have been spied. Mostly, though, it’s the peaceful two-mile paddle that engages visitors. In summer, South Beach State Park (to the north, which also has camping) offers guided kayak tours here, supplying full gear for the outing.

In the Blue Mountains of eastern Oregon, this park offers camping and a lineup of recreation on the site of a former timber mill and the company town it spawned. This new park still has a few rough edges, but its campground (28 sites, no hookups), covered picnic shelter, millpond and marked network of trails are open to explore. Interpretive boards (more to be added) introduce the timber mill and industry and life in the company town. The mill operated from 1917-1975.

The park sits at the intersection of Middle Fork Lane (CR 20) and Oregon 7 (Journey Through Time Scenic Byway), one mile north of U.S. 26 at Austin Junction. Sumpter Dredge and Railroad are area historical destinations, Malheur National Forest adjoins the park, and bicycling is growing in popularity. The park is on the TransAmerica Bicycle Trail.

At this writing, in the arid high plain of north-central Oregon’s John Day Country, the newest park is taking shape. It incorporates the old Murtha Ranch, spans both sides of the river and stretches in both directions from Cottonwood Bridge on Oregon 206. Its gargantuan size (8,000-plus acres) requires a time commitment that will stretch more than a decade. But, Chris Havel, Oregon Parks and Recreation spokesman, places the projected opening after the initial phase of development, in late 2013.

The adjacent Bureau of Land Management boat launch is among the most popular in the state and boasts bass record-setting fishing. The landscapes are rugged, majestic, big and bold. Old ranch roads guide exploration along the river and in the canyon. This is a park to watch as it grows. Although areas will be developed for camping and day use, the wildness of the area will remain intact.

Reach the park on Oregon 206, 15 miles south of Wasco at Cottonwood Bridge.

Mark your map, get ready to explore and watch these parks burgeon into maturity. For more information, contact Oregon Parks and Recreation at 800-551-6949 or www.oregon.gov/OPRD/parks.