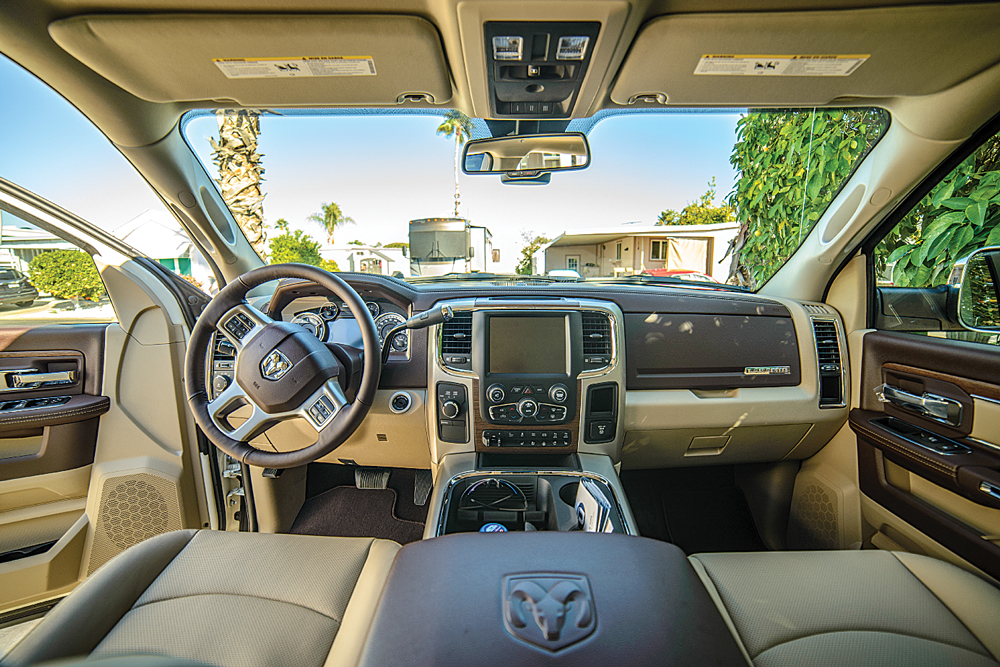 Shopping for a new diesel truck to tow a heavy trailer? Before investing in your next set of wheels, consider all the angles

Choosing the right vehicle to tow a trailer is vital for both safety and comfort on the road, especially if the trailer is a heavy fifth-wheel. When my husband, Mark, and I started shopping for a new one-ton truck to replace our 2007 Dodge Ram 3500, we visited more than 20 Ford, Ram and GMC/Chevy dealerships across the country. We logged more than 200 miles of test drives, as we narrowed the field of heavy-duty domestic diesels to tow not only our current 14,000-pound fifth-wheel but a much heavier one in the future. Reading the marketing literature, scouring online forums, and talking with salesmen and truck owners, we learned a lot about the features that make a heavy-duty truck a true towing machine.

Our first decision was whether to buy a shortbed truck, which typically has a 6½-foot-long cargo area behind the cab, or stick with an 8-foot longbed. Longbed trucks can haul more and bigger items than shortbeds, but shortbed trucks can fit into smaller parking spaces. Plus, a shortbed truck’s shorter wheelbase makes it easier to do U-turns and other driving maneuvers in tight spaces.

However, because the kingpin on a fifth-wheel is positioned over the rear axle of the truck, a shortbed runs the risk of hitting the overhang of the fifth-wheel with the back of the pickup cab when making tight turns. Sliding fifth-wheel hitches alleviate this problem, and some fifth-wheel manufacturers make the front ends of their trailers concave or pointed so the cab and trailer cannot meet except under extreme driving circumstances.

We tow our NuWa HitchHiker II more than 100 miles every week and did not want to change trailers to one with a front cap designed for shortbed trucks. We also didn’t want to limit our choice of fifth-wheel hitches or reduce truck-bed storage or payload. So we came to the conclusion that a longbed was the right choice for us. For RVers whose truck is their daily driver and who tow less frequently, the shortbed might be the way to go.

We also needed to decide on the size and style of the truck cab. Standard two-door cabs have a single row of seats with little or no space behind them. Extended cabs add some space behind the seats. Crew cabs come with four full-size doors and roomy rear seats.

We rely on the back seat of our truck for hauling everything from groceries to laundry, so we focused our attention on crew cabs. Ram has an even larger style on some of its heavy-duty pickups, but the 2016 Mega Cab models are not available with a longbed, so that was off the table for us. 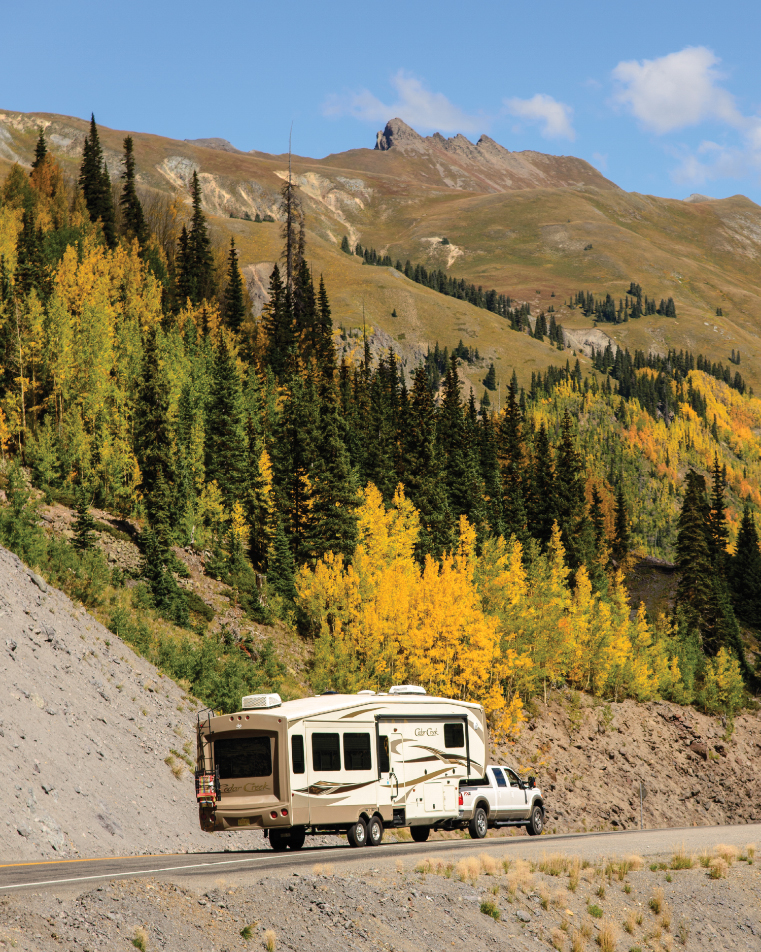 Four-wheel drive makes it easier to tow a heavy trailer up steep inclines.

The next big decision was single rear wheels (SRW) or dual rear wheels (DRW). A DRW truck, also known as a dually, has a wider stance and is more stable towing through crosswinds than an SRW truck. It can also carry a heavier payload, allowing for a larger fifth-wheel trailer that has a heavier pin weight. Perhaps most importantly, a dually is safer if there is a blowout on a rear tire.

The disadvantages are that it is easier to bump or accidentally drive the rear wheels up on a curb, and you run the risk of clipping the rear fender at tollbooths and drive-up windows. Duallies can also struggle on two-track dirt roads with deep ruts, as the two pairs of rear wheels may be too wide to fit in the ruts.

We already had trouble doing tight turns in our SRW longbed and were concerned that a dually would have a larger turning radius. However, after many test drives, which included doing lots of doughnuts in parking lots, we determined that the dually longbed is no less maneuverable than an SRW longbed, because the overall length and wheelbase are the same. We would have to park in the back of parking lots whether we bought a DRW or an SRW.

Another important consideration was two-wheel drive (2WD) versus four-wheel drive (4WD). In our full-time RV lifestyle, we spend a lot of time on North America’s public lands, exploring nature on remote gravel and two-track roads. A 4WD truck makes off-road towing much easier and opens up the possibility of driving (without the trailer) on roads that are not passable with a 2WD vehicle.

When towing a big trailer, a 4WD truck provides an even more important capability on access roads with steep inclines. We learned this on a gnarly single-lane mountain road in Utah where the grades were as steep as 13 percent. Putting our 3500 in 4WD low gear, we were able to creep down the mountain safely at 5 to 10 mph, relying on the combination of the gearing and the exhaust brake to slow us down, even though our 14,000-pound house was pushing from behind. Amazingly, Mark never had to touch the service brakes on the 6-mile descent.

The rear-axle gear ratio is a very important specification when it comes to the towing capacity of a truck. The rear-axle ratio is often expressed as just the first part of the ratio — for instance, 4.10. Of course, the actual ratio is 4.10:1 and refers to how many times the pinion gear (connected to the driveshaft) must turn to rotate the rear wheels one revolution. For example, a 3.42:1 rear axle requires the driveshaft to turn 3.42 times for the rear wheels to rotate one revolution.

So, with a 4.10:1 rear-axle ratio, the driveshaft spins more quickly at a given speed (the rate of the truck’s wheel rotation) than it does with a 3.42:1. This results in three things. First, a truck with a 4.10:1 rear-axle ratio will get a heavy tow load moving more easily than one with a 3.42:1 and can ultimately haul heavier trailers. Second, the engine will rev higher at all driving speeds, whether the truck and trailer are starting at a standstill, are slowly climbing a mountain or are passing another vehicle on the highway. Third, a truck with a 4.10:1 rear axle will be less fuel-efficient because the engine will turn faster and burn more fuel. 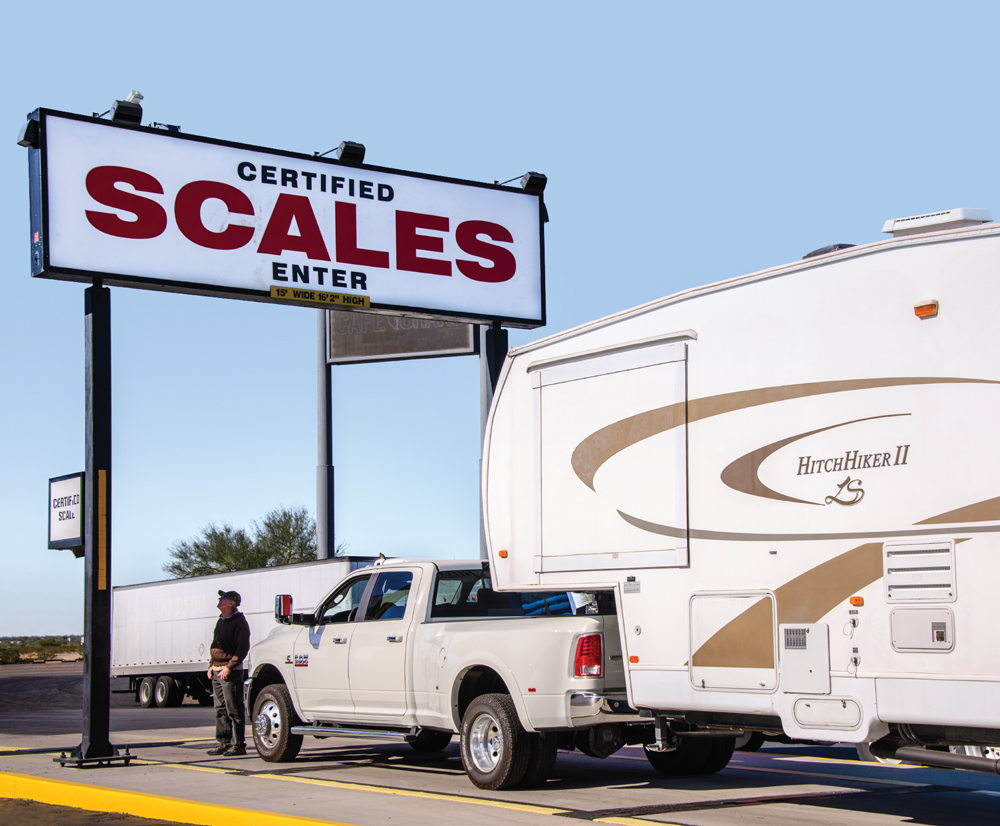 Another consideration when selecting the rear-axle ratio is the predominant type of driving the truck will be doing. The vast majority of our driving and towing is on secondary roads that have speed limits of 45 to 60 mph and are often hilly. On the few occasions that we tow on an interstate, we rarely exceed 65 mph.

Our 2007 truck had a 3.73:1 rear axle and a six-speed automatic transmission, and we found the engine tended to lug and rev too low at speeds between 40 and 65 mph. Mark frequently used manual override to select a lower gear to keep the engine in its power band of 1,800 to 2,300 rpm.

In test drives of new Ram trucks with the 4.10:1 rear axle, we found the new Aisin AS69RC transmission operated at a higher rpm at every speed than our old truck, making it a good option for our driving habits. For RVers who tow lighter trailers and drive the truck solo primarily on interstates at highway speeds up to 75 mph, a 3.42:1 or 3.73:1 rear axle may be preferable.

Torque is a measure of the force it takes to rotate the wheels and indicates a truck’s ability to pull hard at a low rpm. Horsepower measures the torque available at each rpm. The maximum horsepower rating indicates how fast a truck can accelerate at high rpm — for instance, when passing another vehicle. Both are important considerations when choosing a heavy-duty truck for towing.

The 6.7-liter Cummins in the Ram 3500 is an inline six-cylinder turbo diesel used throughout the commercial trucking industry. Paired with the Aisin AS69RC transmission, the high-output (H.O.) version has the highest torque rating among the 2016 diesel pickups, 900 lb-ft at 1,700 rpm, measured at the crankshaft. The H.O. engine also generates 385 horsepower at 2,800 rpm.

While all of the domestic one-ton trucks are powerful tow vehicles, the reliability of the Cummins engine, its high torque rating and our generally positive experience towing with our 2007 Dodge Ram ultimately swayed us to choose a 2016 Ram 3500 Laramie 4WD crew cab longbed dually with the Aisin transmission and 4.10:1 rear axle. With these options, our truck can tow a 30,130-pound trailer and a payload capacity of 5,680 pounds. It also has a gross combined weight rating (gcwr) of up to 39,100 pounds.

To equip our new heavy-duty towing machine, we chose the puck-style hitch mounts that allow a matched fifth-wheel hitch to be installed or removed from the bed of the truck simply by turning four levers and lifting it in or out. This eliminates the need for permanent hitch rails in the bed.

The exhaust brake built into the turbo on the Cummins engine has two modes, one for maximum braking power and the other to maintain a given speed on descents. We also ordered the new auto-leveling suspension that uses air bags to raise and lower the rear end of the truck slightly, similar to a semitrailer. And we opted for two cameras, the standard backup camera on the rear bumper and an optional cargo camera aimed at the bed of the truck.

The Ram also comes with an elaborate electronic-data center that provides everything from satellite radio to GPS navigation to independent-seat climate control. With heated and vented leather seats, and a heated steering wheel, our new truck is not only powerful but is also a comfortable and elegant ride.

Available with single or dual real wheels in four cab choices, including the roomy Mega Cab, the heavy-duty Ram 3500 offers a high-output Cummins turbo-diesel engine paired with the Aisin AS69RC transmission to generate best-in-class towing and torque for hauling heavy trailers. The smart diesel exhaust brake allows for less aggressive use of service brakes and increased stability on descents, and the new three-link front suspension contributes to a more cushioned ride when towing.

Stay Tuned for the 2017 Super Duty

Choosing a new truck is a really important step for safe and enjoyable RVing. Later this year, Trailer Life will be doing a full test of the highly anticipated 2017 Ford Super Duty. The all-new design features a heavy-duty boxed frame and aluminum-alloy body, making the truck the most advanced yet, according to Ford.