On The Waterfront: Exploring The Oregon Coast 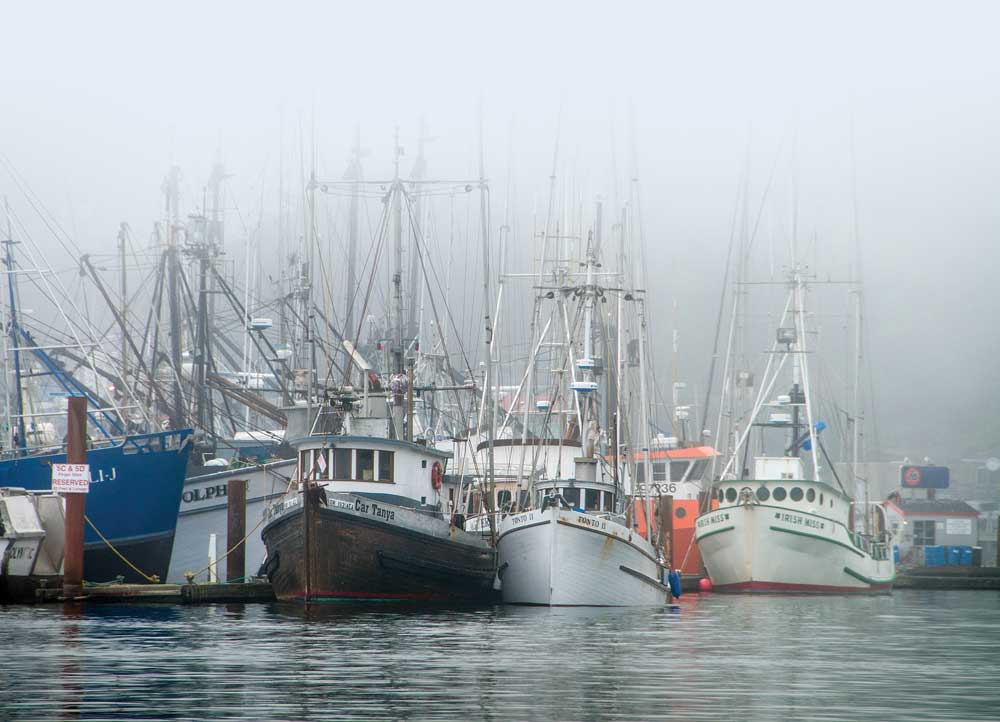 Finding the riches, and discovering the richness, of Oregon’s coastal communities

Whether it was shipping, fishing, timbering, canning or farming, Oregon’s coastal communities grew up around natural bounty and backbreaking labor, long hours, danger, hardship and punishing elements. Over time, changes in taste, supply and markets have forced communities to reinvent themselves. For many that has meant adding tourism — all good for modern travelers because the romance of early industry lives on in this region, and is especially enjoyable when paired with the comforts of today.

Fishing boats such as these in Newport Marina are a common site along the coastal drive.

From north to south, six communities — Astoria, Garibaldi, Pacific City, Newport, Florence and Coos Bay — capture the magic of the past while catering to the present, but many others will beckon you aside. U.S. Highway 101 is the thread that unites. All six communities sit near fine campgrounds, private and public, with recreation at the doorstep.

What a View:
The coastal drive from Astoria south to Coos Bay is approximately 230 miles, and would take more than five hours driving straight through. Allow plenty of time to enjoy the scenery and, of course, to sample each of the unique communities.

At the mouth of the Columbia River, the first permanent American settlement west of the Mississippi boasts a rich history. The story scrolls around the town’s famous 125-foot Astoria Column atop Coxcomb Hill — a more engaging history you’d be hard pressed to find. Clatsop Indian villagers, explorers, fur traders, sea captains and fishermen all contribute to the story. Cannery workers added a later chapter.

Much of early Astoria sat on pilings. In its heyday, 30 canneries stretched over the lapping waters of the Columbia River, whose bounty propelled Astoria to the salmon-canning capital of the world. Nordic and Chinese workers filled early employment roles. Women were a force until Bumble Bee Seafoods closed in 1980.

Decay, fire and modern growth have all but erased the once-booming enterprise, but three museums keep the story alive. Hanthorn Cannery Museum, housed in an old run of cannery freezer bays, is like a rummage through Astoria’s attic, with an authentic look at cannery life and the voice of workers on its autographed Cannery Workers Memorial Hallway. The Columbia River Maritime Museum offers a polished presentation of all aspects maritime, including canneries. And, the Clatsop County Historical Society’s Heritage Museum, in Old City Hall, explores life and lifestyle in early Astoria, including cannery work, a notorious red-light district and artifacts related to the Chinese.

At nearby Fort Stevens State Park, the shipwreck skeleton of the Peter Iredale recalls the dangers of early seagoing. The park’s enormous campground (174 full-hookup sites and 302 partial-hookup sites) is ideal for area stays, with ample recreation and its own historical discovery related to America’s coastal defenses. 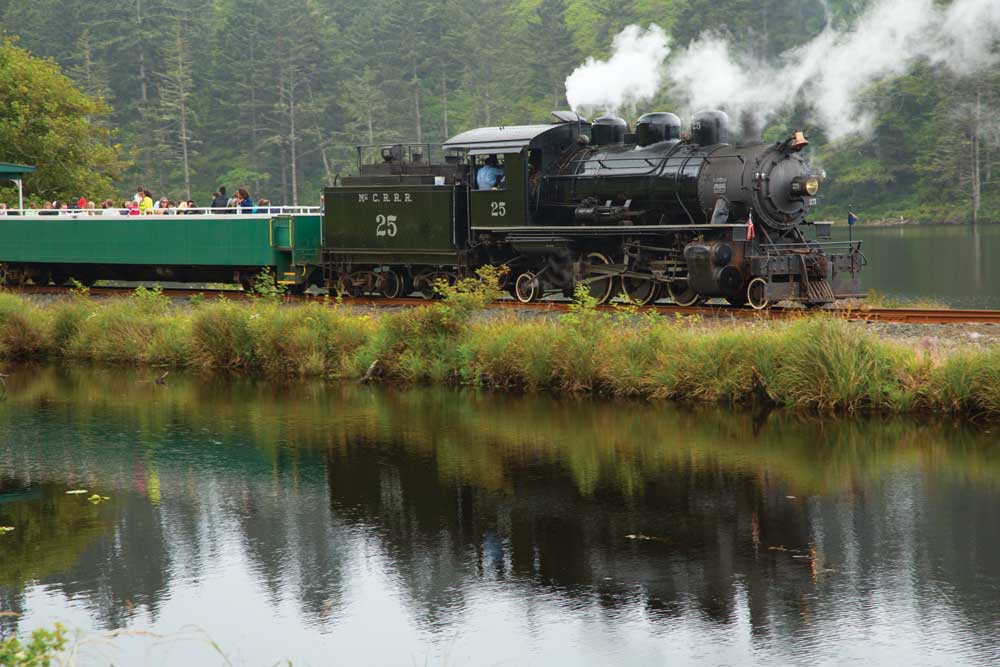 The Oregon Coast Scenic Railroad lives up to its name while transporting visitors between Garibaldi and Rockaway Beach along tracks that once ran timber in the area.

Tucked into the hillside at the north end of Tillamook Bay, Garibaldi remains a rustic, rolled-sleeves fishing village, supported by commercial and sport fishing. A skyline smokestack with an unsettled future recalls a not-too-distant past, when a lumber mill coughed smoke, provided jobs and fueled the economy. Today, wood products play a much-reduced role.

Between Garibaldi and Rockaway Beach, a tourist steam train, the Oregon Coast Scenic Railroad, runs on tracks that once transported timber. Experience the train’s rattle, whistle and blue smoke. Find the statue of Captain Robert Gray and you find the town’s Maritime Museum.

As with most fishing villages, bringing in the sea’s bounty was not without cost. A solemn Coast Guard Memorial sits at the port. Each Memorial Day weekend, townspeople and guests gather at the Memorial for the Blessing of the Fleet. 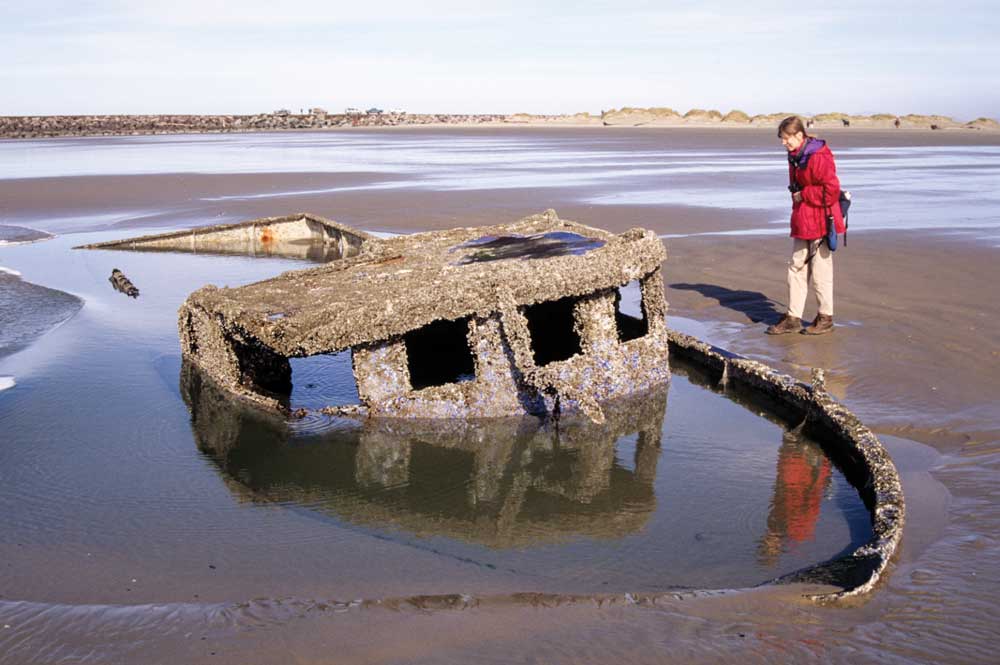 The author surveys the remains of a fishing vessel at South Beach State Park in Newport.

On productive Nestucca Bay, Pacific City grew up around salmon fishing, with the local salmon cannery turning out 12,000 cans a year. Other enterprises included timber and dairy. When bay salmon populations declined, the town looked to the sea. Enter the dory fleet.

The surf-launched, flat-bottomed boats allowed townspeople to ocean fish for salmon, and in its heyday hundreds of the crafts, aided by horse or motorized vehicle, launched from the sands. Today, dories used for recreation and charters keep the tradition alive. On occasion and during Dory Days (July 19-21, 2019), look for them near Cape Kiwanda, fighting out to sea or storming in on the surf. Horns sound the speedy returns. Beach use is segregated to give boats a clear course.

Another Dory Days attraction is the oaring of the Double Enders (two-pointed boats) in the near-shore surf. The event is weather-dependent. Parking can be chaotic, so dinghy vehicles are recommended. 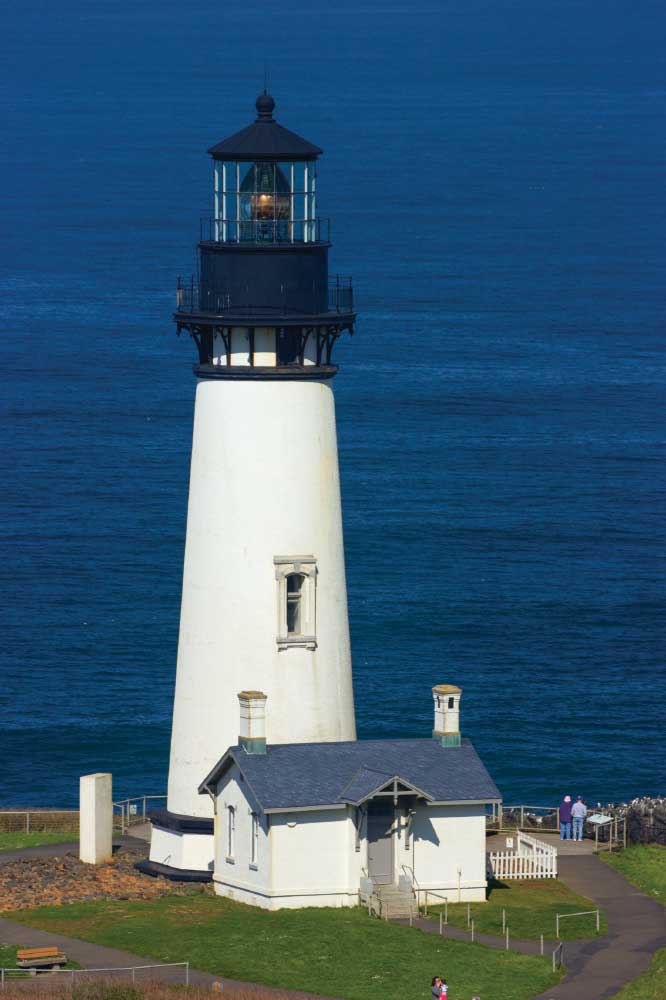 Yaquina Head Lighthouse is one of two lighthouses (along with Yaquina Bay’s eponymous structure to the south) in the Newport area.

Pacific City’s ocean, river and bay access have called since the Willamette Valley’s settlement. The sandy spit at Bob Straub State Park erases cares, as do the cinnamon rolls, local brews and plates of seafood. Today, Pacific City defines itself as a “gentrified” vacation and living spot.

On Yaquina Bay, Newport is perhaps the most completely married of old and new. Its waterfront marina sports a bustling boardwalk and holds shiny recreational craft and sea-tested fishing vessels; stacked crab pots and buoys push up against mural-painted walls; and waterfront processing houses face off with fine seafood dining. Aquariums; an “odditorium,” undersea garden and wax museum; and boutiques and kitschy souvenir shops vie for tourist dollars. Barking sea lions crowd a waterfront dock, and tuna can be bought straight from the returning fishing vessels.

Two lighthouses (Yaquina Bay and Yaquina Head to the north), jetties and a Coast Guard Station record human efforts to tame the ocean. The list of names at Yaquina Bay State Park’s Fishermen’s Memorial Sanctuary speaks to a sea that is tameless.

A popular fishing pier, local brewery and a coastline of beach attractions, as well as the rest of town, keep visitors on the go. Camping is convenient with marina-based sites on the bay’s south shore and others at South Beach and Beverly Beach state parks and at private facilities.

A successful fisherman cleans his haul of Dungeness crab in Newport.

On the central coast, Florence is the port city on the Siuslaw River. Its economy has been tied to lumber, lumber barging, commercial fishing and agriculture, and in recent years a gateway to Oregon Dunes National Recreation Area and a popular location for retirement.
By 1900, the town boasted a lumber mill, two canneries, a saloon, two groceries and a weekly newspaper. Early ocean shipping required tugs to pilot schooners over the changing bar into the river. Ferry boats provided river crossings. Some old buildings and clues to the one-time ferry remain. Bay Street’s Victorian-style storefronts hold shops selling varieties and sweets.

Modern river crossings take place on a famous Conde B. McCullough bridge, the jewelry of U.S. Highway 101. The arching drawspan with four Art Deco bridge-operator houses exemplifies McCullough’s mastery at blending aesthetics and function. Other McCullough spans include the McCullough Memorial Bridge in Coos Bay, Yaquina Bay Bridge in Newport and Umpqua River Bridge in Reedsport (to the north).

Motorhome visitors can stay at the Port of Siuslaw Campground & Marina (http://portofsiuslaw.com/campground) and easily stroll to shops and waterfront attractions. Other campgrounds lie along the Oregon Dunes coast. 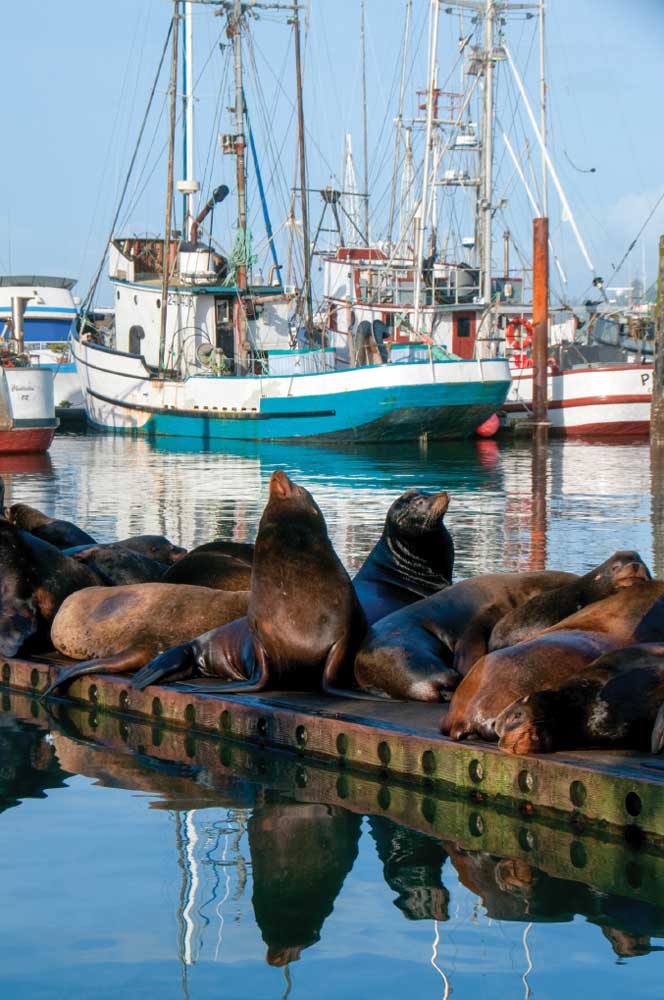 Reedsport and Winchester Bay/Salmon Harbor (also north) extend discovery. Salmon Harbor is a modern port, active with fishing charters and recreational boats. It has plenty of slips for land cruisers as well. Camp within sight of the water and the squawk of gulls. Reedsport is ATV- and chainsaw-art central. Sawdust flies at the divisional chainsaw sculpture championships each Father’s Day weekend (June 13-16, 2019). Florence celebrates rhododendrons in May and chowder in October.

First called Marshfield, the southern coastal estuary town and deep-water port Coos Bay now bears the name of the water on which it sits. Its contemporary industrial waterfront of railroad tracks, heaped wood chips and stacked logs, cranes and cargo containers, and arriving and departing ships echoes back to its days as a frontier transportation hub built on shipping, ship building, wood products, coal and agriculture.

At the time of settlement, water­fronts were claimed for function and were loud, grimy, smelly and sometimes dangerous places. Today, towns recognize their recreational value. A prominent visitor center, a fine waterfront boardwalk, and the Coos History Museum on Front Street lend a fresh face to the Coos Bay waterfront. Historic buildings are receiving second life as museums, shops, eateries and even a brewery.

Horse riders on the beach at Bob Straub State Park have a clear view of Haystack Rock, which rises 235 feet from the edge of the shoreline.

Coos Bay’s sister city to the north (North Bend) and Shore Acres State Park have historical ties to area lumber magnates Captain Asa Simpson, founder of North Bend, and his son, Louis Simpson. Their ownership stretched all along the Cape Arago coast. Shore Acres, a formal garden on a coastal bluff, was once the enviable estate of Louis Simpson. The mansion is gone but the grand views remain.

At the old Sun Plywood Mill on the banks of Coos Bay in North Bend, The Mill Casino Hotel & RV Park (owned by the Coquille Indian Tribe; www.themillcasino.com) gives nod to old, while ushering in new. Besides a full venue of entertainment, the casino has a full-service campground. 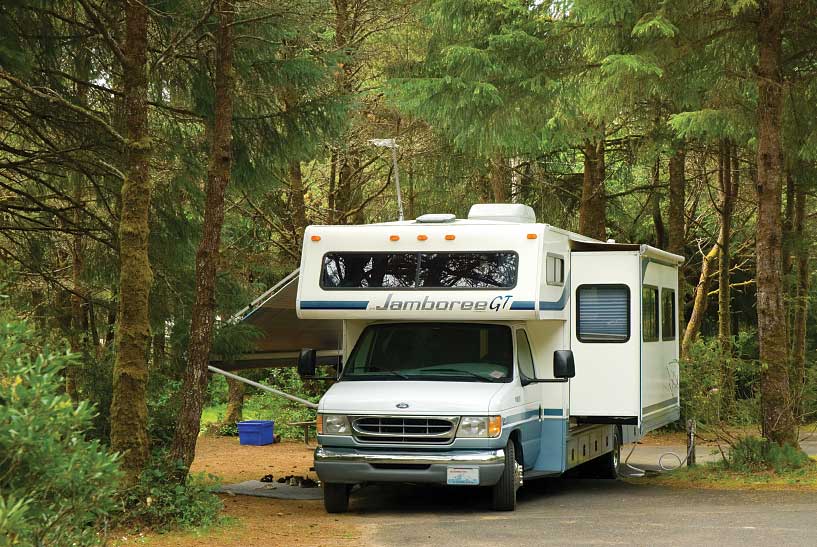