On the Trail of Billy the Kid 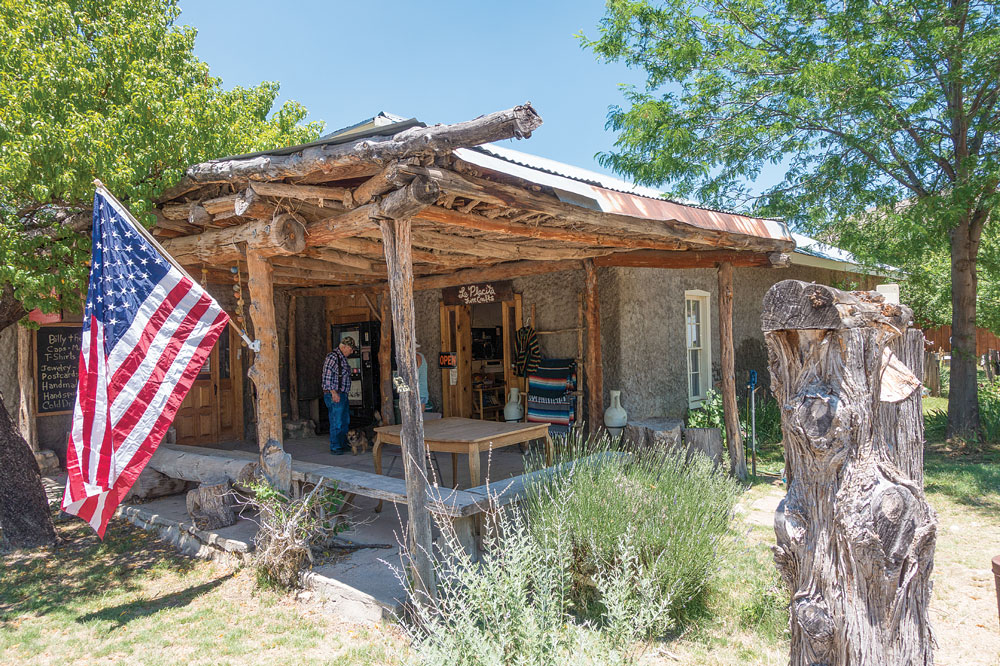 I’m one of those people who needs only the flimsiest of excuses to go exploring. Not long ago I was listening to one of my favorite movie-soundtrack albums, and it inspired me to take a trip. The soundtrack was from Pat Garrett and Billy the Kid, the 1973 Western drama directed by Sam Peckinpah and starring James Coburn as Garrett and Kris Kristofferson as Billy. The best part was seeing Bob Dylan in a fairly meaty dramatic role and listening to his inspired music written for the movie. Time to hit the road.

It’s interesting to consider what makes a celebrity in America. Some-times it’s a war hero or someone behind a medical breakthrough for the betterment of humanity. Sometimes it’s a “personality” whose virtues are difficult to discern. In mid-19th-century New Mexico, we had two archrivals — the good guy, Sheriff Pat Garrett, and the bad guy, killer William H. Bonney, alias Billy the Kid. Guess which one has had several movies, TV shows, scholarly treatises, museums, hit songs and a National Scenic Byway named for him?

The man we know as Billy the Kid was born Henry McCarty in 1859 in the Hell’s Kitchen area of Manhattan when it was better known as a neighborhood than a TV cooking show. At that time it was an Irish slum inhabited by tough people described in 1835 by Davy Crockett as follows: “In my part of the country, when you meet an Irishman, you find a first-rate gentleman; but these are worse than savages; they are too mean to swab hell’s kitchen.”

Repurposed for retail, a historic Lincoln building probably dates back to the 1850s. Originally settled by the Spanish, the town is better known as the locus of the 1878 Lincoln County War and for the resident ranchers, rustlers and lawmen who played a role in the deadly feud.

Billy’s Irish mother moved the family west, and he ended up spending most of his time in Arizona and New Mexico. For reasons not entirely clear, he began calling himself William H. Bonney and earned the nickname Billy the Kid because of his small stature (5 foot 7, 135 pounds in his prime) and youth (arrested for theft at age 15, a murderer at 18).

Fleeing the law, Billy settled in Lincoln, New Mexico, where he rustled cattle and signed on with a gang on one side of a turf war between two competing factions looking to control commerce in Lincoln County, particularly selling beef to nearby Fort Stanton. Known as the Lincoln County War, it vaulted Billy into the big leagues when he and two companions killed Sheriff William J. Brady and one of his deputies in revenge for their having killed his boss. Captured by Garrett, Billy was convicted of murder, incarcerated and sentenced to die by hanging in May 1881. He enhanced his legend when he escaped from jail, killing two deputies in the process.

In tracking Billy down, I knew that Lincoln was my first stop. But first I had to deal with a few unplanned diversions. Lincoln is located on U.S. Route 380 southeast of Albuquerque.

On the way I pass the village of Carrizozo, just another dot on the map. But, no, it’s a town with a story to tell. For the 2010 film The Book of Eli about a showdown for possession of the only remaining copy of the King James Version of the Bible, starring Gary Oldman and Denzel Washington, Carrizozo’s 12th Street was converted into the set for the climactic scene, a project that took nearly three months of building false fronts and constructing new buildings. A local shop owner landed a role as the town drunk.

Just down the road from Carrizozo is the village of Capitan, another dot on the map, but an interesting dot. Smokey Bear was born and buried here. In 1950 a devastating fire in the nearby Capitan Mountains left an orphaned bear cub badly burned. Nursed back to health and named Smokey Bear, he became the national symbol for fire prevention (“Only you can prevent forest fires”) and lived most of his life in the National Zoo in Washington, D.C. When he died in 1976 at the age of 26, he was returned to Capitan to be buried at what is now Smokey Bear Historical Park. Fascinating exhibits chronicle his life and career.

Lincoln is special not only because Billy the Kid slept here but because it exists in a state of suspended animation. Most of the structures are old with some history behind them, and there are no strip malls or other signs of “modern” civilization. It’s like a walk back in time.

I visit the Lincoln State Monument and its Tunstall Store, which was in some ways the epicenter of the Lincoln County War. The killing of the owner, John Tunstall, Billy’s employer, precipitated the war and vaulted Billy into the forefront of Wild West lawlessness. A wounded Billy was reportedly hidden under the store’s floorboards, as a posse searched the building following a trail of blood. Wooden crosses behind the store mark the graves of two of the combatants.

An interesting side note is that the governor of New Mexico at the time was a Civil War hero by the name of Lew Wallace who placed a $500 bounty on Billy’s head. He later achieved fame as the author of the novel Ben Hur. 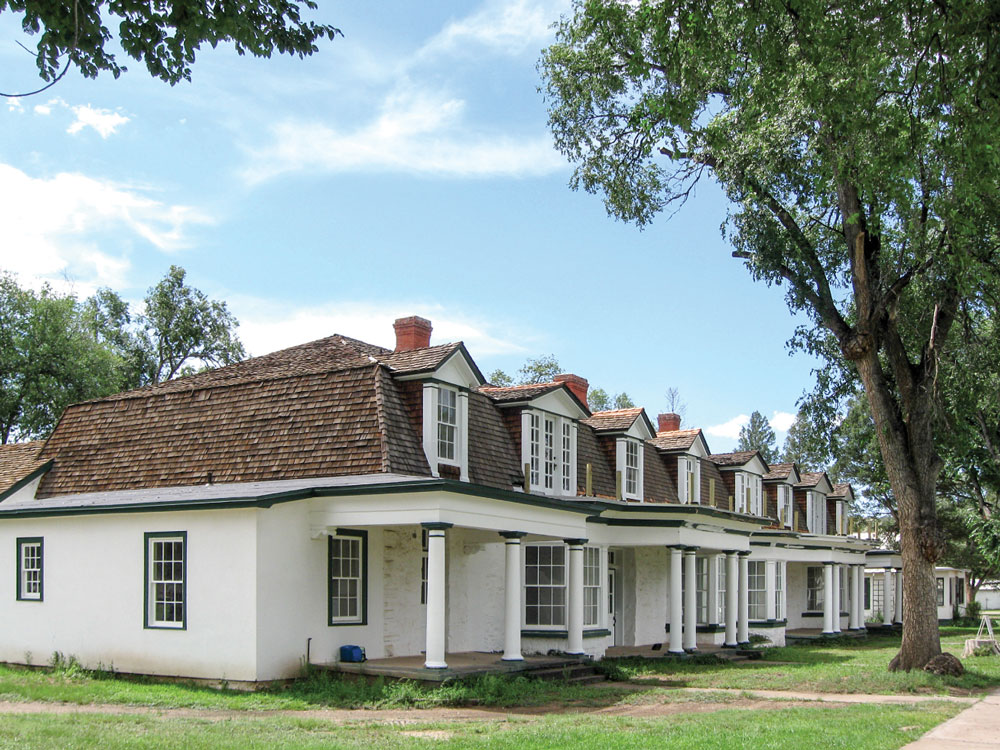 The original Fort Stanton Officer’s Quarters was built in 1855 and later modified and expanded. The fort has a long and checkered history. In 1862, the legendary Colonel Christopher Houston “Kit” Carson took control as one of its better-known leaders.

After Billy fled Lincoln, he settled in and around Old Fort Sumner, built by the U.S. government to guard more than 8,000 displaced Navajo and Mescalero Apache Indians in a misguided attempt to convert them to farmers. Billy had friends there and felt safe, but Garrett was a determined soul and also familiar with the area. At around midnight on July 14, 1881, as he was questioning one of Billy’s pals about his whereabouts, Billy unexpectedly walked into the room and was shot dead.

There’s little left of Old Fort Sumner, but that’s no reason not to come. The cemetery is the site of Billy’s grave, as well as that of two of his friends. The carved tombstone that replaced Billy’s original wooden grave marker in 1940 has the distinction of having been stolen at least twice (once for more than 20 years) and eventually recovered. The Old Fort Sumner Museum is located adjacent to the cemetery and displays lots of documentation about Billy’s life.

In the “new” town of Fort Sumner, there is an outstanding Billy the Kid Museum, privately owned, that should not be missed. Among other things, it houses a firearms collection that has to be priceless and includes the rifle that Billy is holding in the famous tintype portrait with the gun at his side. Other Fort Sumner attractions include the lot where the home once stood where Billy was killed, the community center where he danced, the saloon where he played cards and Garrett once tended bar, and other points of interest.

Another interesting aside: A tintype bought for $2 at a memorabilia shop in Fresno, California, in 2010 appears to show Billy and some of his gang playing croquet, which would be only his second known photograph. Experts have come down strong on both sides of the authen­ticity issue, but the tintype has been insured for $5 million, which makes a statement about what some experts think.

Not far from Lincoln sits the village of Ruidoso, now a ski resort and perhaps best known for Ruidoso Downs, a racetrack dedicated to quarter horse (not Thoroughbred) racing. The surrounding area is populated with several obscure sites related in some way to Billy, including places where his pals were shot and killed, where he hid out, where he engaged in gunfights and where he rode to escape pursuing lawmen or enemies. Of particular note is Little Creek Canyon Ranch, onetime home of Garrett, whose blind daughter, Elizabeth, became an accomplished singer-songwriter and penned “O Fair New Mexico,” the official state song.

Fort Stanton State Monument near Lincoln is considered one of the most intact 19th-century forts in the country and in its day was a significant purchaser of beef, a key point of contention in the Lincoln County War. It was originally built in 1855 to house federal troops charged with maintaining peace with the Mescalero Apache, a sometime confrontation that lasted nearly 30 years. During the Civil War, it was briefly occupied by Confederate forces. In 1896 the fort was abandoned by the Army and closed. In 1899 it was acquired by the U.S. Public Health Service and used as a tuberculosis hospital for Merchant Marine sailors.

One of Fort Stanton’s most interesting incarnations was as a World War II-era internment camp for a crew of 410 German seamen. In 1939, on orders from the German high command, their ship, the luxury liner SS Columbus, was scuttled off the Virginia coast to prevent the British from capturing it. U.S. ships rescued the crew, but the government didn’t want the skilled men returned to their mother country in a time of war, so they were sent to Fort Stanton for the war’s duration. Being accustomed to luxury, the seamen proceeded to make the best of it. They built a large vegetable garden, a recreation hall where they could listen to the ship’s orchestra, and a pool where they staged swimming competitions with locals. 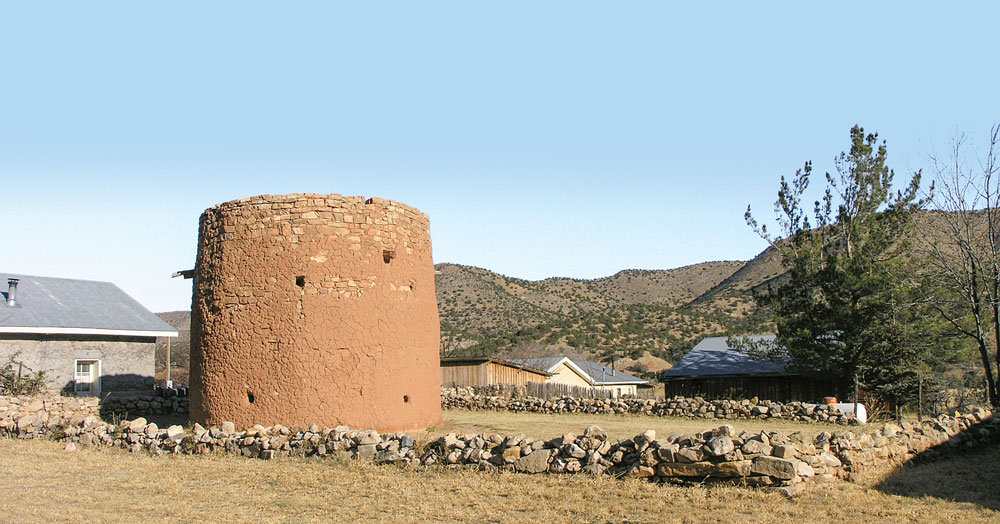 A stone torreón protected townsfolk from the Mescalero Apaches in Lincoln, the village made famous by Billy’s 1881 jailbreak.

Even in death, the Billy the Kid legend continues to inspire. Conspiracy theorists contend that Garrett never killed Billy but staged the shooting so he could escape; they were once friends. That in turn has inspired several people over the years to claim that they were, in fact, Billy. Writers have immortalized him in poems, comic books, biographies and fictionalized accounts of his life.

Starting in 1911 filmmakers have brought him to the big screen, and he has been played by the likes of Roy Rogers, Audie Murphy, Paul Newman, Emilio Estevez, Michael J. Fox and Kris Kristofferson. Songwriters and musicians got in the act, from Bob Dylan and folk music legend Woody Guthrie to Marty Robbins, Tom Petty and Jon Bon Jovi. Composer Aaron Copland’s Billy the Kid ballet exposed him to a higher-class audience in 1938. And, of course, he was well represented on TV.

I’m grateful to Billy for giving me an excuse to explore New Mexico with an agenda of sorts and thankful for the history lessons I never learned in school.

Billy the Kid Museum
Two miles east of downtown Fort Sumner, the eclectic and privately owned Billy the Kid Museum is chock-full of items related to Billy and artifacts from the area.
575-355-2380 | www.billythekidmuseumfortsumner.com

RV parks can be found all along the Billy the Kid Trail, including the following Good Sam Parks. For more places to stay, visit www.goodsamcamping.com