On the Shore in Wilmington 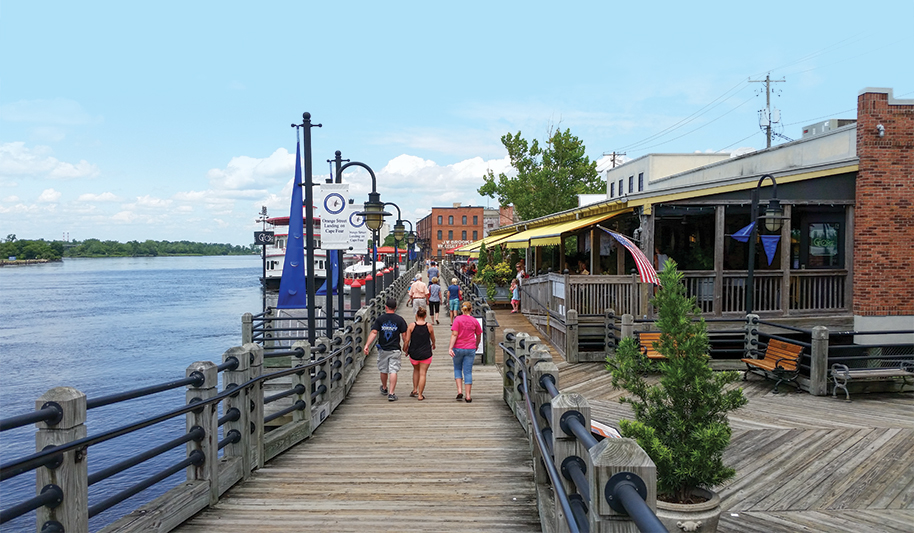 Many RVers like us are value-conscious travelers who maximize their on-road bliss by seeking out the best of both worlds — places with more than one claim to fame. The greater Wilmington area at the southern edge of the North Carolina coast certainly qualifies as that kind of destination. Wilmington encompasses two watery wonderlands that complement one another perfectly: a spirited historic downtown district on the Cape Fear River, plus an easy-breezy trio of island beach towns — Carolina, Kure and Wrightsville — on the Atlantic Ocean.

The best way to experience the magic of downtown Wilmington? Take a stroll on the 2-mile Riverwalk alongside the Cape Fear River.

For a fascinating step back in military time, start your Wilmington tour at the U.S.S. North Carolina Battleship Memorial. The celebrated battleship participated in every significant World War II naval offensive in the Pacific, earning 15 battle stars.

The North Carolina was built at the New York Naval Shipyard, launched in June 1940 and commissioned for military use in April 1941. Weighing 44,800 tons fully loaded and exceeding 728 feet in length, the ship cruised more than 300,000 miles in its course of duty at a maximum speed of 28 knots. During wartime, it carried 2,195 enlisted men, including 83 Marines, and was commanded by 144 commissioned officers. The North Carolina  was decommissioned in 1947 and relocated to Wilmington in 1961.

Viewed from the river, the vessel is an imposing sight, seeming to guard its present port. When observed from the memorial grounds, its enormous height, length and structural complexities are readily apparent, with towers, radar equipment, gun mounts and turrets all visible.

On a self-guided tour of the North Carolina ’s nine decks, we saw where crew members served their country while living and working at sea. We learned their stories through spoken accounts, vintage photos and personal keepsakes. We could even simulate starting the engines, steering the vessel and firing her guns to mimic the crews’ wartime duties.

After stepping off the battleship, we walked a few steps to the grassy edge of the grounds to board a reasonably priced water taxi that whisked us across the Cape Fear River. Water taxis are the most carefree and convenient way to travel into downtown Wilmington, where available parking spaces may be limited.

As you set out to tour Wilmington, if you visit the battleship memorial first, you can take advantage of free parking in the spacious, secure lot on the grounds. The water-taxi trip lasts about 15 minutes — just long enough to appreciate the panoramic Cape Fear River views — and drops riders off on the Riverwalk in the heart of the city.

When getting around the port community, you can opt for a self-guided walking tour or roll along on a rental Segway’s wheels. The trolley is an efficient way to take a whirlwind street tour of the downtown area. Most narrated trolley rides run less than one hour, and they cover all of Wilmington’s hotspots.

Without a doubt, the Riverwalk is the best starting point for venturing into the city. The wooden walkway is edged with inviting cafés and chic shops on one side and the rippling Cape Fear River on the other. The 2-mile Riverwalk meanders from Chandler’s Wharf to the Cotton Exchange and provides immediate pedestrian access to all of the downtown sights, sounds, retail shops, galleries and dining establishments.

A couple enjoys a leisurely bicycle ride on the Carolina Beach boardwalk.

To gain an offshore perspective of Wilmington, board a sightseeing cruise that embarks from the Riverwalk. The riverboats present all types of options from routine sightseeing to sunset sailings, musical performances and murder-mystery dinners. If a ride reminiscent of Wilmington’s past is more your speed, hop aboard an elaborate horse-drawn carriage for a few whinnies and a click-clack excursion through the city.

History buffs find plenty of compelling reasons to tour Wilmington’s historic district, which encompasses 230 blocks and includes 82 properties on the National Register of Historic Places. The charming hustle and bustle of the district is enhanced by the amazing variety of architectural designs in the preserved buildings. Greek, gothic, Spanish baroque and neoclassical revival, Italianate, Georgian, Moorish and Victorian styles are all represented.

Getting to Greater Wilmington
Midway between New York and Florida, Wilmington, North Carolina, is located at the southern terminus of U.S. Route 117 and is easily accessible from Interstate 40.
Wilmington and Beaches Convention and Visitors Bureau
877-406-2356 | www.wilmingtonandbeaches.com

Established in 1739, Wilmington was once a thriving center for shipbuilding and commerce. Its classic churches, colonial gardens, antebellum mansions and brick-paved streets offer present-day proof of the city’s historic authenticity. Restored buildings such as the Old City Market and the Cotton Exchange (a former grain mill and cotton warehouse) now contain clusters of appealing shops and restaurants that cater to tourists.

Wilmington’s museums and attractions feature everything from local artistry and scientific innovations to a railroad caboose and toothy crocodiles. On Saturdays, you can walk through the Riverfront Farmers Market to pick up blocks of cheese, baskets of berries, jars of honey or eggs fresh from the henhouse.

If you are into camellias, azaleas and all things green, a leisurely wander through Airlie Gardens is delightful. Under a canopy of moss-draped Southern live oaks, Airlie’s glorious gardens encompass vibrant blossoms, gliding swans, sculptures and a house dedicated to butterflies, all occupying 67 lush acres.

After getting sufficiently acquainted with Wilmington’s rich history, we traveled east of downtown to Wrightsville Beach. It’s a popular year-round destination for stand-up paddleboarders, kayakers, saltwater fishermen and surfers of all ages and skill levels. The island’s scenic fitness loop (just under 3 miles) is a prime place for walking, jogging and cycling. Johnnie Mercer’s Pier stretches more than 1,200 feet into the sea and is the only concrete structure of its kind in the state. 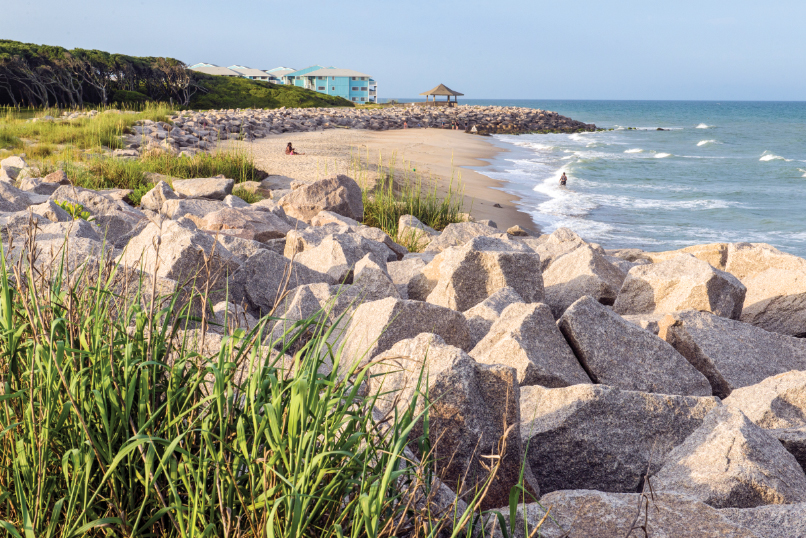 Small-town Kure Beach is an outdoor-lover’s paradise with sailing, surfing and swimming opportunities.

Minutes south of Wrightsville, Carolina Beach is best known for its lively oceanside boardwalk and vintage beach vibe: picture flip-flops and classic family fun. Exploring the boardwalk is a time-honored custom. The waterfront walkway is a hybrid structure with a paved concrete commercial area set back from the ocean and an elevated wood-plank boardwalk that runs parallel to it and overlooks the shimmering blue ocean.

We started our boardwalk quest by dunking an iconic Britt’s doughnut in our morning coffee. Britt’s Donuts (open seasonally) has been delighting Carolina Beach-goers since 1939. The shop’s famous doughnuts — simple glazed circles of chewy dough that are free of extra goo or gimmicks — have inspired T-shirts, bumper stickers, a hardback book and a fan club. Beyond the loyal following in North Carolina, Britt’s Donuts has earned wider acclaim, winning second place in a national doughnut-shop competition. After tasting one of their warm melt-in-your-mouth doughnuts with a secret signature glaze, you will likely become a Britt’s fan, too.

Simple pleasures never seem to end on the Carolina Beach Boardwalk. In addition to doughnuts, you can sink your teeth into buttered corn on the cob, steamed crab legs, New Orleans-esque snowballs, handmade fudge and other goodies at the Fudgeboat. You can ride a dapper horse on the merry-go-round, sit through a rousing round of bingo or just watch stars twinkle. Later, catch a beachfront music festival, roast marshmallows around a blazing fire and see fireworks shoot through the sky.

For a glimpse of the area’s all-natural side, be sure to visit Carolina Beach State Park, where fishing at the marina and boating are popular activities. On the park’s nature trails, rare Venus flytrap plants, wild orchids, woodpeckers and yellow-throated warblers can be spotted. Look up for soaring ospreys, egrets and herons, and keep your eyes on the hiking trails to view marsh rabbits and white-tailed deer. 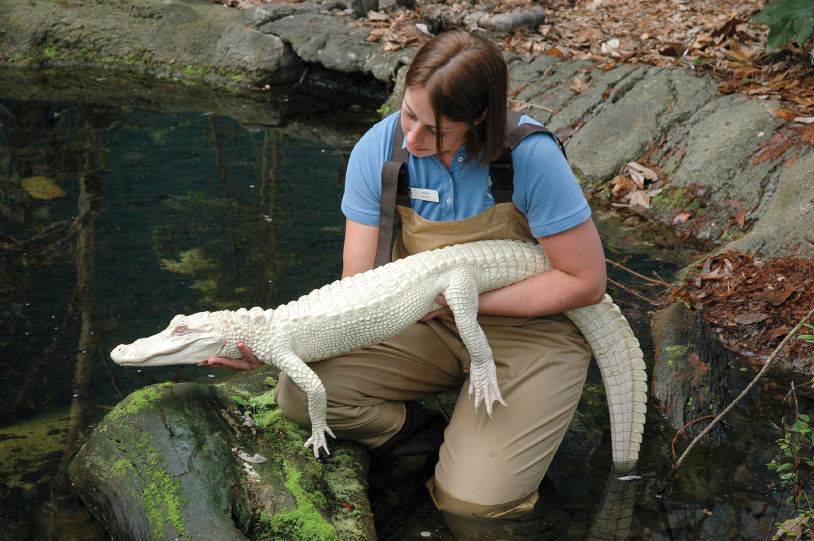 Kure Beach is the southernmost and smallest of the three beach towns on the outskirts of Wilmington. Angling enthusiasts like to visit quiet Kure Beach to cast their lines from the island’s 711-foot-long fishing pier, one of the oldest such structures on the Atlantic coast. A steady stream of pedestrians and fishermen — both residents and tourists — keeps the scene hopping on the tall wooden pier.

From Kure Beach, a side trip to Fort Fisher State Recreation Area offers yet another fresh perspective on greater Wilmington. The park protects 300 acres of unspoiled beaches where shorebirds and loggerhead turtles build their nests.

Exhibits at Fort Fisher’s North Carolina Aquarium showcase all sorts of fascinating aquatic habitats from freshwater streams to brackish swamps and salty seas. Water-dwelling creatures such as alligators, sea turtles and sharks are also on display.

Fort Fisher State Historic Site preserves the archaeological remnants of a strategic bastion remembered as the Last Major Stronghold of the Confederacy and is a quirky site worth visiting if you want to expand your knowledge of Civil War history.

The next time you’re searching for a best-of-both-worlds travel experience, add the watery wonders and historic gems in and around Wilmington, North Carolina, to your list. 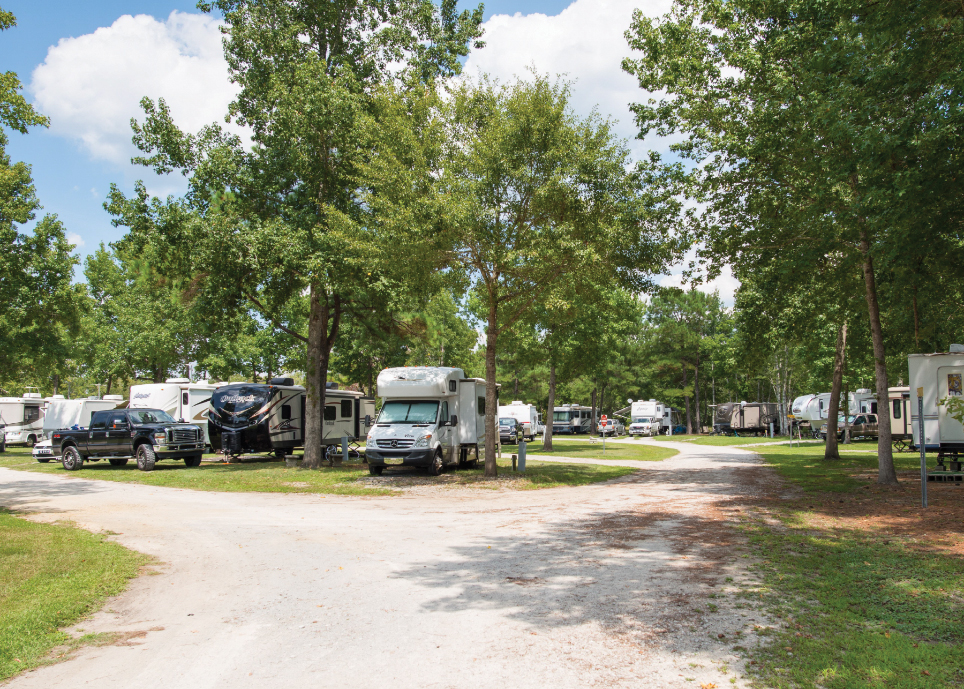 Brunswick Beaches Camping Resort, 46 miles south of Wilmington in Sunset Beach, offers more than 80 campsites for all kinds of RV combinations. Pets are welcome at the top-rated resort.
855-579-2267 | www.brunswickbeachescamping.com

Carolina Beach State Park, 10 miles south of Wilmington, has 83 tree-shaded campsites, each with a picnic table and a fire ring with a grill, but no hookups. The bathhouse has hot showers and flush toilets.
910-458-8206 | www.ncparks.gov/carolina-beach-state-park

Wilmington KOA, 8 miles northeast of Wilmington, provides top-notch facilities and an assortment of level, shady, full-hookup campsites for RVs of all shapes and sizes. Pets are welcome.
888-562-5699/reservations | 910-686-7705/information | www.koa.com/campgrounds/wilmington