On a Mission in San Antonio 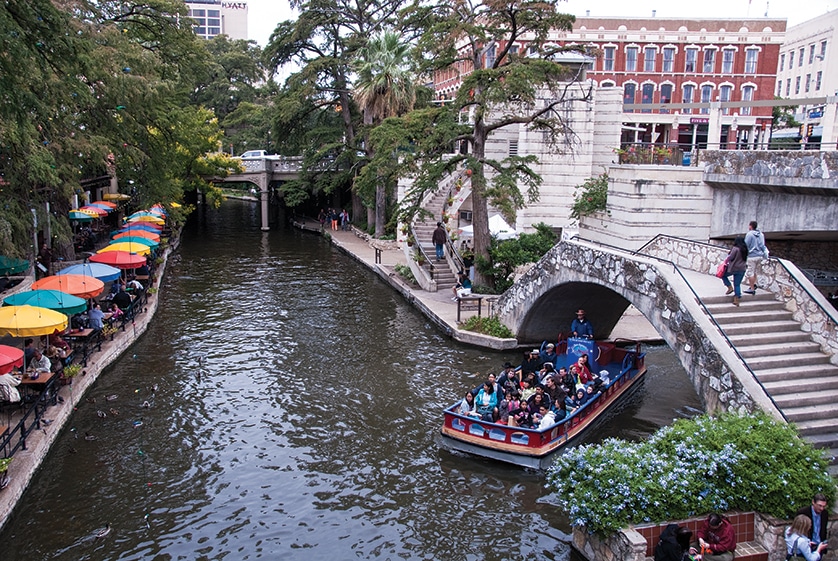 There’s more to this Texas city than the Alamo, with its historic buildings, a wildlife ranch, caverns, and the restaurant- and shop-lined River Walk that winds under bridges

San Antonio. Mention the city and you’ll probably think of the Alamo and four other 18th-century missions found in the first civilian settlement in Texas. Originally called San Antonio de Béxar and founded in 1718, when I think of San Antonio I think of even more. I think of the River Walk, the Witte Museum, the San Antonio Botanical Garden, the San Antonio Zoo and much more. I think of a fun city to explore!
Recently my husband, Mike, and I spent eight days in San Antonio. Mike is retired from the Army so we stayed at the Joint Base San Antonio RV Park at Fort Sam Houston. When we were in the city we found lots of construction going on and were only too happy to drop our travel trailer and explore the city in our pickup. The RV park, located northeast of downtown, was a great place to camp. For those without a military identification, I would suggest staying at the San Antonio KOA, located 5 miles east of downtown, or Travelers World RV Resort, located 3 miles south of downtown. Both campgrounds have trees and access to hiking and biking paths as well as city buses to take you downtown and other places.

Walking and river boat tours are the most popular way to explore the River Walk, named Paseo del Río in Spanish, with its fine restaurants, numerous hotels and small waterfalls. The River Walk is operated by the Paseo del Río Association.

Visit San Antonio and you’ll have to see the Alamo. The Alamo (originally called Mission San Antonio de Valero) was established in 1718 as the city’s first mission. It served as a way station between east Texas and Mexico and was the site of the famous Battle of the Alamo. On March 6, 1836, Mexican General Santa Anna’s army killed the Alamo’s 189 defenders, including David (aka Davy) Crockett. View artifacts and walk the hallowed grounds before moseying along the River Walk.
Now 8 miles long, the downtown portion of the River Walk is the most popular with numerous hotels, fine restaurants and even small waterfalls. The River Walk, named Paseo del Río in Spanish, is operated by the Paseo del Río Association. Patrolled 24 hours a day by officers on boats, bicycles and on foot, the San Antonio River is born a few miles north of downtown and eventually flows 240 miles through five Texas counties. It joins the Guadalupe River and flows all the way to the Gulf of Mexico at San Antonio Bay. We walked along the river, where we could access both sides via quaint bridges, but another way to see the river is via taxis and narrated tours that highlight the main river bend area.
As we walked through downtown, we saw plenty of historic buildings. One of the best ways to learn more about the downtown region, including La Villita, a historic arts village, is to walk the Texas Star Trail, a 2.6-mile walking trail. En route are many sites, including San Fernando Cathedral. Founded in 1731, it is the oldest cathedral sanctuary in the United States.
Besides walking around town, there’s trolley and bus transportation. If you’re 62 or older be sure to go to the VIA Metropolitan Transit Information Office to get your Reduced Fare ID. Once you have the photo ID, prime-time trolley rides are only 25 cents each with free trolley rides on weekends and half-fare bus rides any time.

Mission San José is an interesting place to explore. Built in 1720, the mission is the largest in Texas and is located in San Antonio Missions National Historical Park.

The four missions to the south are part of the San Antonio Missions National Historical Park. A bike trail is under construction that leads 10 miles south past Mission Concepción, Mission San José, Mission San Juan Capistrano and Mission Espada. In the years to come, the family friendly off-road multiuse path will be suitable for all experience levels. If you’d rather drive, signs point the way.
The park and missions are open 9 a.m. to 5 p.m. daily except Thanksgiving Day, Christmas Day and New Year’s Day. The southernmost mission, Mission Espada, was founded in 1690 as San Francisco de los Tejas, and is the oldest of the East Texas missions. It was moved to the San Antonio River in 1731 and renamed San Francisco de la Espada.  As mentioned, Mission San Antonio de Valero (the Alamo) was the first mission on the San Antonio River, founded in 1718. Two other missions — Mission San Juan and Mission Concepción — were also moved from East Texas. Mission San José was built in 1720 and is the largest of the Texas missions.
Mike was at an EOD Convention the day I visited the San Antonio Zoo, located in Brackenridge Park. The zoo is ranked as one of the best in the nation and is in a lovely 56-acre setting with plenty of trees for shade on hot Texas days. The zoo, open every day of the year, is home to 750 species. Though I spent plenty of time exploring the zoo, I could spend hours just watching the hippos. The day I visited, the handsome pair stood bobbing in the water, their massive heads separated from my much smaller head by a thick pane of glass. It was a sight to behold as I made a self portrait, just the hippos and me.

The Saint Joseph Catholic Church is located on East Commerce Street in downtown San Antonio. The Rivercenter Mall was built around the parish because the church refused to sell to the land developer.

The zoo is a great place for folks to learn about wild animals and have fun at the same time. Be sure to hook up with the keepers for special talks and feedings. Two zoo helpers showed a group of children Miss Rita, a 20-year-old three-banded armadillo from Brazil. In addition, the zoo is a good place to look for native animals. A 10-year-old yellow-crowned night heron was hanging around the zoo; she’d been partially hand-raised by keepers. Visit in the spring and you’ll see a huge rookery of herons, a messy, but interesting delight.
Adjacent to the zoo, on Broadway, is the Witte Museum, a good place to learn about the natural history of Texas, as well as South Texas heritage. Located on the banks of the San Antonio River, the permanent collection offers historic photographs and artifacts, as well as dinosaur bones, cave drawings and more. In the newest facility, we learned about the history of San Antonio and South Texas by viewing artifacts such as brands and spurs, firearms and historical clothing. We also learned about real-life stories of Tejano freighters, cowboys, vaqueros, Native Americans, Spanish settlers, farmers and ranchers, and women and children who grew up on the land.
After spending time indoors, we headed over to the San Antonio Botanical Gardens, which is about 1 mile to the east/southeast. We felt as though we were in another world, not vising a place in the seventh-largest city in the country! Located off Funston, the gardens are accessible to everyone; in fact, wheelchairs are available on a first-come first-served basis. Enjoy walking? If you do, you’ll enjoy the gardens where you can search for native birds as well as view formal and display gardens, a Japanese garden, desert plants and cactus, as well as three distinct regions of native Texas including the East Texas Piney Woods, Hill Country and South Texas habitats.

The Mitchell Lake Audubon Center, located about 10 miles south of San Antonio, offers up many interesting creatures, including this roseate skimmer. Wildebeest mom and calf at the Natural Bridge Wildlife Ranch, located northeast of downtown San Antonio and next door to Natural Bridge Cavern. At Natural Bridge Wildlife Ranch, we drove through several times to feed animals like this Damaraland zebra, which seemed to laugh
at the thought of food being served from
our pickup.Mike and I enjoy searching for birds, so one morning we headed to the Mitchell Lake Audubon Center (MLAC), about 10 miles south of downtown off Interstate 410. We saw countless American white pelicans as we walked what used to be a series of old sewage ponds, and while we could still detect a slight stinky odor, the birds didn’t seem to mind. In addition to pelicans we saw a vermilion flycatcher, a gorgeous red bird, plus avocets, black-necked stilts and a crested caracara. On the Native Plant Trail we learned about South Texas trees and shrubs and looked for rattlesnakes, though we didn’t see any. The MLAC is open Saturday through Monday from 8 a.m. to 4 p.m.
Outside of town, but not too far away, are attractions worthy of visits. To the east is the Natural Bridge Wildlife Ranch, a safe haven for countless animals. Entering through the gates, we received a bag of food for the animals encountered along the 4-mile drive. We had fun feeding ostrich, antelope and even zebras. The zebras have learned to open their mouths so visitors can toss feed pellets in. Watch out for the ostriches. One surprised my husband by grabbing his glasses right off his face and tossing them on the ground. Fortunately his $400 prescription glasses survived!
Located right next door to the Wildlife Ranch is the Natural Bridge Caverns. Though not affiliated, I would recommend a visit to both places. On the way to the Discovery Aquifer Tour we passed below the Natural Bridge, an amazingly thin piece of rock. Next, we entered the doors protecting the caverns and were impressed by what we saw. The trail into and out of the cave is paved, but it’s steep and slippery so rubber-soled shoes are recommended. The cave is not a cold cave, it’s 70 degrees inside with high humidity so it’ll seem even warmer. I thought the inside temperature perfect — not too hot and not too cold!
If you want to get out in the woods for some mountain biking or hiking check out Government Canyon State Natural Area in the South Texas Plains Region. Located inside the San Antonio city limits, Government Canyon is one of the nation’s largest urban preserves with rolling prairie and rugged canyonlands. The oasis protects thousands of acres of karst for the Edwards Aquifer, the primary source of water for millions of people in central Texas. Like all Texas parks, there’s a day-use fee. The park is open Friday through Monday, with camping allowed only on Friday and Saturday nights.
San Antonio has even more to offer. If you like attractions like SeaWorld and Six Flags then check them out. In nearby New Braunfels is Schlitterbahn, a waterpark (open April through September) and resort on 65 acres. If you like quaint towns, antiquing and wine tasting, a trip to Fredericksburg, about 70 miles north of San Antonio, is well worth it.