Ohio’s Cuyahoga Valley National Park: It Started with a Spark 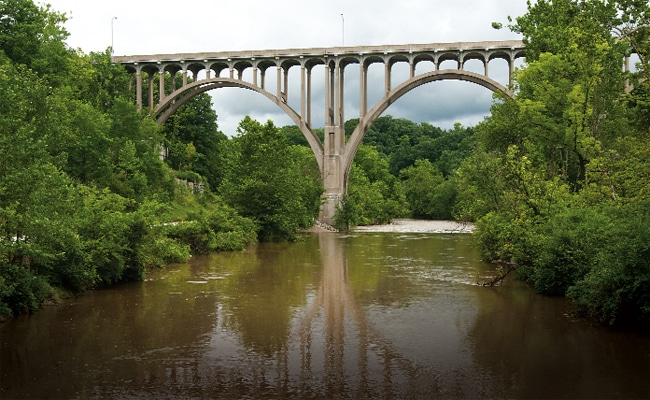 In June 22, 1969, Ohio’s Cuyahoga River caught fire, sparking the creation of a national environmental celebration most of us recognize as Earth Day. But fire on the river prompted such a thorough cleanup of the Cuyahoga that the area was eventually elevated to national park status, meaning the area had to offer “superlative opportunities for recreation” and be “relatively unspoiled.” Considering that raw garbage, piles of beer cans, and junk cars had once blighted the land and water, and oil slicks fouled the river, it seemed impossible that such standards could ever be achieved.

As a former National Park Service employee, I was curious about this “River of Fire,” and last summer fate decreed; we’d be in Ohio and see signs for Cuyahoga Valley National Park and for a KOA. Diverting from Interstate 80 we settled in for a night or two of camping, but were surprised to find that five days later, we were still enjoying a river so polluted it caught fire on multiple occasions.

We began our explorations the morning following our arrival at the KOA by making the 20-minute drive from the campground to the park’s Peninsula Depot Visitor Center. We learned the quickest way to survey Ohio’s only national park would be to drive the park’s Riverview Road. For several hours we poked along, and as we drove we saw a seemingly pristine path where cyclists rode and hikers strolled. On the opposite side of a lovely river, we sometimes saw a small passenger train chugging along. We also saw ponds and thick forests, and it was then that I remembered that back in 1969 some key players had been absolutely enraged about creating a park from a junk pile and a fouled river. But hard work and a great vision prevailed. In 2000, Congress provided the area with its highest of designations – and appropriately so. Today, quality recreation most certainly does exist at Cuyahoga Valley National Park.

For starters, the National Park Service has created a wonderful blend of cycling and railroad transportation, both paralleling an ancient trail where history still lives.

In 1827, the path was developed in conjunction with a canal that floated barges. Eventually the old canal system stretched 308 miles from Cleveland to the Ohio River at Portsmouth, Ohio. Mules towed the barges and, at the height of their service, helped transport more than 2 million tons of wheat. This system was an integral part of America’s transportation and worked until the trains took over in the late 1800s. But the canal still lives as a grand part of American history, featuring old locks and quaint homes, backdropped by a much heralded agrarian lifestyle.

The Cuyahoga Valley National Park is teeming with flora and fauna, like this lilly found right along a bike trail.

Today, the path spans 110 miles along the old Ohio and Erie Canal and is celebrated as a National Heritage Area, of which 20 miles are managed by Cuyahoga Valley National Park.

Early one morning we unloaded our bikes at a parking lot adjacent to the small village of Peninsula, and immediately picked up a spur trail that crossed a bridge offering wonderful views of a roaring stream. We pedaled onto the old towpath proper, and the abrupt transition continued. At times we could see the Cuyahoga, a Native American word that means “Crooked River,” winding through verdant mountains. We could hear birds chirping and then we could hear the croaking of a great blue heron from a marsh. Continuing our survey, we saw a number of deer and several wood ducks. In other words, even the minutia of Cuyahoga was beautiful, backdropped by a grandeur that cyclists and hikers love to see and explore.

A bridge near the Peninsula Depot Visitor Center leads to the Ohio and Erie Canal Towpath Trail.

Interpretive signs state that long ago the landscape was formed by the mingling of two diverse geographic regions, the Appalachian Plateau and the Central Lowlands. These vast regions were modified by the comings and goings of multiple glaciations.

We pedaled on, ascending several small hills that soon dropped onto the Szalay’s Sweet Corn Vegetable Farm featuring an old acre-sized barn housing huge bins of corn, cantaloupe, squash, beans, carrots and watermelons. The display was immense and all was produced by local area farmers. Appropriately, the nearby Hunt Farm Visitor Information Center celebrates and interprets the agrarian lifestyle.

Departing the Szalay’s farmer’s market, we soon entered a marshy area and a boardwalk. Suddenly, we heard the thud of a beaver slapping its tail, appropriate as the area was designated Beaver Marsh. A muscular bicycle-mounted ranger with dreadlocks poking beneath his helmet pedaled over, dismounted, and began a conversation that quickly led to information about our surroundings. “Once the pond had been a Volkswagen junkyard,” he said, adding that if you had driven by here 20 years ago, you would have seen huge cranes lifting rusting car bodies from the mud.

Deer are a common sight in Cuyahoga Valley National Park.

He explained that the plan had been to transform the junkyard into a parking lot, but several beavers built a dam and that created a new and better plan. Then he added with much pride and a winning smile, “We have several beaver lodges in and around the marsh, and that makes for about 30 beaver!”

From Beaver Marsh, the historic path continues for a total of about 12 miles from Peninsula. By now we knew our return could be made by train. From April through October, between Wednesday and Sunday, you can park your car at any of five different train stops. Or you can cycle to one of the many stations along the canal, paying just $2 to hop aboard with bicycles and return to your vehicle.

That evening we boarded a train from near the park’s southern terminus and relaxed as the train chugged along. The ride back was short and when we detrained, musicians greeted us with old-time tunes. Throughout the summer, Cuyahoga sponsors entertainment, and the couple greeting our train specialized in folk music.

Riding in the bicycle-friendly area was enticing so the next day we returned. This time we headed north where we quickly passed under the huge I-80 bridge. In 2008, a pair of nesting peregrine falcons had taken up home beneath the bridge so we stopped to scope out the massive concrete structures, hoping to see the rare birds. But the falcons had fled. Naturalists, however, say the birds are often seen during nesting season, meaning the area provided an adequate prey base.

We continued cycling, passing locks, old homes, a small Park Service bookstore and much more wildlife. By early afternoon we reached Rockside Station and the northern end of the park, alerting us that during our stay we had now cycled the entire length of the park. At that point we were about six miles from Cleveland, and industrialization began to reappear. We boarded a stopped train, and then began listening to other passengers. Without exception, everyone was ecstatic, with some passengers talking about the resiliency of nature and the canal system that helped create a nation.

We settled back, realizing what they said was true, but also that the type of life we so love was the direct result of our life on the road. Such a life has enabled us to learn – that even in Ohio, between Cleveland and Akron – all national parks offer “superlative opportunities for recreation.”

That’s true, even in a park that preserves a river that once caught fire.