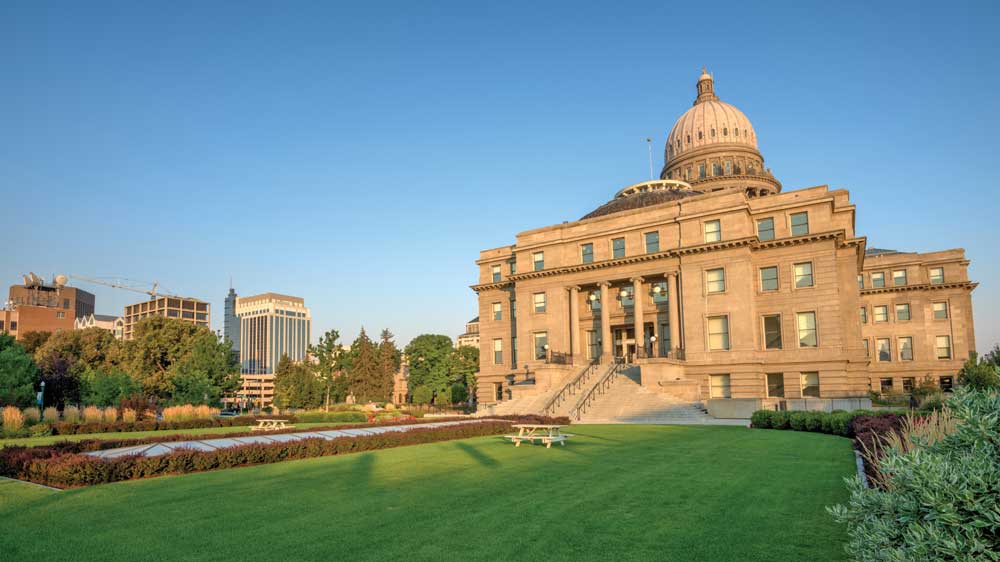 Idaho’s capital delights with outdoor recreation, delicious food and wine, and a tour through a “haunted” prison

Boise, Idaho, has been on our list of places to explore ever since we traveled through the beautiful city on the way to somewhere else in 2009. Last year, my husband, Jim, and I finally returned for one glorious week. We knew which RV park we wanted – Boise Riverside RV Park, which is next to the Boise River Greenbelt, a 25-mile paved bike path that runs along the river through the city. It’s also next to the fairgrounds, which unbeknownst to us, were hosting the 10-day Western Idaho Fair (August 16-26, 2018). We considered ourselves lucky to get one of the last RV sites.

When we saw the heavy traffic going to the fair, we also considered ourselves lucky that we could walk to it from the RV park. The fair had everything we expected: exhibits, carnival rides, food and entertainment. The expo building had displays of prize-winning photo­graphy, crafts, flowers, fruits and vegetables, including a 766-pound pumpkin. In the barns, we saw lots of livestock and watched two women spinning fleece into yarn. Draft horses pulled logs through an obstacle course in a nearby arena. BMX bicycle stunt riders wowed the crowd with a breath­taking, action-packed show. We ate delicious tacos al pastor made from marinated pork grilled on a spit. The entire experience reminded me that we should go to state fairs more often.

The Idaho Capitol was rededicated in January 2010 after three years of renovations.

Riding bikes on the Boise River Greenbelt is a great way to sightsee. We rode our bikes first on the south bank of the Boise River through the city. After we passed the campus of Boise State University, we rode back on the north side of the river. If you see this picturesque bike path, slap your forehead and say, “I shoulda brought my bicycle!” there’s a solution: Boise Riverside RV Park rents bicycles and helmets.

The city has some beautiful parks, and the Greenbelt “serves as the uniting ribbon that links these precious jewels – the properties given to the city in honor of some of Boise’s finest civic leaders.” These nine parks, all part of the “Ribbon of Jewels,” are legacies of remarkable women and their commitment to their community. It all started in 1907 when Tom Davis deeded 43 acres in memory of his wife, Julia Davis. That park, which has grown to 89 acres, includes a formal rose garden, a zoo, an art museum and several other recreational, cultural and scientific facilities. Henry Morrison followed suit in 1959 when he developed and then donated the 153-acre Ann Morrison Park to honor his wife. It has a large spray fountain near its center, and plenty of space for play. There are courts for tennis, volleyball, softball, soccer, lacrosse, cricket, horseshoes, bocce ball and disc golf.

At the J.A. and Kathryn Albertson Family Foundation Boise Whitewater Park, we watched surfers ride the waves. While temperatures in the high 90s had almost given me the courage to try stand-up paddle boarding for the first time, watching these guys convinced me to play in the water, too – flat water, of course. 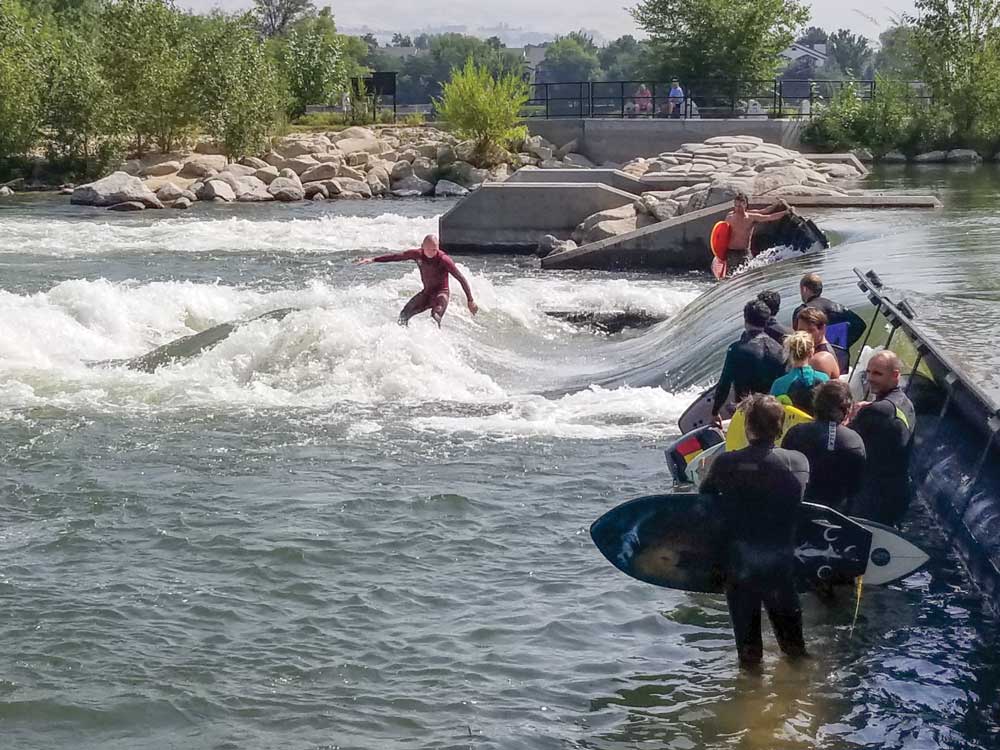 Surfers wait in line at the J.A. and Kathryn Albertson Family Foundation Boise Whitewater Park to ride the Green Wave.
Photo by Mary and Jim Zalmanek

The next day we drove to the Bernardine Quinn Riverside Park, where we rented stand-up paddle boards from Idaho River Sports. Since we were beginners, we received basic instructions. I fully expected to fall, since I’d heard it was tricky to get the balance right.
We took off and paddled around Quinn’s Pond. Much to my surprise, neither one of us fell in the water, due in part I imagined, to the ideal conditions. The weather was hot and calm, not a breeze in the air or a ripple on the water.

I searched online to find other fun, interesting activities in Boise, and ended up booking an escape room, touring a prison museum, tasting wine and seeing a play.

At Boise Escape, we were teamed up with five other “escapees,” the Owens family, to find The Lost City of Z. We had one hour to find the lost city and then find our way out of the room. Fortunately for us, the teens and 20-somethings in our group were able to solve the hardest puzzles. When we posed for our victory photos afterward, I saw a sign that said only 15.7 percent of groups that played The Lost City of Z have escaped.

The escape rate was much lower at the Idaho Territorial Penitentiary. From 1872 to 1973, it housed more than 13,000 inmates, 215 of them women. The Old Idaho Penitentiary is now a museum. Our guide, Mary Beth, led us though the 30-building complex while telling us about “Old Pen’s” fascinating past. In its 101-year history, there were more than 500 escape attempts and at least 90 were successful. In most cases, the escapees enjoyed freedom for just a few months, days or hours. One notable exception was Charles Smith, who ran away in 1904 while working in the garden outside the prison walls. After an extensive search, it was believed that he drowned in the Boise River. Imagine the prison officials’ surprise when he voluntarily gave himself up and returned to the prison 36 years later! 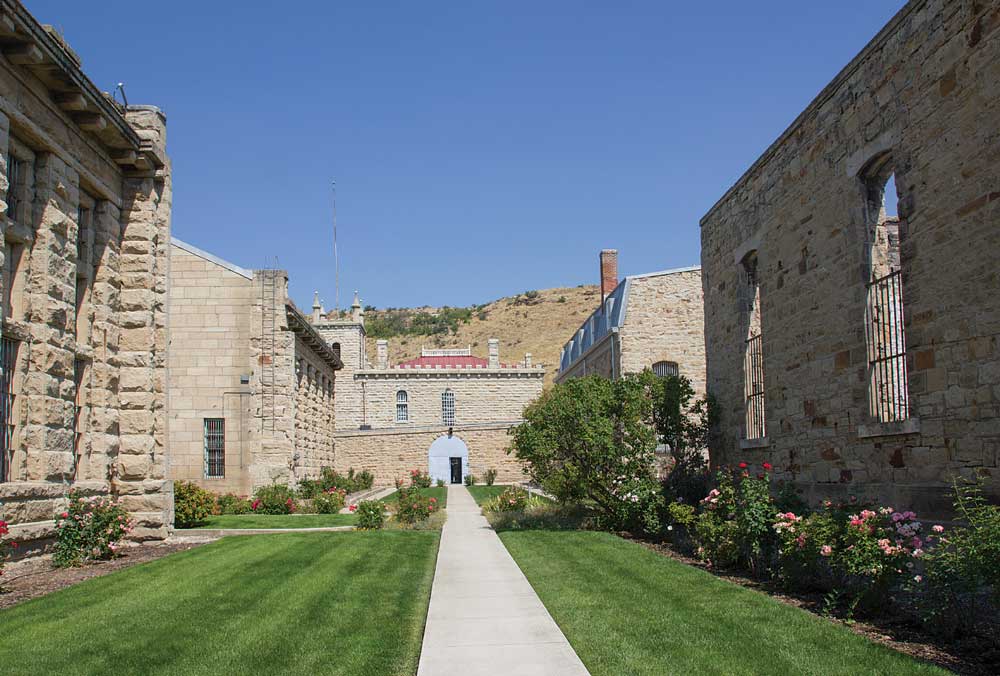 The Old Idaho Penitentiary, once home to some of the West’s most desperate criminals, is now a museum.

Perhaps Charles Smith missed the hard labor and prison-grown food. Inmates removed sandstone from a quarry and constructed most of the prison’s structures. For 10 years, they also made shirts. During the Great Depression, lawmakers closed the factory because they believed “convict labor and the goods it produced should not compete with ‘honest’ citizen laborers.” Prisoners raised horses and cows, and tended vegetable and rose gardens, including the test garden where the Jackson & Perkins rose company bred the first Tropicana roses in the U.S. Despite its auspicious name, the rose garden has a dark past; it was the site of six executions by hanging.

The rose garden and several other locations in Old Pen with a violent and tragic past are rumored to be haunted. Several times a year, Big River Paranormal, a company that gathers evidence and educates the public about the paranormal, shows up with specialized equipment and attempts to connect with inmates and guards of the past. 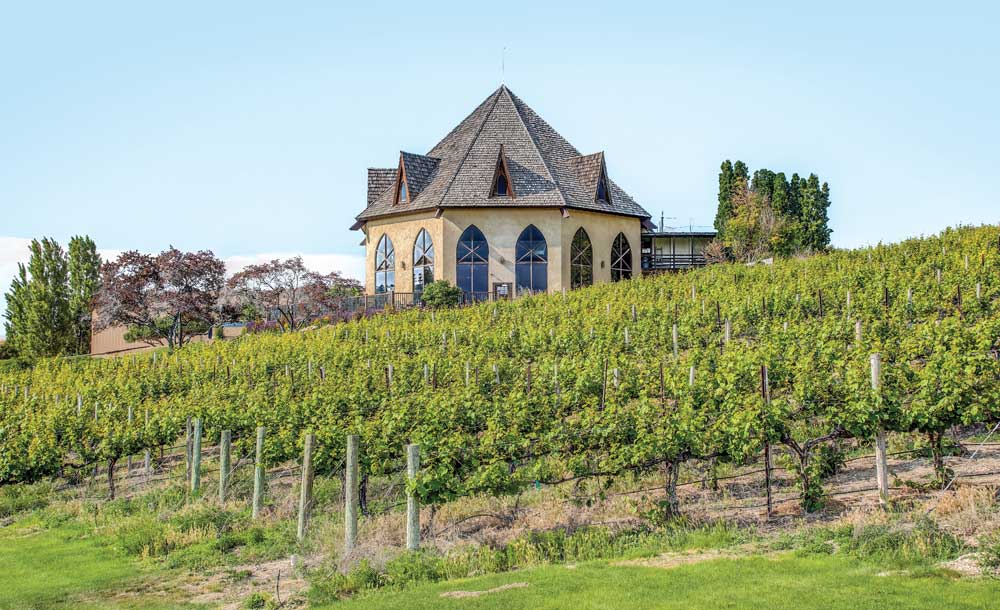 The Idaho Botanical Garden, established in 1984, sits next to Old Pen. The garden’s 33 acres was once known as #2 Yard of the Idaho Territorial Prison. The garden now features a diverse plant collection, water features and an outdoor art gallery on the 15 acres that are currently under cultivation. Part of its mission statement is to “provide a full garden experience for all ages,” and the specialty and demonstration gardens seem to do just that.
The Children’s Adventure Garden features a kitchen garden, treehouses and a carnivorous plant display. Adults can learn about water conservation, succulents, herbs and fire-wise plants, or simply relax in the Meditation Garden or English Garden.

Another activity adults might enjoy is following the Snake River Valley’s Sunny Slope Wine Trail. There are 15 wineries in Idaho’s first and largest American Viticultural Area (AVA). With its combination of microclimates, soil and other growing conditions, the Snake River Valley produces some excellent wines, including award-winning chardonnays, cabernet sauvignons, merlots, Johannisberg Rieslings and pinot noirs.

We picked out two wineries in the same general neighborhood and headed out to sip some wine. 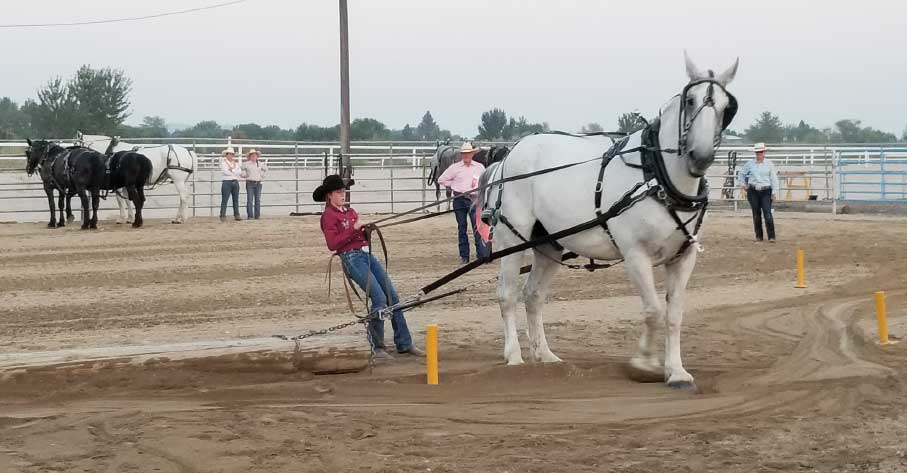 Draft horses pulled logs through an obstacle course at the Western Idaho Fair.

Ste. Chapelle Winery was founded in 1975 and moved to its current facility in 1978. Its recently remodeled tasting room is surrounded by vineyards and overlooks the Snake River Valley. Our tasting included five wines to share. We also ordered a meat-and-cheese platter, which paired well with the wines. I especially enjoyed the chardonnay and the soft huckleberry wine.

Koenig Vineyards was founded in 1995, and the elegant tasting room opened in 2016. In addition to wines, the tasting room features vodka, brandy and whiskey from the Koenig Distillery. I particularly liked the Riesling ice wine. The grapes are hand-picked and pressed while frozen in the cold days of late December. With 19 percent residual sugar, ice wine is a nice dessert wine.

While we fully intended to call it quits after two wineries, we passed another one that looked interesting. Huston Vineyards was on Chicken Dinner Road. The road name alone made us curious. Huston’s tasting room was smaller than the other two, and not quite as crowded on a Sunday afternoon. Robin, our server, told us how the road got its name. In the 1930s, Laura Lamb was well-known for her fried chicken and apple pie. She and her husband, Hugh, were also good friends with Governor Ben Ross and his wife. Laura invited the Rosses to dinner. They discussed the poor condition of the road, which was ungraded and full of pot holes. Laura told him he could have apple pie for dessert if he got the road oiled after the county graded it. After the work had been done on the Lamb’s road alone, someone envious of the preferential treatment painted the words, “Lamb’s Chicken Dinner Avenue,” in big yellow letters on the freshly oiled road. The name stuck.

Huston has two labels, Huston and Chicken Dinner. After tasting the wines, we bought several bottles each of the Chicken Dinner White and Red. 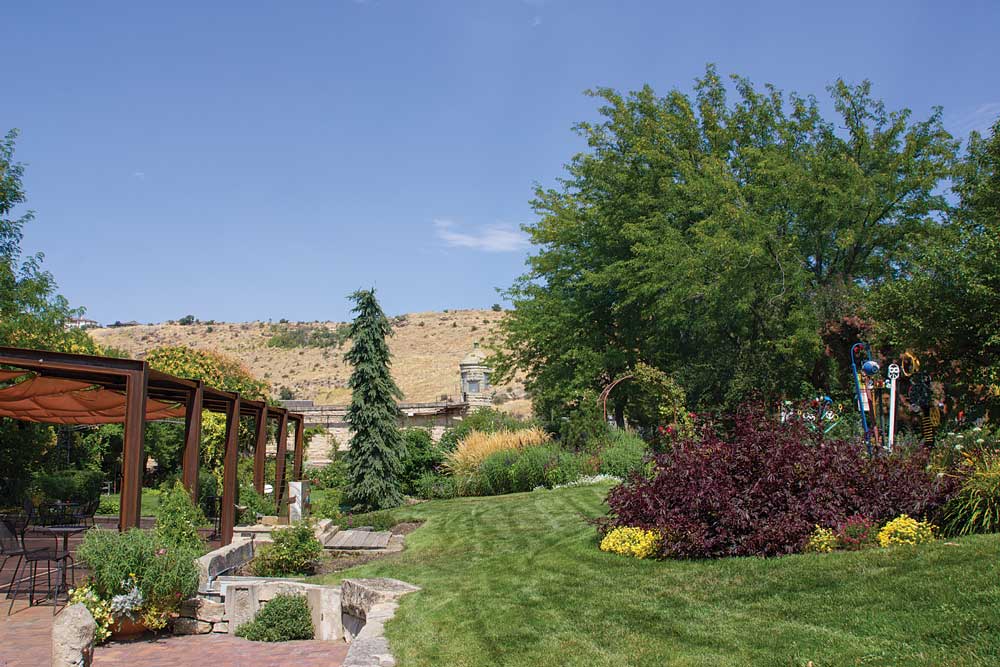 The Idaho Botanical Garden was once known as #2 Yard of the Idaho Territorial Prison; a guard tower is visible in the background.

“A Midsummer Night’s Dream,” William Shakespeare’s popular comedy, was playing at the Idaho Shakespeare Festival’s state-of-the-art amphitheater. We arrived early enough to buy dinner before the show. When we bought our tickets online, the only seats available were general admission on the hillside. I was thrilled to discover we could rent lawn chairs for $2 each, which allowed us to watch the entire show in comfort.

We had arrived in Boise with only a vague idea of how we would pass the time, but trusting we’d find some wonderful adventures to keep us busy. Riding bikes on the Greenbelt was even better than I’d hoped; in addition to seeing the sights, we learned about the inspiring women who helped make Boise what it is today. I checked two items off my bucket list: stand-up paddle boarding and getting out of an escape room alive (the first time we tried it, we were “killed” by a chainsaw murderer). And who knew we could have so much fun in a prison? Maybe it was Shakespeare’s magical love potion that made us fall in love with an entire city. Oh, Boise, we’ll be back! 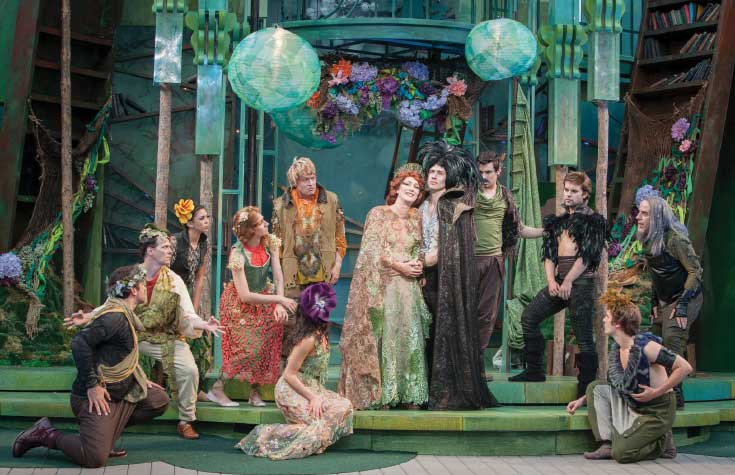