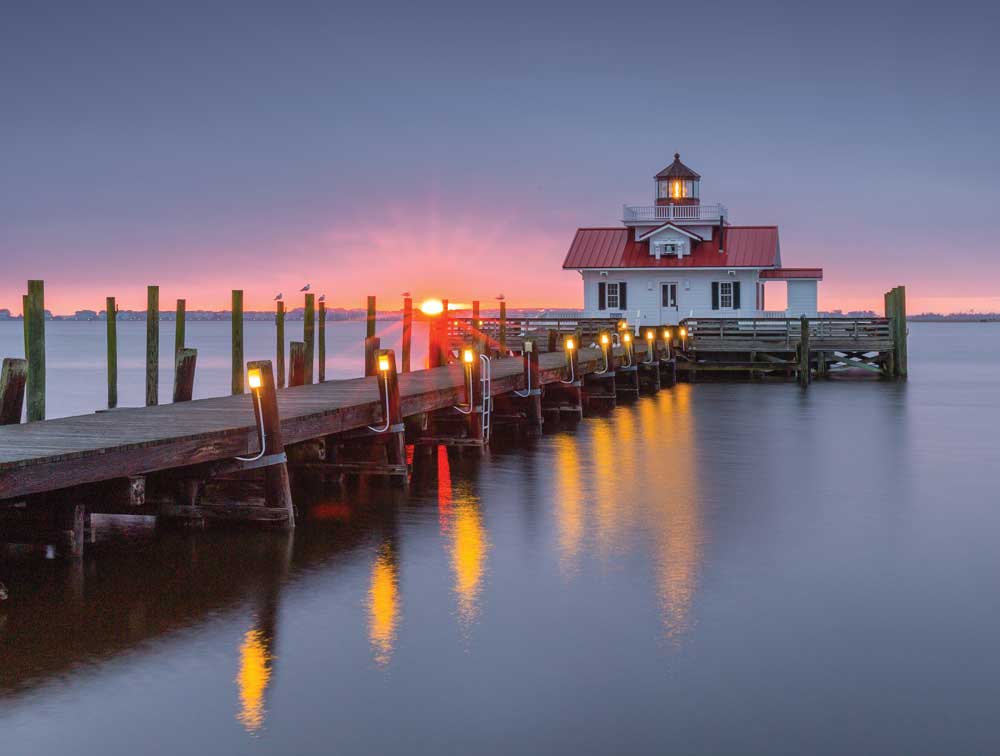 America is blessed with so many beautiful spots, it’s difficult for me to pick a favorite, but one of my top choices is the Outer Banks of North Carolina. My bride of 50-plus years and I recently revisited the Outer Banks (OBX) in mid-October, which is a good time to go because there are less crowds, the weather is mild and most everything is still open. Stretches of public beaches invite sunbathers to enjoy the solitude.

The OBX is a 130-mile-long string of narrow barrier islands off the coast of North Carolina. It covers most of the state’s coastline, separating the sounds of Currituck, Albemarle, Roanoke and Pamlico from the Atlantic Ocean.

We chose to travel the eastern route via Highway 64 through Manteo on Roanoke Island. The area has a lot of historic attractions – the North Carolina Aquarium on Roanoke Island, Fort Raleigh National Historic Site, Elizabethan Gardens, the Lost Colony and the 16th century ship Elizabeth II are just some of them. After a visit to Roanoke Island and Manteo, we crossed Roanoke Sound and landed on OBX near Nags Head (one of the many OBX towns with a colorful name) and North Carolina Highway 12, which would take us the entire length of the barrier islands.

Manteo’s Roanoke Marshes Light is a replica of the cottage-style screw-pile lighthouse that stood at the entrance to Croatan Sound. The lighthouse contains exhibits highlighting the area’s maritime history and guides boats into Shallowbag Bay.

North of Nags Head, along NC 12, were our first two stops: the Wright brothers National Memorial and Jockey’s Ridge State Park. The importance of the first is obvious. This is the exact location of the first flight of the Wright brothers, Orville and Wilbur. The brothers actually completed four flights, although the first three lasted 15 seconds or less and covered a distance of 200 feet or less (the first, on December 17, 1903, covered 120 feet in 12 seconds). However, the fourth flight of 852 feet remained airborne for 59 seconds.
Located near Kitty Hawk, the memorial consists of a visitor center with exhibits and a full-scale reproduction of the Wright brothers’ planes, markers denoting the location of the four flights, a reconstructed hangar and workshop and a sculpture re-creating the original 1903 flight. But, atop Kill Devil Hill, for which the town gets its name, is a very prominent 60-foot monument honoring the Wright brothers and their accomplishments.

Getting There
There are three options for entering the OBX.

The northern route enters via U.S. Highway 158 from the Norfolk, Virginia, area crossing the Currituck Sound.

The eastern route enters via U.S. Highway 64 through Manteo and arrives just south of Nags Head.

Incidentally, if visitors possess a National Park Senior Pass, entrance to the Wright Brothers National Memorial is free. Otherwise, the entrance fee is $7.

Our second stop was Jockey’s Ridge State Park. The significance of this 420-acre state park is not so obvious. It is located in Nags Head, and its claim to fame is that it contains the tallest living sand dune on the Atlantic coast. For the same reasons the Wright brothers chose Kitty Hawk for their attempts, many kiters and hang gliders choose Jockey’s Ridge and its dunes for their adventures – the high dunes, great winds and soft sand landings. Kite-flying is very popular for visitors to Jockey’s Ridge. Some larger kites take in enough wind to pull the kiters along the sandy dunes in practice for kite surfing (similar to water surfing, but using a special board and a four-string kite for propulsion). In addition, the view from the approximately 90-foot-tall dune offers a panorama of Nags Head and the coastline.

Not only do kites dot the sky over Jockey’s Ridge State Park, but hang gliders also take advantage of the tall dunes and great wind. An unusual sight along the coast, hang gliders are usually spotted at higher elevations. But the conditions along the OBX make hang gliding another popular activity. There is even a hang gliding school at Jockey’s Ridge operated by Kitty Hawk Kites. We did not bring a kite, and certainly did not sign up for hang gliding.

Next we picked up NC 12 and headed south along the Cape Hatteras National Seashore and through Pea Island National Wildlife Refuge. 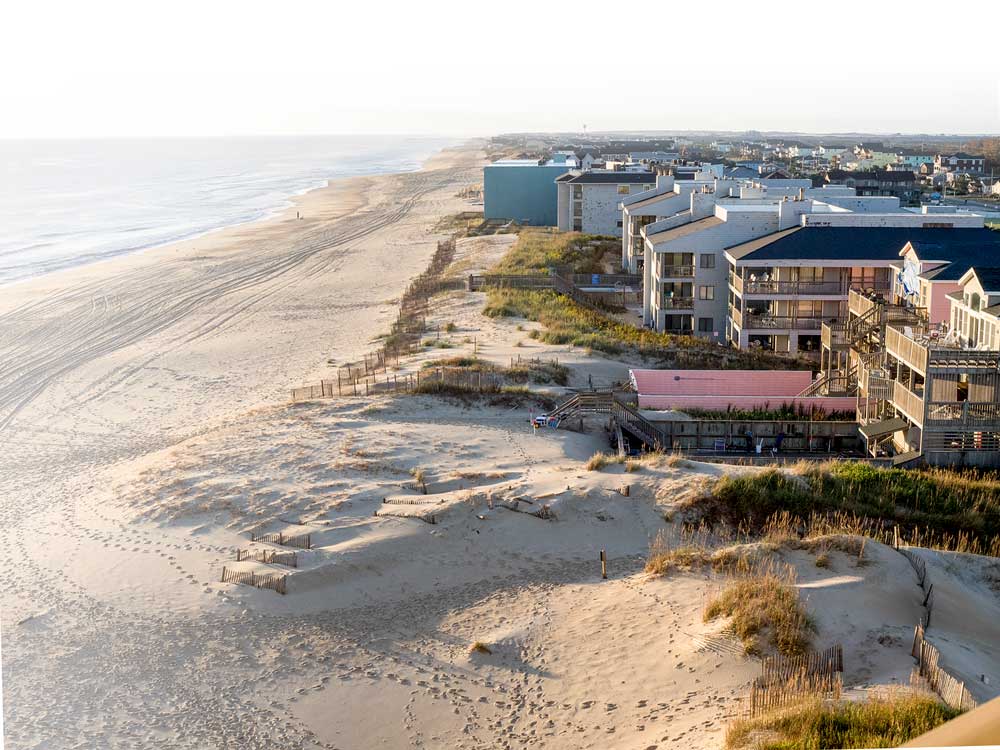 Lighthouses are always favorite stops. Of the several lighthouses on the OBX, four are accessible by motorhome or dinghy vehicle. We visited three – Bodie Island, Hatteras and Ocracoke. The first stop out of Nags Head was the Bodie Island Light Station.

According to the Outer Banks Lighthouse Society, the present lighthouse is the third to be built near the present site. “The first light was a 54-foot tower that began to lean after only two years in service. The second, a 90-foot tower that was blown up by the Confederates, lasted only until 1861. The present tower was built in a new location north of Oregon Inlet. Construction began on the present light in 1870, and it went into service in 1872.”

Farther south of the Bodie Island Light Station, we crossed the impressive Oregon Inlet bridge and arrived in the town of Rodanthe, where we visited the Chicamacomico Life-Saving Station (say that three times fast!). This station commemorates the valiant efforts and the service of the little-known surfmen who braved the waters of the stormy Atlantic to rescue crew members of sinking ships along the stretch of waters known as the “Graveyard of the Atlantic.” Because of newer navigational aids, electronics and helicopters, the need for such stations was reduced. The life-saving stations began in 1848 and Chicamacomico was decommissioned in 1952. 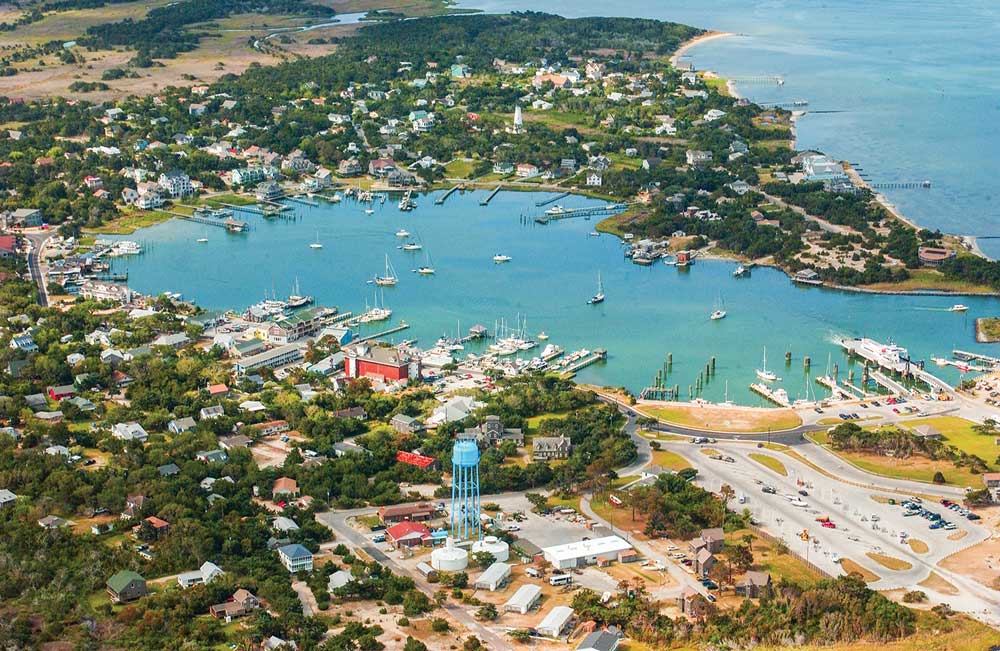 This aerial view of Ocracoke illustrates the village’s beach-centric vibe, including shopping, restaurants and water-based activities.

The notable Cape Hatteras Light Station was our next stop. The daymark of its black-and-white spiral stripes is a familiar sight. This is the lighthouse that in 1999 was moved from near the coastline to a safer location 2,900 feet inland due to erosion. Both the Cape Hatteras and the Bodie Island Light Stations are open for self-guided climbs seasonally, usually the third Friday in April through Columbus Day. The third lighthouse, the Ocracoke Island Light Station, is not open for climbing.

The Graveyard of the Atlantic Museum, in the town of Hatteras near the ferry dock to Ocracoke, is a good place to visit while waiting for the Hatteras/Ocracoke ferry, which runs every half hour to one hour, depending on the season. There is no fee for the ferry and this route does not require reservations, but do arrive early to avoid longer waits. Schedules can be found at www.ncdot.gov/ferry.

Ocracoke Island is a quiet, slow-paced village with plenty of shopping, restaurants and water-related activities. The Ocracoke Island Light Station is one of the most visited spots on the island, but don’t expect to drive the motorhome and park to view the lighthouse; there is very little parking and zero turn-around room. Getting around Ocracoke is best done by bringing or renting a bicycle or the ever-present golf carts. 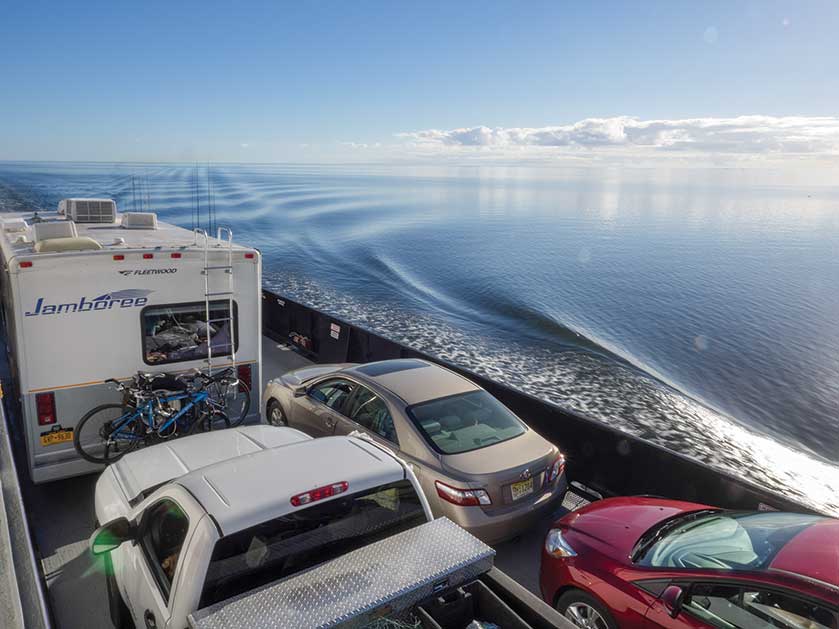 The ferry from Ocracoke to Cedar Island accommodates motorhomes with ease.

The village of Ocracoke surrounds Silver Lake, where the ferries to Swan Quarter and Cedar Island depart. We had reservations for a 7:30 a.m. ferry to Cedar Island. It’s suggested ticketed passengers arrive at the ferry 30 minutes early. Boarding all the ferries is a very efficient operation, and the ferries provide a pleasant and comfortable ride. We were concerned about boarding the ferry with a motorhome, but it was not a problem in our case.

There are plenty of campgrounds scattered along the Outer Banks. The Cape Hatteras National Seashore has four campgrounds, all without hookups, which are on a first-come first-served basis and close seasonally. Full-service RV parks in the OBX include Camp Hatteras RV Resort & Campground, Cape Woods Campground & Cabins, Frisco Woods Campground and Hatteras Sands Campground.

If you visit the OBX, we think you just might discover that it is in fact one of America’s most beautiful spots. Who knows, it might even become one of your favorites.

Wright Brothers National Memorial is on the exact site of the famous first flight in 1903.