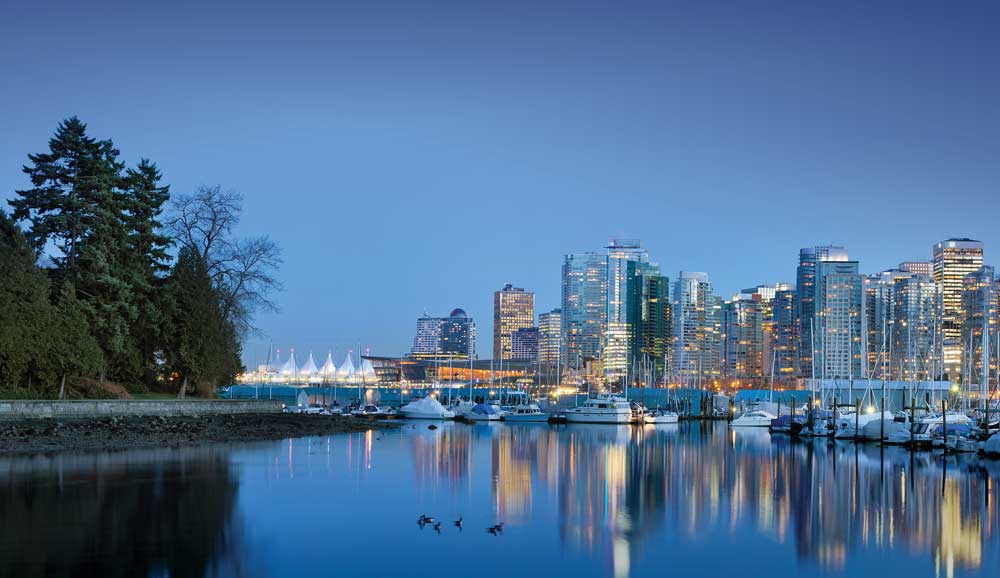 Vancouver, British Columbia, and Washington’s San Juan Islands are so much more than just stopovers on the way to Alaska

Many RVers who want to tour Alaska by land and sea begin their journey in Vancouver, British Columbia. The city receives more than 230 cruise ship calls annually, and the Port of Vancouver is where many Alaskan cruises start or end. We flew into Vancouver early before we headed out on our cruise to Alaska so that we could explore the city, which offers plenty of reasons to stay in the area longer.

Nearly one quarter of the world’s temperate rainforest is in British Columbia; the lush, green forests are filled with towering, centuries-old trees, and receive plenty of rainfall. Although, during our visit there wasn’t a drop of rain — which made it a perfect day to explore the ecosystem in Capilano Suspension Bridge Park and Stanley Park.

Did you know that San Juan County is the country’s first Leave No Trace County? To learn more about the San Juan Islands’ 7 Principles of Leave No Trace, go to
www.visitsanjuans.com/
leave-no-trace

The suspension bridge, originally built in 1889, stretches 450 feet across and 230 feet above the Capilano River. We joined the mass of people making their way across the bridge, all of us taking time to admire the view. Anyone who might be nervous walking on a wobbly bridge can take comfort in knowing the bridge can “hold up to 96 full-grown elephants.” The park covers 27 acres, with attractions on both sides of the river. As we exited the suspension bridge, we found ourselves in the Treetops Adventures, a series of seven suspended footbridges that allowed us a “squirrel’s-eye view” 110 feet above the floor of the rainforest. These bridges are attached to eight 30-ton, 250-year-old Douglas firs. The viewing platforms at each tree are held in place with an innovative tree collar system designed to accommodate the growth of the trees. No nails or bolts penetrate the firs. At Nature’s Edge, a walkway along the edge of the rainforest, we had intermittent views of the Capilano River. After we returned to the east side of the river, we explored the Cliffwalk, 700 feet of cantilevered and suspended walkways along the granite cliff face of the Capilano Canyon.

Seemingly in stark contrast to the lush rainforests, the dramatic skyline of Vancouver is impressive in its urban setting, befitting exploration of its own.

Stanley Park, a 1,000-acre natural West Coast rainforest, is a short 15-minute drive from Capilano Suspension Bridge Park. There are several ways to see the park: take a guided tour in a horse-drawn carriage, drive through in a car, or ride a bicycle. Since we didn’t know much about the park, we opted for a ride in an old-fashioned carriage pulled by two beautiful horses. Our entertaining guide told us about the sights in the park, including the totem poles, Vancouver Harbour, horse stables, coastal red cedar forest and gardens. Since this hour-long tour whetted our appetite for more, we walked back to the rose gardens, then explored the area by car. If we hadn’t been short on time, we would have rented bicycles to ride around the park on the 5.5-mile Seawall loop.

After our Alaska cruise, we disembarked in Vancouver and spent another day touring the city before heading to Washington’s San Juan Island for six days. Just a ferry ride away from Anacortes, Washington, the San Juan Islands entice visitors to enjoy the beauty and recreational activities in this island paradise.

Our first stop in Vancouver was VanDusen Botanical Garden. This 55-acre garden has more than 7,500 plant species from around the world. My favorites were the monkey-puzzle tree, native to Chile and Argentina, and the giant rhubarb plants, which have some of the largest leaves of any plant in the world. The flowering gardens were ablaze with color. Just when we thought things couldn’t get any better, we found the Elizabethan Maze, made from 3,000 pyramidal cedars, planted in 1981. We entered it and got hopelessly lost. Some kids were running through it, trying to beat their previous times. We decided it was in our best interest to follow them out. 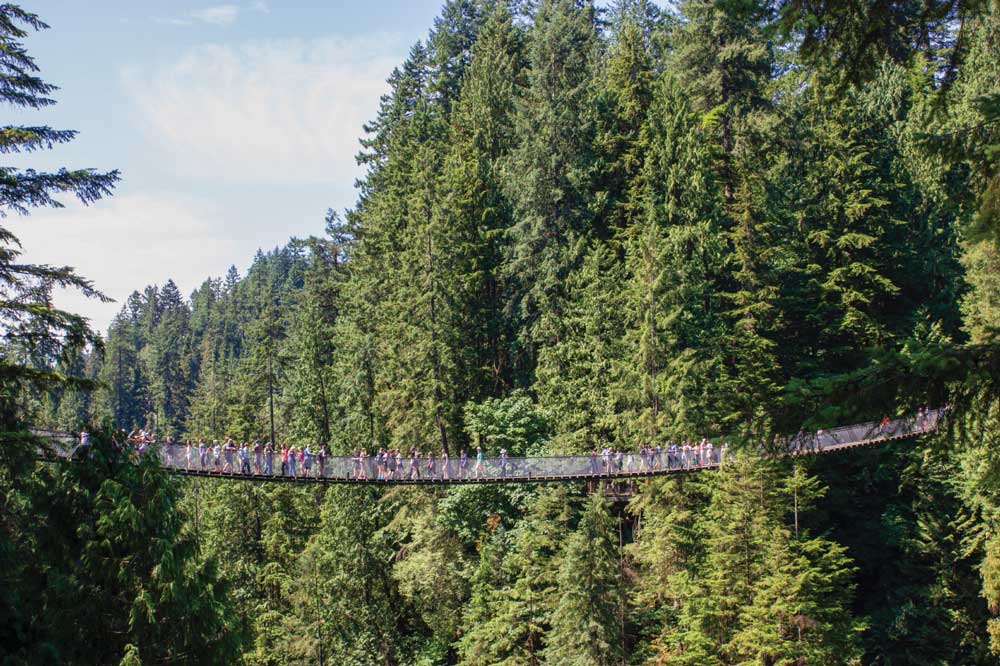 We were eager to pick up our motorhome, which we’d left at Pantec Mini Storage (www.pantecblaine.com), a fully fenced, secure storage lot in Blaine, Washington, during our cruise. While in Blaine, we stopped for dinner at Drayton Harbor Oyster Co., a small oyster bar featuring scrumptious, fresh mollusks. We ordered oysters with several different toppings and devoured them all.

Getting There:
Surrounded by the Salish Sea, the San Juan Islands are nestled between Seattle, Washington; Vancouver, British Columbia; and Victoria, British Columbia. Of the 172 named islands in the San Juans, three main islands — Lopez, Orcas and San Juan — have lodgings, attractions and amenities for visitors.

Taking a motorhome to San Juan Island — the most populous of the San Juan Archipelago — requires some planning since there are only a few RV camping spots on the island. Lakedale Resort at Three Lakes has five RV sites with water and electric hookups, as well as cabin and “glamping” options. The 82-acre resort has three lakes and offers a wide range of outdoor activities. Another camping option is at the San Juan County Fairgrounds, which has eight RV spaces, all with water and electric hookups. There is no dump station on-site and there’s a maximum stay of 10 days. Advance reservations are highly recommended.

It’s also wise to make round-trip reservations for the Washington State Ferry (www.wsdot.wa.gov/ferries) in advance. We arrived at the ferry terminal in Anacortes an hour before our scheduled departure to Friday Harbor, only to find out we would have a four-hour delay due to mechanical problems on one of the ferries. In addition to planning, island life also requires patience.

Most of the visitors we talked to on board the ferry were looking forward to lots of outdoor adventures on San Juan Island, especially biking, kayaking and whale watching. On previous visits to San Juan Island, we had biked and kayaked — we even saw whales breach right next to our boat, but this time we wanted to unwind and spend time with family. My brother-in-law, Charlie, and his wife, Roxanna, live near Friday Harbor — a quaint, walkable town lined with hanging flower baskets, sculptures, boutiques, galleries and restaurants. 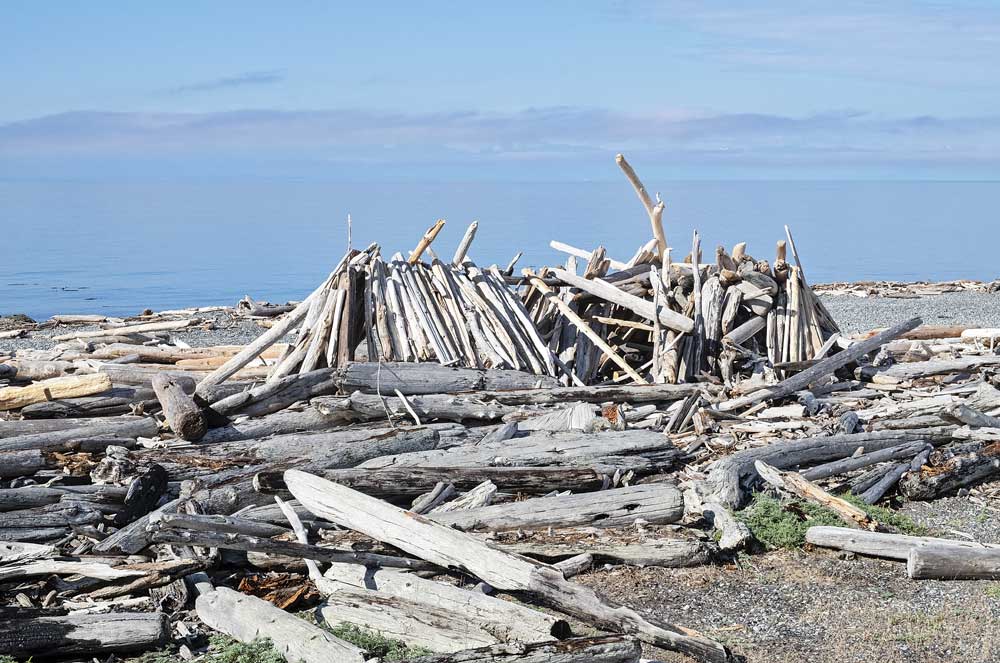 On South Beach in American Camp National Historical Park on San Juan Island, a swath of driftwood provides a makeshift shelter on the beach.

During our time on the island, we sampled the local food whenever possible. Westcott Bay Shellfish Co., located on the north end of the island near the village of Roche Harbor, is an aquaculture farm that hand-raises Pacific oysters, Manila clams and Mediterranean mussels on the tidelands in Westcott Bay. There’s no restaurant, just a retail outlet where we picked harvested shellfish out of saltwater tanks. If you want to eat your oysters raw, you can shuck them yourself at picnic tables, otherwise you can take them home to prepare. Even though I generally prefer cooked oysters — especially in land-locked states — these were so fresh that I enjoyed every slurp. Charlie and Roxanna are avid sailors, and keep their boat in Roche Harbor on the northwest side of the island, so we headed there next. 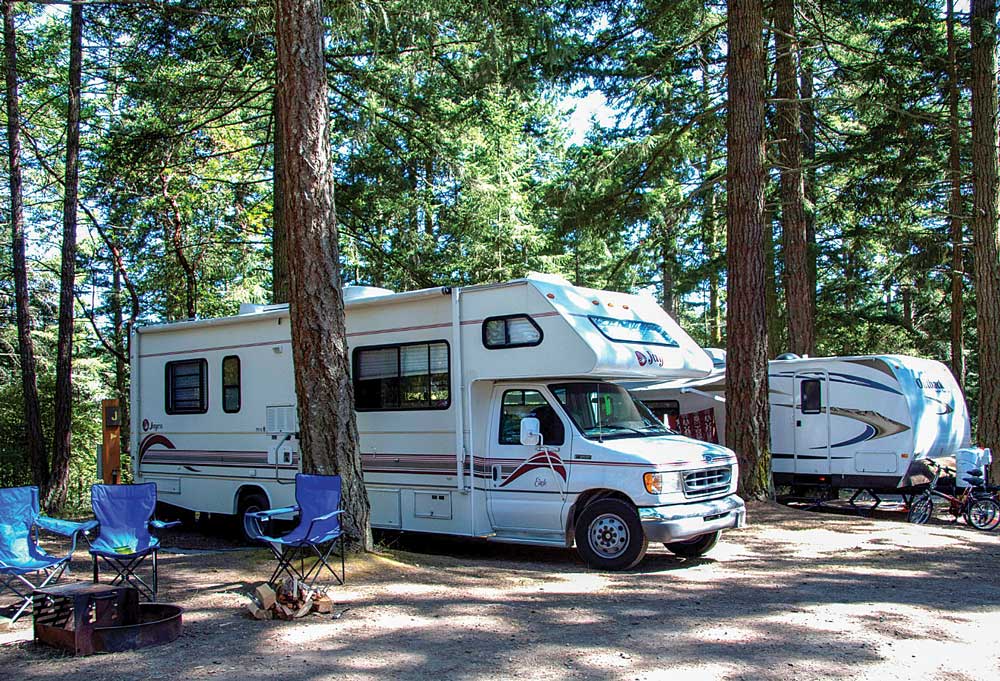 Lakedale Resort at Three Lakes is one of the rare places on San Juan Island that offers RV sites. The resort has five campsites with partial hookups. Photo: Shelley Campbell Bogaert

Roche Harbor is a picturesque resort with a historic hotel, several restaurants, shopping and a marina. The Hotel de Haro is the state’s oldest continually operating hotel, hosting guests since 1886. Fragrant lilies were in full bloom in the hotel’s gardens. We enjoyed lunch at Madrona Bar and Grill, a casual restaurant that extends over the water. Roxanna and I browsed the Village Artist Booths at Roche Harbor Resort & Spa, admiring the photography, jewelry, pottery and other fabulous creations by local artists, including Michael Bertrand. His photo­graphs of the San Juan Islands, tulips in Skagit Valley and the night sky filled us with awe.

After Charlie readied the sailboat, we motored out to the bay. Roxanna loaded two bait boxes with a rotisserie chicken carcass, salmon heads and a leftover tamale, attached the bait boxes to crab traps, and threw them into the water. Over the next several hours, we caught 34 crabs, but only five of them stayed for dinner. The other 29 were tossed back into the bay to live another day. They were either too small, lucky enough to be born female (only the males can be kept), or too hard to eat (Japanese rock crabs aren’t nearly as meaty as Dungeness). We ate the keepers for dinner that night. Yum! 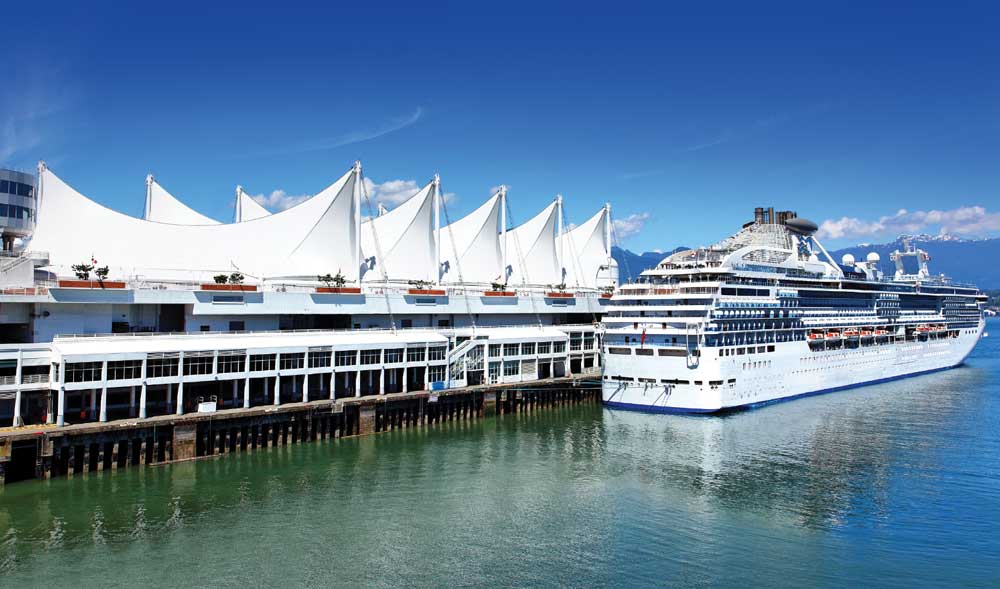 Vancouver offers visitors a variety of ways to enjoy the fruits of the sea, from cruise ships to fishing charters to whale-watching excursions to boat rentals and more. Photo: Mary Zalmanek

Since the San Juan Islands Sculpture Park and Nature Preserve is near the marina, we stopped there on the way home. Founded in 1998, and originally called the Westcott Bay Institute for Art & Nature, the park is run entirely by volunteers. More than 150 pieces of outdoor art are displayed in the 20-acre park, the largest sculpture park in the Pacific Northwest. The exhibition changes frequently as new pieces are installed, existing pieces are sold and pieces rotate out after a two-year display. In addition to the outdoor art, the park honors the written word. Beside the five trails in the park, there are 56 signs with short poems by David M. Jenkins. My favorites were “IN THE WILD, the sick never complain, lest they be overheard,” and “SCIENCE 102, if you find what you were looking for, you weren’t looking hard enough.” 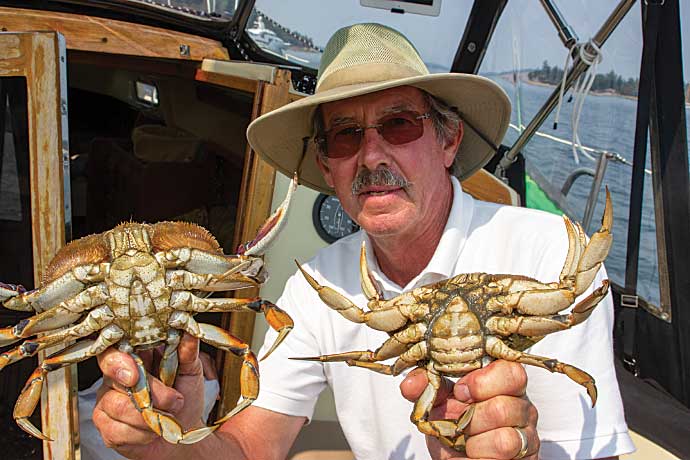 Charlie Zalmanek explains that if a crab’s abdomen (the flap of shell that folds under from the rear) is narrow, it’s a male; if it’s wide and rounded, it’s a female.
Photo: Mary Zalmanek

Pelindaba Lavender Farm, 6 miles west of Friday Harbor, is a beautiful place to visit; acres of lavender are accented with graceful metal sculptures by local artist Micajah Bienvenu. It’s also a great place to shop for more than 250 lavender-based products. Essential oils are extracted from flowers grown in organically certified fields. The flowers and essential oils are used to make botanical, culinary, personal-care, therapeutic, household, and pet-care products. I’ve been using their culinary lavender to make lavender pepper steaks for years. On this trip, we tried their delicious lavender ice cream for the first time. They also offer lavender teas, oils, vinegars, chocolates and coffee.

On our last full day, we walked on South Beach in American Camp National Historical Park. We marveled at a broad swath of driftwood that had washed up on the beach and we spotted a bald eagle soaring overhead. The wind in my hair and the waves lapping at the shore seemed the perfect goodbye to our island getaway. 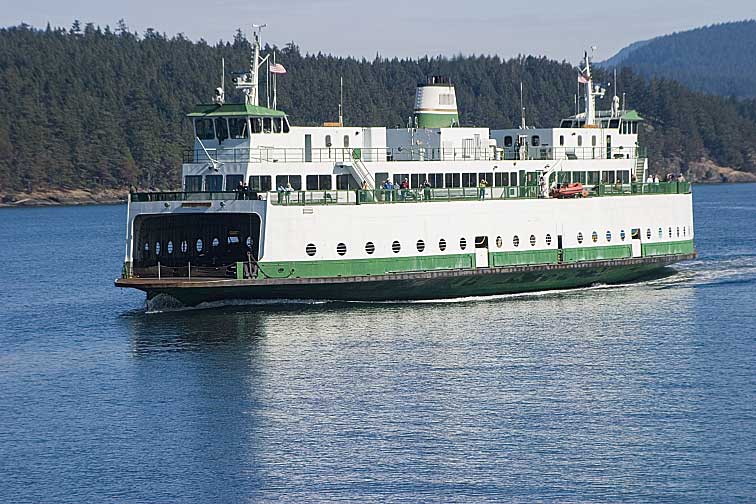