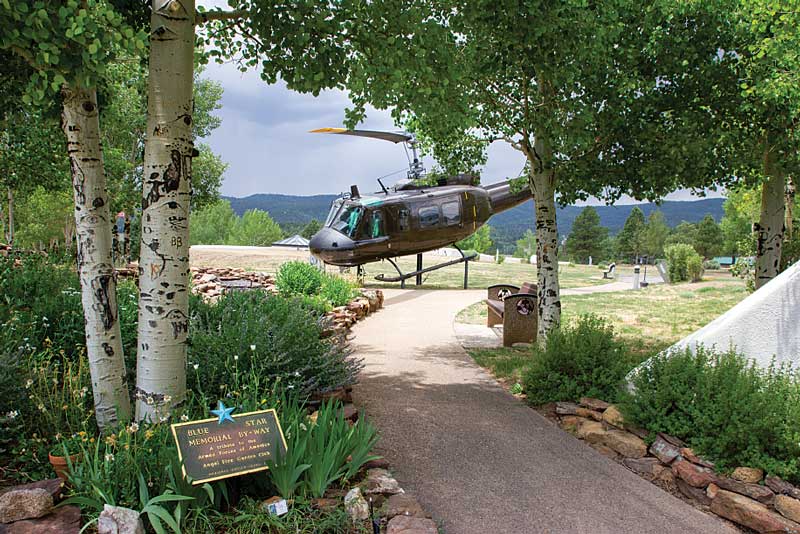 The Land of Enchantment delivers with competitions, craters, an art colony, curative waters and crawls through portals in time

Northern New Mexico is an area my husband, Jim, and I have spent a lot of time driving through on our way to somewhere else. For years we’d been promising ourselves we’d spend a week or so revisiting a few favorite locales and exploring others for the first time. We finally made good on our promise.

Our first stop was the National Rifle Association’s Whittington Center, 10 miles south of Raton on U.S. Highway 64. The site, in the Sangre de Cristo Mountains, covers more than 30,000 acres, with 10% of those developed to include 17 shooting ranges, two adjacent campgrounds with 120 full-hookup RV sites, a museum and other facilities. The ranges accommodate every type of shooting, from pistols to rifles, black powder, shotguns and archery. They offer training, youth programs, guided hunts and competitions. The Frank Brownell Museum of the Southwest has more than 200 firearms displayed in exhibits that tell the history of the region and the role firearms played.

We’ve stayed at Whittington many times over the years, usually just a one-night stay in the campground. Once we stayed long enough to practice target shooting on the pistol range. This time we donned our ear protection and watched some of the long-range competitions. In the extreme long-range “King of 2 Miles,” three-person teams consist of a shooter, wind coach and spotter. Steel targets were placed from 1,500 to 3,500 yards. While I couldn’t actually see the targets, the reaction of the competitors and the crowd let me know which shots hit their marks.

During our stay at Whittington, we visited two nearby attractions that had been on our list for years: Capulin Volcano National Monument and Sugarite Canyon State Park. At a mere 60,000 years old, the Capulin Volcano is the newest one in the Raton-Clayton Volcanic Field. Periodic volcanic activity in the area began 9 million years ago. We explored the well-preserved volcano on the Crater Rim Trail, a paved 1-mile loop around the rim. Near the top of the trail, we saw how lightning had taken a big chunk out of a bench. A sign warned that “exposure and standing on an iron-based volcano increases the chance of being struck” by lightning. Since there were no ominous clouds in the sky, we continued our hike.

Sugarite Canyon State Park is a 3,600-acre park bordering the Colorado-New Mexico state line. Sugarite (pronounced shug-ur-eet) was an early 20th century coal-mining camp. Fishing is a popular activity in the 120-acre Lake Maloya and the 3-acre Lake Alice, which are stocked with rainbow and brown trout. There are two campgrounds: Gambel Oak accommodates groups and Lake Alice has seven RV sites with full or partial hookups. The park is heavily forested with ponderosa pine and gambel oak.

At the Vietnam Veterans Memorial State Park in Angel Fire, a Huey helicopter that flew during the Vietnam War seems to be hovering quietly above the garden. Photos by Jim and Mary Zalmanek

After three days at the Whittington Center, we moved on to Taos, about a two-hour drive on Highway 64. We took a slight detour to visit the Vietnam Veterans Memorial State Park in Angel Fire. The distinctive curves of the white chapel drew our attention as we approached. A Huey helicopter that flew during the Vietnam War seemed to be hovering quietly above the garden. I found the story behind this memorial especially touching. After U.S. Marine Corps First Lieutenant Victor David Westphall III was killed in battle on May 22, 1968, his parents, Jeanne and Dr. Victor Westphall, decided to honor the memory of their son and the 15 men who died with him. They used money from David’s life insurance to build the chapel. It was dedicated on the third anniversary of his death, when opposition to the war was increasing. This was the first major memorial to honor Vietnam veterans, predating the Vietnam Veterans Memorial in Washington D.C. by more than 10 years. 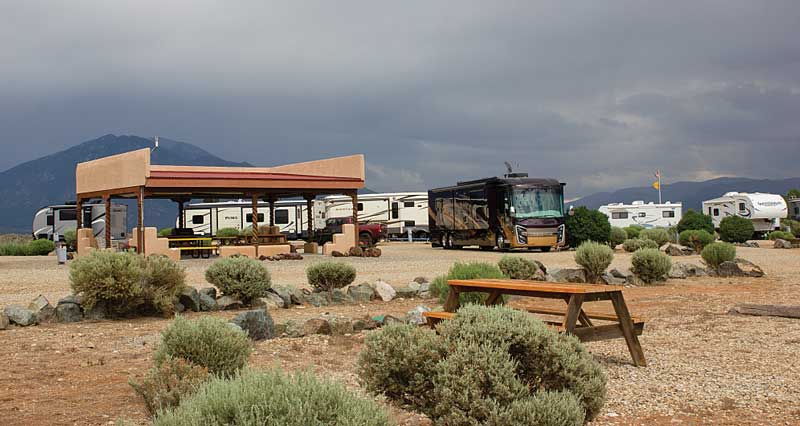 Monte Bello RV Park has 19 RV sites with full or partial hookups and a centrally located pavilion with tables and barbecue grills.

Monte Bello RV Park, about 10 minutes north of downtown Taos, was our home for the next four nights. In this gated RV park there are 19 RV sites with full or partial hookups, a centrally located pavilion with tables and barbecue grills, spacious level sites and a nice view of the mountains.

Over the years, it was those mountains that enticed us to visit Taos, either to mountain bike or ski. A favorite bike ride was the South Boundary Trail, which runs from Angel Fire to Taos in the Sangre de Cristo Mountains, with about 20 miles of challenging single track. Taos Ski Valley has an average annual snowfall of more than 300 inches and more than 1,200 skiable acres, making it a popular winter destination. But no matter what the purpose of our visit, we always found time to browse the art galleries and museums, and to enjoy the restaurants.

Taos is an art colony that has been attracting and inspiring artists for more than a century. In 1917, Mabel Dodge Luhan, a wealthy heiress from New York, settled in Taos. She invited artists and writers, including Ansel Adams, Georgia O’Keeffe, D. H. Lawrence and Gertrude Stein, to be inspired by the area and each other. Today the Mabel Dodge Luhan House is a historic inn and conference center that offers artistic, literary and personal growth workshops throughout the year.

History buffs may enjoy a visit to the Kit Carson Home and Museum. Kit Carson was born in 1809 in Kentucky and moved to Taos when he was 16. He was a fur trapper, wilderness guide, Federal agent to the Ute and Taos Pueblo tribes, and U.S. Army officer. We watched a film about his many adventures that made him famous. After the film, the museum’s director, C. J. Law, answered questions from the audience. As we examined exhibits in the four-room museum, we noticed Law engaging visitors, especially children; he encouraged them to touch an animal pelt and talked about things they learned in the museum.

Every trip we take to Taos usually includes dinner at Lambert’s of Taos. We’ve been fans of Lambert’s ever since we had its grilled radicchio salad more than 20 years ago. The chef is always doing something creative with veggies that’s new to me.

The Rio Grande Gorge Bridge is located 5 miles west of Monte Bello RV Park. At 650 feet above the Rio Grande, it’s the fifth-highest bridge in the U.S. After parking at the rest area on the west side of the bridge, we walked to the overlooks to admire the scenic river gorge. To get a view of the bridge itself, we hiked part of the 6-mile West Rim Trail. While the bridge was being built in 1963, it was called the “bridge to nowhere” because funding wasn’t available to continue the road on the other side of the bridge. 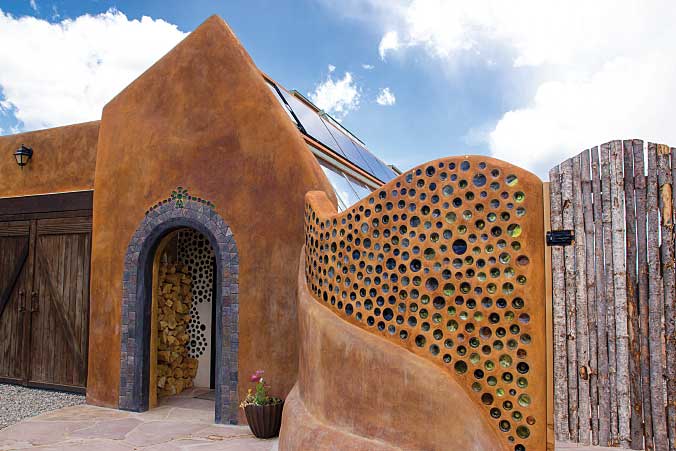 This Earthship home uses passive solar architecture and thermal mass construction, and relies on natural energy sources, allowing it to be off the grid.

Today, Highway 64 extends from that bridge, taking people to interesting places like Earthship Biotecture’s Greater World Community. An Earthship is an autonomous building made from natural and recycled materials such as earth-packed tires and empty wine bottles. The homes use passive solar architecture and thermal mass construction, and rely on natural energy sources, allowing them to be off the grid. The 640-acre Greater World Community is the first Earthship subdivision, split into 1-acre lots. We took a guided tour through the visitors center and several homes. The completed homes were beautiful and functional. The one under construction, which was strewn with tires, cans and bottles, was fascinating because we could see how they are built.

When we left Taos, we crossed that bridge one last time and headed to Ojo Caliente Mineral Springs Resort and Spa. We’ve stayed at Ojo Caliente many times in the last 30 years, and it just keeps getting better, undergoing numerous major improvements (the first bathhouse was built in 1868). The spa has 11 pools, fed by more than 100,000 gallons of geothermal mineral waters that contain lithium, sodium, iron, soda and arsenic. These waters are believed to relieve digestive problems, depression and symptoms of arthritis, and benefit the immune system. During our two-day stay, we soaked in most of the pools, had a massage and slathered mud on our bodies in the Mud Area.

Ojo Caliente’s Artesian Restaurant is known for its tasty farm-to-table meals. Not only did we enjoy one of those meals, we happened upon the 2-acre farm while riding our bikes. Jared, the farm manager, and his apprentice, John, were tending the fields. I noticed they were both barefooted. Jared told me with a grin that’s so they can do “farm yoga.” They even demonstrated their stretches for us while they tended their arugula. The taste of that peppery leaf they shared with us was so good that we went to the gift shop to buy some for our evening meal. That night we sat outside our motorhome in Ojo’s partial-hookup RV park surrounded by cottonwood trees enjoying our own farm-to-table salad. 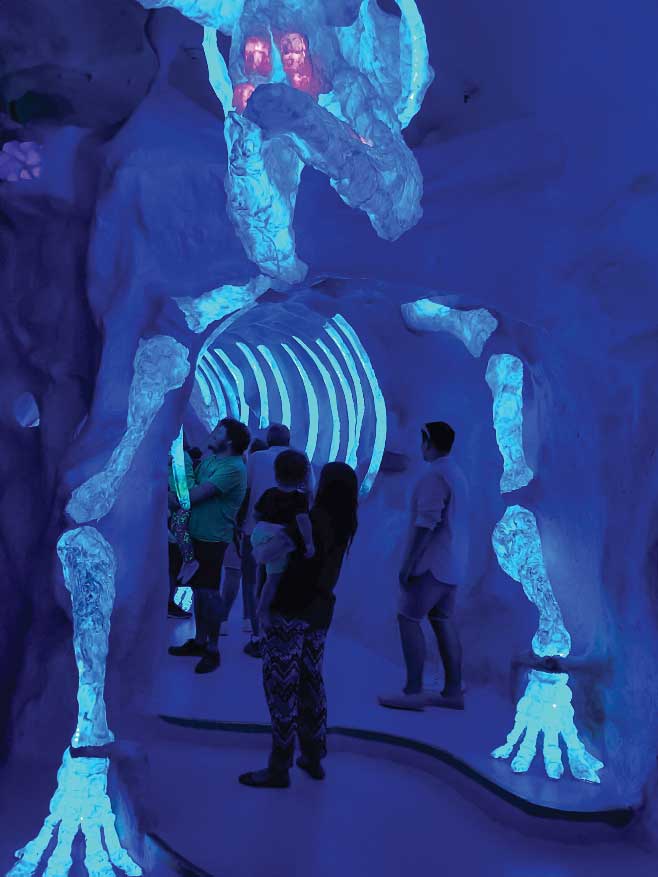 At Meow Wolf, you can crawl though a fireplace and end up in a cave with a glowing mastodon skeleton.

The last stop on our New Mexico tour was one I’d been excited about for more than a year. Just a little more than an hour’s drive from Ojo, we arrived at Meow Wolf to be greeted by a 30-foot-tall red robot and a giant spider that seemed to be watching over the activity in the parking lot. Meow Wolf is an arts and entertainment group that “creates immersive, interactive experiences to transport audiences of all ages into fantastic realms of story and exploration.” With support from “Game of Thrones” creator and Santa Fe resident George R. R. Martin, this group of nearly 200 artists across all disciplines transformed a former bowling alley in Santa Fe into the House of Eternal Return. Imagine a Victorian house with portals to other worlds. You can crawl though the fireplace and end up in a cave with a glowing mastodon skeleton or walk into the refrigerator and come out in a fantasy world.

There are two ways to explore the House of Eternal Return: You can simply wander through, admiring the art and creativity, or you can try to solve the mystery. What happened to the Seligs, the family who lived in this house? Was there a rupture in the space-time continuum? If you want to solve all the mysteries in this sci-fi fun house, you may need to buy an annual pass.

We were thoroughly enchanted in New Mexico, the Land of Enchantment. It’s no wonder we keep coming back for more.