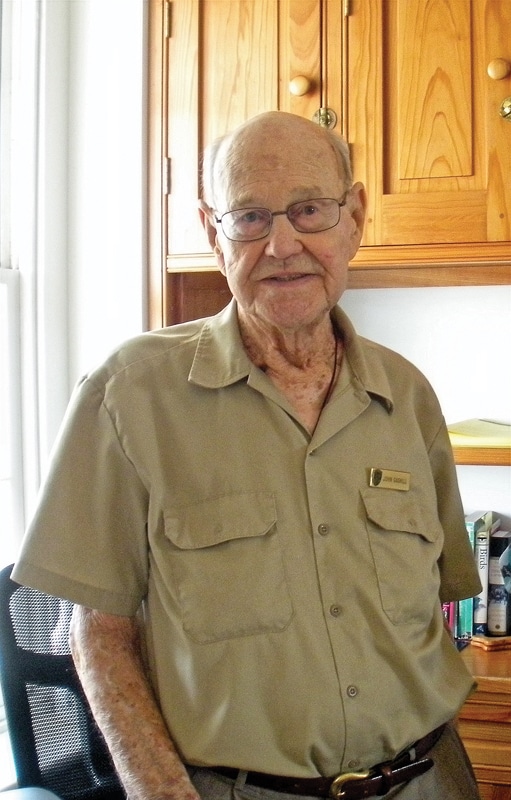 Warm weather had arrived, my husband,  Bob, announced he had four days off of work and I wanted to try dry camping without hookups. So we packed up our newly acquired 2006 Class B diesel Sprinter van, headed for North Carolina’s Outer Banks and launched our plan to see three of our state’s most historic lighthouses.

As the crow flies, Cape Hatteras is more than 30 miles offshore from the U.S. East Coast mainland across Pamlico Sound. We decided to start our trek at the north entrance to the Cape Hatteras National Seashore just below Nags Head, drift south down Highway 12 at our leisure, and return west across the big sound via ferry.

Our first stop was the National Park Service (NPS) Visitor Center at Bodie Island Lighthouse where a serendipitous encounter awaited with an occasional NPS volunteer, John Gaskill, 95, son of the last lighthouse keeper. I asked him about the 1921 wreck of the schooner Laura Barnes, since pre-trip research revealed that fragments of the vessel are still visible across the highway from the lighthouse.

“Here’s a photo of the ship when she went aground,” Gaskill said, opening the book he wrote about summers and holidays at the isolated lighthouse from 1919 to 1940. He told us that his father salvaged some of the ship’s timbers to build the family’s home up in Wanchese where the Gaskill children lived with their mother during the school year.

After saying goodbye to this kind living link to Bodie Island’s past, we walked out on the Coquina Beach boardwalk. There they were – a few planks from the Laura Barnes’ keel, now almost buried in the sand.

We traveled south across the tall bridge at Oregon Inlet, a jumping off point for deep-sea fishermen, through the tall dunes of the serene Pea Island National Wildlife Refuge. After driving through the town put on the map by the novel and movie, “Nights in Rodanthe,” we opted for a night in Waves, a village further south where a reasonably priced RV park by the sea had showers and 30-amp hookups. After Bob leveled the motorhome with homemade wooden blocks, we climbed over the dunes for a walk on the hot sand.

Day two’s destination was the landmark Cape Hatteras Lighthouse, completed in 1870 and the tallest brick lighthouse in the United States. Visitors lined up to climb 248 cast-iron steps to the top, but on this steamy morning we ducked into the Visitor Center and museum to learn more about a monumental feat – engineers moved this lighthouse 2,900 feet southwest in 1999 when erosion threatened to topple it into the sea.

The Graveyard of the Atlantic Museum on the tip of Hatteras Island holds fascinating maritime artifacts like a WWII Nazi Submarine Enigma machine.

In Hatteras Village at the tip of the island, we made a beeline for the Graveyard of the Atlantic Museum. Packed with Outer Banks maritime goodies from pirate days to World War II, this collection of artifacts, like an Enigma code machine from the U-85 Nazi submarine sunk nearby in 1942, is a must-see.

After tearing ourselves away from the exhibits, we drove around the corner to the dock and lucked into the last spot on board the noon ferry boat before the crew closed the gates.

The free, no-reservation, 40-minute trip from Hatteras to Ocracoke Island was a scenic break for lunch in the motorhome. We noticed that large RVs would be right at home on board, too; according to the Department of Transportation, “any RV that can legally operate on the highway” can be accommodated on DOT ferries.

Wild “Banker ponies” on Ocracoke, descendents from 18th century shipwrecked horses? No one knows for sure.

Before leaving home, we had reserved two nights online at the NPS Ocracoke Campground and upon arrival were invited by the campground host to select a spot and report back to him. All sites were on the ocean side of the highway with sand dunes leading to a gloriously empty beach, so we picked a space surrounded by tall bushes to set up housekeeping. The NPS website offered pithy advice, “Mosquitoes may be a problem, netting and insect repellent are recommended,” but a strong breeze from the Atlantic Ocean kept the rascals at bay.

We set off to visit a wooden corral where banker ponies live as pampered guests of the NPS. Though no one really knows, locals believe the stocky beasts are descendants of horses that swam ashore from shipwrecks in the 16th and 17th centuries. Signs explained that these small, shaggy horses are physically different than most breeds, with fewer ribs and vertebrae.

Ocracoke Village is just a few minutes drive from the campground, so we drove to the 65-foot white lighthouse to snap a few pictures. Bob had no trouble backing our motorhome into the tiny parking lot, but people in larger rigs could either leave their RV at the campground or park near the NPS Visitor Center in the heart of town. This compact island village of clapboard cottages tucked into narrow lanes, some paved with oyster shells, is ideal for exploring on foot or a rental bike.

Back at the campsite, we applied mosquito repellant, grilled a couple of steaks and congratulated ourselves on adapting so easily to dry camping. After searching the dark sky for shooting stars, we drifted off to sleep to the sound of waves crashing on the beach behind the dunes.

Our trip’s good fortune held the next day – after touring the Ocracoke Preservation Society museum, we learned that a National Oceanic and Atmospheric Administration research vessel was holding an open house that afternoon. We went aboard and chatted with the RV-8501’s crew of marine archaeologists and biologists about their expedition to survey remains of sunken military vessels off the North Carolina coast.

Ocracoke provides a poignant reminder to visitors of how close World War II came to American soil. Its British Cemetery holds the remains of four English sailors whose bodies washed ashore after their trawler, the HMS Bedfordshire, was torpedoed and sunk by a German submarine in 1942 while on duty helping guard America’s coast. The town buried the dead and deeded land to Great Britain for the cemetery, maintained to this day by Ocracoke Coast Guard Station personnel.

On our final morning, we packed up and headed into the village for Sunday brunch before heading for the ferry dock. The ride across Pamlico Sound back to Cedar Island on the mainland was a little over two hours, so we reviewed our digital photos, savored our memories and began listing all the things left to do on our next Outer Banks getaway. 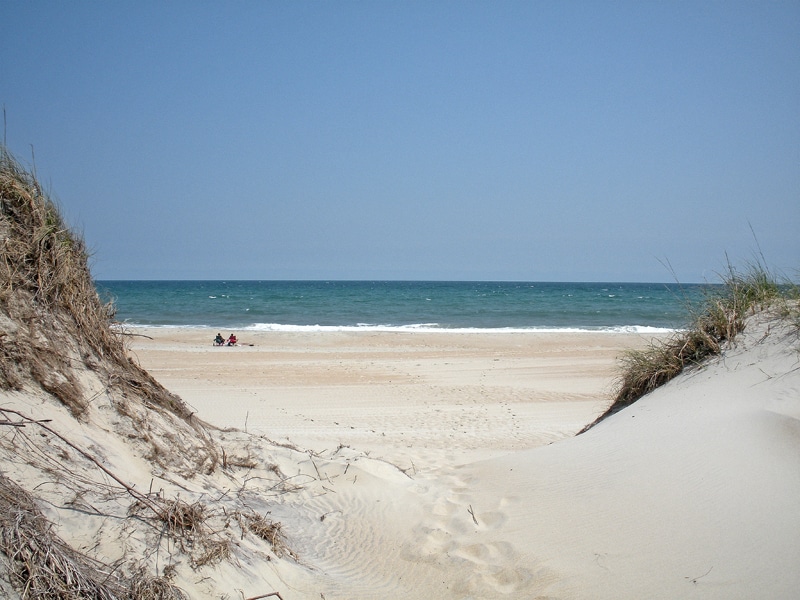 Graveyard of the Atlantic Museum

Ocracoke Campground is open April 1 to October 31 and has 136 sites that can be reserved up to six months in advance. The price in 2011 was $23 per night. (Half price with a life time Senior Pass.) Sites have restrooms, unheated showers, potable water, grills and picnic tables. Reservations can be made at www.recreation.gov or by calling 877-444-6777.