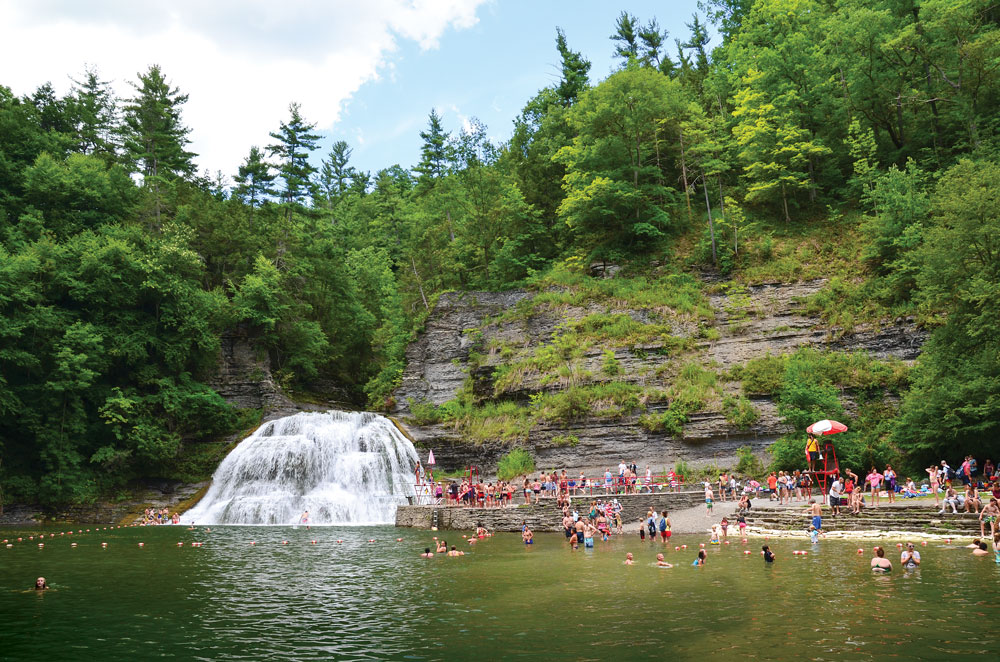 According to an Iroquois legend, the Great Spirit created the Finger Lakes by placing his hand on what is now west-central New York. Then he said: “Go forth, my children, to the land I especially prepared for thee, and there all shall find peace and happiness.” History shows that did not work out well for the Iroquois, but a visit to the Finger Lakes clearly proves the land is blessed.

The region is famous for its lakes (actually carved by glaciers), waterfalls and gorges, as well as its rolling farmlands, vineyards and numerous state parks, referred to as the “jewels on the fingers.” Eleven of these parks have campgrounds with RV sites, most with electric hookups.

Taughannock Falls State Park, one of our favorites, has two main attractions: the falls, the highest in the East, plunge 215 feet over cliffs that tower 400 feet above a gorge, and 40-mile-long Cayuga Lake, which covers 42,956 acres. The Gorge Trail and both the North and South Rim trails offer spectacular views of the falls, and an overlook can be reached by vehicle as well. Note that parts of the Gorge Trail are now closed for renovation until 2017. On this visit, we were lucky because the falls had an impressive water flow.

Robert H. Treman State Park’s mountain pool provides a unique opportunity for swimming at the base of thundering waterfalls.

In addition to the campground and beach, Taughannock Falls State Park has a marina with boat launching and docking, a picnic area, a bathhouse and pavilions. My wife, Linda, and I enjoyed the falls and then sat by the shoreline, soaking up the sun and feeling the warm breeze caress us while listening to the whispering waves.
A few miles south of Taughannock Falls is Ithaca, known as “the biggest little city in the world” because of its cosmopolitan ambience and for being home to famous Cornell University. The campus overlooks Cayuga Lake and covers more than 13,000 acres. Both the university and the city have much to offer: fine restaurants, shops, historic buildings, colorful botanical gardens and lake cruises, among other attractions.

Buttermilk Falls State Park sits at the southern end of Ithaca. A stream-fed-gorge pool for swimming, 10 waterfalls to view and a 46-site campground all make for an enjoyable visit. This waterfall park — like the others — is best visited when there has been sufficient rain. A dry spell can easily turn the thundering water of 500-foot Buttermilk Falls into trickles.

A few miles south of Buttermilk Falls is spectacular Robert H. Treman State Park with 12 waterfalls within a 3-mile gorge. I hiked the moderate Gorge Trail as far as Lucifer Falls, which plunges 115 feet, and was rewarded with impressive views of waterfalls and steep cliffs rising into the sky. The campground and stream-fed pool with a waterfall are reached via the main entrance to the park. The pool was a perfect place to cool off with a swim, especially after hiking. Linda accompanied me to the natural pool and waterfalls — she likes short, flat walks.

To the west is Seneca Lake. Stretching 38 miles and covering 43,343 acres, it has the largest surface area of the 11 Finger Lakes. Like most of the lakes, Seneca offers great fishing, boating and swimming opportunities. Sitting on the southern shore is the town of Watkins Glen, famous for Watkins Glen International racecourse, which is actually located in nearby Montour Falls. The track covers 1,100 acres with a 3.4-mile road-racing course that you can experience in your own vehicle while following a pace car, but obviously not when real races are taking place!

Awe-inspiring Watkins Glen State Park is the most popular state park in the Finger Lakes region. From the entrance, the glen stretches west almost 2 miles, and its stream descends 400 feet past 200-foot cliffs and over 19 waterfalls. Underwater sediment formed the rock walls more than 300 million years ago. During the summer, a shuttle bus can eliminate hiking both ways. The park has picnic grounds, a campground and an Olympic-size pool. On one of our visits, the area was suffering from a major heat spell. When I entered the gorge, it felt like I’d walked into an air-conditioned room — so cool and comfortable. 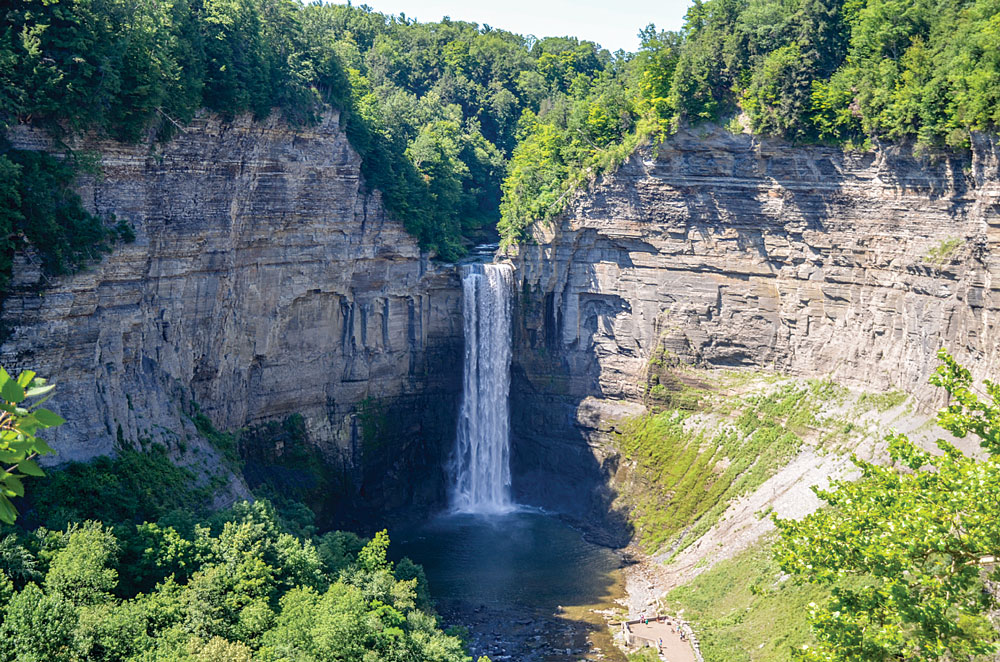 Taughannock Falls plunges 215 feet from the towering cliffs of a natural amphitheater.

With more than 100 wineries, the Finger Lakes region is one of the largest and most respected wine-producing areas in the country. Four clearly marked wine trails — Canandaigua, Keuka Lake, Seneca Lake and Cayuga Lake — lead to vineyards for wine tasting. We toured on our own, but transportation services can be arranged through www.fingerlakes.org.

For beer aficionados, there is a budding microbrewery industry and even a Finger Lakes Beer Trail. And if you like to play golf, the Finger Lakes Golf Trail leads to four challenging courses. 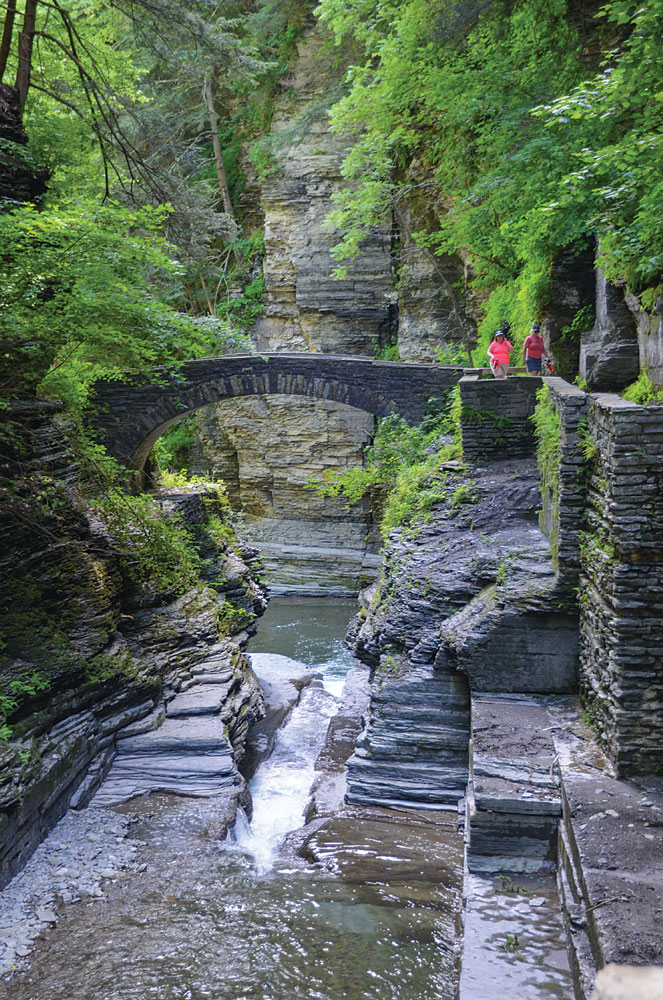 Even if you don’t do the wine tasting, following the wine trails gives an overview of the region’s lush landscape. We imagined what life was like here for the Iroquois who lived in small hillside and lakeside villages where they fished and farmed hundreds of years ago. Unfortunately for the Iroquois, they sided with the British during the Revolutionary War. In retaliation, General John Sullivan and the Continental Army carried out a scorched-earth campaign in 1779, burning down villages and annihilating the Iroquois.

Sullivan’s campaign destroyed the once-powerful and feared Iroquois Confederacy (also known as the Six Nations of the Iroquois), taking their land for the new nation. Nevertheless, their ancestors and impact remain today. All of the Finger Lakes and many of the towns are still called by their Native Indian names, and their history and influence are now celebrated.

Over the past few decades, the Amish have moved into the region and bought farms that had been bankrupted by the high cost of modern farming methods, and then made them profitable by living and farming with a 1800’s lifestyle. Amish farms can be spotted easily because they have no electrical lines going to the houses or barns, and no cars or tractors are used. Amish people travel the country roads in traditional horse-drawn buggies.

For a taste of history, we visited Seneca Falls. Once called “a hotbed of radicalism,” it is considered the birthplace of the women’s rights movement. Here, in 1848, feminists Elizabeth Cady Stanton and Jane Hunt organized the Women’s Rights Convention, attended by more than 300 women and men. Later, they drafted a Declaration of Sentiments modeled after the Declaration of Independence. It called for the then-radical idea of letting women vote and expanding other rights. 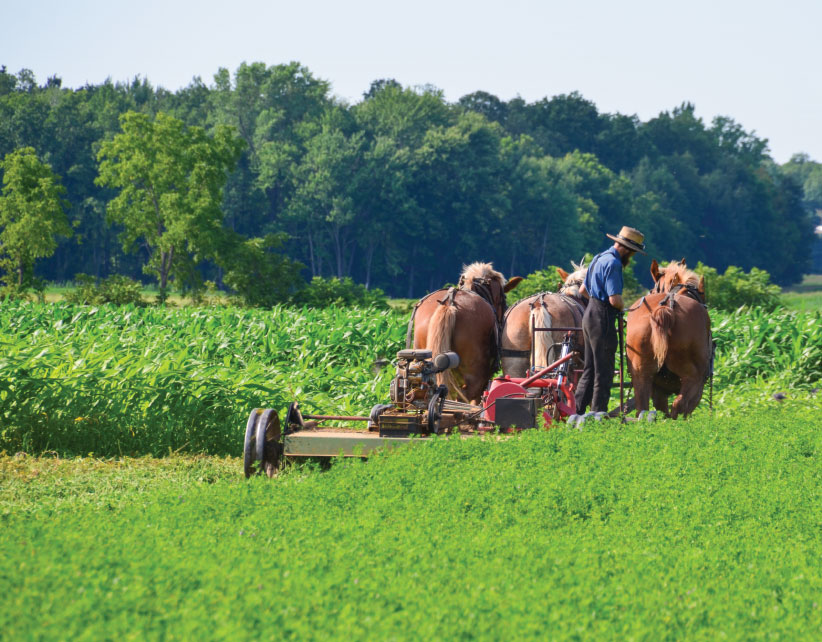 Recalling the simplicity of the 1800s, an Amish farmer plows his field using clean, efficient and economical horse power.

Fittingly, Seneca Falls is home to Women’s Rights National Historical Park and the National Women’s Hall of Fame that honors the accomplishments of women in the fields of science, education, business, social welfare and music. The antislavery and temperance movements of the 1800s also found fertile ground in Seneca Falls.
Located 5 miles east of Seneca Falls is 9,809-acre Montezuma National Wildlife Refuge, created in 1938 as a breeding ground for migratory birds and other wildlife. Today, it is also home to six active bald eagle nests that can be viewed from Armitage Road off State Route 89.

In the 1600s, a Jesuit missionary working with the Cayuga Indians wrote about the area, “The sunlight over the marsh was actually shut off by clouds of ducks and geese, and the woods abounded with deer.” It’s unlikely you will experience that extreme, but there’s still much wildlife to see along the 3.5-mile Wildlife Drive, including heron, osprey, mink, fox, deer and coyote.

Close to Seneca Falls, overlooking Seneca Lake, is Rose Hill Mansion in Geneva. Built in 1839, this national historic landmark is a perfect rendition of Greek Revival architecture. With 21 rooms open to the public, the mansion gives a rare glimpse at the lifestyles of the wealthy in 19th-century America. Next door is the Billsboro Winery’s tasting room.

Also in Geneva is Seneca Lake State Park, which has a beach (open only on weekends), a water-spray playground with 100 water jets and a 2.5-mile (one-way) paved lakefront path. At the southern end of the path is the Geneva jetty. Among the rocks, we spotted a family of minks living off the ample fish supply.

West of Geneva is Canandaigua. Originally a Seneca village of 23 longhouses, it was destroyed by the Sullivan expedition on September 10, 1779. The settlement’s name means the Chosen Place. It is home to shops, museums, historic buildings, and Sonnenberg Gardens and Mansion State Historic Park, built in 1887. Sonnenberg, German for “Sunny Hill,” is a 50-acre estate built to reflect the grandeur of the European nobility’s country estates. 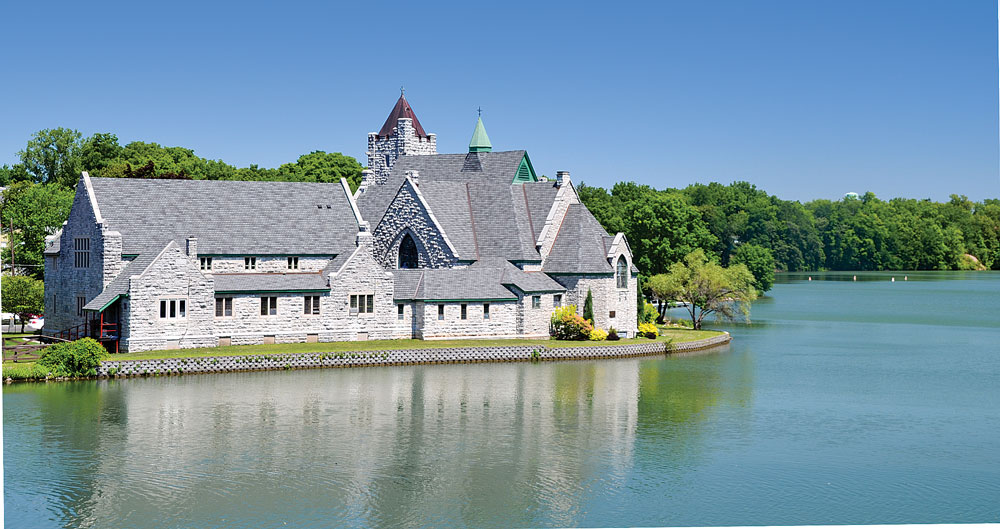 Trinity Episcopal Church sits like a fortress on the shores of Van Cleef Lake in Seneca Falls. Originally built in 1834, the current structure was completed in 1886.

Although Lake Ontario is not a Finger Lake, it is in the Finger Lakes region and worth a visit. At 193 miles long and 53 miles wide, Ontario is the smallest of the Great Lakes, with a mere 7,340 square miles of surface area. Numerous state parks dot the shoreline, but most dramatic is Chimney Bluffs in Walcott.

Day-use services at Chimney Bluffs include picnic areas, restrooms and nature trails along the rim of the towering earthen spires that rise along the shoreline. Great views can be had even without hiking the trail. There’s an impressive contrast of the spires against the immensity of the lake, which seems more like an ocean. Nearby are Sodus Point Beach Park and the Sodus Bay lighthouses — one overlooks the bay from a hilltop, and the other is at the end of a jetty.

Leaving Sodus Bay on our last day, we headed back to our campsite filled with awe and reminisced about all of the spectacular sights. The allure of the Finger Lakes region already has us planning our next trip.

West-central New York is home to 11 Finger Lakes carved by massive glaciers and ancient rivers. The last glacier retreated 10,000 years ago, leaving debris that stopped the rivers’ southward flow. As they filled and the water flowed north, side streams remained, eventually forming waterfalls and gorges. The region covers 9,000 square miles that Native Americans revere as sacred.

PUT YOUR FINGER ON IT

Stay and Play in the Finger Lakes

There’s no shortage of campsites in west-central New York, from state parks to full-scale RV resorts. Here’s a sample. 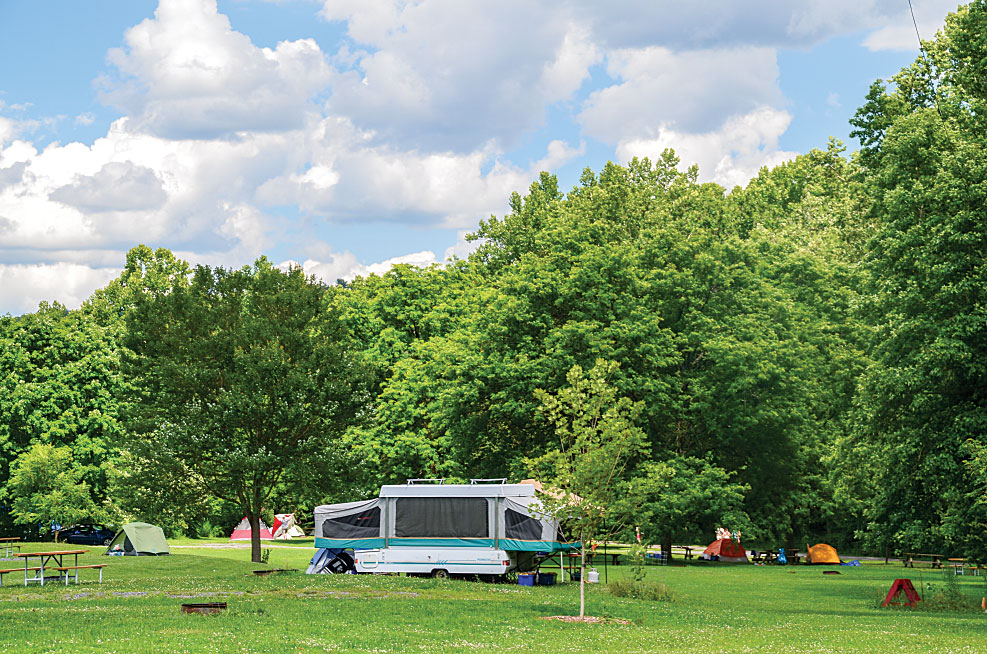 Popping up in a sea of green, a folding camper at Robert H. Treman State Park is surrounded by picnic tables, restrooms with showers, and hiking trails that lead to numerous waterfalls.

Can you name the 11 Finger Lakes?
From east to west, they are Otisco, Skaneateles, Owasco, Cayuga, Seneca, Keuka, Canandaigua, Honeoye, Canadice, Hemlock and Conesus.