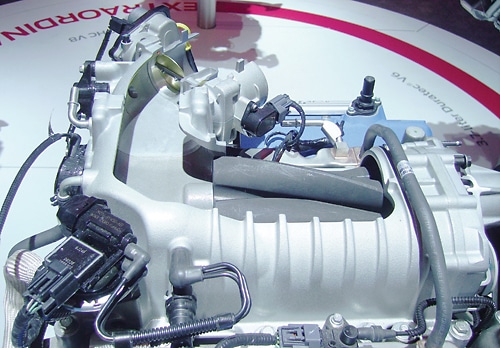 As you read this, scientists and engineers are working on the future generations of powerplants that will drive our

vehicles in the coming decades. Eventually, we’ll all probably be required to move about in driverless transportation modules powered by electricity from hydrogen fuel cells, induction or batteries. But in the near term, to paraphrase Mark Twain, the news of the death of internal-combustion engines has been greatly exaggerated.

The four-stroke gasoline engine designed by Nikolaus Otto, and the oil-burning engines named after inventor Rudolph Diesel, continue to offer benefits that often outweigh other competing systems. And with a bit of modern technology thrown in, they’ll be with us for quite a few more years. Mileage-boosting technologies such as direct injection for gasoline engines, plus cylinder deactivation, turbochargers, superchargers, special fuels, particulate filters and selective catalytic reduction for diesels have extended the useful lives of these designs.

The overall solution won’t come from one magic bullet, but rather from a wide variety of technologies. A study by the National Academy of Sciences (NAS) determined that fuel economy in America could be improved in the near term by switching to more diesel and hybrid powertrains, but their cost may cause gasoline engines to continue to be popular through 2025.

Gasoline Engines
According to the NAS, it costs about $75 for every 1-percent gain in efficiency from a gasoline engine. Simple stop/ start systems add $670-$1,100 per vehicle, but promise only about a 4-percent fuel-economy gain. Gasoline direct injection adds $230-$480 per engine, while a turbocharger adds up to $1,000. Combined, those two items can raise fuel mileage 8-10 percent. Variable valve modulation can boost gas-engine economy 1 to 11 percent at a cost of $52 to $760 per engine.

If every known practical fuel-economy tweak — from more-efficient engines and transmissions to lighter weight and friction reduction — are combined, the study concluded that manufacturers could improve mileage of gasoline-powered midsize or large vehicles by almost 30 percent for a cost of about $2,160 per vehicle at today’s prices.

Diesels
As trailerists know, diesel engines are about 30-plus percent more fuel efficient than gas engines, but at a high initial price. And with current fuel prices, many buyers don’t want to pay for the added cost of diesel technology. More efficient diesels are expected to become available between 2011 and 2014.

According to the NAS, with technology already available, automakers could increase diesel fuel economy another 13 percent. Using the latest upcoming technology would cost about $5,900 per vehicle and improve efficiency 37.5 percent. Research is under way to reduce internal friction and waste heat and add variable valve timing. A number of companies, including Gale Banks Engineering, are working on extremely high injection pressures and special injectors, along with heating the fuel to get more complete atomization and combustion. Diesels are already running successfully on alternative fuels such as natural gas and LP-gas, and we can expect them to be around for quite a while thanks to improving technology.

Hybrids
Hybrids have the advantage of being able to recover energy during braking and downhill descents, which makes them more efficient, but their smaller engines are not well-suited to heavy towing. Currently about 2 percent of U.S. vehicle sales are hybrids. The NAS predicts that full hybrids won’t be a significant fraction of the light-duty vehicle market in the next 15 years.

Limited range has always been a challenge for battery-powered vehicles, and it is especially a problem when towing, which rules out electrics for heavy trailers and long distances, unless a major breakthrough in battery technology occurs. Charging time, the ease of finding recharging facilities, the number of recharges possible before batteries need replacement and replacement cost are also major hurdles.

CAFE & Alternative Fuels
Corporate average fuel economy (CAFE) for U.S. light vehicles could hit 43 mpg by 2035. A report by the Energy Information Administration (EIA) suggests that fuel prices could increase demand for alternatively powered cars and trucks, such as flex-fuel vehicles (FFVs) and plug-in hybrid electric vehicles (PHEVs), to nearly 50 percent of sales in 25 years. FFVs may account for more than 40 percent of alternatively powered vehicles sold by then and 20 percent of all cars and trucks made. According to Wards data, 10.2 percent of all 2009 model-year light vehicles produced included a flex-fuel engine, up from 6.9 percent in 2008.

Let’s take a look at what some manufacturers are doing to increase power and efficiency of these engines that were invented well over a century ago.

Ford
Ford Motor Company recently introduced a new Power Stroke V-8 diesel with the exhaust coming out at the center of the V, which is a significant efficiency breakthrough. Ford has also been a large producer of FFVs. Ford just introduced its EcoBoost engines, which are the cornerstone of Ford’s near-term strategy. EcoBoost combines direct fuel injection, variable cam timing and turbocharging to reduce fuel consumption, emissions and weight, and deliver performance equivalent to larger-displacement engines.

Ford claims it has competitive trailer-towing performance compared to diesel engines. By 2013 Ford expects to be producing approximately 1.5 million EcoBoost engines globally. Ford currently offers EcoBoost technology on the Ford F-150, Edge, Taurus and Flex, plus the Lincoln MKS and MKT, and has announced future availability on the Ford Explorer.

General Motors is developing homogeneous charge compression ignition (HCCI) engine technology, which combines some of the advantages of both gasoline and diesel engines. HCCI employs spark ignition during certain driving conditions and compression ignition (like a diesel) during others. HCCI reduces waste heat and is expected to improve mileage about 15 percent over conventional gas engines.

Currently the 2.0-liter Ecotec is General Motors’ only direct-injected (DI) turbocharged gasoline engine, but more are expected. GM also announced plans for 18 models with DI gas engines, including the GMC Terrain CUV. Other GM models with DI include the 2010 Buick LaCrosse, Cadillac SRX, Chevy Equinox and Camaro. There’s also a new V-6 Duramax engine designed for the 1500 series pickups that may go into production.

Chrysler
Chrysler, which is now controlled by Fiat, has received Fiat’s Fully Integrated Robitized Engine (FIRE) featuring MultiAir technology. FIRE features four valves per cylinder with Fully Variable Valve Actuation (FVVA), also known as MultiAir, which allows full control of valve lift and timing. MultiAir is said to boost horsepower up to 10 percent, increase low-end torque 15 percent and reduce fuel consumption and emissions up to 10 percent, compared to similar engines. A turbocharged version of the engine is also planned that may improve mileage up to 25 percent.

MultiAir uses electro-hydraulic variable valve actuators filled with motor oil (from the sump) between the camshaft and each valve. A solenoid valve is energized once every camshaft rotation, regulating the amount of oil that goes to the actuator. Valve opening depends on the quantity of oil going to the actuator, varying from full lift to none at all. Each solenoid can also delay or advance valve opening for best performance at various rpm.

Fiat’s 1.4-liter FIRE with MultiAir is the world’s first production engine with this technology. Chrysler’s new four-cylinder World Gas Engines and Pentastar DOHV V-6 used in the Grand Cherokee (with variable valve timing on both intake and exhaust valves) now have it. MultiAir can be used in other types of engines, including V-8s and diesels; expect to see it in more applications.

Nissan claims to have developed the most fuel-efficient gasoline engine in the world, with its new three-cylinder 1.2-liter, direct-injected supercharged engine. Nissan employed the Miller Cycle, in which the power stroke is enhanced by the compression stroke by delaying closing the intake valves, so that heat energy is converted to kinetic energy more efficiently than with a conventional four-stroke engine.

The supercharger only operates under heavy loads. Using 13:1 compression, the air-fuel mixture is burned more efficiently and combustion-chamber temperatures are controlled by a piston-cooling channel and sodium-filled valves. Friction is reduced up to 30 percent by using piston rings coated with a diamond-like carbon coating, along with a variable displacement oil pump. If this engine is successful we can expect to see larger versions.

Cummins
Biodiesel fuels promise to reduce our dependence on imported oil. Testing found that diesel engines using a blend of biodiesel and ordinary diesel fuel dramatically reduce particulate emissions (soot), but the engines can emit up to 40 percent more harmful oxides of nitrogen (NOx). Researchers from Cummins and Purdue University using a Dodge Ram powered by a 6.7-liter Cummins diesel have developed a closed-loop control system that keeps diesels from emitting more smog-causing NOx when running on biodiesel.

The researchers also developed a closed-loop control system that determines fuel blend. The system identifies changes in fuel and adjusts injection timing, air-fuel ratio and EGR rates. Biodiesel has 10-12 percent lower energy density than regular diesel fuel, so mileage is lower for biodiesel. Researchers improved combustion efficiency and were able to get better mileage than before, while reducing NOx to conventional diesel levels and maintaining reductions in particulate emissions over ordinary diesel fuel. While researchers focused on soy-based fuels, the approach can also be used for other types of fuels and engines, including advanced lean-burn gasoline engines running on ethanol blends and the method is ready for commercial use.

Transmissions
Transmission technology has progressed from single-speed transmissions to the point where six-speeds are common. More ratios are better for mileage, and seven-speed transmissions are already used by some manufacturers. Continuously variable-ratio transmissions (CVT) eliminate pauses between shifts and keep engines in their most efficient rpm ranges. With current technology they can’t handle the high torque output of larger diesels and gasoline engines, but look for breakthroughs in CVTs and more ratios in conventional transmission.

Future Technologies
In the future we can expect an increasing mix of alternative fuels, electric vehicles and hybrids, along with more efficient gas and diesel engines. It also seems safe to predict that most vehicles will be downsized with improved aerodynamics and made of lighter, stronger materials, with low-friction tires to optimize mile­age. The needs of the commercial-trucking industry should help keep vehicles with high tow ratings available for the foreseeable future, along with amazing improvements in efficiency.