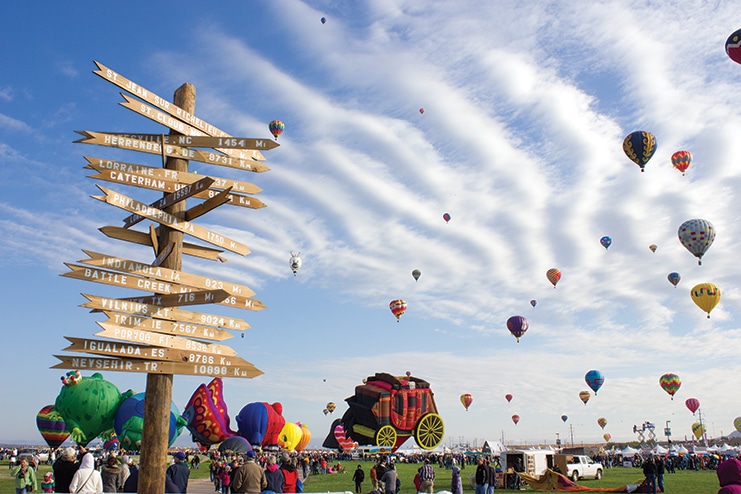 The first week of October, hundreds of colorful balloons illuminate the Albuquerque skyline as thousands of smiling, upturned faces watch

The Albuquerque International Balloon Fiesta is claimed to be the most-photographed event in the world, and for good reason. Here I am at the 2013 event, and just about everyone has a camera, phone or tablet pointing skyward, hoping to capture the magic in pixels. For me, no matter how beautiful the photos are, they are just reminders of why I must go back again. There’s nothing like being on the field at dawn when the first balloon goes up flying an American flag. The national anthem plays and activity comes to a respectful halt, while people hold their right hands over their hearts. When the Mass Ascension begins, the crowd cheers as each subsequent balloon lifts off over a two-hour period. Soon the sky is filled with more than 500 colorful hot-air balloons, including 100 special shapes. It’s always memorable when the day starts with a trio of giant bumblebees in hot pursuit of Darth Vader and Elvis Presley.

Sign posts marking the distance to cities around the world attest to the international appeal of Balloon Fiesta; 18 countries were represented in 2013.

From its humble beginnings in 1972 with 13 balloons, Balloon Fiesta has grown into the world’s premier balloon event. The massive nine-day celebration starts on the first Saturday in October at Balloon Fiesta Park. The grass launch field covers 72 acres. This city is uniquely suited to host the event due to the Albuquerque Box, a pattern of predictable winds that occur about 30 percent of the time in early October, allowing balloonists to navigate in a vertical box. Cool morning temperatures and the geography of the Rio Grande Valley cause lower winds to blow south and higher winds to blow north. By adjusting altitude, skillful pilots can make several passes and return to the launch field to land.
After the balloons took off, my husband, Jim, and I explored Main Street on the east side of Balloon Fiesta Park, a one-third-mile expanse of food, merchandise and exhibits. The Balloon Discovery Center had interactive exhibits that explained the principles of ballooning, its history and safety aspects. We admired the variety of arts and crafts for sale in the art tent. Several vendors offered Balloon Fiesta memorabilia, including pins, badges and T-shirts. Pins are especially popular, with 60,000 sold every year. Two “Trading Only” sessions allowed collectors to meet other pin enthusiasts from around the world.
Elsewhere in the park, entertainment abounded. Seven professional carvers from all over the United States and one from Zimbabwe competed in the Chainsaw Carving Invitational. They created amazing wood sculptures that were sold at auction, or raffled to benefit the Albuquerque Area Firefighters Random Acts. In the music tent, a talented group of children from Interplay, a local school of music, sang and danced their way into our hearts. Other kids expended their energy on a short zip line or the “Walk on Water” attraction (picture them inside a big inflatable ball bobbing around on a pool). Sunday morning of the first weekend, classic cars filled the field for the Fiesta of Wheels Car Show.
We returned to the field on Saturday afternoon to watch preparations for the America’s Challenge, a distance race for gas balloons. Due to a worldwide shortage of helium, all five balloons in the 2013 race were filled with hydrogen. Gas balloons can stay aloft for two to three days. After they took off and drifted northeast, we tracked their progress on a mobile app. The winning team flew 2,300 miles to land in Ontario, Canada, more than 60 hours later.

Balloon Fiesta launch directors, also known as Zebras, handle crowd control and work with the pilots to ensure safety during the launch.

On five of the nine evenings, balloons were tethered and inflated just before dusk for the popular Balloon Glows. As we walked amongst the balloons, the Balloonmeister counted down to ignition. When the “all glow” command was issued, pilots fired their burners. These evenings culminated with spectacular fireworks shows.
It’s no wonder that 800,000 people attend the fiesta each year. The best way to avoid traffic jams caused by that many people is to stay in the RV parks near the field. If you are lucky enough to own an Airstream, you can get a VIP dry camping site adjacent to the launch field. In 2006, Ken Johansen organized the first Airstream Rally at the Albuquerque Balloon Fiesta, with 20 attending. In recent years, the rally has grown to 200 sites. Registration opens to Wally Byam Caravan Club International (WBCCI) members on January 15, and opens to all other Airstream owners on February 15 (sorry, no SOBs — Some Other Brands — allowed). Email Johansen to register (see page 25). The rally, which runs from Friday to Tuesday the first weekend in October, fills up quickly.
In this crowd of die-hard Airstream fans, one man stood out. Fred Coldwell has been the historian for the vintage club for 10 years. Not only could he answer just about any question about trailers built before 1969, he told me (admittedly an Airstream novice) about the history of WBCCI. Wally Byam, who founded Airstream in 1931, led some famous caravans, including a nine-month, 18,000-mile journey from Capetown to Cairo in 1958. Byam’s spirit of adventure lives on today with caravans exploring every corner of North America. Two such groups traveled together to the Albuquerque Balloon Fiesta as part of longer excursions.
Not only do Airstream owners get parking that lets them be on the launch field less than 15 minutes after getting out of bed, at least one lucky woman got a bird’s-eye view of the festivities. When a volunteer coordinator came to our Friday night gathering asking for chase crew volunteers, Cathy and Byron Wright raised their hands. The Wrights, who live full time in their Airstream, were attending the Balloon Fiesta for their second time. After a brief orientation, they spent the next four mornings helping to take the basket out of the truck, unfolding the balloon and operating the fan. Shortly before liftoff on Saturday, Paul Heiken, a balloonist from Oregon, invited Cathy to ride with him. While the rest of the chase crew followed in a pickup, she floated 1,400 feet above the city. Back on solid land, Paul conducted Cathy’s “First Flight Ceremony” with a champagne toast. Her excitement convinced me to volunteer for a chase crew for the upcoming 2014 Balloon Fiesta.

Around 100 special-shaped balloons were at the 2013 Balloon Fiesta.

One of the more unique vantage points to view the balloons and escape the crowds is from the Rio Grande River via kayak. Kelly Gossett, owner of New Mexico Kayak Instruction, leads guided tours every morning during Balloon Fiesta. The gentle winds of the Albuquerque Box usually carry the balloons directly over the river. Dave Millican, a tour guest, saw two groups of 30 to 50 balloons as the kayakers neared Balloon Fiesta Park. “The balloons were illuminated in the cloudless sky by the rising sun,” Millican said. “The quiet was only disturbed by our paddles, the sound of the balloon burners and the conversation of the pilots and crew. It was a beautiful way to explore the Rio Grande and enjoy the fall colors in the Bosque (the cottonwood forest along the river).”
The Bosque is also a popular place for biking. The Paseo del Bosque Trail, a paved 16-mile multiuse trail, runs along the east side of the Rio Grande. Some folks from the Airstream Rally biked for several hours one afternoon while admiring the views and wildlife native to the area. In the early mornings, many people ride to Balloon Fiesta on this trail and leave their bikes at the free Bike Valet, which is staffed by local bicycle group volunteers.
The Anderson Abruzzo International Balloon Museum is just south of Balloon Fiesta Park. We enjoyed learning about the history of ballooning, starting with the first flight in 1783, and the role it has played in adventure, scientific experiments, warfare and the exploration of space. The museum is named in honor of two New Mexico balloonists, Maxie Anderson and Ben Abruzzo, who were part of the first helium balloon crews to successfully cross the Atlantic Ocean in the Double Eagle II in 1978 and the Pacific Ocean in the Double Eagle V in 1981. Gondolas from both crossings and equipment from other historic flights are displayed. Interactive exhibits educate and entertain adults and children alike.
We tore ourselves away from the fiesta long enough to visit three of Albuquerque’s many popular attractions. Tim’s Place — “the world’s friendliest restaurant” — is a must-do for breakfast or lunch. While the food is very good, it’s the owner himself who inspires. Tim Harris is believed to be the only person with Down’s Syndrome to own a restaurant. Six days a week he welcomes people at the door with a handshake or a hug. “Free hugs, available upon request” are on the menu. The Hug Meter on the wall has recorded more than 42,000 hugs. He is so happy to come to work that Harris does a “dance off” in the parking lot. From an early age, his parents encouraged him to be independent and successful. When he was in high school, Harris was voted Homecoming King and Student of the Year. He graduated from college, and then spent two winters living aboard a sailboat and exploring the Bahamas with his parents. As an athlete, he’s earned more medals in the Special Olympics than Michael Phelps earned in the Olympics. His life story has been covered by People magazine, NBC, ABC, CBS and NPR, just to name a few. In his spare time, he is a motivational speaker.
After we were fed and hugged, we went to the National Museum of Nuclear Science and History, the nation’s only congressionally chartered museum in its field. It tells the story of the Atomic Age, from its pioneers in early research through today’s peaceful uses of technology. Science fans will appreciate the periodic table of elements engraved on the lobby’s marble floor. In Little Albert’s Lab, interactive exhibits and a robotic puppet of Albert Einstein capture the attention and imagination of younger visitors. The 5-acre outdoor Heritage Park behind the museum contains bombers, jets, rockets and missiles.
Beer lovers — that includes me and my husband — were delighted to discover that the New Mexico Brew Fest and Music Showcase coincides with Balloon Fiesta. It is held in Villa Hispana at Expo New Mexico, the state fairgrounds, from 1 to 6 p.m. on the first Saturday in October. More than 20 New Mexico and eight out-of-state breweries offered tastes of their beers last year. Whole Foods and several other food vendors, including one operating out of a cute Airstream, kept the masses well fed. Three bands played rock and reggae on the main stage, and an 11-piece German oompah band gave the gathering an Oktoberfest feel on a shaded patio.
If Balloon Fiesta is on your bucket list, there’s no time like the present — 2014’s event is scheduled for October 4 to 12. You’ll soon discover that once is not enough.

Mary and Jim Zalmanek enjoy traveling in their 2003 Safari Trek when not at home in Monument, Colorado. They attended the Airstream Rally in a 1975 31-foot Sovereign as guests of Roger Mosley and Marty Brodzik.
American SouthwestMary ZalmanekTrailer Travel Destinations