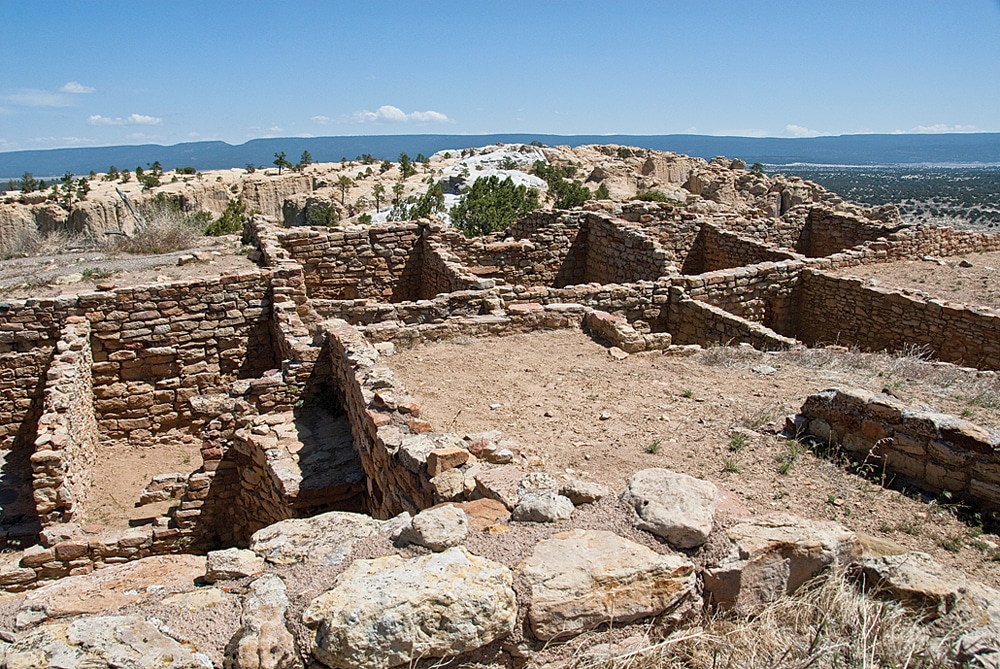 El Malpais may mean “the badlands” in Spanish, but there’s nothing ugly about the place. In fact, it is a little-known treasure in New Mexico. Pronounced El Malpais (mal-pie-EES), the national monument was established in 1987 and preserves 114,277 acres. The monument is a stark, but phenomenally beautiful mix of volcanic features such as lava flows, pressure ridges, complex lava tube systems and cinder cones, with sandstone bluffs and mesa tops bordering the eastern side of the structure. People have traveled through and lived in this rugged region for more than 10,000 years, so as we moseyed along the 7.5-mile-long Zuni-Acoma Trail searching for treasures like wildflowers and snakes, we found pottery shards (and left them where we found them), something we don’t often see as we explore the trails of our national parks and monuments.

The Puebloan peoples of Acoma, Laguna, Zuni and the Ramah Navajo all traveled the same paths we traveled. Today, these same tribes continue to gather herbs and medicine here, and they still pay respect to the landscape and renew ties with it. The Zuni-Acoma Trail is one of many ancient routes connecting the pueblos of Zuni and Acoma. Hike it and you’ll see lava bridges made by hand. Amazingly, the pottery remnants we found date from as early as 850-900 A.D., with most dating between 1050-1150 A.D. The Ancestral Puebloans lived along the edges of the lava flows, but found refuge in the lava tube caves when it was hot in summer and when the cold winds blew in winter. They also melted ice from the caves and stored the water in pottery jars, caching for later use.

During our hike along the Zuni-Acoma we were thrilled to know we were also hiking part of the 3,100-mile-long Continental Divide Trail, as well as following the path of the 1776 Dominguez-Escalante expedition.

We also found the three-mile-plus trail to the Narrows superb. The trail follows above a narrow corridor formed when lava flowed close to the base of the sandstone mesa. Much of the lava we saw that day was from the McCarty’s crater, at 3,000 years, the youngest flow in the area. We meandered along the route, capturing the beauty of claret-cup cacti along the way. We slowly gained elevation as we climbed to the top of the 500-foot sandstone mesa where we hiked among ponderosa pines and ate lunch with a fantastic view of the La Ventana Arch. If you would rather not hike so far, you can get a much closer view of the arch by parking and hiking an easy trail to near the base of the arch.

In the southeast portion of the park we found two highlights. The Lava Falls Area, marked with cairns, was a fun place to explore. An interpretive booklet served as a fantastic way to learn more about the lava. Late one afternoon we drove to the Dittert Site, located south of the monument in the El Malpais National Conservation Area and Cebolla Wilderness. We followed a dirt two-track more than a mile to a gate. From there we walked to the ruins, probably built and occupied by the Ancient Puebloans between 1000 and 1300 A.D. Visible from the trailhead, look to the northeast at a 45-degree angle and you’ll see the ruins about a half mile out.

One day we explored the El Calderon Area, located at the north end of El Malpais, just off NM 53. A three-mile loop trail led past Junction Cave, Double Sinks, Bat Cave and El Calderon cinder cone. Bat Cave is the home of Mexican free-tailed bats in summer. Little brown bats, pallid bats and Townsend’s big-eared bats live in the monument year-round and hibernate in this cave and other caves throughout the region. There are plenty of caves in El Malpais, but currently all caves are off limits to visitors to protect the bats who live in them from white-nose syndrome. Although the U.S. Fish and Wildlife Service believes the fungus that causes white-nose syndrome is spread from bat to bat, there is a strong possibility that the disease is transferred by humans carrying the fungus on their clothing and caving gear.

We found plenty to do in our days at El Malpais, and could have stayed even longer. The Joe Skeen BLM Campground is located a couple miles south of the El Malpais BLM Ranger Station. Sites are available on a first-come, first-served basis. Sheltered picnic tables, vault toilets, fire pits, grills and sites large enough for most RVs are offered. Pets are allowed, but they must be under control. Mountain bikes are allowed on any of the designated roads, but they are not allowed on trails and in the wilderness areas.

El Malpais is one of the many incredible places to visit in the Land of Enchantment, but we found a few more hot spots in the Grants area that can make an RVing trip to this region of New Mexico worth a significant stay. West of El Malpais is El Morro National Monument. Though it’s a small national monument, it’s a must-see. Named for the huge headland or bluff, the place is big on views, sandstone cliffs and historical significance. The monument was designated in 1906 to protect the inscriptions found there. Weary travelers thought the world of El Morro, a massive sandstone bluff and welcome landmark, because there was, and still is, a reliable waterhole at the base of the bluff near the road. Also called Inscription Rock, it is a popular campsite as well.

Ancient Puebloans lived on top of the mesa and were the first to carve on the rock, leaving petroglyphs of sheep and other creatures. For more than 300 years, Spanish explorers and American soldiers, inscribed their signatures, dates and messages on the rock. Today the monument protects more than 2,000 inscriptions and petroglyphs.

When you visit El Morro you’ll have to explore between 9 a.m. and 5 p.m. when the preserve is open (hours vary by season). Hours are extended in summer, but you have to be off the trail by closing time. It’s the only means of protecting the inscriptions. There is a trail fee of $3 per adult, which is good for seven days. Passes can be purchased at the visitor center. In addition to selling books and other items, there is a free video that will orient you to the park.

Before you begin your hike be sure to pick up the necessary literature for the self-guided trail. The Inscription Trail should make your to-do list. Not only will you hike to the desert pool, you’ll see hundreds of Spanish and Anglo inscriptions, as well as prehistoric petroglyphs.

If you have the time and energy, hike the entire loop, including the Mesa Top Trail. (The two-mile loop includes Inscription Trail.) It’s only 200 feet to the top and well worth the effort for the views. You’ll see the Zuni Mountains, El Morro Valley and the volcanoes of the El Malpais area. You’ll also see the Ancestral Puebloan ruin, Atsinna, or “place of writing on rock,” as well. Atsinna was occupied from about 1275 to 1350 A.D. when about 1,500 people lived in the 875-room pueblo.

A nine-site primitive campground is available on a first-come, first-served basis. Free in the winter when the water is turned off, it’s $5 a night in summer. Fires are permitted in provided grills, though when we visited there was a fire ban and fires were not permitted.

If you prefer hookups, check out the Ancient Way Café and Outpost, one mile east of the monument. It offers water, electric and sewer in addition to wireless Internet; showers; and delicious American, New Mexican, and vegetarian food (including scrumptious pies). Open year-round, call 505-783-4612 or check out www.elmorro-nm.com.

Unbelievably, even when it’s hot outside the cave temperature never gets above 31 degrees Fahrenheit. The floor of the ice cave is about 20 feet thick. The deepest ice is the oldest and dates back 3,400 years. There’s an admission fee for hiking the trails.

Wild Spirit Wolf Sanctuary is located southwest of El Morro, N.M. Paved BIA 125 leads south from NM 53 and then you’ll have to drive dusty, dirt road BIA 120 to the sanctuary. There’s no room for RVs to park in front, but there is a campground. Guided tours are available from Tuesday through Sunday at 11 a.m., 12:30 p.m., 2 p.m. and 3:30 p.m. Adults are $7, seniors $6, and the tours last more than an hour. We learned all about wolves and wolf dogs and were fortunate to be there when the animals began howling. Call 505-775-3304 or check out www.wildspiritwolfsanctuary.org for more information.

Named for the lava flows that cover much of the monument, El Malpais is a place where the hiking can be as hard as the lava beneath your boots. We have hiked across lava in the past so we know to use hiking poles and common sense. When hiking the boot-shredding lava rock, cairns (conical piles of rocks stacked to mark pathways), not trails, lead the way. When crossing lava it’s best to travel from one rock cairn to the next. Stop at each cairn and do not continue until you can locate the next cairn. The Malpais may be beautiful but they can be dangerous. Visitors have gotten lost on the lava for days and longer … Hike with care!