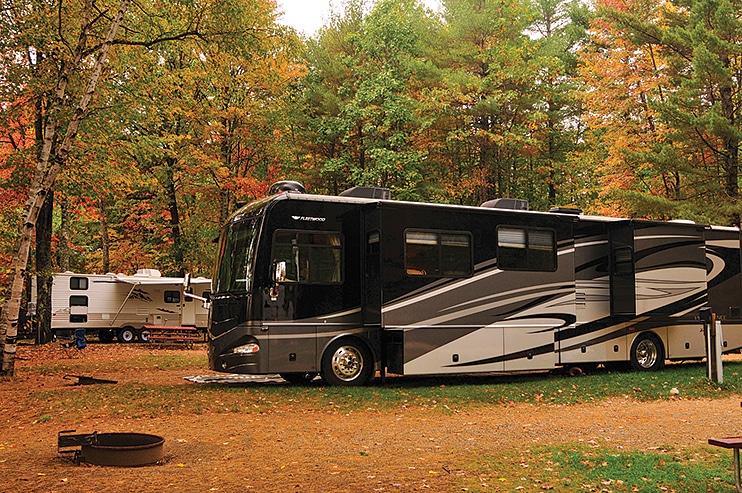 A common loon, startled by the sudden appearance of our pontoon boat as we enter a secluded cove, dives beneath the sparkling waters of Big Squam Lake. It resurfaces a mere 20 yards away, unconcerned by our presence.
“Squam Lake, like a clock, stopped ticking 100 years ago,” the captain says, deftly piloting the vessel along the shoreline that’s fringed with sleepy cottages and trees displaying their splashy autumnal colors.
It’s easy to see what he means. The pristine 7-mile-long lake, best known as the stand-in for Golden Pond in the epic movie starring Henry Fonda and Katharine Hepburn, appears much as it did when On Golden Pond premiered in 1981. It’s the largest of the three lakes known as the Squam Lakes — Big Squam, Little Squam and White Oak Pond. There’s limited public boat access — ask a local where to find it — so boat traffic is light, leaving the lake a haven for nesting bald eagles and loons as well as summer residents.
“Over there is where they filmed the scene where the boat hits the rocks,” the captain points out, noting that the vintage 1951 mahogany Chris-Craft was so soundly built that the film crew had to modify it to make it sink. We cruise past many of the set locations used in the movie including the cottage “owned” by Norman and Ethyl Thayer, the lead characters, as well as places like Chocorua Island, site of the first boys’ resident summer camp in the country.

Danforth Bay Camping & RV Resort offers sites for all size rigs and is open year-round in the scenic Lakes Region of New Hampshire.

I booked my narrated Explore Squam cruise through the Squam Lakes Natural Science Center in Holderness, which has ample room to park RVs. It’s a quick walk from there to the dock adjacent to Walter’s Basin Restaurant, named for the elusive trout sought by Norman in the movie, the departure point for all of the science center’s cruises.
You can purchase a combination ticket for a lake cruise and trail pass for the center, which has a series of nature trails that loop through woods and wetlands. Everyone’s favorite, the Gephart Exhibit Trail, meanders past trailside enclosures of black bears, raptors, white-tailed deer and other native wildlife. Throughout the day, you’ll also have a chance to meet these residents up close at hourly amphitheater shows.
My introduction to New Hampshire’s scenic Lakes Region came earlier in the day when I  stumbled upon Canterbury Shaker Village in the southern reaches of the area. This once-thriving Shaker settlement offers an intriguing glimpse into a long-ago lifestyle of a religious group that was both self-sufficient and celibate. The latter was a primary reason that the order dwindled down to three members, all now living in Maine.
“The Shakers were looking for heaven on earth,” interpreter Cathy Currier explains as I enter the Dwelling House, which was built by the Shakers in 1793 and included sleeping rooms, a dining area and common rooms.
“They believed that God gave them the gift of time,” Currier says, “and that work was doing God’s work. Each person had only one job, so it’s not surprising that they became great inventors. The Shakers invented the first washing machine here.”
The Dwelling House is the largest of the village’s 25 historic buildings, each with a specific purpose as I discover as I wander through the laundry, infirmary, syrup shop and other buildings on the 694-acre property. The village is a marvel of ingenuity, preserving the 200-year legacy of the Canterbury Shakers.
On this fall foliage jaunt I drive through traditional whitewashed New England villages and forests swathed in harvest colors and past farm stands laden with bright-orange pumpkins, ruby-red apples and colorful mums. I travel past a handful of the region’s more than 270 lakes and ponds, many with RV campgrounds situated on or near their scenic shores. Fall foliage season, which generally lasts from late September through mid-October in this central region of New Hampshire, comes at the tail end of many campgrounds’ operating seasons. So be sure to check closing dates and book early to avoid disappointment as sites fill up quickly during this period.

Pumpkins line the walkways in front of the Moulton-borough United Methodist Church.

Bear’s Pine Woods Campground’s season extends into the end of October, making it a good choice for leaf peepers. It’s located in Moultonborough near Lake Winnipesaukee, the Granite State’s largest lake with 283 miles of shoreline. Danforth Bay Camping & RV Resort on the shores of Ossipee Lake is open year-round and has 300 large sites and a half-mile of lake frontage.
U.S. Route 3 takes me to Meredith, which collectors of the world-famous Annalee dolls know as the hometown of Barbara Annalee Davis, who created the first dolls in the 1930s. The outlet store on State Route 104 stocks timeless treasures as well as the latest in the product line, which has expanded to include mice, ornaments and numerous other items. It also has several museumlike displays chronicling the history of the company and the evolution of its products.
Meredith’s newest attraction is the American Police Motorcycle Museum. It features three dozen motorcycles including an authentic police motorcycle from each decade, among them the restored 1976 motorcycle that led the police motorcade for Elvis Presley’s funeral. A 1941 Indian motorcycle designed for military use during World War II is on display, as are an assortment of police radios, police-related children’s toys and other memorabilia. You also can view photos, newsreel clips and historic instructional films on how to ride a motorcycle.
Continuing to Moultonborough, I detour on New Hamp–shire Route 171 to Castle in the Clouds, a mountaintop estate built in 1913-1914 for wealthy shoe manufacturer Thomas Plant and his wife Olive.
The main entrance road snakes up the mountain with pull-offs for short walks to waterfalls and sweeping vistas. While easily navigable by car, with an RV your best option is to take Ossipee Park Road instead. Look for the sign for the Castle Springs water bottling plant and follow this road to the main parking area.
From the Carriage House, catch the trolley to tour the 1914 Arts and Crafts-style mansion. Plant designed the home himself and hired more than 1,000 Italian stonemasons to hand-carve blocks of granite from the surrounding mountains for the exterior walls, a project that took more than two years. The house had many innovative features for its time, including a brine-cooled inside ice box, central vacuum system and clothes-drying chamber.
Once back on NH Route 171, I travel through the town of Ossipee, before jumping on NH Route 28 to Wolfeboro. An alternate route, State Highway 109, parallels Lake Winnipesaukee and goes through Melvin Village, a hamlet of Tuftonboro, and home to Melvin Village Texaco where restored vintage vehicles including a Texaco tanker and Yellow Checker Cab evoke memories for many of a simpler time.
Wolfeboro is considered to be the oldest summer resort in the country. It was here that the nephew of then-Governor John Wentworth built Kingswood by Lake Wentworth in 1770 — five years before the American Revolutionary War.
I spend several hours at the Wright Museum in Wolfeboro, which celebrates the people and events of the World War II years. Interconnected galleries, each dedicated to a different year from 1939-1945, are filled with items representative of wartime America on the front and at home including apparel, advertisement signs and archival photos. There’s also an impressive collection of authentic military equipment and vehicles including a 42-ton Pershing tank and World War II Scout Car.
The New Hampshire Boat Museum, just down the road, showcases antique and classic boats of all types and models along with photos, race trophies and other memorabilia related to Lake Winnipesaukee. I also stopped at Hampshire Pewter in Wolfeboro for the free guided tour to learn about the production process and observe the centuries-old method of hand-casting fine pewter.
The following morning I was off to Weirs Beach in Laconia. For decades it’s been a popular summer playground on Lake Winnipesaukee with its public beach, arcade, eateries, wooden boardwalk and Kellerhaus. The latter features homemade candies, including hand-made ribbon candy, and its famous ice cream buffet, all made from the original recipes developed by Otto Keller who launched the business in 1906.
It’s also the home port of the 230-foot historic M/S Mount Washington that cruises to five different ports of call, including Wolfeboro and Alton Bay, depending on the day of the week. The M/V Sophie C, the oldest floating post office in the country, makes two mail runs daily (except Sundays) departing from Weirs Beach. Passengers are welcome on the two-hour trip to deliver mail to some of the islands.
The Winnipesaukee Scenic Railroad departs from Weirs Beach as well as Meredith for one-hour and two-hour round-trips along Lake Winnipesaukee’s shores. As I board the train, I promise myself that I will return again to experience the beauty and attractions of the Lakes Region in all its seasons.

Bear’s Pine Woods Campground
This campground is on the access road to Lake Winnipesaukee and is surrounded by a 350-acre wildlife preserve. RV sites, electric, water, laundry, volleyball, bocce, horseshoes and pool. There’s even a 37-foot RV rental unit if you can’t bring your own!
603-253 6251 | www.bearspinewoods-campground.com