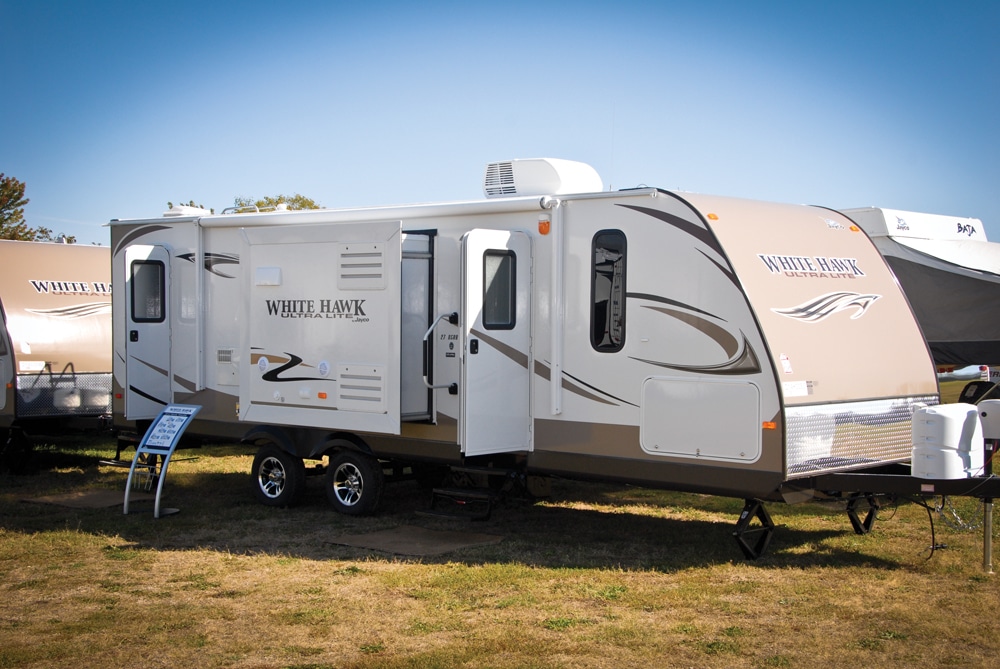 The towables market has been ever-expanding since the recent recession and is currently the fastest growing segment in the RV market. This ongoing trend is redefining the market as we know it. Recreation-minded consumers seem eager to spend on affordable RVs that are packed with value and they want something that offers fuel efficiency. In other words, lighter-weight trailers and fifth-wheels are a big part of that new market. However, at the other end of the spectrum, larger fifth-wheels are also gaining in popularity. Retirees or people considering retirement don’t seem so concerned about the cost of a unit. Luxury toy haulers that have become more residential with larger refrigerators and more comfortable furniture are particularly hot in the market right now.

In the lightweight category, Coachmen is focusing on the heart of the market with its new, entry-level Apex travel trailer line that comes in lengths from 20 to 28 feet with base prices starting at $15,000. The company swapped out lauan substrate for Azdel Superlite — 50 percent lighter than wood — in its new laminated fiberglass sidewalls.

Keystone’s high-end Raptor and Fusion fifth-wheel and travel trailer series are the company’s top-selling toy haulers, with retail prices starting at $38,149 and $43,600, respectively. It seems toy haulers as a whole are starting to appeal to women who often make the purchase decisions and want the unit to be an RV with a garage, not a garage first. Toy haulers are not as edgy as they once were. During the last year, Keystone has specifically moved that direction with its Raptor and Fusion products. In addition, the company’s high-end Montana fifth-wheel has been completely redesigned; especially notable is the fresh new interior, including one model (3900FB) with a huge front bath where the master bedroom is usually located.

Winnebago Industries, which for decades has built Class A, B and C motorhomes, climbed aboard the towable trend two years ago with the purchase of SunnyBrook RV, a highly regarded travel trailer and fifth-wheel manufacturer. In the lightweight categories, Winnebago Towables introduced two new products for 2013 — the Winnebago Lite Five fifth-wheel and the Minnie travel trailer, which borrowed its name from an iconic Winnebago mini-motorhome brand.

Three-year-old Prime Time, a subsidiary of Forest River, introduced the Avenger travel trailer for 2013 with a $15,995 MSRP. Prime Time president Jeff Rank noted that new materials and construction techniques inside the factory allow some entry-level travel trailers to cost less than pop-up campers, which is probably why folding camping trailers are the only towable segment in decline.

That trend will probably continue to cut into the folding camping trailer market according to Derald Bontrager, president of Jayco. For 2013, Jayco introduced seven laminated-fiberglass travel trailer floorplans ranging from 29 to 35 feet in the White Hawk series with a base MSRP of $24,893.

To meet the current market, Crossroads for 2013 added a lightweight 30-foot fifth-wheel with a $29,995 MSRP to its Cruiser Aire series. The two-tone double-slide unit features a dry weight of 7,000 pounds so it can be towed by half-ton pickup trucks. Crossroads uses lightweight composites and aluminum in its construction.

Founded in 2008, Evergreen Recreational Vehicles initially offered an all-composite green Ever-Lite travel trailer series retailing for about $45,000. Now the company has evolved into more traditional products that include the Bay Hill fifth-wheels with luxurious interiors and a line of Sun Valley travel trailers.

Heartland Recreational Vehicles has seen increased sales in the company’s mid-level Sundance and Elk Ridge lines, which retail in the low $40,000 range. Both have been upgraded for 2013 and now offer the same amenities, slideouts and floorplans in mid-level that were only available in high-end fifth-wheels three or four years ago. The company is also coming out with an edgier, upgraded look with its Gateway, a 35- to 38-foot line of fifth-wheels with triple and quad slides with colored glass and frameless windows, and hot new paint schemes on its Cyclone fifth-wheel toy haulers.

Last, but certainly not least, Airstream had California designer Christopher C. Deam design an ultra-modern interior for the 2013 International Sterling Edition that used bright yellow and lavender colors to accent the interior. Meanwhile, Airstream has developed a new product with its European partners. It’s all hush-hush as of press time for this issue, but we were told that it’s a travel trailer interior concept unlike anything Airstream has ever done before.

All-new Augusta
With Augusta RV’s first unit coming off the line in March of 2012, this new company now offers the aerodynamic Augusta towable line featuring a fiberglass skin and includes a couple of bunkhouse models in its 28- to 34-foot, $19,000 to $23,000 products.

Shasta RV
The 100-inch-wide mid-level Phoenix fifth-wheel will feature leather-style furniture and a “designer-inspired” bathroom. The new Phoenix will range in length from 27 to 34 feet with MSRPs starting around $30,000.

Starcraft RV
The AR One line has been expanded with three new models: a 21-, 26- and a 25-footer with bunks and a slide. A new half-ton towable fifth-wheel and five new folding camping trailer floorplans are also in the lineup.

KZ RV
The company has introduced the Durango Sandlewood Edition fifth-wheels with champagne full-body exteriors in both the mid-profile Durango 1500 and full-profile Durango. These will have black accent trim and new aerodynamic front caps, and be available in lengths of 28 to 39 feet. The highlight of its new offerings is the Sport Trek travel trailer, towable by light-duty pickups and SUVs, which will retail in the $20,000 range, come in lengths of 26 to 34 feet and feature an enclosed underbelly.