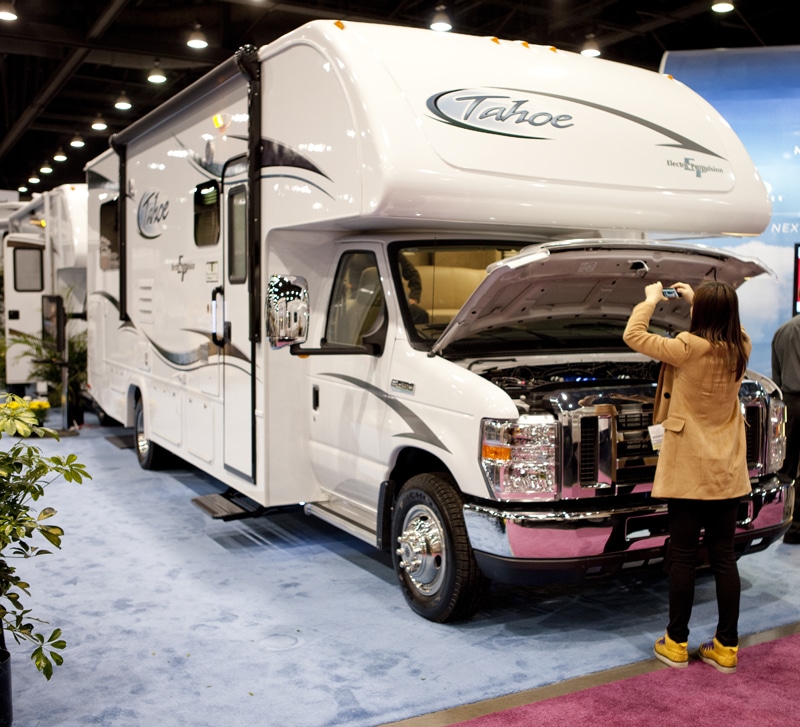 People looking to get into the RV lifestyle  with a small motorhome or others who want luxury living and as much space as possible – and pretty much anybody in between – can have their pick from the array of 2012 and 2013 motor­homes that were on display during the 49th Annual National RV Trade Show, which was held last fall in Louisville, Ky.

New from manufacturers displaying motorhomes in the sprawling Kentucky Exposition Center were diesel-pushers with supersized bathrooms and coaches with higher horsepower engines. One of which, Fleetwood RV’s American Coach Heritage, includes an Apple iPad  to control most of the motorhome’s electronic features.

The MVP RV eTahoe is the industry’s first all-electric motorhome.

Also at the show, MVP RV showed the prototype of the first all-electric Class C – the eTahoe – and said it will introduce an electric-powered Class A later this year, a prototype of which has been on the road in China for nearly a year.

Freightliner Custom Chassis Corp., the motorhome industry’s leading diesel chassis builder with headquarters in Gaffney, S.C., showcased its new SL13 platform. The tag-axle SL13 chassis has been designed as a platform for 40- to 45-foot motor­homes and is equipped with a 500-hp Detroit Diesel DD13 13-l engine. The DD13 also offers Virtual Technician, which integrates GPS technology with engine diagnostics and automatically reports problems to a Detroit Diesel call center where the issue can be analyzed and the motorhome owner advised of the action that needs to be taken.

The all new SL13 boasts a DD13 Detroit Diesel engine for motorhomes 40 to 45 feet long.

The SL13 features an optional ZF ITAG rail assembly with “passive steer” tag axles with independent suspension that allow each wheel to move up and down independent of the other.

Spartan Chassis, Charlotte, Mich., introduced two concept chassis at the Louisville Show: one is a small Class A diesel-pusher platform and the other is the company’s first Class C motorhome chassis designed for people who have restricted mobility.

Spartan’s first Class C concept platform, which can be equipped with a gas or diesel engine, involves lowering the frame and installing a “kneeling” function to provide easier access for those people with limited mobility.

Here are some of the highlights from the Louisville show:

Decatur, Ind.-based Fleetwood RV has added a fourth floorplan – the 45T – to its luxury American Coach Heritage lineup. The 45T features a bedroom slideout that extends into an expansive spa bath with heated tile floors, double solid-surface sinks and a walk-in wardrobe. The triple-slide 45-foot bath-and-a-half Heritage 45T, as are other Heritage floorplans, is equipped with an iPad that controls most of the coach’s electronic systems including lights, shades, audio-video equipment, water pump, ceiling vents and fans. The Heritage is assembled on Fleetwood’s Liberty modular chassis, which has a gvwr of 50,600 pounds, and is built by Spartan Chassis. The coach is powered by a 600-hp Cummins ISX15 engine – the heftiest engine available in the RV market. MSRP: $803,517.

Entegra Coach, Middlebury, Ind., has changed the exterior look and interior feel of its top-of-the-line 45-foot Cornerstone diesel-pusher with new exterior chrome accents and interior modifications for its 2013 model. Available in two quad-slide floorplans – including the 45RBQ bath-and-a-half with an amidships king-size bedroom – Cornerstone is assembled on a Spartan K3 tag-axle chassis and is equipped with a Cummins ISX 600-hp turbocharged engine that features an Allison 4000MH six-speed transmission and electronic shifter. The 45DLQ layout is designed with a rear king bedroom and Select Comfort air mattress. Amenities include leather furniture, raised-panel hardwood cabinets, an entertainment center with electric fireplace, a stackable washer/dryer, central vacuum system and a hidden safe. MSRP: $557,721.

Making its Louisville debut, Equine Motorcoach, Clarksville, Ind., introduced a redesigned, American-made second generation version of its Class A diesel-pusher configured to transport horses. The Equine previously had been assembled in Hungary by a company based in England. Now built in a private-label venture by Kibbi Inc., Bristol, Ind., the 44-foot Equine Motorcoach mounted on a Freightliner Cascadia truck chassis with a gvwr of 56,000 pounds is capable of transporting four horses. Two- and six-horse floorplans also are available. Base MSRP: $499,000.

On the concept front, Winnebago Industries showed a new floorplan in the Era Class B motorhome featuring a soft-sided Carefree Patio Room – intended to increase living space – that extends from the passenger side of the motorhome. The 24-foot 70A Concept Vehicle would be the second floorplan in the Mercedes-Benz Sprinter chassis-based Era lineup. Besides providing high mileage, the Era 70A is designed with enhanced interior storage space, an exterior Class A-style slideout storage tray and a bed system that can be switched between twin and double. MSRP: N/A.

Fleetwood RV has reinvented its Excursion Class A motorhome for the 2013 model year that – at 33 feet 11 inches long – is the shortest diesel-pusher in the manufacturer’s lineup. The new Excursion is mounted on Fleetwood’s Power Bridge chassis with a gvwr of 26,000 pounds and powered by a 300-hp Cummins 6.7-l ISB engine with an Allison 2100MH transmission. Excursion features solid-surface countertops, a 40-inch drop-down Sony LCD TV and walk-around queen-size bed. Sleeping capacity can be augmented by a sectional transformer couch housed in a 30-inch-deep slideout along with the dinette. The Excursion sleeps six adults with the addition of the optional queen-size Hide-A-Loft bed. MSRP: $179,465.

Forest River has introduced the Georgetown XL, an upgraded version of its popular Georgetown gas-powered motorhome series. The Georgetown XL, which is available in five floorplans with up to three slideouts, is built on the Ford F53 chassis with a gvwr of 22,000 pounds and is equipped with a 362-hp Triton V-10 engine. On the exterior, the coach has been designed with a new front cap with a large one-piece windshield and LED clearance lights. Inside, the ceiling height has been increased to 84 inches and interior features include solid-surface countertops and kitchen backsplashes, a vessel bathroom sink, porcelain toilets, a new convertible sofa system and an 80-inch bed with residential style headboard. MSRP: $115,590.

Great West Van, of St. Andrews, Manitoba, Canada, has introduced an extended version of its Class B Legend series built on the Mercedes-Benz Sprinter 3500 chassis equipped with a six-cylinder, 3.0-l turbo-charged Mercedes-Benz front-diesel engine estimated to get 20-to-22 mpg. The new 241â„2-foot Legend E provides an additional 16 inches of rear space that can be used for cargo or to install a 7-foot bed with an included extension panel and cushion designed to be stowed under an electric tri-fold sofa. The Legend E is equipped with solid wood cabinets, 5-cubic-foot three-way auto-switching refrigerator and two-burner stove. MSRP: $105,900.

The 36- to 40-foot diesel-powered mid-line Holiday Rambler Ambassador and Monaco Knight, companion coaches manufactured by Monaco RV, have been significantly upgraded for the 2012 model year with new front and rear styling that gives them a more aerodynamic, fuel-efficient shape. “It’s got a new look for our family DNA, and it’s something you’re going to see come across on all of our products going forward,” said Mike Snell, vice president of sales for the Navistar subsidiary. The 36-foot triple-slide Holiday Rambler Ambassador unveiled at the show is built on Monaco’s proprietary Roadmaster RR8RR chassis powered by a 350-hp International MaxxForce 10 engine. MSRP: $260,000.

The Winnebago ERA 70A with an optional patio tent.

The industry’s first all-electric motorhome – the Class C E Tahoe from MVP RV – will hit the market later this year. The show’s pre-production E Tahoe was fitted with a drivetrain, charger and battery system developed by Balqon Corp. The E Tahoe has a range of 200 miles from a set of batteries installed along the undercarriage of the rig. MVP President Brad Williams said the E Tahoe will cost more than conventional Class C’s but that no retail price has yet been established.

Pleasure-Way Industries of Saskatoon, Saskatchewan, Canada, has added a third floorplan for 2012 to its Plateau Class B series – a two-person motorhome with a permanent rear bed that has 22 cubic-feet of underbed storage accessed with a hydraulic lift through the motorhome’s rear barn doors. The 22-foot Plateau RB also features sliding maple doors with frosted inlays that close off the bedroom area from the rest of the motorhome for privacy. Built on the Sprinter chassis with a gvwr of 11,050 pounds, the Plateau is equipped with a high-mileage 6-cylinder turbocharged diesel engine. The motorhome also includes swivel captain’s chairs, Corian countertops, maple cabinets, Ultraleather furniture, TV center and a workdesk. MSRP: $113,670.

Roadtrek Motorhomes, of Kitchener, Ontario, Canada, weighed in for 2012 with the N6-Active, a new 20-foot Class B motorhome with a pop-up top built on a Nissan NV 2500 fullsize van chassis. According to Roadtrek, the N6-Active gets up to 18 mpg. Designed for families moving into an RV from an SUV, the N6-Active, equipped with three rows of seats, a refrigerator, microwave, hot/cold sink and exterior shower, will be sold through Nissan automobile dealers with an MSRP in the high $60,000s and through RV dealerships with an MSRP in the low $70,000s.

Tiffin Motorhomes, of Red Bay, Ala., has added an 11.9-l 500-hp Cummins ISX engine to its top-of-the-line Zephyr diesel-pusher motorhome series for 2013. The quad-slide Zephyr, built on a Spartan K2 chassis with a gvwr of 46,000 pounds, is available in two 45-foot floorplans. The Zephyr steering wheel in the redesigned cockpit has been pushed 101â„2 inches forward to remove some of the dashboard depth and to make it easier to see over the new front cap. Designed with a large rear walk-in bedroom closet, the Zephyr includes a full-height bath and an L-shaped convertible sofa with the option of locating the dinette on either side of the coach. MSRP: $575,000.

Click on the thumbnails below for more pictures from the 2012 National RV Trade Show!