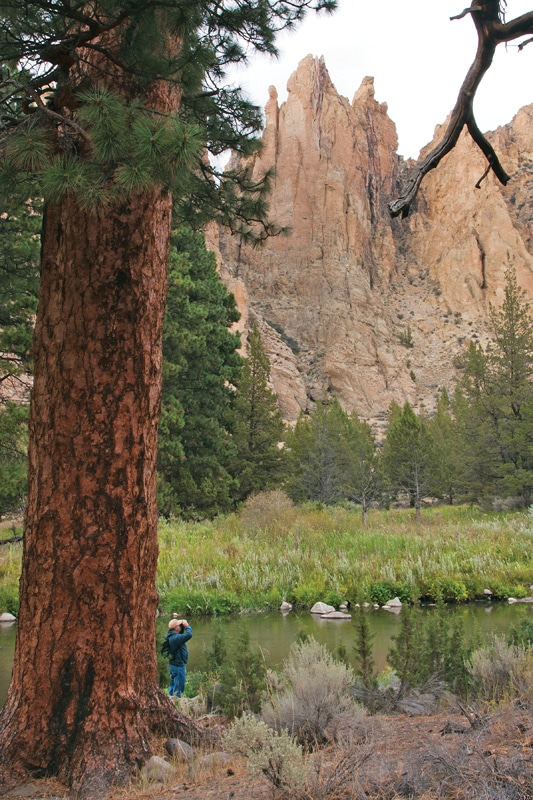 Wy’east and his brother, Klickitat, sent great clouds of black smoke and streams of liquid fire in a vicious rivalry over beautiful Squaw Mountain. According to Native American legend, the brother mountains growled and hurled hot rocks setting the forest on fire and sending the people into hiding. Klickitat won the battle but Squaw Mountain loved Wy’east and fell into a permanent sleep. Deeply saddened, Klickitat dropped his head, and the great mountain, now known as Mount Adams, never raised his head again. Wy’east lost the mighty battle, but he still holds his head proudly. At 11,239 feet, Wy’east is better known today as the highest peak in Oregon – Mount Hood.

Whether you like to ski, hike, climb, eat or sightsee, the Mount Hood region has so much to offer. Why not extend your stay and use the area as a home base, save gas and travel with your dinghy to enjoy these five fabulous day trips.

With 300 days of sunshine, the scenery and climate here are drastically different from Mount Hood, though it is located a mere 90 minutes away. If you happen to have a rainy day at Mount Hood, drive to Smith Rock where you’ll have a good chance of enjoying a sunny day in a completely different environment. While Mount Hood offers a rugged, snowy peak surrounded by forests, Smith Rock showcases a dramatic rock canyon and winding river. Appearing as though it is a scene from the American Southwest, the park is actually located in central Oregon’s high-desert country. Enjoy the canyon view from above, or take a leisurely hike along the Crooked River for an up-close view of the spectacular rock formations. Want a little adventure? Smith Rock is an internationally renowned destination for rock climbing. Whether you like to climb or watch others conquer the cliffs, if you like rock climbing, you’ll be fascinated with this park. With several thousand climbs, the park features gorgeous rugged cliffs made of welded tuff, a type of volcanic ash erupted under extreme heat and pressure. Be sure to look closely at the cliffs for golden eagles and their nests. Prairie falcons, mule deer, river otter, beaver and even cougar have been spotted in the park. Make certain you have your camera and stay until sunset for some spectacular changing colors on the rocks and in the sky.

Horsetail Falls is one of many waterfalls in the Columbia River Gorge National Scenic Area.

Spend a day enjoying this 35-mile-long scenic drive through luscious orchards with impressive views of Mount Hood and you’ll have a feast for your eyes and mouth. America is the third largest pear producer in the world; and the Pacific Northwest is the largest pear producing region with 80 percent of the nation’s crop. The pear also happens to be Oregon’s state fruit. But don’t think it’s all about pears here, because on this day trip you can tempt your tastebuds with such delights as homegrown cherries, peaches, apricots, plums and an assortment of common and not-so-familiar varieties of apples. Among the more than 30 stops on the Fruit Loop are several vineyards that offer award-winning wines. Pinot noir, pinot gris and Chardonnay grapes are nurtured at Wy’East Vineyard where they offer hand-crafted wines. Other wineries have some unusual offerings including an organically grown pear wine and an award-winning pear brandy. Visit the Gorge White House, which is listed in the National Registry of Historic Places, and you can taste wines from more than 30 local wineries, while enjoying picturesque views of Mount Hood. Another stop on the Loop produces 4 to 5 tons of blueberries annually on just 1 acre, due in part to the volcanic soil from Mount Hood; Nelson’s Blueberry Farm also boasts the “best view of Mount Hood in Oregon.” Whether you make a few stops or take the full tour, when you see signs indicating prices like 25 cents per pound for pears, you’ll want to make sure you have plenty of room in your vehicle for your choice of tasty treats.

An Oregon must-see, this National Scenic Area features the second-largest river in North America and more than 75 stunning waterfalls including the 620-foot-high Multnomah Falls. A short trail leads you to the nearly 100-year-old Benson Footbridge where you can gaze at the picturesque upper falls from the bridge, and then turn around on the bridge and view the lower portion of the magnificent waterfall as it plummets to the base. Located near the base is the 1925 Multnomah Falls Lodge, an architectural beauty in the Cascadian style built with native split fieldstone. As you drive on the Columbia River Highway through the Gorge, notice how the road showcases many of the waterfalls and beautiful views; this was by the design of the highway’s engineer, Samuel C. Lancaster. The first paved road in the Northwestern U.S., the Columbia River Highway, is also the oldest scenic highway in the U.S. and the first to be designated a National Historic Landmark. Considered one of the greatest engineering feats at the time, the King of Roads is now a National Scenic Byway, making the road itself a destination. Take the road to Crown Point State Park for a stop at Vista House. Formally dedicated in 1918, the octagonal Vista House was built by architect Edgar Lazarus. Located 733 feet above the Columbia River, Vista House lives up to its name, providing you with a fabulous panoramic view of the Gorge. Be sure to look for the 30-foot lone rock rising out of the river. This basalt formation was named Phoca Rock by Lewis and Clark, from the Greek word for seal. The great explorers saw sea lions here and knew they were close to the ocean.

The Spring Creek National Fish Hatchery is vital to the survival of the Tule Fall Chinook Salmon.

Sea lions are just one of the many obstacles that the Tule Fall Chinook salmon must face as they swim upstream in the Columbia River to spawn. Fall Chinook are found from Alaska to California, however, only the Tule are adapted to spawn in the lower Columbia River. Since salmon return to their place of birth to spawn, it is as though each stream has its own type of salmon. If the Tules would disappear, they cannot be replaced with another type of salmon, even those who live in the upper Columbia River. If salmon cannot find a suitable area to spawn, they will die looking and never spawn. Since there is very little natural spawning habitat remaining in the river, the Spring Creek National Fish Hatchery is vital to the survival of the Tule Fall Chinook salmon. It’s also a fascinating place for you to watch how nearly 15 million salmon are raised. Learn how the fish return to the hatchery from the ocean, climb fish ladders and why the U.S. Fish and Wildlife Service need to collect eggs and sperm to have the salmon reproduce. Depending upon your arrival date, you could see fish releases, marking of fry or you just might be fortunate to watch the salmon enter the fish ladder from the river and watch them jump level after level, until they reach the top holding area. The salmon return here in September every year after a grueling journey. Fortunately for you to travel to Spring Creek it’s a lot easier, you simply need to cross over the river to the Washington side. An interesting route to take is via the Bridge of the Gods, built in 1926, it’s called the modern bridge. The Native American legend about Wy’east and his brother claims that in their anger, the brothers destroyed the original natural stone Bridge of the Gods. Interestingly, scientists believe a giant landslide occurred in this region 1,000 years ago creating a natural dam and over time, water eroded the dam and created a natural stone bridge, which eventually fell causing the Cascades rapids.

Though the last eruption of Mount Hood occurred shortly before the Lewis and Clark expedition ventured here in 1805, the mountain is a Quaternary stratovolcano and Wy’east still demonstrates its anger with sporadic earthquakes and emitting steam and other gases through extensive fumaroles. Despite the thermal activity, Mount Hood has 12 glaciers and is the only ski area in North America that is open all year. Located at the 6,000-foot level of the snowcapped mountain is Timberline Lodge. Even though you may not need lodging, you’ll want to make a stop at this Depression-era wonder. Built primarily by hand, this National Historic Landmark is an impressive tribute to the craftsmanship of the time. Ninety percent of the workers were previously unemployed and hired to complete this project through the Works Progress Administration (WPA), a part of President Franklin Roosevelt’s New Deal plan. Top pay for building trade laborers was 90 cents per hour. The original survey of the site was done in 14 feet of snow but due to the uncertainty of the future of the WPA and extreme weather on the mountain, the remarkable lodge was completed in an amazing 15 months. Dedicated by the President in 1937, you may take a free U.S. Forest Service guided tour of this exquisite lodge, which was constructed with massive native timber and stone from the wilderness. It’s furnished with handmade original works in wood, wrought iron, mosaic, painting, carved linoleum, weaving and stained glass. If you visit during winter, be aware – the ground floor of the Lodge is typically buried with so much snow that the entrance is through a snow tunnel or directly to the second floor. Whenever you choose to visit, plan to savor a delicious meal or drink at the Lodge to celebrate its 75th anniversary this year, then step outside and enjoy the impressive view. Next to you is the peak of Mount Hood, rugged and magnificent. Then gaze at the land the great Wy’east looks upon – a land of rich volcanic soil and luscious orchards, a land of waterfalls, canyons and wildlife. The mountains in the distance stand like majestic invitations calling you to explore. You can almost hear the words of the Native American Proverb, “Listen to the voice of nature, for it holds treasures for you.” 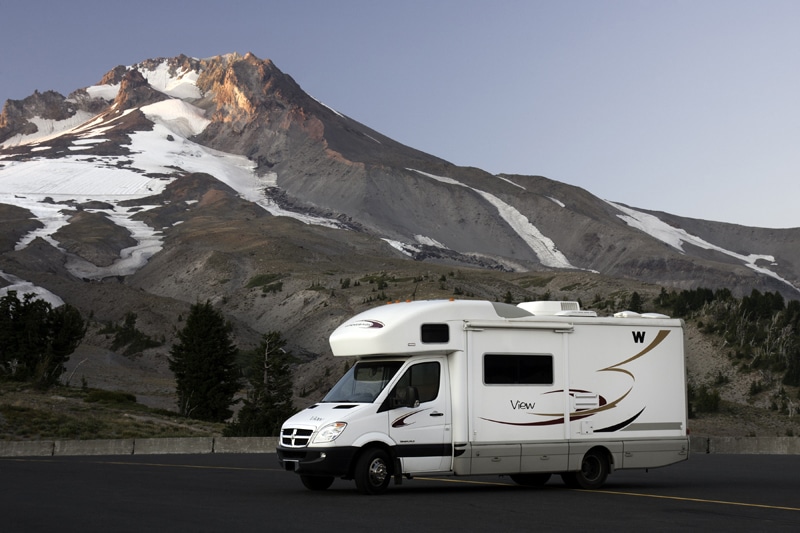 The view of Mount Hood from the Timberline Lodge parking lot is spectacular.

Smith Rock State ParkLocated off U.S. 97, 9 miles NE of Redmond. Daily parking permits are $5. If you plan to visit several Oregon parks, you may want to purchase a 12- or 24-month pass, ($30 and $50 respectively), which is transferable among vehicles; 800-551-6949, www.oregonstateparks.org/park_51.phpHood River County Fruit LoopMany locations on the Loop have a Hood River address. A map is available at the Hood River Visitor’s Center off Exit 64 on I-84; 800-366-3530, www.hoodriverfruitloop.comColumbia River GorgeAccess points at Hood River, Troutdale, Cascade Locks and The Dalles. Multnomah Falls and Vista House are located between Troutdale and Cascade Locks on the Historic Columbia River Highway.Spring Creek National Fish Hatchery On Highway 14 in Underwood. Open 7:30 am-4 pm daily, Sept. through May, weekdays from mid-May through Aug. Bridge of the Gods is located by the Port of Cascade Locks; toll bridge, cars $1; 509-493-1730, www.fws.gov/gorgefish/springcreekTimberline LodgeSkiing is open 12 months; closed for two weeks in September; 503-272-3311, www.timberlinelodge.com