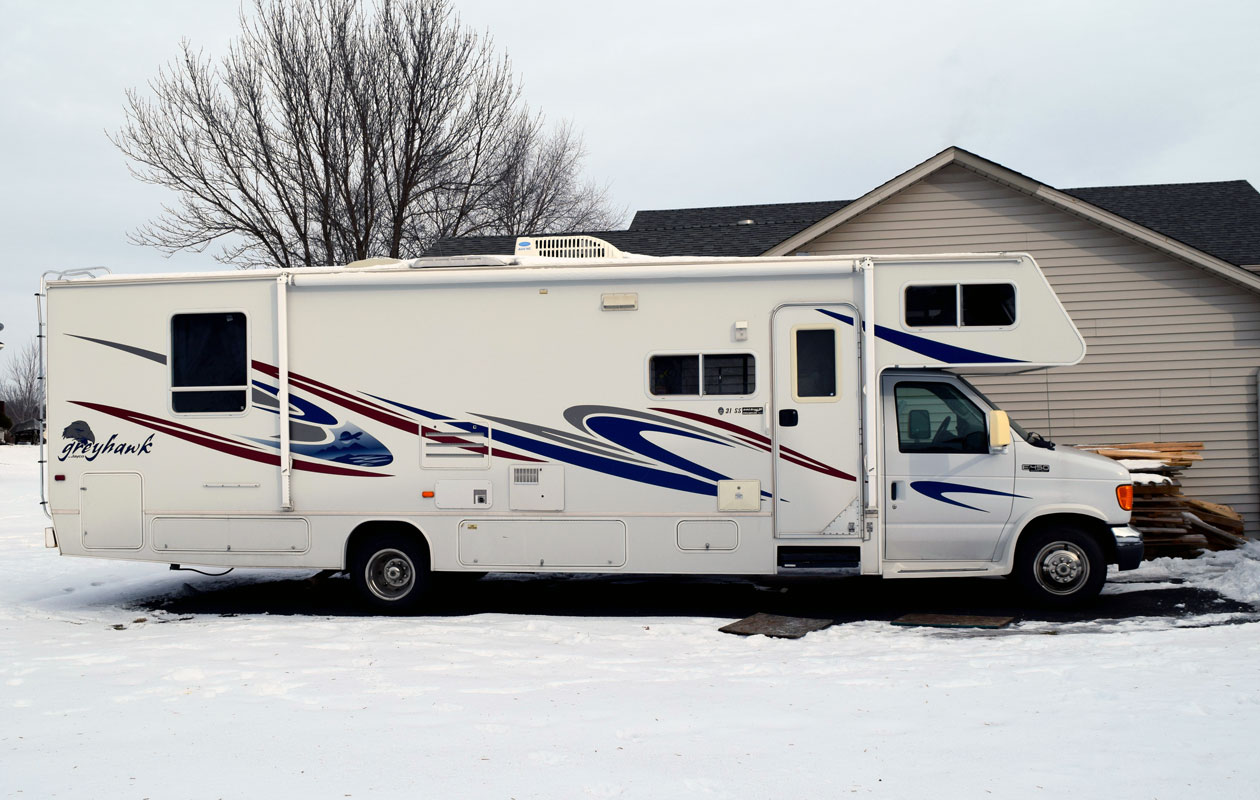 This young millennial couple learned how to update an older motorhome on the fly and is transforming a 15-year-old Class C into the coach of their dreams.

As we step into the motorhome, kicking snow off our boots, I notice small signs of construction — tools are scattered on the kitchen counter, Goo Gone resting near the sink. Considering the remodel project I know is being undertaken, I am surprised at how clean and complete it looks.

I can see the vision for the project — the bedroom is already finished and work has begun on the bathroom and kitchen. The bedroom, a bright and airy room, feels like something right out of a home magazine.

“We are tackling the bathroom next,” my hostess says, as we continue the tour.

When Minnesota couple Becka Kwiatkowski, 27, and Nick Narusiewicz, 28, purchased their first camper, they didn’t realize they were opening a door that would just keep expanding.

It started small, with a StarCraft Venture from the 1970s given to them by Nick’s uncle.

“We originally wanted one so we didn’t have to sleep on the ground anymore when we went up to the Brainerd International Raceway to watch Nick’s brother race his dragster,” Becka says.

Becka, a care manager at a counseling clinic who is going to grad school to become a therapist, and Nick, a millwright who travels to different job sites, didn’t imagine what they were getting into with this first little camper — or the love of travel it would inspire.

“Despite the fact that we loved the 70s-orange-plaid-and-laminate-wood monster, it was definitely more work than it was worth,” she says. “The popup rods were starting to rust, and there was definitely a time or two that Nick had to go sprinting across the freeway to catch the spare tire after it unhinged itself from the back.”

Eventually, the couple moved to something larger, a 28-foot Spree Travel Trailer. But their new trailer wouldn’t be around for long before they started debating the pros and cons of a motorhome instead — and the idea of a motorhome won.

“We had been toying with the idea of upgrading to a motorhome for a while because we loved the idea of being able to put the slide in and get out of Dodge,” she says.

She knew from the start that they wanted more than just to purchase something else, they wanted something with remodel potential.

“I loved the idea of getting one, but they were all so ugly on the inside,” she says. “We want to see the world in a beautiful motorhome, but the price of the beautiful ones doesn’t quite fit the budget of a support staff worker and blue collar man.”

Becka started researching and found out that there is a large culture around renovating rigs. So, they looked for a sturdy motorhome with good bones and low miles, one that was a little older and allowed Becka to “work her magic” on it.

They traded in the trailer for a Class C 2005 31-foot Jayco Greyhawk. And this is where the adventure truly started.

“I am making it beautiful myself,” she says.

The first step in the remodel was to remove the window treatments in the entire place, letting natural light in to inspire the rest of the transformation.

“It sounds simple, but there are a crazy number of nuts and bolts in those things,” Becka says with a laugh.

From there, she moved to the bedroom. Wishing to create something light and spacious-feeling, Becka avoided the traditional dark colors and patterned wallpaper that can make a small space feel even smaller. She scoured the internet for ideas, often finding inspiration from others on Pinterest. They painted the bedroom walls and cabinets white, replacing the cabinet hardware. It is a stark contrast from the original woodwork that darkened the space.

She removed the accordion door that separated the bedroom from the shower and bathroom.

The couple is intent on doing all the work themselves, and so far, it has been mainly cosmetic.

“Luckily, we’re both pretty handy,” she says, adding that they have learned that things are definitely not as easy as it looks on YouTube. “The DIYers on there are more experienced than us, and there have been some bumps in the road, but we are starting to see progress now.”

One of these bumps was the stick-on shiplap Becka applied to the wall around the dining area and couch. As she points out where is has started bubbling up, she explains that she knows it will only get worse once the summer humidity hits.

Shiplap was added on the wall and seating was reupholstered in the dining area.

“It looked nice, but I am going to do something else there instead.”

For those looking to do their own renovation, Becka suggests going into the project with a lot of patience and research.

“There are a million blogs and DIYers who do this, and they have learned by trial and error how to make it beautiful and functional.”

She says the most difficult part is underestimating the amount of work it takes.

“You’d think ‘Oh, it’s such a small space, this will be nothing,’ but it’s a lot more time-consuming than you’d think. It just takes time and patience.”

Though most of the space will be white in an effort to make it look and feel larger, the lower kitchen cabinets will be offset with blue-gray paint. The countertops are being resurfaced in marble contact paper.

“I’d also love to do vinyl wood planks on the floor, but I’m still talking Nick into that one!”

The goal is to complete the renovation by Memorial Day 2020. This poses some challenges, as Minnesota winters are notoriously cold and unpredictable — not at all ideal for working on a motorhome renovation.

But the couple is determined.

“We want to head up to Itasca State Park that weekend,” Becka says. “We have plans this summer to take a big road trip out West to see Beartooth Pass, Yellowstone, the Grand Tetons, Custer State Park and the Badlands. It will be Nick’s first time out that way, and I couldn’t be more excited to show him!”

The couple often travels with their bird, Goose, a green cheek conure.

Never imagining their first popup camper would lead to this, Becka says they are enjoying the process and are excited to hit the road, getting away from the hustle and bustle of everyday life.

“I think humans often get too caught up in all the drama and stress of work, school, responsibilities, and what-have-you, and this motorhome is our chance to escape that and find some peace.

“It has brought a huge amount of spontaneity into our relationship — the ability to just hop in the motorhome without having to plan where we’re going or where we’ll stay, it really brought out the adventurer in both of us.”