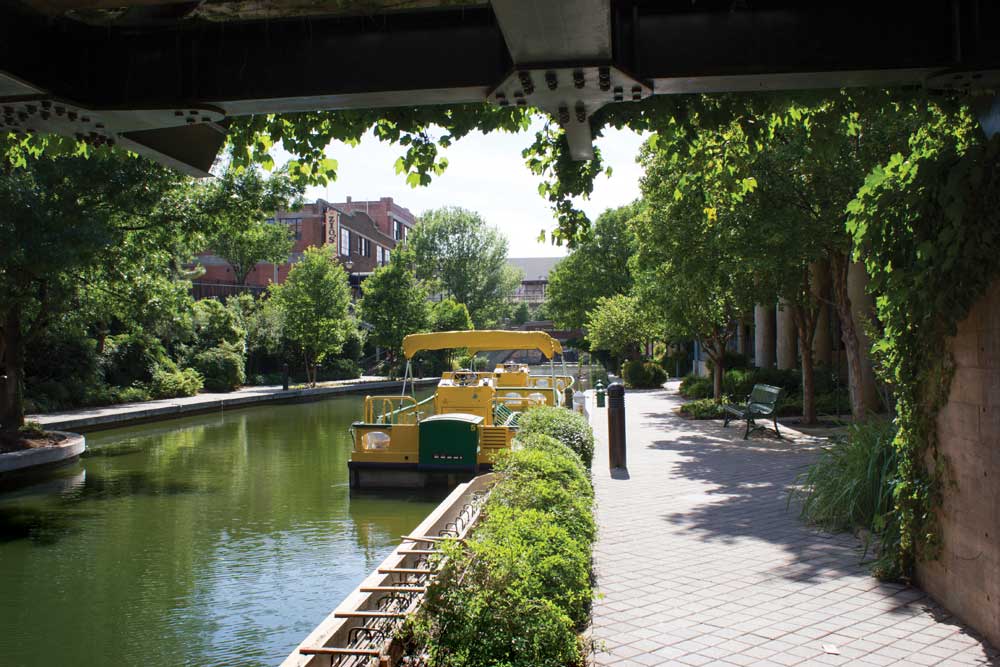 Do you remember the weather events making the national news in May 2015? Oklahoma had experienced destructive tornadoes with record rainfall and flooding. Nevertheless, the lure of exploring the many attractions in this resilient city overcame our doubts. On an RV trip in June, my husband, Jim, and I spent five days falling in love with Oklahoma City under clear blue skies.

After traveling hundreds of miles to reach our destination, Jim and I felt like kids being let out for recess. We couldn’t wait to get out and play. On our first day, we rode our bikes on the 9½-mile paved trail around Lake Hefner. Even with several short stops to take photographs and one longer one to watch kiteboarders defy gravity with 10-foot jumps, we finished the ride in 90 minutes. At one stop we talked to some locals who were thrilled that the lake was filled again. For the last several years, Oklahoma had experienced severe drought. Lake Hefner and nearby Stinchcomb Wildlife Refuge had nearly dried up. The upside to the recent rains was that the lakes and rivers were filled once again.

We drove a few miles to the 1,000-acre Stinchcomb Wildlife Refuge. In spite of a steady wind, kayakers and stand-up paddleboarders were taking to the water. We launched our tandem kayak. As soon as we turned the corner into a quiet, tree-lined waterway, we were protected from the wind. A handful of egrets populated the shore, and other birds sang from their hidden perches in the forest. Again, we encountered locals praising the recent rains.

Visitors can learn more about Oklahoma City by taking a tour of Bricktown in a water taxi.

Oklahoma City’s history can be revealed by experiencing its districts. During our brief stay, we explored Bricktown, Downtown and the Adventure District. We saved others for our next visit, including the Boathouse District, a hot spot for outdoor recreation, and Stockyards City, home to Western shops.

We spent our second day exploring Bricktown, a former warehouse district now filled with restaurants, shops and the mile-long Bricktown Canal. We took a tour on a water taxi to learn more about the area. The Bricktown Canal, AT&T Bricktown Ball Park and seven other sites that provide sports, recreation, entertainment, cultural and convention facilities were the result of Metropolitan Area Projects (MAPS), a temporary one-cent sales tax approved by city voters in 1993. By the time the tax expired in 1999, it had generated $363 million in tax revenue and interest. Now locals and tourists alike can enjoy the results of this forward-thinking capital improvement program.

Getting There:
Oklahoma City is located on the Interstate 35 corridor, which travels south into Texas and Mexico and north toward Kansas.

At the south end of the Bricktown Canal, the Centennial Land Run Monument pays tribute to the settlers competing for unassigned land in Oklahoma Territory in the Land Run of 1889. At noon on April 22, 1889, more than 50,000 people rushed off to claim their piece of 2 million acres. The Homestead Act of 1862 allowed settlers to claim up to 160 acres, provided they would live on and improve the land. By the end of the day, some 10,000 homesteaders had laid claim to land in the area now known as Oklahoma City. Sculptor Paul Moore created one of the world’s largest bronze sculptures, and when completed, will showcase 45 larger-than-life figures of Land Run participants. The first pieces, a buckboard (four-wheeled wagon) and two draft horses, were placed in 2003. It spans a distance of 365 feet in length and 36 feet in width. Sculptures include a soldier firing a cannon to start the run, 24 horses and riders, various types of wagons, a dog chasing a wagon and a rabbit watching from the sidelines. After getting a glimpse of the monument from the water taxi, we stopped by later in the day to get a closer look. We think Moore did an amazing job of capturing the determination and urgency in the faces of his subjects.

Downtown is home to two must-see attractions: the Oklahoma City National Memorial and Museum and the Oklahoma City Museum of Art. The Memorial Museum remembers “those who were killed, those who survived and those changed forever” in the April 19, 1995, bombing of the Alfred P. Murrah Federal Building. We took a chronological self-guided tour that starts with events of an ordinary business day and a recording of a meeting beginning at 9 a.m. and ending two minutes later when the bomb exploded, the horror and chaos that followed, and the people who ran – not away from the building in fear – but toward it to help. The Outdoor Symbolic Memorial covers the ground where the Murrah building once stood. The Field of Empty Chairs with a bronze and stone chair for each of the 168 people killed, sits beside the Reflecting Pool. The chairs that brought me to tears were the 19 smaller ones representing the children. The Survivor Wall lists the names of more than 600 people who survived the homegrown terrorist attack. The Survivor Tree, an American elm, withstood the attack and is now a living symbol of resilience. We spent time under the tree appreciating how this community banded together with a spirit of generosity that became known as the “Oklahoma Standard.” On the 20th anniversary of the bombing, Oklahomans were asked to recommit to the Oklahoma Standard with acts of service, honor and kindness.

The Oklahoma City Museum of Art has one of the most comprehensive collections in the world of Dale Chihuly’s glass.

The Oklahoma City Museum of Art has one of the most comprehensive collections in the world of Dale Chihuly’s glass. A 55-foot tower consisting of 2,400 handblown parts fills the museum’s three-story atrium at the main entrance. Other collections include American and European art spanning five centuries, photography by 20th-century American photographers, and postwar and contemporary paintings and sculptures. They also host traveling exhibits. We saw Warhol: The Athletes, a series of 10 portraits of famous athletes.

Since we were staying at Twin Fountains RV Resort (866-693-1469, www.twinfountainsrvpark.com) in the Adventure District, we spent two days exploring nearby attractions including two museums, the zoo and a restaurant with delicious food.

I give the National Cowboy & Western Heritage Museum a five-star review for the beautiful and touching way it tells the stories of American cowboys, Native Americans and the pioneers who settled the West. The museum’s signature artwork, James Earle Fraser’s 18-foot-tall sculpture of an exhausted Native American on horseback, The End of the Trail, sits in the entry hall. The museum has a collection of more than 28,000 Western and Native American art and artifacts, ranging from paintings and sculptures to saddles, barbed wire and Native American beadwork. Themed galleries include Prosperity Junction, a replica of a frontier cattle town; Western Performers, which explores the West through movies and books; and the American Rodeo, set in a lifelike arena with bucking chutes. Outdoor sculptures complement the trees, flowers and ponds on the beautifully landscaped, 18-acre site.

A woman I’d met a few days earlier told me her favorite restaurant, Gabriella’s Italian Grill and Pizzeria, was next to the cowboy museum. She described the food in such a way we simply had to check it out for ourselves. Chef Vicki has a passion for real homemade Italian food. I ordered gluten-free chicken piccata, which was served over roasted Brussels sprouts. It was the best restaurant meal I’ve had all year. If I ever make it back to Oklahoma City, I know what I’m having for dinner.

The Oklahoma City Zoological Park and Botanical Garden is one of only 14 zoos in the U.S. that is a fully accredited member of the Association of Zoos and Aquariums and the American Alliance of Museums as both a living museum and a botanical garden. Home to 1,900 animals, the entire zoo is also a botanical garden, with a large collection of hardy bamboo, a 21,000-square-foot Butterfly Garden and more than 4,000 native plants in the Oklahoma Trails exhibit. The 11 distinct life zones unique to Oklahoma are replicated in this exhibit, with more than 100 animal species native to the state and more than 800 individual animals. From the suspended boardwalk, I enjoyed watching the playful interaction between two grizzly bears cooling off in the water. In the Elephant Habitat, we saw these magnificent animals blowing dirt on themselves to protect their skin from the hot sun and insects. The colorful flamingos drew a large crowd of visitors. In the Children’s Zoo, two young girls hand-fed nectar to the brilliantly colored lorikeets. 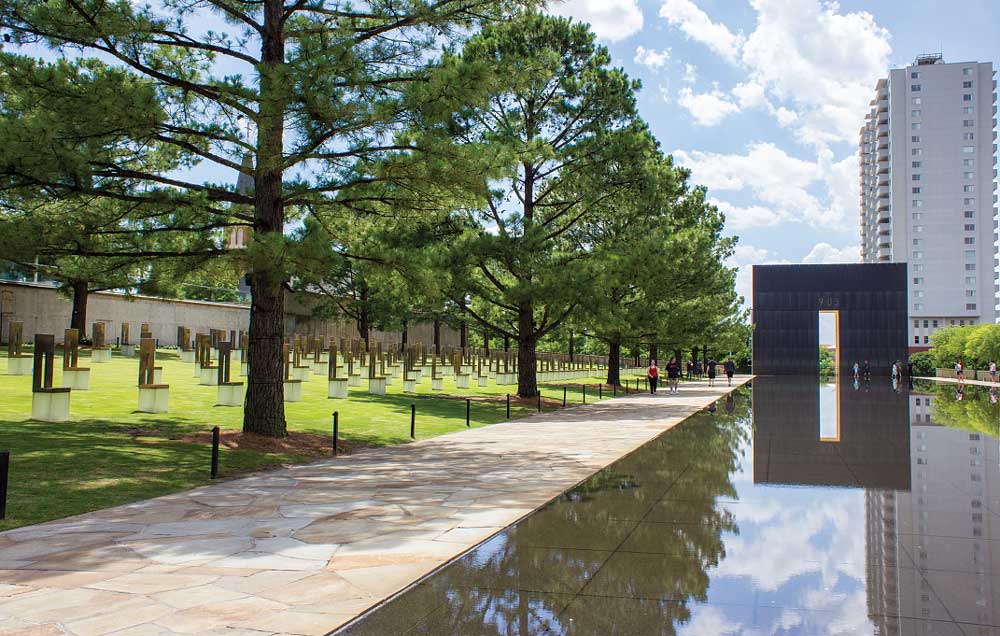 The Field of Empty Chairs at the Oklahoma City National Memorial and Museum honors the 168 people killed in the bombing of the Alfred P. Murrah Federal Building on April 19, 1995.

While we could have spent most of the day enjoying the zoo, we left enough time to check out the attraction next door, the Science Museum Oklahoma. The museum’s mission is to “enrich people’s lives by revealing the wonder and relevance of science.” They do this in a way that appeals to both children and adults. With patient coaching from the attendant, Jim and I both mastered driving a Segway, a two-wheeled, self-balancing, battery-powered electric vehicle. We thought about how much our grandchildren would have enjoyed the traveling exhibit, Grossology: The (Impolite) Science of the Human Body, which explains “why the human body produces mushy, oozy, crusty, scaly and stinky gunk.” In the Eye on the Sky weather exhibit we watched a tornado form that, fortunately, was the only one we saw on our entire trip.

Our last night in Oklahoma City was spent at Topgolf (405-607-7154, www.topgolf.com/us), a premier golf entertainment complex that had just opened. Imagine a three-story driving range, a 240-yard outfield with dartboardlike targets in the ground, and microchipped balls that score points based on distance and accuracy. Each hitting bay accommodates up to six players, either at a table or a comfortable sofa. Our “bay host” – also known as a waiter – took our orders and brought tasty food and drinks. Topgolf uses the freshest ingredients, and most of the food is made daily from scratch. The social atmosphere makes Topgolf appealing to people who love the game as well as people who’ve never swung a club.

Our trip to Oklahoma City was memorable, and not just for the top-notch attractions. The people we met exemplified the Oklahoma Standard with their acts of service, honor and kindness.