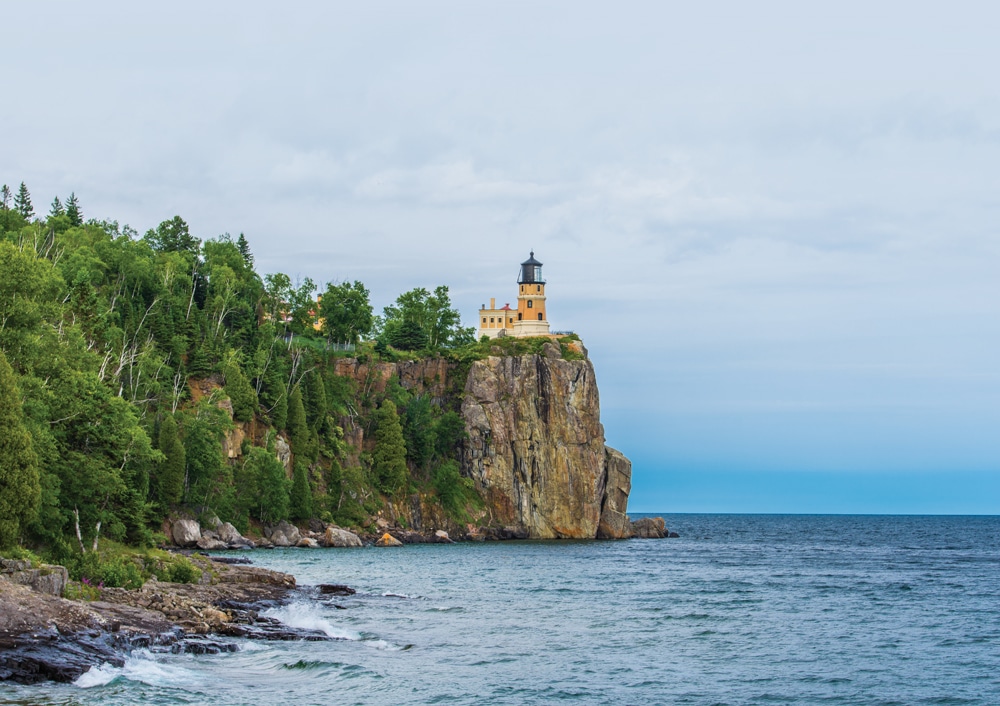 A leisurely spin through the North Star State on 21 scenic byways, from well-traveled routes to remote drives through open prairie and arboreal forests

Whether it’s looking through an opening in the trees lining a shaded boulevard or gazing out beyond one of the city’s many lakes, glimpses of the Minneapolis skyline appear from countless stops along the Grand Rounds National Scenic Byway. A completely urban drive, the route links a dozen metropolitan parkway systems and connects the downtown riverfront with the city’s landmark chain of lakes. Passing through diverse neighborhoods,
it meanders along the towering banks of the Mississippi and brings travelers within footsteps of legendary Minnehaha Falls.

The 52-mile corridor through Minnesota’s largest city is just one of 21 state and national scenic byways crossing from border to border on nearly 2,700 miles of paved roads. Together they ribbon the state, creating a network of intimate routes that take travelers deep into the heart of Minnesota and give access to myriad landscapes, natural wonders and places of historic and cultural significance.

Stretching 414 miles along Minnesota’s western boundary, the King of Trails is the state’s second longest scenic byway. Once a path used by Native Americans and pioneers, the route was paved and dedicated in 1919. This royal road begins in Winnipeg, Manitoba, and extends south to the Gulf of Mexico, following U.S. Route 75 most of the way.

The Minnesota portion of the King of Trails showcases the state’s rich geological history, passing the headwaters of both the Red and Minnesota rivers, crossing the Laurentian Divide and skirting the massive rock outcroppings at Big Stone National Wildlife Refuge. Near the southern border, the state’s Native American heritage is showcased at Pipestone National Monument. Visitors are introduced to the site where the unique red-clay stone used to make sacred ceremonial “peace pipes” is still mined.

Two thirds of the way down the King of Trails, the Minnesota River Valley National Scenic Byway heads east, following its namesake river for 267 miles through the state’s prairie region, connecting river towns and cutting through rich agricultural country with pockets of woodlands and plentiful lakes and rivers. Several state parks and monuments provide glimpses of the area’s natural beauty and cultural history.

Scenic byways in southeastern Minnesota spotlight the unglaciated “driftless” region left from the last ice age. The steep valleys of the Root River system and the looming bluffs of the Mississippi River are two of the major geological features along the 88-mile Historic Bluff Country National Scenic Byway, another of Minnesota’s eight federally designated scenic routes. 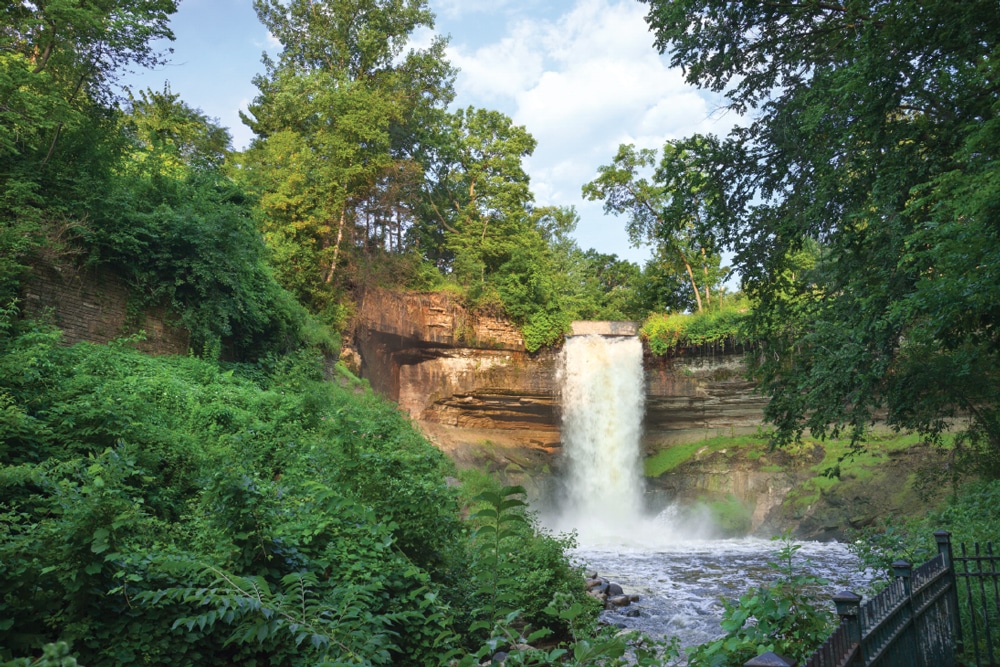 Grand Rounds circles Minneapolis and comes to a city park with Minnehaha Falls as its centerpiece.

Built in the 1920s, the byway passes through small rural towns with regional art galleries and Amish crafts for sale, and offers panoramic views from the towering limestone bluffs. More than 600 spring-fed creeks flow through the countless valleys, many of them
in state parks with opportunities for trout fishing, canoeing and camping.

Near the Iowa border, at the southern end of Highway 56, the remnants of tallgrass prairies that once covered millions of acres across the Great Plains can be found along the 31 miles of the Shooting Star Scenic Byway. Beginning nearby in La Crescent, the Apple Capital of Minnesota, the Apple Blossom Scenic Byway passes a profusion of blossoming orchards each spring and roadside fruit stands in autumn.

Nearly the entire eastern edge of Minnesota is defined by scenic byways, with more than 450 miles paralleling the Mississippi River and Lake Superior from Iowa to Ontario. Five byways form a nearly continuous route that showcases the iconic river, massive freshwater lake and another landmark waterway, the St. Croix River. 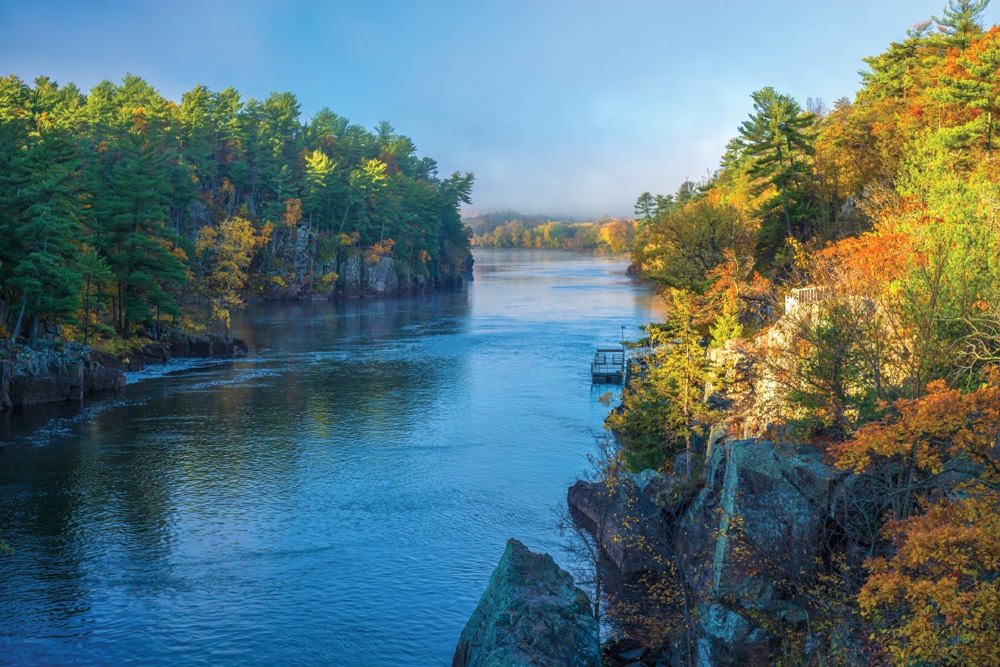 Near the town of Taylors Falls, the St. Croix Scenic Byway parallels the eponymous river.

Minnesota’s longest byway, at 575 miles, the Great River Road follows the Mississippi and is part of a 10-state tourism network. Along its Minnesota route, travelers pass through Winona, a cultural center for music, theater and art, and Wabasha, home of the National Eagle Center.

Not far from Minneapolis, the St. Croix Scenic Byway follows the Mississippi for 124 miles, beginning near the historic river town of Stillwater. The route offers breathtaking views
of the deep, narrow canyon cut by the river to create the dalles at Taylors Falls. As the byway continues northward, the landscape transforms into the pine forests and aspen stands of Minnesota’s north woods.

Used by seasoned motorists as a scenic shortcut to Duluth and points north, the Veterans Evergreen Memorial Scenic Byway is a 50-mile stretch of Minnesota Highway 23 that winds through rolling hills covered in coniferous forests of pine and spruce. Two of Minnesota’s more ruggedly landscaped state parks, Banning and Jay Cooke, are at either end of the byway.

Just under 20 miles long, the Skyline Parkway is the shortest of Minnesota’s scenic byways. It offers stunning bird’s-eye-view turnouts overlooking the port city of Duluth and the westernmost tip of Lake Superior.

Continuing north from Duluth is one of the state’s, and the nation’s, most scenic routes, North Shore Drive. For 142 miles, Minnesota Highway 61 follows the spectacular shoreline of Lake Superior, the largest of the Great Lakes. From the huge iron-mining structures at Two Harbors to the artsy feel of Grand Marais, North Shore Drive channels Minnesota’s north-country character, charm and stunning grandeur. RV parks and state park campgrounds are spread out between roaring waterfalls and cascading rivers, many
of which can be viewed from large turnouts. 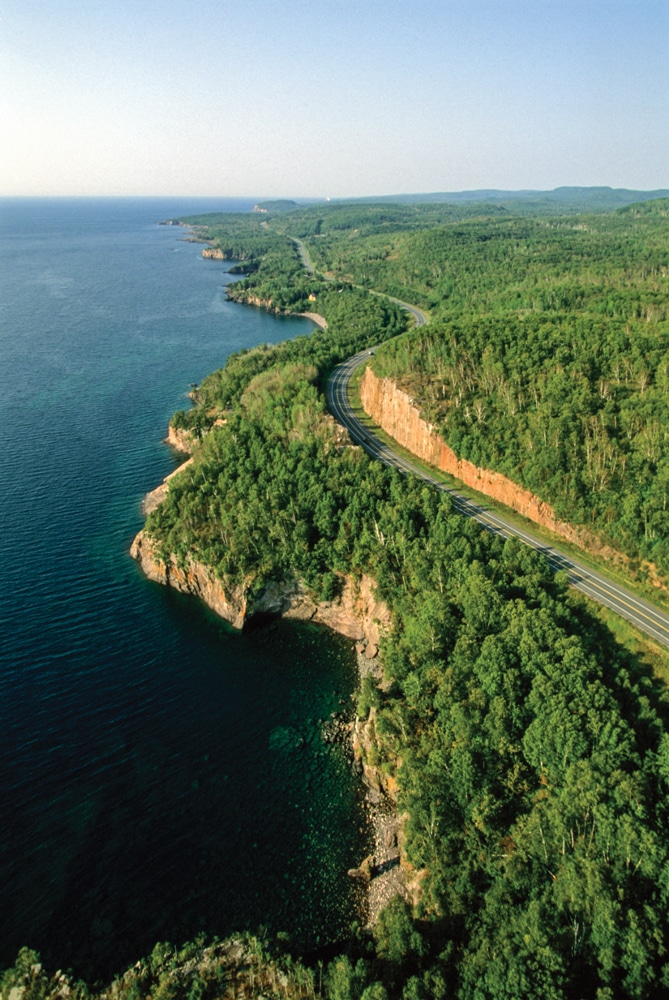 A fitting North Shore climax is a visit to Grand Portage National Monument. The replica of the Northwest Company’s fur-trading outpost and the adjoining Heritage Center offer detailed interpretations of the history and lifestyle of Native Americans and Voyageurs in this region of northern Minnesota and Canada.

The 191-mile Waters of the Dancing Sky route travels east to west near the Canadian border. Named for the frequent arrays of Northern Lights viewable across the region, the corridor is Minnesota’s northernmost scenic byway.

From Voyageurs National Park on the eastern end to the North Dakota border on the west, the byway passes through the Lake of the Woods region with its magnificent fall foliage and world-renowned fishing. The gleaming white-barked birch trees and vivid autumn colors in Zippel Bay State Park continue along much of the byway’s reach across northern Minnesota.

Chippewa National Forest is showcased by the Edge of the Wilderness, Avenue of the Pines and Lake Country scenic byways, introducing travelers to a variety of wonders throughout this predominantly red pine forest, including the largest population of bald eagles in America, Minnesota’s fifth-largest lake (Lake Winnibigoshish) and what’s been called one of the best fall-color routes in the nation.

The Lady Slipper and Otter Trail scenic byways unite for 178 miles of glimpses into Minnesota’s rich logging and agricultural heritage. Otter Trail furnishes its route with easily identifiable signs that guide travelers to landmarks and other attractions. Each byway has campsites that accommodate RVs alongside it or within a short distance, including 21 campgrounds in the Chippewa Forest alone.

Complete with paved highways, plentiful campgrounds and convenient hubs for stocking up on supplies, the Minnesota Scenic Byways network introduces travelers to the many wonders of the land of more than 12,000 lakes. 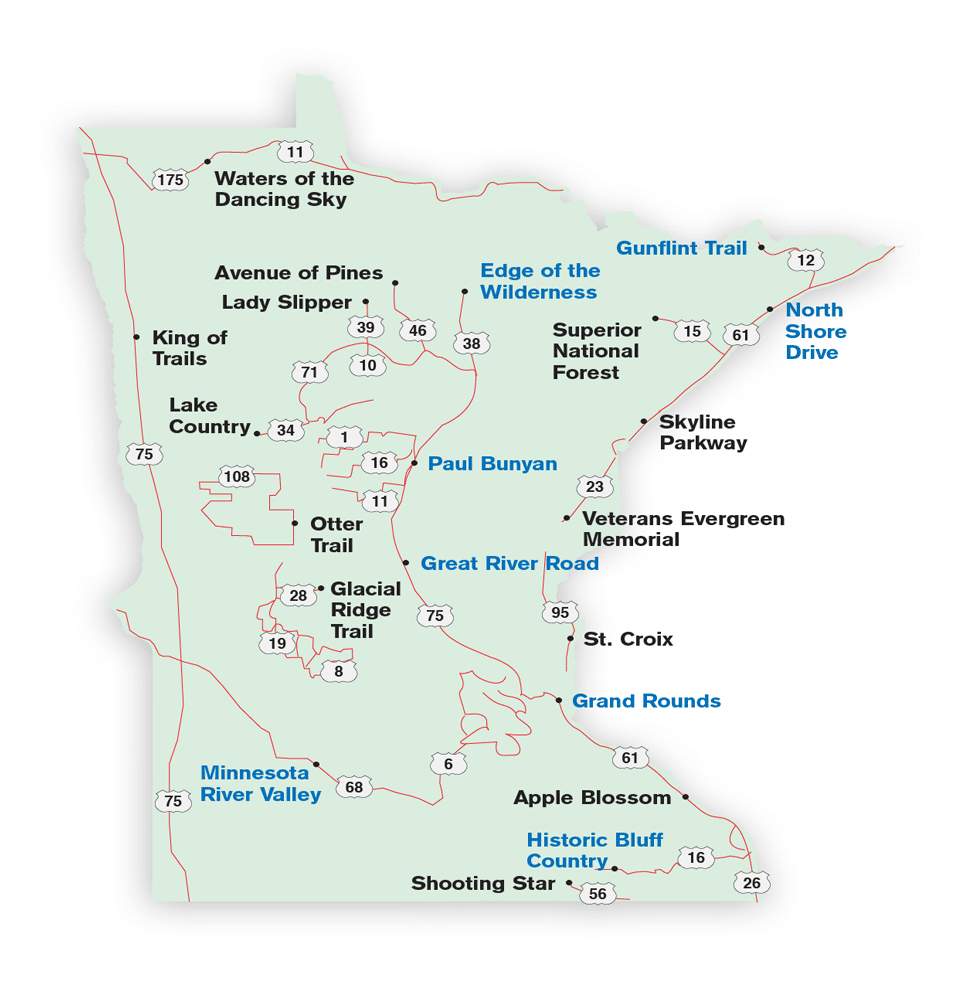 Among its 21 scenic byways, the North Star State lays claim to eight national scenic byways. Selected by the U.S. Department of Transportation for their scenic, recreational, geological, cultural and historic virtues, these routes are considered the cream of the crop when it comes to on-the-road sightseeing.

Edge of the Wilderness
47 miles: Grand Rapids to Effie
www.edgeofthewilderness.com/eow-national-scenic-byway

While all of Minnesota’s scenic byways are paved, many wind through remote areas and are narrow and sometimes shoulderless. In rural regions, especially in western and southern Minnesota, drivers should be mindful of agricultural machinery sharing the highways. In urban centers, particularly on the Skyline Parkway in Duluth, metro traffic and the sometimes narrow neighborhood streets may present a challenge to RVers towing larger trailers.

Good Sam’s website offers tools for finding campsites in Minnesota and throughout North America, from full-service RV resorts and Good Sam Parks to municipal campgrounds and national and state parks and forests.
www.goodsamclub.com/travel/campgroundsandrvparks