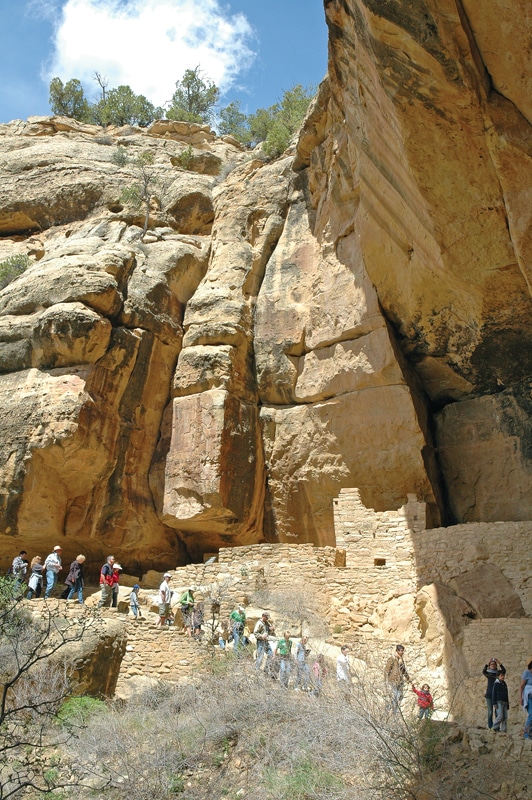 Of all the amazing national parks in the West, Colorado’s Mesa Verde is surely one of the most impressive. Mesa Verde National Park was established on June 29, 1906, by President Theodore Roosevelt to, as he put it, “preserve the works of man.” It was the first national park of its kind. Today it is also a World Heritage Site. Recently voted by National Geographic as one of the top 10 places to travel in the world, Mesa Verde, Spanish for “green table,” offers a spectacular look into the lives of the Ancestral Pueblo people, (sometimes called the Anasazi), who made it their home for more than 700 years, from A.D. 600 to A.D. 1300. With more than 4,000 known archaeological sites, the park has 600 cliff dwellings, some of the best preserved in the world. Basically, cliff dwellings refer to structures built within caves and under outcroppings.

A ranger-led tour through the Cliff Palace is enlightening.

Mesa Verde encompasses 81 square miles and preserves the greatest number of cliff dwellings in America. Obviously, we were not going to see this national park in one day. During our visit, early in the season, the Wetherill Mesa, which includes the Long House, the Step House and the tram to the Kodak House Overlook, were not open. We turned south onto the Chapin Mesa and stopped at the Far View Visitors Center where we purchased tickets for the ranger-led tour through the Cliff Palace. If you can see only one, this is the largest cliff dwelling in North America. The one-hour tour involves climbing five, 8- to 10-foot ladders, on a 100-foot vertical climb. Total walking distance is about a quarter-mile, round-trip. The tour begins at Cliff Palace Overlook, an eight-mile, 20-minute drive from the visitor center.

Tickets are required and can be purchased at the Far View Visitors Center, the Morefield Ranger Station, the Colorado Welcome Center in Cortez and Chapin Mesa Archeological Museum.

Tour-goers are advised that visits to the cliff dwellings can be strenuous. Trails are steep and uneven, with steps and ladders to climb, and are not recommended for those with heart or respiratory problems.

A Walking Journey Through Time

A few of the kivas – Hopi for “ceremonial room” – are accessible by ladder.

Some kivas are open for viewing and have been well restored.

The tour down through the Cliff Palace was enlightening. We think of our society as being so advanced, yet these multi-story buildings were constructed perhaps a thousand years ago without tractors, motors or even a wheelbarrow. These Ancestral Puebloans were farmers and hunters, and deer, rabbits and squirrels were plentiful. The pinyon and fragrant juniper, the same we walked through, were cleared for agriculture. Tops of the mesas were reached by hand-and-toe-hold trails pecked into the canyon walls. Try that with a basket of corn on your arm, we mused.

Another interesting ranger-led tour is the Balcony House. Also one hour long, it involves climbing a 32-foot ladder, crawling through a 12-foot-long tunnel and climbing up a 60-foot open rock face with two 10-foot ladders to exit the site. The tour begins at the Balcony House parking area, a 10-mile, 25-minute drive from the visitor center.

The Anasazi were skilled basket weavers. Some of the finest can be seen in the Chapin Mesa Museum. The baskets were used for carrying water, storing grain and even cooking. Later, about A.D. 550, pottery was introduced, and they became accomplished potters. Since the Anasazi kept no written records, their artifacts are the only link to understanding their interesting culture.

There are numerous hiking trails and self-guided tours to sites like the Spruce Tree House, the Puebloan Pithouse and villages. The Spruce Tree House, said to be the best-preserved cliff dwelling, is open year-round, however during the winter months it is available by free, ranger-guided tour only. This one-hour tour involves a 100-foot descent and ascent on a winding path. Walking distance is a half-mile round-trip. Tours begin at the Chapin Mesa Archeological Museum. During spring, summer and fall (early March to early November), the Spruce Tree House is available on a self-guided basis.

Read more about RV destinations in the Southwest.

The pithouses date back to the first Ancestral Pueblo people who settled in Mesa Verde 1,400 years ago. They lived in small rooms sunk a few feet into the ground with a roof supported by timbers. These later evolved into kivas, the Hopi word for “ceremonial room.” A subterranean kiva remained at about 50 degrees Fahrenheit all year round. For the Ancestral Puebloans, it stayed cool in the summer, and only a small fire was needed to keep it warm in the freezing winter. Many of these are open for viewing, and a few are accessible by ladder. Some archaeological digs are protected from the weather.

Several of the park’s best hikes leave from Morefield and climb to spectacular views of surrounding valleys and mountains. Fortunately, most of the major cliff dwellings can be seen from the vista points off the paved roads, but we found it well worth the time to park and walk to some of the overlooks.

The Morefield Campground is four and a half miles from the park entrance. Its 365 sites, some with hookups, are on a first-come, first-served basis. There is a dump station, showers and other amenities. The campground is open from mid-May to mid-October. There are two other beautiful RV parks nearby. The A & A Mesa Verde RV Park is the closest full-service campground to the park entrance, and the Mesa Verde RV Resort is just a half-mile away.

As amazing as Mesa Verde is, still more puzzling is how this civilization disappeared. In the space of a generation or two, they vanished. Today, archaeologists are still pondering why and where they went. The rock walls and pottery shards cannot speak. As one ranger noted, “The Anasazi left so little in their passing, while our civilization is leaving tall buildings of cement and steel, polluted rivers and lakes, huge waste dumps and hundreds of thousands of miles of blacktop.”

“Perhaps,” he continued, “millennia from now, the true measure of the success of a civilization will not be how much it left behind, but how little it left behind.”