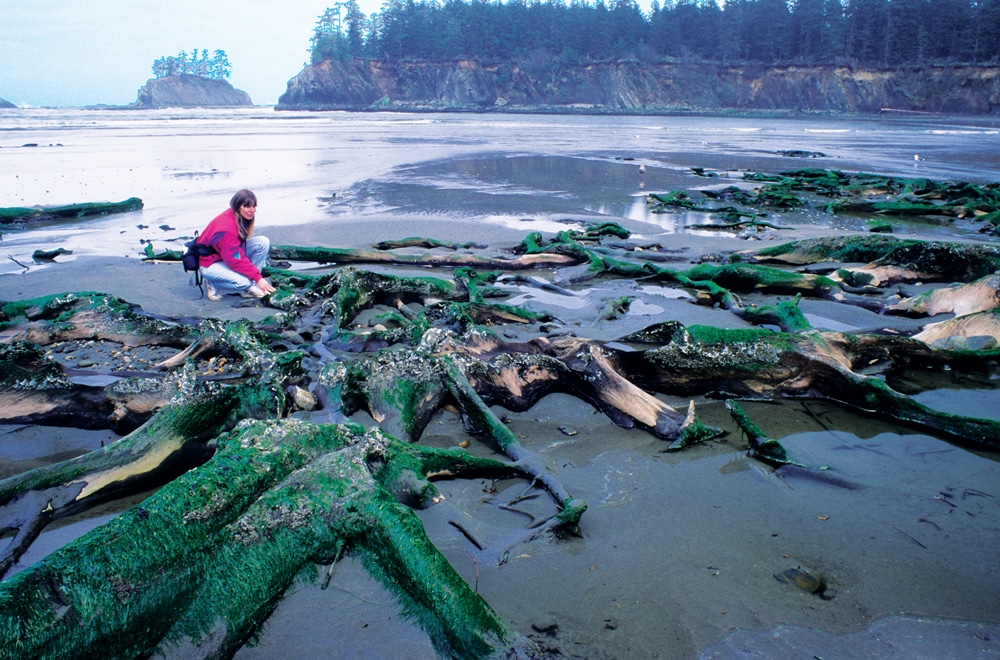 Savoring the Off-Season in the Pacific Northwest

While winter snowbirding is the answer for many, for a few freewheeling spirits confronting winter head-on is the preferred ticket, and it doesn’t get much better than at the Oregon coast, where the Pacific Ocean is anything but placid. Who knew 50-mph winds, 30-foot seas and periods of drilling rain could actually be a calling card? In conditions any worse than these, staging a watch is just plain crazy!

The winter majority, though, sensibly leave the storms to the hardy, or foolhardy, depending on where you come down on the issue. Listening to raindrops, lyrical or percussive, on the motorhome roof is sufficient. Besides, waiting out the storm perfectly pairs with sipping a good Oregon wine or craft brew or curling up with a steaming cup of cocoa.

All celebrate winter’s clearings, which do occur. Despite the national weather maps parking a raindrop over the Pacific Northwest for the duration, rainbows, clearings and sunbreaks (an Oregon weather term for sudden beautiful weather) also grace the winter calendar and are glorious – just harder to time. When they do arrive, it’s time to play.

Coastal winters hold little chance for boredom, with a full lineup of activities. True, some campgrounds and services do close or reduce offerings, but with fewer crowds to fight, you can act on a whim and not solely on reservations.

Although few would dispute the transfixing power of a full-out storm, the aftermath holds magic enough and is a good time for most of us to pick up the show.

The storm-charged seas still crash to shore, and towers of spray rocket two-stories skyward before raining back to earth and sea. Racing cascades stream over the jagged black rock of headlands and jetties, and the thumping surf pounds in your chest. Freshly churned foam walks inland, fashioning a curvaceous foot-high seawall of iridescent bubbles. As wind bites at the ephemeral barrier, rafts of foam bounce down the beach. Giggling youngsters and tail-wagging dogs give chase.

When storms rage, stick to headlands and high ground. The unpredictable surf and fast, erratic sneaker waves that can steal footing make beach conditions too woolly. Beware: Logs normally settled in the sand can dislodge in as little as an inch of water, becoming weapons. Let the storms have the beaches. There will be time afterward for strolling but always keep a seaward eye for sneaker waves, a year-round phenomenon.

Snow is a rarity. Daytime temperatures range from mid-40s to mid-50s, and nighttime lows are in the mid-30s. Whatever the weather, though, come armed with a good rain suit. A jacket and pants are the key to comfort. The protective clothing dulls the wind’s bite as well.

The Art of the Find

Winter beaches look different from the way they look in summer. Storms carry away top sand layers to reveal gravel beds spangled with sea-tossed-and-tumbled gemstones.
Eroded from the inland mountains and transported to the ocean by coastal rivers, rounded agate, jasper and petrified wood fuel the hunt. Downward-looking seekers bend in hopes of adding to pockets and plastic bags. New material brought in or rolled over with the tide starts the hunt anew. Newport blues, blue-black agates of the central coast, are special finds. Shells rarely survive the ride.

Each October through May, Lincoln City’s secret “fairies” hide thousands of decorative floats and sea-inspired medallions for beachgoers to find and keep. The town initiated “Finders Keepers” in 2000, to reinvigorate tourism during winter’s normal sleep. Modeled after an earlier flotsam – the utilitarian blue-green globes formerly used on Japanese fishing nets that would break free and dot winter shores – the modern treasures are art.

The popularity of Finders Keepers has inspired an entire artisan industry of glass blowers. Rainbow-colored floats are gallery staples, together with decorative vases, dishware and original glass art. Several glass shops allow you to breathe life into a float of your own creation. Elsewhere you can try your hand at fused glass art.

The peeling away of sand holds other surprises. You may discover the silvered roots and stumps of ghost forests covered alive thousands of years ago by the advance of sand or a shipwreck long-forgotten. One girl even found a cannon, which sparked a segment of the Public Broadcasting Service’s History Detectives. Other finds are scallop, snail and clam shell fossils eroded from the cliffs, and whale burps – a humorous nickname for the tightly compressed knotted balls of sea grass that tumble to shore.

In winter, lighthouses show their original value – their simple white profiles  wrapped in fog and blinking the way. In the late 1800s, a growing fishing and logging industry compelled safe passage, and the lights met the call of the Pacific’s rough sea, fierce gales and dangerous rocks.

Eleven lighthouses, not all active, line Oregon’s coast. The most accessible are Cape Meares (west of Tillamook), Yaquina Head and Bay (both in Newport), Heceta Head (north of Florence), Umpqua River (southwest of Reedsport), Coquille River (north of Bandon) and Cape Blanco (northwest of Port Orford).

Oregon’s tallest, Yaquina Head, stands 93 feet tall, with 114 steps climbing to its top. Yaquina Bay, although retired after three years, functioned long enough to acquire a ghost. The 1899 mysterious disappearance of a seaman’s daughter and early reports of a young female ghost walking the beach fanned the legend. Heceta Head Light is the most photographed, and the 1870 Cape Blanco Light, atop 200-foot cliffs on Oregon’s most westerly jut, is arguably the most battered. Winds can reach 100 mph.

Near-shore passages of gray whales draw a winter following. During peak passages, whale-watch volunteers staff lighthouse headlands and other elevated seaward posts, providing curious seekers with knowledge and sighting tips. Backs and tails, showery spouts and glassy footprints hint at the multiton through-travelers.
December through early February, the creatures make their annual 6,000-mile journey from the Arctic to the warm waters off Baja California for birthing. The northern return with calves runs March through October.

Sea lions, too, may call your attention with their barking, or you may sense being watched by big black eyes. Harbor seals – small, earless seals with blotchy coats and bulbous heads – bob in the bay and turn curious eyes toward shore.

California and Steller sea lions, eared and dog-faced, can be seen along the coast. While California sea lions are more numerous, the Stellers are bigger and more lionlike. Look for the animals near piers, on rock haul-outs or at the privately operated Sea Lion Caves, north of Florence. At this mainland sea lion rookery, an elevator sinks 208 feet to the cave floor. In winter and fall, sea lions favor the cave, but can also be seen on rocky shores and in offshore waters here and elsewhere.

Sea- and shorebirds, bald eagles and peregrines attract the binocular-eyed, as well. Sometimes, an interloping snowy owl travels can be spotted flying south.

The historic waterfronts of Newport and Florence – the boardwalks, fishing boats, warehouses and buoys – hold even greater romance under gray skies. Fishermen look as if they stepped from the page of a novel. In yellow slickers and bibs and black rubber boots, they move with purpose. Washed by rain, Newport’s sea-inspired murals have renewed color and life.

Turning sights inland, the coastal rain forest is seen at its loveliest. The big firs filter out some of the rain, while the undergrowth is vibrant, polished and new. Falling waters boom in their race seaward. East of Reedsport, Roosevelt elk at Dean Creek Elk Viewing Area rest and graze in the wet grasses. Turnouts allow watching from the vehicle.

Winter travel requires attention to weather and road reports. Tall trees and high winds are a bad combination, as are low areas and high rivers and seas. During big storms, head inland. In the meantime, meet the coast with gusto and bring a smile.

Rhonda Ostertag is a freelance writer who travels and collaborates with her husband, photographer George Ostertag. The couple lives in Oregon when not on the road.