Meeting Up At Four Corners Monument 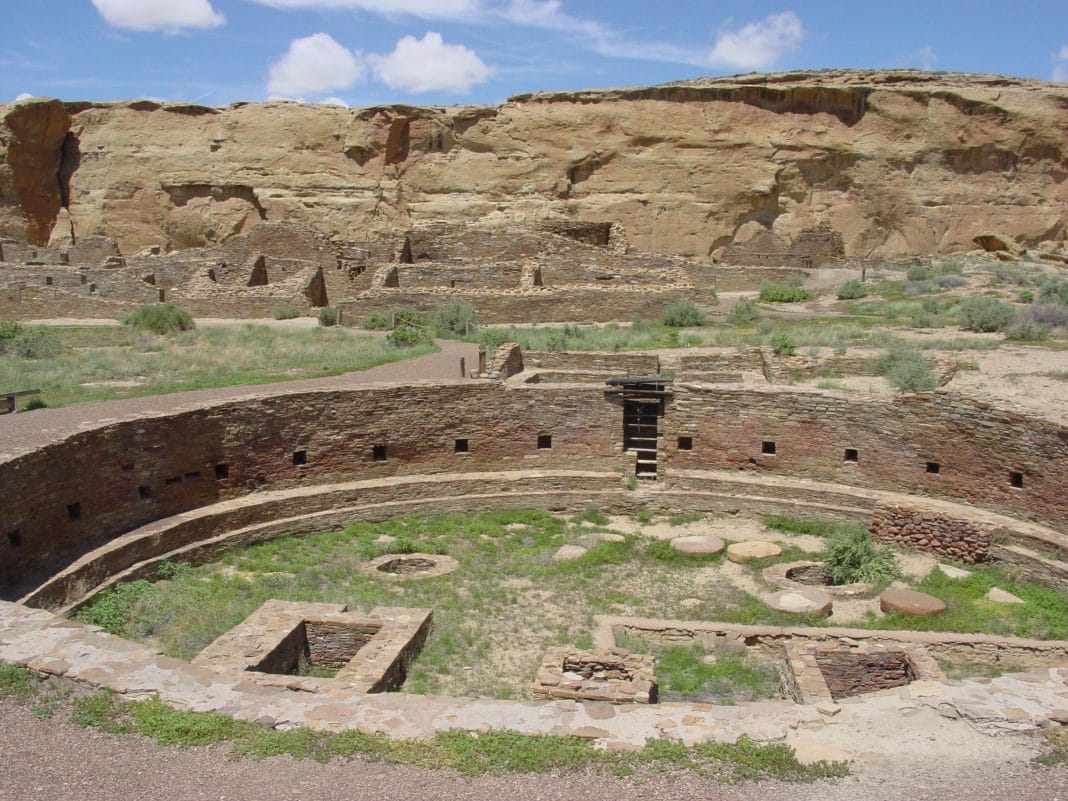 If you’re traveling through the American Southwest, U.S. Highway 160 passes by an interesting point on the map. Four Corners Monument is the only place in the United States where four states (Arizona, New Mexico, Utah and Colorado) come together, and you can even stand in all four at the same time.

That’s kind of fun, but Four Corners is more than a photo op. It’s a starting point for some of the most spectacular scenery in the world, and with today’s fuel prices to consider, we set a coffee cup in the middle of Four Corners on the map to see what was within a day’s drive or less.

First we headed southeast to Chaco Culture National Historical Park. Chaco is not the easiest park to reach. The southern access is complicated and not suggested for RVs. Recommended access is from the north via U.S. Highway 550, County Road 7900 and CR 7950 (a 13-mile-long rough dirt road). Come prepared for an adventure. There is no lodging, fuel, repair service or food available in the park, and the nearest town is 60 miles away.

A view of the great kiva in the plaza of Chetro Ketl, located within Chaco Culture National Historic Park.

Gallo Campground, a mile from the visitor center, has 49 sites with picnic tables and fire pits. The campground has non-potable water and flush toilets, but no hookups or showers. Drinking water is available 24 hours a day in the visitor center parking lot. At an elevation of 6,200 feet, winters can be cold and summers hot.

For stargazers, there is an observatory with a 25-inch Dobsonian telescope. It’s open Tuesday, Friday and Saturday nights from April through October.

The peak of the Chacoan culture began in the mid 800s and lasted more than 300 years. They developed unique masonry techniques and constructed massive stone buildings with multiple stories, some with hundreds of rooms. The precision and skill of the Chacoan masons is still evident in the walls and doors. More than 150 great houses throughout the Chaco Canyon region were connected by hundreds of miles of carefully constructed and maintained roads. The Chaco region was declared a Chaco Culture National Historic Park in 1980 and a World Heritage Site in 1987.

Backtracking north into Colorado, we swung around into Mesa Verde National Park. About 1,400 years ago, long before Europeans claim to have “discovered” the New World, Ancestral Puebloans (sometimes called Anasazi) lived at Mesa Verde. For more than 600 years, these people farmed and hunted, created intricately woven baskets, and developed beautifully designed pottery while living on the mesa. About A.D. 1200, they began to build elaborate stone communities sheltered under the alcoves of canyon walls. Then, in the space of a generation or two, they left. Archaeologists may never know all the reasons why, but by 1300 the Ancestral Puebloans had migrated south. Their descendants are today’s contemporary Pueblo people from Hopi, Zuni and the Rio Grande Pueblos.

Ranger-led tours into the Cliff Palace and Balcony House require tickets available at the Far View Visitor Center, and are the only way to see these amazing dwellings up close. Other areas can be explored without a tour.

The Morefield Campground, four miles past the park entrance, is available by reservation or on a first-come, first-served basis. They offer hookups, a dump station, showers and other amenities. Commercial RV parks are located near the park entrance.

From Mesa Verde we wandered west toward Utah. County Road G out of Cortez is paved and very scenic, and it gave us an excuse to stop at Hovenweep National Monument, famous for its remarkable stonework.

While our general path was leading us toward Monument Valley, we knew we had to spend a night in Valley of the Gods. This may be one of the most overlooked and spectacular drives in the four states region. A well-graded 17-mile gravel road winds through postcard-perfect rock formations. There were several turnouts big enough for larger vehicles, but we had our favorite campsite, just beneath the imposing Castle Butte, already picked out from previous trips. The valley can be accessed from U.S. Highway 163 or state Route 261.

Having a little extra time, we took Route 261 north for a quick look at Natural Bridges National Monument. The route up the Moki Dugway is not recommended for large motorhomes, but if you’re brave, it’s a marvel of road engineering. Climbing 1,100 feet in 2.8 miles with a 10 percent grade and numerous switchbacks, it sounds scary, but it’s really not that bad. Fasten your seat belt, bring your seats to a full upright position and don’t look at the view of the Valley of the Gods below while you’re driving. There’s an overflow area for large RVs at the intersection of Highway 95 and Highway 261. It doesn’t have any services, but it’s free.

High up on Cedar Mesa, Natural Bridges National Monument sits 6,500 feet above sea level. Streams have cut two deep canyons and three massive bridges in sandstone formed from what was once the shore of an ancient sea. Sipapu Bridge is the second-largest natural bridge in the world (Rainbow Bridge in Glen Canyon is bigger). In Hopi mythology, a “sipapu” is a gateway through which souls may pass to the spirit world. The trail to the canyon bottom below Sipapu is the steepest in the park. A staircase and three wooden ladders aid the descent.

Valley of the Gods in Utah presents astounding views.

The road to viewpoints around the rim of the canyon is narrow. Bigger RVs can park and unhook their dinghies at the Ranger Station. The 13-site campground is open year-round on a first-come, first-served basis, but there is a 26-foot length limit. It was full, so we returned toward Monument Valley and found a side road the ranger had recommended to camp for the night.

Heading south now, the turnoff to Monument Valley Navajo Tribal Park is actually in Utah, but crosses into Arizona in less than a mile. Our entrance fee gave us access to the lodge and the Valley Drive, a 17-mile dirt road that starts at the visitor center and heads southeast among towering cliffs and mesas. The road is dusty and steep in a couple of places, and rather uneven, but does not need four-wheel drive and is suitable for the majority of small-to- medium-sized RVs unless there has been heavy rain. As an alternative, there are many Navajo guides and four-wheel-drive Jeep rental outfits that can bring you into more remote areas of the park.

Monument Valley provides perhaps the most enduring and definitive images of the American West. The isolated red mesas and buttes surrounded by empty, sandy desert have been filmed and photographed countless times over the years for movies. We couldn’t help feeling that we had seen it all before. We had!

Wondering where to camp for the night, we saw several RVs parked on a large flat area near the lodge, overlooking Left Mitten, Right Mitten and Sentinel Mesa. There were outhouses but no other facilities, which may be the reason no one came around to collect the $5 overnight parking fee. What a view we had in the morning!

For a little more comfort, the next evening we checked into the modern Goulding’s Lodge and Campground just across the highway from the entrance to Monument Valley Navajo Tribal Park. Full hookups and pull-through spaces were a plus. We poked our heads into Goulding’s Trading Post Museum and didn’t leave for more than an hour. It held a treasure trove of Anasazi artifacts, movie memorabilia, historical photographs and John Wayne’s cabin from the original set of “She Wore a Yellow Ribbon.” We signed up for an early half-day tour at the Goulding’s store the next morning for the best light, and our guide, Joe Nelson, educated and entertained us with many details of formations we had not seen on the 17-mile Valley Drive.

Back on the road, our next stop had to be Canyon de Chelly National Monument, perhaps the highlight of this Four Corners loop. We made ourselves at home in the clean Cottonwood Campground near the canyon entrance and the visitors center. The campground was free when we were there. We signed up for a walking tour the next day with a park ranger. Ranger-led activities are offered at the park on weekends from Memorial Day to Labor Day. Sloshing up the Chinle Wash in and out of the water was a kick, but we wanted to see more of this incredible scenery. We found that the best way was to take a guided tour from Thunderbird Lodge. Seated in an open-air, ex-Korean War six-wheel-drive truck, we motored straight up the river, stopping frequently to admire ancient dwellings built into seemingly inaccessible caves and vertical sandstone cliffs that sliced into a turquoise sky. These big trucks almost never get stuck, but that big winch on the front is not just for looks.

A view of Yucca Cave from the North Rim of Canyon de Chelly.

There are North Rim and South Rim drives that gave us a bird’s-eye view of the canyon where Navajo families still live and farm. Spider Rock, an 800-foot sandstone spire that rises from the canyon floor, is best seen from the view area at the end of the South Rim Drive.

While we managed to stay mostly within our imaginary “coffee cup” ring, we were impressed by how much history, art, culture and stupendous scenery there was in such a relatively small section of our country. Clearly, Four Corners Monument is just a starting point on the map.