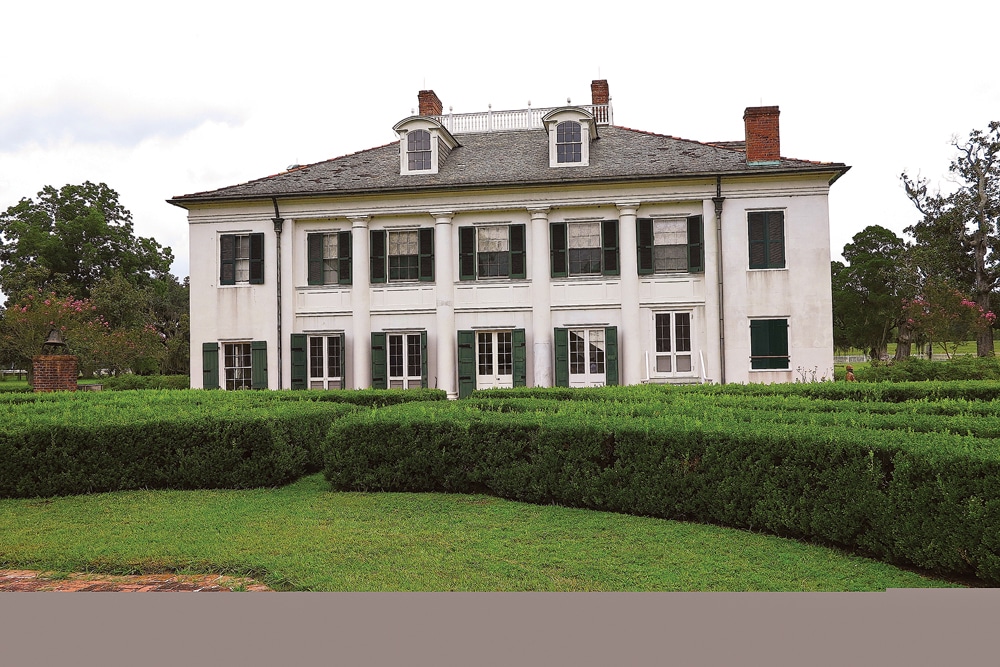 Standing at the rail watching the hypnotic rhythm of the giant paddlewheel’s bright red blades as they churn the café au lait-colored waters of the Mississippi into a white froth, my mind drifts back upstream.

For the past week my family and I have been following the big river’s course, our days filled with jaunty melodies from riverboat calliopes and proud antebellum mansions watched over by gracious ladies in hoop skirts.

While these images from Louisiana’s portion of the Great River Road Scenic Byway may seem torn from the pages of some historical romance novel set in the antebellum South, I can assure you they’re very real. They’re also just a hint of the adventures you’ll find waiting for you when you take The Scenic Route.

Beginning of the End

Evergreen Plantation in Edgard is one of the most intact plantation complexes in the South with more than three dozen buildings on the National Register of Historic Places.

For our third installment in this series, we started on the west bank of the river as we crossed the Arkansas/Louisiana state line. This is deeply rural country with the two-lane U.S. 65 passing through cotton fields on its way to Lake Providence, a brilliantly blue oxbow lake formed when the Mississippi changed its course thousands of years ago. While this stretch isn’t the most exciting part of the byway, its laid-back pace was a refreshing alternative to the coldly efficient interstate highways as we made our way to our first overnight on the opposite shore in Vicksburg, Miss.

The next morning we set out to tour the rolling hills of Vicksburg National Military Park. Though I had been here before, the power of this place still surprised me. It doesn’t take a great deal of imagination to picture the besieged Confederate troops struggling with disease, starvation and the daily bombardment of Union guns as they held off the North’s numerically superior forces for 47 days in the late spring and early summer of 1863.

Driving past the park’s 1,300 monuments, it’s hard to fathom the degree of courage and fortitude displayed by the men who fought and died here. Or to underestimate the battle’s effect on American history, as many experts agree that these six weeks marked the beginning of the end for the Confederacy and changed the way of life along the Great River Road forever.

Slow Down, Sit a Spell

Like the lazy flow of the Mississippi River itself, this is a route to travel slowly. Our next stop was less than 100 miles away in Vidalia, La., conveniently located just across the river from what is arguably the heart of the antebellum South, Natchez, Miss.

Compared to the ostentatious homes that are Natchez’s claim to fame, Vidalia is an unassuming town that makes a great place to park the trailer for a couple of days while exploring the lovingly preserved architectural treasures on the bluff-tops across the river. If you’ve not been here before, by all means make time in your schedule to tour some of the more prominent homes like Stanton Hall, Dunleith and the spectacular Longwood, an imposing octagonal structure made all the more interesting by the story behind why only one of its five floors was ever finished.

Ultimately, we found the pace here so relaxed that all three of us took great pleasure in spending time simply sitting on a bench atop the levee watching 10,000-horsepower towboats push their strings of heavily laden barges up and down the Mississippi.

The next morning we pressed on to see two distinctly differ­­ent takes on the plantation-era experience.

Inside the overseer’s cottage on Frogmore Plantation just west of Natchez, Miss.

For our first stop we detoured west on U.S. 84 to Frogmore Plantation. This 1,800-acre operation still produces 900 bales of cotton annually while also offering tours of the farm’s 19th-century outbuildings, including a “dog trot”-style overseer’s house, general store and a rare 1884 steam-powered cotton gin. We happened to visit on one of the two days each year when the cotton plants were in bloom, but at other times of the year guests can have the equally interesting experience of trying their hands at a little old-school-style cotton-pickin’.

From Frogmore we continued south until we were able to cross over to the east bank on the picturesque new John James Audubon Bridge, named for the naturalist who did many of the paintings for his groundbreaking book, “Birds of America,” at a plantation nearby. Our goal was St. Francisville and the home known as The Myrtles Plantation.

Listed on the National Register of Historic Places, the 1884 steam-powered Munger cotton gin is a highlight of Frogmore Plantation tours

While this unpretentious 1796 manor house’s ornate furnishings aren’t that different from what you’ll find in many fine homes from the same period, what really sets it apart are the long list of traumatic events — and reports of repeated supernatural happenings — that have taken place here over the past two centuries. Listen to these stories for a few minutes as I did (with the hair standing up on the back of my neck) and then tell me you don’t believe the owner’s claim that this one of the most haunted homes in America.

From here we continued south through Baton Rouge toward New Orleans, a city that is as much a part of the Great River Road’s history as the pavement itself.

And speaking of pavement, you’ll find the winding stretches of two-lane blacktop that run between these two river towns on both sides of the river have a certain anachronistic quality. Visit some of the dozen-plus plantation homes here and you’ll find pockets where time appears to have stood still.

In fact, if it weren’t for modern additions like the 40-foot-high levees the Army Corps of Engineers has erected to keep the Mississippi at bay and the gigantic petrochemical plants that have replaced agriculture as the principal driving force behind the area’s economy, in many places the year could just as easily be 1859.

Off the Beaten Path

While first-time visitors will want to check out some of the more high-profile plantation homes like Oak Alley, San Francisco, Houmas House and the enormous 53,000-square-foot white “castle” known as Nottoway, we wanted to dig a little deeper on this visit. In short, we hoped to explore some of the lesser-known plantations that give a closer approximation of what life was like here in the Great River Road’s early 19th century heyday.

With that in mind, we made our first stop Evergreen Plantation. Though the 1832 Greek Revival-style home may not seem as grand as its better known contemporaries, Evergreen’s claim to fame is that it is quite possibly the best-preserved plantation complex in the antebellum South with 37 buildings on the National Register of Historic Places, including an extremely rare double row of 22 original slave cabins. Our 90-minute walking tour was peppered with interesting details of plantation life drawn from more than 500 pages of carefully documented history on this still active sugarcane plantation.

For a counterpoint to the more imposing Greek Revival-style mansions along the Great River Road, we stopped by the Laura Plantation just outside Vacherie, La. While the home’s Creole architecture is less stately than some of the nearby plantations, Laura’s period-correct multicolor exterior paint job definitely makes it stand out from the crowd. The tour also shed light on the French Creole culture that once dominated this area and the home’s namesake, one of a long line of strong women who ran this 12,000-acre sugar cane operation single-handedly more than a century before women’s lib.

While we used New Orleans as our home base for our explorations of this section of the Great River Road Scenic Byway, we also spent our fair share of time enjoying the city itself.

Food is a big part of the city’s attraction for me, and there are some local specialties I often crave. From starting the day looking out at the river while wolfing down powdered sugar-covered beignets from Cafe Du Monde to soaking up the sun on a bench in Jackson Square while savoring sloppy olive salad-drenched mufaletta sandwiches from Central Grocery, it’s fair to say no one went back to the trailer hungry.

New Orleans also has a long list of attractions, from an outstanding aquarium to the National World War II Museum, but it was our midday cruise aboard the historic Steamboat Natchez Riverboat that really added to our feel for life in the plantation era. Rather than some hokey tourist facsimile, the Natch­ez is the real deal, a genuine steam-powered, paddlewheel-driven riverboat not far removed from the boats that plied this river in the days when cotton was king and sugar was queen.

We parked our rig outside Frogmore Plantation’s historic steam-powered Munger cotton gin where horse-drawn carts used to bring the crops in from the fields.

While all good scenic byways must come to an end, few end so abruptly as the Great River Road.

After crossing the Mississippi on the towering twin spans of the Crescent City Connection bridge, we turned off onto U.S. 23 for the 75-mile jaunt down to Venice, a tiny outpost that was nearly wiped off the map by Hurricane Katrina. While this southeastern fringe of Louisiana can’t match the countless and varied amusements of the Big Easy, the place is proof that the “Sportsman’s Paradise” line on Louisiana’s license plates is no empty boast.

Here you’ll find no shortage of inshore fishing guides and off-shore charter boats ready to help you try your hand at landing anything from speckled trout to blue marlin. When I asked one silver-haired local how the fishing was, he smiled as he replied, “If somebody can’t catch their limit here, maybe they oughta take up Parcheesi.”

The Journey is the Reward

Ultimately though, I wasn’t interested in going mano a mano with any of these fighting fish. For me, following Louisiana’s Great River Road this far fulfills a much simpler desire.

You see, the next time somebody starts going on about something being “the end of the road,” I want to be that guy who can nonchalantly say, “Yeah, I know, I’ve been there.”

The literal end of the 2,000-mile-long Great River Road in Venice, La.

Navigating Louisiana’s portion of the Great River Road Scenic Byway can feel like a daunting challenge. As is the case with the rest of this 2,000-mile route (which extends from the Mississippi River’s Minnesota headwaters to the Gulf of Mexico), the byway here is actually made up of a series of roads on both banks of the river.

If that sounds a little confusing, spend some time comparing the maps and driving directions on the National Scenic Byways program’s website with your favorite paper maps — a colored highlighter helps here — and you’ll find navigating isn’t as complicated as it may first appear.

Now, granted, not everyone will have the full 10 days it took us to drive the length of Louisiana’s Great River Road Scenic Byway while reporting this story. Don’t let that put you off, however, as you can enjoy the best parts of this byway in a long weekend by focusing your wanderings on the section between New Orleans and Baton Rouge.

When it comes down to where to spend the night, here are a few places I can recommend from personal experience: