Living an RVer’s Dream on the American River 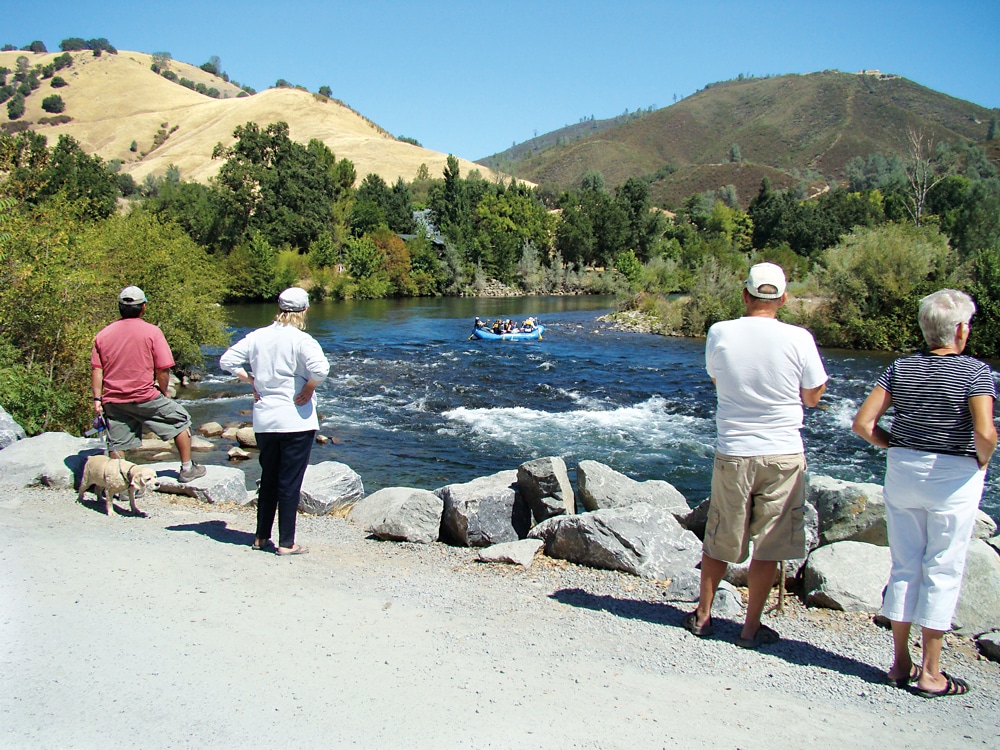 Like many other motorhome enthusiasts, my wife and I have often daydreamed about what our ideal campsite would look like. The most important factor for us is close proximity to water. Being able to see and hear a stream or river flowing by, or waves lapping on the shore, adds an aura of peaceful tranquility to whatever else is going on. If the location also offers generally good weather, fantastic vistas, a variety of fun things to see and do, and interesting people to meet, all the better.

We’ve never found a place that offers more of the attributes we seek than being camped in our motorhome right on the banks of the American River in Northern California’s Coloma-Lotus Valley. We’ve returned dozens of times to stay for weekends and weeks on end, during winter, spring, summer and fall. There are so many attractions in the area that just about anyone should find plenty of interesting options from which to choose.

Campers come by just to watch the action on the river. One of the many riverfront sites at Ponderosa RV Resort.

Several campgrounds are located near or on the banks of the river. Our favorite is Ponderosa RV Resort. Situated where historic Highway 49 crosses the South Fork, about halfway between the towns of Placerville and Auburn, it is central to just about everything of interest in the area.
So what are some of the factors that draw us, and so many others, back to the same place year after year?

Being able to set up on the bank of the river, with the front windows facing all of the action on and around the water, is certainly close to the top. Whether the preference is to be inside or out, you’ll be able to watch all that is happening. Evening options include enjoying peaceful solitude, or sitting with others around a nice campfire, the pleasant sound of the rushing river in the background. An added bonus on a recent trip was a blue moon rising over and reflecting upon the water just after dark. Apparently this second full moon of the month only occurs once about every two and a half years.

Our spot right on the riverfront affords numerous opportunities to view and photograph the action – and occasional craziness – exhibited by those coming down the river. Most are in kayaks, rafts or tubes. But we’ve also seen people traversing the rapids on pretty much anything that floats, including some that were walking or running on waterwheels (like hamster treadmills). This part of the river draws abundant wildlife, too. Deer, otters, ducks, geese and wild turkeys are frequently sighted. Occasionally bobcats, coyotes, osprey, bald eagles and mountain lions have been seen.

The author’s grandsons make their own fun on the river at the Ponderosa.

Bountiful wildflowers are in evidence much of the year. Those, combined with native riparian foliage in many shades of green, plus rolling hills dotted with pines, oak and scrub brush, offer a beautiful panorama year round. If the wind is right, paragliders of many colors contribute even more to the spectacular view.

Campers from throughout the resort come by walking their dogs, and even cats. Still others come just to watch and photo­graph the river. We’ve met people from all across the country. Impromptu social gatherings occur frequently, especially around cocktail hour. Of course there are plenty of other things to do at the resort; right behind the motorhomes parked along the riverfront, there is a nice bocce ball court. Horseshoe pits and a volleyball court are also located nearby.

We found it interesting that Native Americans made camp in this same area, maybe even enjoying a similar view of the river. There are several bedrock mortars or “grinding holes” in boulders overlooking the river, right in front of where we generally set up. These holes were

created over perhaps thousands of years as acorns were ground into meal and flour. Occasionally, arrowheads or other artifacts can be found, especially after heavy rains.

The river offers up decent trout for those who have the patience.

Running a close second to the outstanding layout and view overlooking the river is the resort’s central location to all the fun things to do in the area. In addition to the variety of recreational opportunities the river affords, there are many other attractions. Nearby Henningsen Lotus Park has a .42-mile concrete loop for walking or jogging, along with a six-station parcourse. You can walk there from the Ponderosa, taking advantage of a wonderful trail along the river in the process. For those seeking longer, more challenging hikes, there are several nearby trailheads that lead through many miles of scenic and varied terrain. Some of those are within walking distance of the Ponderosa. The nearby 1,414-acre Cronan Ranch Regional Trails Park offers several more miles of trails for hiking, biking and horseback riding, through foothills and along the river. And it is just a short drive away in Pilot Hill.

A replica of Sutter’s Mill was erected near the original site in Coloma.

There are other, much larger functions in the area, too. The Annual American River Festival is held in early September; the Coloma Gold Rush Live, complete with historic re-enactments is held in October; and Christmas in Coloma is held in December (Dec. 14-15 this year).
Before deciding where to go and what to do, we suggest you obtain free copies of the most recent Coloma-Lotus Guide, produced by the Coloma-Lotus Chamber of Commerce, and the El Dorado County Visitors and Farm Trails Guide. Both are generally available at the Ponderosa.
If not, Sierra Rizing Bakery, located across Highway 49, carries the guides as well. Open year-round from 6 a.m. to 2 p.m., it offers breakfast and lunch items, plus a wide variety of breads and pastries. There is also free Wi-Fi.

The Coloma-Lotus Guide includes a wealth of information about the rich history of the area, along with places to go and things to see. There is a humorous graphic representation of the river, along with the names and locations of the many rapids one can experience, such as Troublemaker, Widowmaker and Meat Grinder. The major white-water adventure trip providers operating in the valley are listed in the publication. For those who suffer from wanderlust, the guide also has detailed maps of the many trails that can be accessed for biking, hiking and horseback riding.

The El Dorado guide includes maps and information about the wineries in the area, plus local entertainment, dining and a variety of unusual attractions. If you’re seeking adventure in the form of backpacking through wilderness areas, four-wheeling, using ATVs and the like, review this publication.

Bedrock mortars in the boulders overlooking the American River at Ponderosa were created by Native Americans.

Naturally, the economy of the Coloma-Lotus Valley is very much tied to the river, primarily through white-water rafting and kayaking. The American River is known as the most commercially rafted river west of the Rockies. For those who yearn to experience the many Class II and III-plus rapids along the South Fork, there are two major segments. The Ponderosa RV Resort is about midway between them. The upper part begins at a place called Chili Bar. The lower part begins in the Ponderosa and Lotus Park areas, then terminates where the river goes into the upper end of Folsom Lake, near Salmon Falls Bridge. Having rafted and kayaked both the upper and lower portions, we can say there are challenges for all but the most experienced. And the scenery is nothing short of spectacular.

An additional convenience of staying at the Ponderosa is that Gold Rush Outfitters has contracted with the resort. Their facility is right on resort property. During the season (May through September), they offer discounted rafting trips on both the upper and lower parts of the river. The company also operates a general store and small restaurant on the property. Free Wi-Fi hotspots can be found at the store/restaurant and at the resort’s lodge.

Another option is to walk or drive the mile or so into the historic town of Coloma, now part of Marshall Gold Discovery Historic State Park. On Jan. 24, 1848, James W. Marshall discovered gold in the river at the site of a sawmill he was building for John Sutter. By 1849, word had spread far and wide. People came from around the world hoping to get rich and the California Gold Rush was born.

One of the many riverfront sites at Ponderosa RV Resort.

Roam through the town, museum and expansive park grounds to learn about the rich history of the area in general and the Gold Rush in particular. A replica of Sutter’s Mill was erected near the original site. Also on display are many examples of equipment developed for use with various mining techniques that proved more efficient than panning for gold. If you take the time to check out all of the historical markers, equipment, structures, museum and other items of interest scattered along the many trails in the park, you can easily spend the better part of a day.

Gold panning has again become a popular activity, particularly since gold generally fetches more than $1,000 an ounce on any given day. From the state park people can be seen panning along both sides of the river. Others can be seen trying their luck at the Ponderosa, especially where the rapids curve around the bend, near the north end of the property.

If panning for gold doesn’t sound like fun, you can always try searching for pieces of a meteorite that impacted in the Coloma-Lotus area on April 22, 2012. According to several news reports, collectors may be willing to pay up to $17,000 a gram, much more than the price of gold. If neither of those activities is of interest, there is always the chance to strike it rich at the Red Hawk Casino in Placerville. It is only about a 25-minute drive from the Ponderosa.

This wonderful valley surely won’t disappoint. And the locals are so laid back you can’t help but feel welcome. It is a destination that offers everything from peace and harmony to activities worthy of most adrenaline junkies. Of course, being able to camp right along the river is a big part of the experience. For us, it brings to mind the phrase, “life’s a beach.”

Ken Reid is a freelance writer and photographer who travels extensively with his wife, Gayle, in their Southwind motorhome. Ken is also a frequent contributor to various travel magazines.

Clowns entertain kids at Ponderosa RV Resort most weekends during
the season.