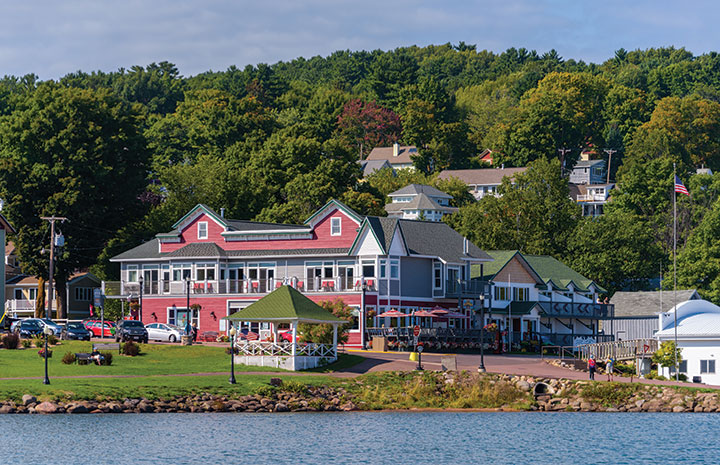 As summer came to an end, my husband, Mark, and I pointed our truck and fifth-wheel trailer from the mountain states east toward Lake Superior, but we found ourselves in lake country long before we reached the largest of the Great Lakes.

MINNESOTA
Driving through Minnesota on the Lake Country Scenic Byway (Highway 34), we were surrounded by waterways of all kinds. We had virtually thrown a dart at the map to decide where to spend a few nights, and luck was with us when it landed on Walker, an inviting lakefront town that was celebrating its annual Ethnic Fest when we arrived. We were soon swept up in the revelry.

The weekend began with a parade of locals descended from European and Native American ancestry, followed by streams of motorcyclists wearing jackets emblazoned with their families’ varied heritages. Several big floats carried musicians dressed in traditional attire and performing folk music, but it was the two women in Swiss garb playing enormous alpenhorns that really got our attention. After the parade ended, they wandered around the ethnic-food tents with their horns, stopping every so often to let onlookers listen to the mellow tones and see the unusual instruments.

Strolling the streets later, we noticed a pelican statue perched high above us on a rooftop and then passed a long row of colorful kayaks standing on end against a wall. This is very much a waterfront town, and Leech Lake, renowned for its walleye and muskie fishing, is just steps away. Down at the shore, we watched distant sailboats heeling in the breeze while anglers young and old stood at the water’s edge, casting their lines.

Behind them a car show was in full swing, and beautiful Corvettes glistened in the sun surrounded by admirers on the green lawn of the city park. One skilled woodworker showed off his homemade wooden car that sported a polished wooden exterior adorned with intricate carvings and inlaid images of eagles on the spare tire casing, as well as a beautifully crafted wooden interior. 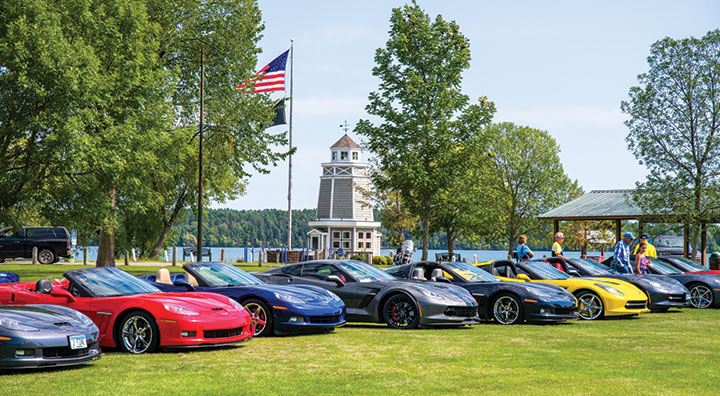 During the Ethnic Fest in Walker, Minnesota, a fun Corvette show took place on the shores of Leech Lake where rows of beautiful cars gleamed in the sun.

Two paved rails-to-trails paths crisscross the landscape in and around Walker, and the next morning we hopped on our bikes to ride on the Paul Bunyan State Trail. We quickly found ourselves a world away, deep in the woods with a canopy of trees arching over us. The trail intersected with the Heartland State Trail, and we realized we could ride for many miles to distant landmarks on a vast network of trails in this part of Minnesota.

Cyclists aren’t the only folks who love these trails, and we met tourists and townspeople alike on an evening walk.

WISCONSIN
Continuing east from Walker, we picked up Highway 13 in Wisconsin, eventually arriving at the southern shore of Lake Superior. The road clung to the coast, although the tree growth was so thick we couldn’t see the lake. Suddenly the views opened up as we came to the tiny village of Cornucopia and its small harbor. The water was clear and calm and mirrored the tall masts and colorful hulls of large sailing yachts tied to the docks.

A cluster of weathered buildings stood near the shore, housing art galleries and boutique gift shops. Crossing the highway on foot, we got a bite to eat at Ehlers General Store, but the tranquil beauty of the boats in the harbor drew us back to the lake where we watched kayakers paddling around in the serene water. Nearby, the decaying hulks of several antique commercial fishing boats rested on their sides in the grass. Their stories were told on plaques, and their legacy of Lake Superior adventures lingered mysteriously in the air about them.

Just a few minutes east of Cornucopia, we came to Meyers Beach, a jumping-off point for people taking their kayaks to the Mainland Ice Caves around the corner. This is an outpost of Apostle Islands National Seashore, and the ranger told us stories of previous winters when Lake Superior froze and people came in droves to walk out on the ice to get to the caves, which were filled with huge icicles. For now, though, despite autumn making its presence felt in the brisk late-September air, the lake was rippling with small waves, and kayaks of every color were coming and going between the beach and the caves. 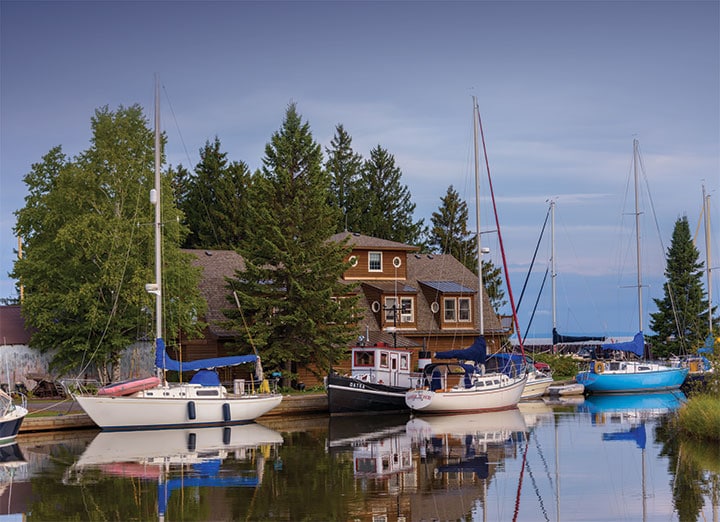 The tiny village of Cornucopia on Wisconsin’s Lake Superior shoreline has a sweet harbor filled with beautiful sailboats lined up at the docks.

The Apostle Islands lie off this coast, and we hoped to get a glimpse of them from Sand Bay, a detour up a peninsula from Highway 13. Although Little Sand Bay Campground looked appealing, it was very busy, so we retraced our route and kept going. Highway 13 ducked inland for a ways and then delivered us right to the edge of Lake Superior at Red Cliff where we found a wonderful restaurant, campground and marina perched on the edge of the lake at Legendary Waters Resort and Casino. Many of the campsites at the resort’s Buffalo Bay Campground are situated on a hillside overlooking the lake, and we enjoyed a tasty lunch at the casino restaurant.

Fall was definitely in the air now, as was the smell of ripening apples. When I noticed a bunch of fallen apples strewn around my feet on a walk, I looked up and saw the tree branches above me were loaded with perfectly ripe fruit. I grabbed one and bit into it. Oh, my, what a rush of flavor! it was the juiciest, sweetest and tartest apple I’d eaten in a long time. Picking a few more for the road, we went off in search of a nice sharp Wisconsin cheddar cheese to go with them. What a delicious treat and perfect food pairing.

We continued our drive along the lake’s south shore and soon came to the pretty town of Bayfield. Down at the marina, we chatted with folks on their boats about what it was like to sail on Lake Superior. Many of the sailboats were ocean-ready yachts, and some people lived aboard them part time as a weekend getaway. The nearby Apostle Islands were the favored cruising destination for these sailors, and the stories we heard about their adventures made us realize that despite the fresh water, sailing on Lake Superior was every bit as thrilling and treacherous as sailing on the open ocean.

Walking into town on a footpath that spliced the wide green lawns of Bayfield Civic League Memorial Park, we passed many joggers and people walking their dogs. Along the main streets we found coffee bistros, elegant lakeview restaurants and tourist boutiques aplenty. Bayfield is a boating and fishing haven, and the town is decorated with many motifs that celebrate these activities.

MICHIGAN
Continuing east into Michigan’s portion of Lake Superior’s south shore, we were just in time to see some spectacular crashing waves and colorful sunsets in the lakeside village of Ontonagon.

Many of the early settlers in Ontonagon immigrated from Cornwall, England, and they brought with them the recipe for the delicious meat-and-vegetable pies called pasties. Their Cornish forebears had taken these hearty handheld meat pies down into the English mines for a substantial midday meal. When we saw a sign advertising homemade pasties at Syl’s Café, we just had to stop in and get two to finish baking in our trailer’s oven that evening.

Miners Castle Overlook is one of the highlights of Pictured Rocks National Lakeshore with its sandstone cliffs on the south shore of chilly Lake Superior in Michigan. The vivid turquoise water makes it look like a tropical paradise!

But first we paid a visit to the beach at Township Park. The long sandy beach was strewn with downed trees and driftwood logs whose roots and limbs made natural sculptures on the sand. The sun began to set in stunning fashion, and we watched in awe as it sank into the lake on the far horizon. Just as the sun disappeared, the distant sky turned black and lightning flashed. We ran back to the truck and jumped inside just as rain began to pelt the beach. How fun it was to return home to our cozy trailer, pop the homemade pasties into the oven and then sink our teeth into the flaky crusts of those flavorful meat pies.

From Ontonagon we took a day trip 20 miles westward to scenic Lake of the Clouds in Porcupine Mountains Wilderness State Park. The short hike up to the viewing area was a wonderful hilly walk through the woods, and the two overlooks offered massive views of the lake surrounded by trees.

Following the contours of Lake Superior’s south shore, we drove the 100-mile detour northeast up to the town of Copper Harbor at the top of the Keweenaw Peninsula. This tiny town typically bustles with summer tourists, but things were pretty quiet during our visit in late September. As we explored the town and nearby Eagle Harbor Lighthouse, we had the place almost to ourselves. 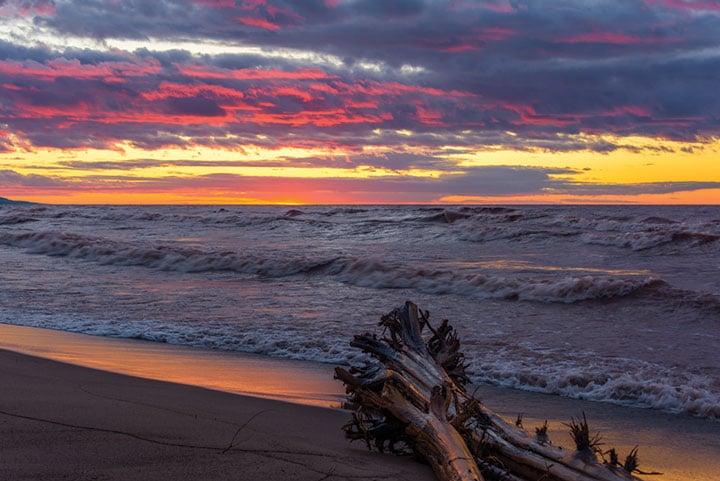 Crashing surf and vivid colors made for a gorgeous Lake Superior sunset in Ontonagon, Michigan.

Two hundred miles east, just beyond the town of Munising, Pictured Rocks National Lakeshore extends for 50 miles along the banks of Lake Superior. One of the most scenic spots on the national lakeshore is Miner Castle Overlook, which offers beautiful views of mineral-streaked sandstone cliffs in the distance. Lake Superior was a vivid turquoise below the cliffs, and if we hadn’t been wearing layers of clothing to ward off the brisk fall air, we might have thought we were in the tropics.

Wherever your RV takes you on Lake Superior’s south shore, you’ll find rugged beauty and wonderful beach towns, and there are plenty of great places to camp.

Where to Stay and Play