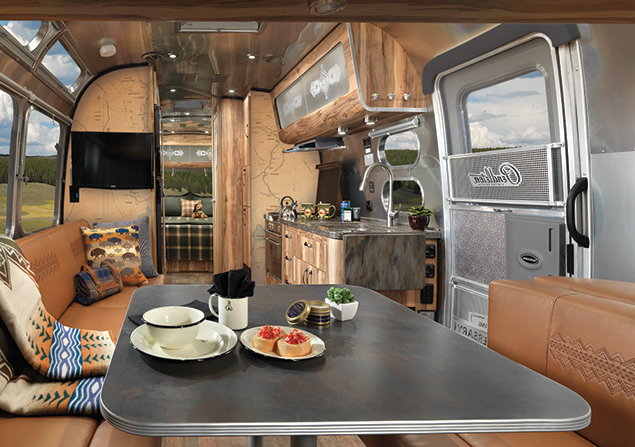 Two iconic American brands, Airstream and Pendleton, have partnered to create a limited-edition Airstream travel trailer to commemorate the National Park Service’s 100th anniversary this year. For each of the 100 trailers sold at retail, Airstream will donate $1,000 to the National Park Foundation, which will use the funds to support preservation projects at Grand Canyon and Glacier national parks.

“Airstream founder Wally Byam was an innovator and a lover of the outdoors who believed in an enduring promise of adventure, new experiences and faraway lands,” said Airstream CEO Bob Wheeler. “That same spirit is a cornerstone of the Pendleton brand, and together we are celebrating our national parks.”

The 28-foot Airstream has roomy living spaces and a rear sport hatch for easy loading and unloading of equipment such as bikes and kayaks. The trailer can sleep up to six people, and the queen-size bed comes with bedding from Pendleton Woolen Mills. Pendleton has also expanded the number of products in its National Park Collection, several of which are featured in the Airstream.

The 2016 Pendleton National Park Foundation Airstream has an MSRP of $114,600 and is available at Airstream dealers.