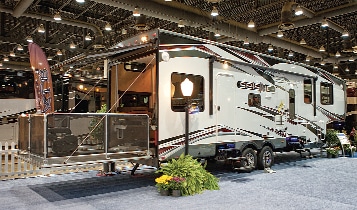 If the RV industry’s largest and most historic trade show is a sign of the times, it seems the future can be summed up in three words: lighter is better.

Toy haulers, along with smaller, more lightweight travel trailers and fifth-wheels intended to be towed by half-ton pickups – and some smaller SUVs, in the case of travel trailers – were prominent among the more than 1,000 RVs on display during the 49th Annual National RVIA Trade Show in Louisville, Kentucky.

“We’ve gone with lighter materials in the coach to take the weight down,” said Randy Graber, president of Open Range RV in Shipshewana, Indiana, which introduced the Light towable series at the annual Louisville Show. A 34-foot triple-slide Light floorplan, for instance, has a dry weight of 7,200 pounds.

Some toy hauler manufacturers have taken their units beyond just being functional as cargo carriers for motorcycles, four wheelers and other gear. The garage area in the Seismic fifth-wheel toy hauler from Jayco Inc., of Middlebury, Indiana, for instance, is climate-controlled and outfitted with espresso-finished wood cabinets and optional opposing sofas.

The Seismic has a more user-friendly living area that incorporates the garage and is four-season rated with an enclosed and heated underbelly.

“The idea was to have broader appeal with features and focus on the cargo area so that it is more like a flex room that can be used for anything,” said Troy James, Jayco product manager.

Andy Baer, vice president of sales and marketing for KZRV Inc., also based in Shipshewana, Indiana, said RV builders are cognizant of the impact more fuel-efficient tow vehicles are having on the RV lifestyle. At the show, KZ introduced a lightweight, hybrid Spree Escape travel trailer with three soft-sided tent extensions.

“As we get this new group of smaller tow vehicles, we’ve got to bring to market trailers that can be towed safely,” Baer said.

As for innovation, CrossRoads RV of Topeka, Indiana, reintroduced the mid-profile Sunset Trail fifth-wheel with the industry’s first slideout extending from the front cap over the hitch. The 36-inch extension allows for a north-south queen-bed layout and two built-in wardrobes.

Also debuting at the show was a prototype of the first all-electric Class C motorhome – the E Tahoe from MVP RV of Riverside, California. The company expects to introduce an electric-powered, albeit expensive, Class A motorhome in the United States later this year.

“It may be next year, it may be five years down the road, but batteries will get all of these gas guzzlers off the road,” said Scott Degnan, MVP vice president of sales and marketing.

Here are 14 top trailers that caught our collective attention in Louisville.

Belying its name, Born Free Motorcoach, of Humbolt, Iowa, has introduced the Trail-R Lodge, a 22-foot prototype travel trailer featuring many of the same characteristics of its high-end Class C motorhomes. “Our thoughts are to build a very high-quality trailer to compete in the market with other high-end models,” said Dennis Day, vice president of commercial sales for the Dodgen Industries subsidiary. Designed to be towed by half-ton pickups, the Trail-R Lodge prototype features a 6,150-pound dry weight. ‘‘We’ve already found a number of ways to cut weight out and bring that down further,’’ Day said. MSRP: $85,500.
Born Free Motorcoach, (800) 247-1835, www.bornfreemotorcoach.com.

Besides being stylish, Forest River’s new Aviator travel trailer is about as smart as an RV can be with the inclusion of a Sony tablet computer that replaces the remote control ordinarily used to operate a unit’s electronics. In addition to controlling the fireplace and three Sony LED TVs, the tablet provides owners with an interactive guide of how-to videos, tutorials, manuals, and care and maintenance guides. Features in the wood-free Aviator include an aerodynamic front cap with a large, integrated windshield, contoured composite sidewalls and a maintenance-free fiberglass roof. MSRP: Upper-$70,000s.
Forest River, (574) 389-4600, www.forestriverinc.com.

Jayco  has re-entered the toy hauler market with the Seismic fifth-wheel series with six full-profile and two mid-profile floorplans. The Seismic replaces the Indiana manufacturer’s Recon line, which was discontinued last year. Available in 28- to 41 1/2-foot lengths with up to three sliderooms, the Seismic has a more user-friendly living area that incorporates the garage and is four-season rated with an enclosed and heated underbelly. “It’s not just a garage with a metal utility cabinet,” said Troy James, Seismic product manager. Built on a drop-frame to provide more storage, a painted fiberglass cap is standard while a molded gel-coat cap is optional. MSRP: $45,000.
Jayco Inc., (574) 825-5861, www.jayco.com.

Architect Christopher C. Deam has an eye for the future in the Sterling Edition.

Noted architect Christopher C. Deam designed the interior of the new Airstream International Sterling Edition, a 27-foot concept travel trailer shown in Louisville by Airstream, of Jackson Center, Ohio. The modernistic Sterling, with anodized aluminum interior sidewalls accented by aluminum cabinets, LED lighting, white ultraleather furniture and striking fabric-look yellow vinyl floors, is the third Deam interior commissioned by Airstream in the past decade. “He has a take on Airstream that nobody in Jackson Center can conceive of,” said Airstream President Bob Wheeler. “He understands our processes and materials and we understand what he is after.” Should the Sterling Edition go into production, Wheeler said, other interior palettes will likely be offered. No MSRP has been established.
Airstream, (877) 596-6111, www.airstream.com.

The vacuum-bonded contoured fiberglass sidewalls and vaulted ceiling on the new Vantage travel trailer from Keystone RV See page 46) allow wide-body interior living space with the towabilty of an 8-foot-wide frame. Uniform window lines also give the Vantage a streamlined look. “This bucks the current style trends and that’s what we were after,” said Troy Nusbaum, Vantage product manager. Available initially in three single-slide 29- to 32-foot floorplans, a second bunkhouse model is coming later this year. With molded high-gloss front and rear caps, distinctive LED rear lighting gives the appearance of a motorized coach. Amenities include stainless steel appliances and LED lighting throughout. MSRP for the 32-foot quad-bunk floorplan: $37,000.
Keystone RV, (574) 535-2100, www.keystonerv.com.

The industry’s first all-electric motorhome – the Class C E Tahoe from California-based MVP RV Inc. – will hit the retail market later this year. The pre-production E Tahoe shown in Louisville was fitted with a drive train, charger and battery system developed by Balqon Corp. The E Tahoe has a range of 200 miles from a set of batteries installed along the undercarriage of the coach. MVP President Brad Williams said the E Tahoe will cost more than conventional Class C models but that no retail price has been established.
MVP RV, (951) 848-4288, www.mvprv.com.

Indiana-based Cruiser RV, known for its small, lightweight RVs, has gone in a different direction for the 2013 model year with the new mid-priced Enterra travel trailer series. With four 35-foot floorplans equipped with two or three lightweight slideouts, Enterra is designed with barrel roofs that provide a 6-foot-11-inch interior ceiling and amenities that include solid surface countertops, standard fireplace, entertainment center with 32-inch HDTVs and a two-tone painted front cap to give the coach a higher-end look. MSRP: $32,000.
Cruiser RV, (260) 562-3500, www.cruiserrv.com.

For 2012, Riverside Travel Trailers has introduced a double-slide, 36-foot drop-frame travel trailer floorplan (32LOFTRB) with a pair of stacked rear bedrooms – one for kids with 49-inch ceilings and an upper loft with a slideout that has 6 feet of headroom for adults. The wood-and-aluminum Riverside travel trailer floorplan features a larger front kitchen and larger living area because of the space saved by stacking the two bedrooms. “You’d have to have a 42-foot trailer to get all the stuff in it that you can by stacking the bedrooms,” said Riverside President Mark Gerber. MSRP: $29,000.
Riverside Travel Trailers,
(765) 472-3920, www.riversidetrailer.com.

Dutchman unveiled their first toy hauler RV, one that is still towable by smaller trucks.

Open Range RV has extended the pin box and contoured the front cap on the all-new Light fifth-wheel series, allowing a 90-degree turn while it’s being towed by a 5 1/2-foot shortbed pickup truck. The Light series is built with aluminum sidewalls bonded to composite SymaLITE. The Light lineup has two 29- and 34-foot travel trailer and three 30- to 34-foot fifth-wheel floorplans with dry weights from 5,435 to 7,940 pounds. Features include automotive-style windows, power awnings and interior hardwood cabinets. Base travel trailer MSRP, $27,000; fifth-wheel, $34,000.
Open Range RV, (260) 768-7771

With tow vehicles getting smaller, Indiana-based KZRV LP has introduced a diminutive hybrid version of its popular Spree Escape travel trailer. The 22-foot Spree Escape E20RBT floorplan has three tent extensions – one on each end and a third streetside. With a dry weight of 3,220 pounds, the E20RBT can be towed by most SUVs. The hybrid trailer is equipped with an air conditioner, two-burner cooktop, microwave, small refrigerator, dinette, shower and toilet, awning and tinted windows. MSRP: $15,000.
KZRV, (866) 472-5460, www.kz-rv.com.