Let There Be Light

We think it was serendipity. A chance conversation a few years ago at the cozy Rainbow’s End RV Park in Sequim, Washington, kindled a fascination with lighthouses and eventually spurred our recent trip around Washington’s Puget Sound region. The day after that dinner conversation, we hiked 11 miles round-trip to the New Dungeness Lighthouse near the end of a sand spit that pokes into the Strait of Juan de Fuca. Soon afterward we joined the nonprofit New Dungeness Light Station Association and served our first one-week tour as volunteer lighthouse keepers.

At the end of America’s longest sand spit, driftwood piles up on the beach at New Dungeness Light Station.

A few years later, after our third volunteer stint at New Dungeness, we launched a tour of 10 more Puget Sound lighthouses, setting off in our tow vehicle from an RV park in Sequim. The first, Point No Point Light, seemed a good place to start. Not only is it the oldest lighthouse on Puget Sound, it’s the headquarters of the U.S. Lighthouse Society, a national educational nonprofit that is a compelling voice for lighthouse preservation. The comical name is a bonus.
Dating from 1880, Point No Point is located near the small town of Hansville on the northern end of the Kitsap Peninsula. As at New Dungeness, the light continues to aid seafarers. Although an aerobeacon now serves as the navigational aid, the fourth-order Fresnel lens (see “What’s a Fresnel Lens” below), installed in 1915, remains in the lantern room. A vacation rental occupies half of the keeper’s residence, while the other half serves as the Lighthouse Society offices.
Vital to U.S. commerce since colonial times, the nation’s lighthouses have changed profoundly in the past half-century. In the 1960s technological advances led the Coast Guard to begin automating lighthouses and removing keepers. Without someone present, the buildings suffered deterioration and vandalism. The good news is that many were rescued from this fate — frequently by local volunteer organizations, sometimes in concert with state or local government, often with assistance from the U.S. Lighthouse Society.

Port Townsend’s Point Wilson Light marks the place where maritime traffic from the Pacific Ocean bound for Seattle, Tacoma and Bremerton makes a sweeping right turn. It’s a critical spot, and unlike Admiralty Head across Admiralty Inlet, Point Wilson still serves as an active navigational aid and remains Coast Guard property. Tours of the 1914 combination lighthouse and fog-signal building are offered on summer Saturday afternoons.
Departing Sequim with our trailer, we steered for Port Townsend, having reserved space onboard the 11 a.m. ferry to Coupeville and Fort Casey State Park. On a bluff above the main entrance to Puget Sound, we viewed the Spanish Revival-style Admiralty Head Lighthouse. It combines keeper’s quarters and a light tower with a connecting ground-floor portico. Entering service in 1903, it replaced a wooden 1861 version inconveniently located just where the Army chose to construct a gun emplacement in 1899.
Lingering over the view from a newly reconstructed lantern room, we inspected two beautiful fourth-order Fresnel lenses in the small museum and browsed the gift shop for souvenirs and reference material. Although owned by Washington State Parks, the lighthouse is staffed by docents who volunteer as tour guides, gift shop attendants and maintenance workers. 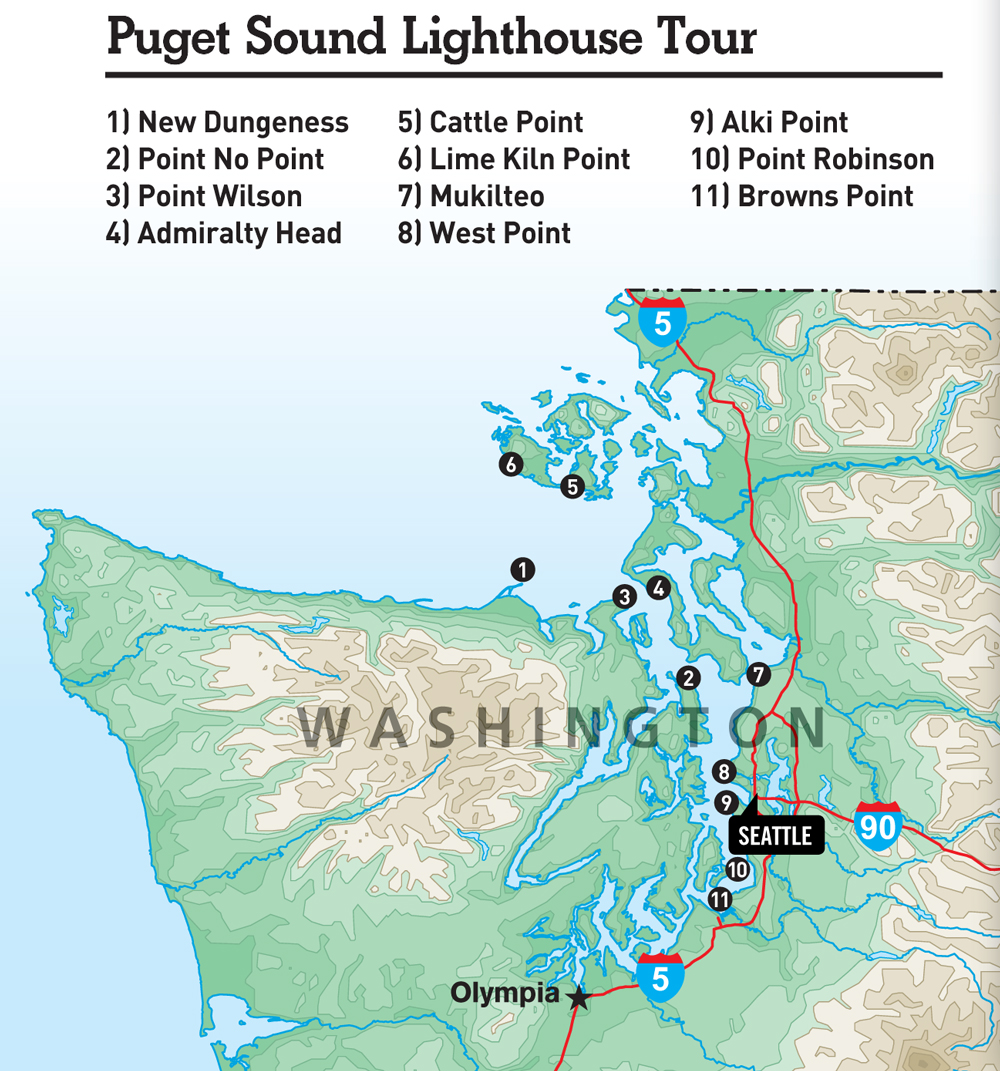 Visiting the San Juan Islands, home to four lighthouses, was essential in our quest to see as many Puget Sound lighthouses as we could manage. Leaving our trailer at Fidalgo Bay Resort in Anacortes, we negotiated the ferry with our tow vehicle. Onboard we enjoyed views of snug harbors, sandy beaches and forested hills, arriving an hour later in Friday Harbor.
The contrast between the two lighthouses on San Juan Island, the largest island in the San Juan archipelago, was startling. At the island’s southernmost tip, the 1935 Cattle Point Lighthouse appeared abandoned, boarded up, forelorn. An overgrown path leads about ¼ mile from Cattle Point Road to the lighthouse where the views are dramatic and so is the erosion around the building’s foundation. We hope that inclusion in the new San Juan Islands National Monument foreshadows future preservation efforts.
Lime Kiln Lighthouse faces British Columbia’s Vancouver Island across Haro Strait. Here in Lime Kiln Point State Park, we found an interpretive center, two well-maintained keeper’s quarters occupied by park personnel and the 1919 octagonal light tower and fog building.

The New Dungeness Lighthouse tower commands a sweeping view of the Strait of Juan de Fuca.

The light still serves as a navigational aid. The fog-signal room is seasonally occupied by Lime Kiln Acoustic Observatory researchers recording sounds of resident orcas. Alas, we saw no cetaceans at this spot renowned for whale observation. Volunteers operate the interpretive center and open the lighthouse tower two evenings a week during summer.
Time permitted us to wander through American and English Camps, two separate units of San Juan Island National Historical Park. Here we learned of an obscure mid-19th- century chapter in our history when sovereignty over the San Juan Islands was disputed between the United States and Great Britain.
Given most lighthouses’ limited open-to-the-public hours, we had several days for other sights and activities. We strolled Port Townsend’s Main Street and ogled its boat-packed harbor — especially the vintage wooden boats — and explored downtown Anacortes. We discovered the nearby communities of La Conner and tiny Edison with its memorable Breadfarm bakery and café, and walked Anacortes’ Tommy Thompson Trail.

The chance to nose around in a beautiful and vibrant city, not to mention five more lighthouses in Seattle’s vicinity, justified moving our trailer south from Anacortes.
The volunteer spirit, and its significance for the preservation and maintenance of lighthouses, is manifest at Mukilteo Light Station. Dating from 1906, its photogenic, wood-frame lighthouse and fog-signal building continue to serve as aids to navigation, employing its original fourth-order Fresnel lens with a range of 12 nautical miles. Now owned by the City of Mukilteo, the lighthouse stands in a park with two keeper’s dwellings. Mukilteo Historical Society volunteers serve as caretakers, operating a museum and gift shop, and giving lighthouse tours on summer weekends.
Seattle’s two lighthouses flank its harbor, Elliott Bay. West Point lighthouse began guiding vessels here in 1881, and Alki Point was first lit in 1913. Today, West Point is part of the city’s Discovery Park, while Alki Point is the only Puget Sound area lighthouse to remain an active Coast Guard station.

What’s a Fresnel Lens?                 Invented for lighthouse use by French physicist Augustin-Jean Fresnel in 1822, the Fresnel lens consists of precise crystal prisms that capture light from an illumination source (originally, a kerosene oil lamp) and produce a strong beam to pierce the darkness. Installed in North American and European lighthouses from the mid-1800s to the early 1900s, these lenses safely guided mariners. The largest size, called a first-order, is 12 feet tall and casts a beam 20 miles or more out to sea. Smaller lenses, generally fourth- through sixth-order, were used in harbors, bays and estuaries. Historic Fresnel lenses are on display at many Washington lighthouses, and some are still in use.

The Coast Guard continues to take excellent care of Alki Point — the district admiral resides in an original keeper’s dwelling. The Coast Guard Auxiliary conducts guided tours and opens a small museum one weekend each month. We enjoyed the fine display of fog-signaling equipment, a Fresnel lens and the view from the lantern room.
West Point Lighthouse, though restored, is not currently open to the public. No scheduled tours are offered. While roofs have been replaced on the two keepers’ dwellings, they are otherwise in a deteriorated state. It’s also a challenge to get there involving a 3-mile round-trip hike or, for seniors and the disabled, obtaining a parking pass from the visitor center.
Once again we relied on the ferries — this time completing a loop, sans trailer, from West Seattle to Vashon Island, then from Vashon Island to Tacoma, returning to Seattle via Browns Point — to visit two lighthouses south of Seattle.
Point Robinson on Maury Island (connected to Vashon) marks the halfway point on the water route between Seattle and Tacoma. A combination fog signal and lighthouse began operating in 1885 and continues as an active navigational aid. The Coast Guard maintains radar and radio-signal towers here but leases most of the property and buildings to the Vashon Parks District. We picnicked here but missed out on a tour — no one showed up to open the lighthouse. If you go, make sure to call ahead.

The authors’ travel trailer rides the ferry from Port Townsend to Whidbey Island.

The 1903 Browns Point Lighthouse sits about 6 miles southwest of Point Robinson, marking the northern approach into Commencement Bay, Tacoma’s harbor. The distinctive rec­tangular tower dates from 1934 and, while missing its lantern, still serves as a navigational aid.
The site includes a keeper’s cottage (a vacation rental), a museum and gift shop, a boathouse and an oil house. Now in a Tacoma city park, the lighthouse can be tricky to find — it’s not well marked. The Points Northeast Historical Society restored the keeper’s residence, operates the rental and conducts tours on Saturdays March through November.
Serving as keepers, of course, we know New Dungeness best. It’s one of the oldest lighthouses on the West Coast, dating from 1857. The 1904 head keeper’s dwelling provides modern accommodations for up to seven. Its relative isolation offers peace and quiet amidst a wildlife refuge full of aquatic birds and bald eagles. Conducting tours and performing maintenance chores is a unique opportunity to allow us to make a small contribution to the lighthouse’s preservation.

The 1903 keeper’s cottage at Tacoma’s Browns Point Light Station has been restored and updated with modern amenities.

New Dungeness is that rare lighthouse with the good fortune never to stand vacant. It has always been looked after. We marvel at the ingenuity and dedication of the volunteer organization that has kept it going since the Coast Guard pulled its last keeper 20 years ago. And we are grateful for that serendipitous conversation with fellow RVers who were so enthusiastic about their just-completed week at New Dungeness. They planted a seed that sprouted into a calling.

We’ll Leave the Light On

Many Puget Sound lighthouses are run by volunteers from local nonprofit organizations. Supporters, including traveling RVers, donate their time, money or both, and membership fees are usually affordable at $10 to $50 per year. This money is used to maintain the light stations, provide public access and more.

Admiralty Head Lighthouse on Whidbey Island employs volunteers as tour guides and gift shop staff, as well as for general maintenance. No experience is necessary.
www.admiraltyhead.wsu.edu

Tacoma’s Brown’s Point Lighthouse uses volunteers for occasional tasks and short- and long-term projects. For longer time commitments, volunteers take on committee or board responsibilities. The 1903 keeper’s cottage is rented out for short stays as a fundraiser.
www.pointsnortheast.org

New Dungeness Lighthouse in Sequim provides a unique experience for its members. Volunteers may serve one-week shifts living in the keeper’s quarters at the end of a 5½-mile sand spit. As keepers, they provide tower tours and complete maintenance chores — and pay a fee to do it. New members and donations are always welcome.
www.newdungenesslighthouse.com

Point No Point Lighthouse members conduct lighthouse tours, manage the museum store and more on the northern end of the Kitsap Peninsula. The old keeper’s house is a vacation rental, and all proceeds benefit the lighthouse property.
www.pnplighthouse.com

The following websites can be a big help in planning lighthouse trips throughout Washington’s Puget Sound region and beyond: