Las Vegas: Beyond the Glitz and Glamour 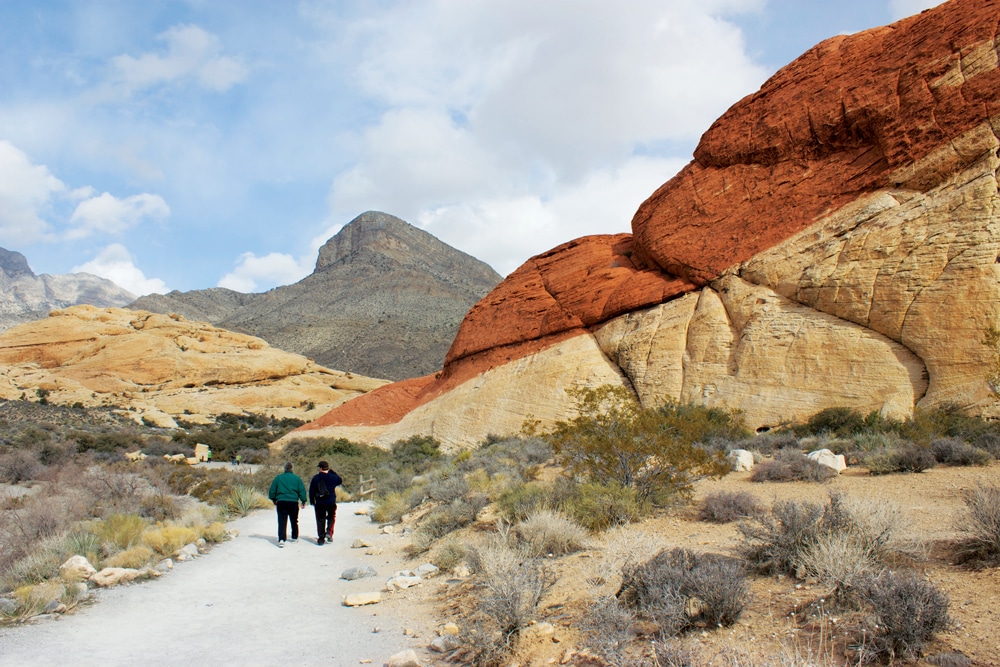 The Las Vegas Strip draws visitors from all over the world with its gambling, glitz and glamour. However, I wanted to see what lies beyond the slot machines and poker tables, since I’ve never been much of a gambler. The only payoff I’ve received from gambling is being able to indulge in a short-lived fantasy of philanthropy when I plunk down $2 on a large Powerball jackpot.

The Merriam-Webster Dictionary defines fantasy as “the free play of creative imagination,” and there’s plenty of that in Las Vegas’ hotels and entertainment. Creativity abounds in everything from Bellagio’s fountains to Cirque du Soleil’s eight shows. My husband, Jim, and I joined the throngs of tourists checking out the attractions on the Strip.

Our first stop was the Bellagio Hotel, which has three must-see, free attractions: the Fountains of Bellagio, Fiori di Como, and the Conservatory and Botanical Gardens. The 8-acre lake in front of the hotel features the Fountains of Bellagio, a dancing water extravaganza synchronized to music and light. Crowds gather to see one-song shows that take place every 30 minutes in the afternoon and early evening, and every 15 minutes from 7 p.m. to midnight. More than 1,200 nozzles are used, some shooting water blasts as high as 460 feet into the air. We were mesmerized as we watched streams of water sway and spray to Celine Dion’s “My Heart Will Go On.”

When the song ended, we followed our hearts to the Bellagio lobby. Our eyes were drawn to the extraordinary chandelier in the lobby created by world-renowned glass sculptor Dale Chihuly. Fiori di Como, which means “flowers of Como,” contains 2,000 hand-blown glass blossoms. The brilliantly colored sculpture, inspired by the flowers at Lake Como in Italy, fills a 70-by-30-by-12-foot ceiling coffer.

After snapping a few photos, just like all the other tourists, we entered the Conservatory and Botanical Gardens behind the lobby. Open year-round, it has five seasonal themes including the holidays, Chinese New Year, spring, summer and fall. Plants, flowers and trees are artfully arranged to complement the time of year. We were delighted by the Chinese New Year exhibit with six larger-than-life mannequins of children whose clothes were fashioned from 1,800 carnations, mums and roses, and an 18-foot-tall money tree symbolizing prosperity.

Next, we strolled down the Strip. At the Fashion Show Mall, we found Tix4Tonight, a half-price ticket booth. We had decided which shows and attractions we wanted to see, but didn’t have tickets yet. The discounted prices allowed us to stretch our entertainment dollars. Since we were able to get next-day tickets for Cirque du Soleil’s “Love,” we made plans accordingly. We also bought tickets for The CSI Experience, the Mob Museum and other attractions on our agenda.

Since CSI is one of our favorite TV shows, we decided to check out the CSI Experience at the MGM Grand. We got to play the role of crime scene investigators at this interactive attraction. Upon entering, we were assigned to investigate one of three murders. After inspecting the crime scene, we studied text messages, fingerprints, tire tracks, DNA, drugs and bugs in various lab stations. Our test results, and the medical examiner report, helped us narrow down the list of suspects. Just like on TV, we identified the killer in about an hour.

The highlight of our time in Las Vegas was seeing Cirque du Soleil’s “Love,” a celebration of the musical legacy of the Beatles. Just as in any Cirque du Soleil performance, there were talented gymnasts and dancers, colorful costumes and memorable characters. Seeing all this put to Beatles music left me gasping – literally – with awe. The graceful movement of the costumes in “Octopus’ Garden” made me feel like I really was “under the sea, in an octopus’ garden in the shade.” The theater at The Mirage Hotel was built specifically for this show, with speakers in every seat. Even though we bought our tickets the day before, we lucked out with sixth-row seats.

The next morning we were ready to enjoy the great outdoors. The Red Rock Canyon National Conservation Area is located 17 miles west of the Las Vegas Strip. It features a visitor center, a one-way 13-mile scenic drive and more than 30 miles of hiking trails. Discovery Plaza, an open-air exhibit at the Visitor Center, details how the elemental forces of earth, fire, air and water have shaped the landscape over 600 million years. We learned about this desert canyon’s geology and its early inhabitants, from dinosaurs to native people, explorers, ranchers and miners. Hoping to spot some of the fauna and flora described in the printed guide, we drove along the scenic road, stopping often at trailheads. While hiking, we saw red-tail hawks and cactus wrens, along with several other birds.

Two downtown attractions were on our to-do list: the Mob Museum and the Fremont Street Experience. The Mob Museum, the National Museum of Organized Crime and Law Enforcement, showcases the notorious battle between opposite sides of the law. It is located in a former federal courthouse, one of 14 in the nation that held Kefauver Committee hearings to expose organized crime in 1950-51. These hearings, televised live just as many Americans were buying their first TVs, made Tennessee Senator Estes Kefauver famous. The courtroom was restored to its original 1933 beauty as part of a $42 million construction project. The museum houses many one-of-a-kind artifacts, including the brick wall from the St. Valentine’s Day Massacre in Chicago, and interactive exhibits, such as the one that allowed us to listen to real FBI surveillance tapes on wiretapping equipment. These stories bring to life the roles of law enforcement and the Mob in Las Vegas and the world.

Just a short distance from the Mob Museum is the Fremont Street Experience. The city’s first hotels and casinos were built on Fremont Street in 1905. Many of those businesses still exist today in what has become a five-block-long pedestrian mall. It is covered by a barrel vault canopy called “The Space Frame,” which is 90 feet high at the peak and 1,500 feet in length. Imagine an overhead TV screen with more than 12 million synchronized LEDs. That is the venue for the Viva Vision! light and sound presentations. A different show runs every hour on the hour from dusk to midnight and features music from artists such as Queen, Bon Jovi and The Doors. While waiting for the next show to begin, we watched street performers and artists.

A great way to start a new day is by touring the Springs Preserve, which sits on 180 acres and includes colorful botanical gardens, museum galleries, walking trails and animal shows. We took our seats in the center of the indoor theater in the Origen Museum before the start of “Wings Over the Springs,” a seasonal show that features birds of prey in free-flight presentations. Little did we know that we were directly under the flight path of these birds. We could feel the force of their wings as they flew inches above our heads.

The entire Springs Preserve campus is a great example of sustainable living. Exhibits focus on clean energy, recycling, green building practices and water-smart landscaping. The Preserve is owned by the Las Vegas Valley Water District. Of course, water is a valuable commodity in the desert. The Preserve is built around a spring that was the original water source for Las Vegas. After watching a film about Hoover Dam entitled “Dam, This is a Lot of Work,” we added a visit to the dam to our next day’s itinerary.

Hoover Dam, a concrete dam on the border between Arizona and Nevada, was built during the Great Depression. When the plans were drawn in the 1920s, many engineers said it would be physically impossible to build. Yet, in 1935, 21,000 workers achieved the unachievable. Before the dam could be built, four tunnels were driven through the canyon walls to divert the Colorado River away from the construction site. Considered an engineering marvel in its time, Hoover Dam remains just as impressive today. In 1999, the Construction Industry Manufacturers Association named it one of the Top 10 Construction Achievements of the 20th Century.

Two guided tours are offered at Hoover Dam. We opted for the 30-minute Power Plant Tour since the 1-hour Dam Tour was sold out. We saw the power plant and visitor center, but missed out on the passageways within the dam itself. The 17 main turbines have a capacity of 2080 megawatts and generate an annual average of 4.2 billion megawatt hours of energy that is distributed to customers in Arizona, Nevada and California.

Lake Mead was created when Hoover Dam backed up the waters of the Colorado River. It’s the largest reservoir in the U.S. when at maximum water capacity, and a popular destination for outdoor enthusiasts. More than 9 million visitors come each year for boating, fishing, water skiing, swimming, kayaking, camping, hiking and other outdoor pursuits. Four campgrounds provide RV sites with full hookups.

Our last day in Las Vegas happened to be opening day of the new sporting clay courses at the Clark County Shooting Complex. Steve Carmichael, Park Supervisor and member of the Trapshooting Hall of Fame, was kind enough to give us a tour and a short lesson. With his patient guidance, I actually hit a few of the targets. The new course takes shooters to 30 stations across 75 desert acres in a sport also known as “golfing with guns.” Shooters ride from station to station in a golf cart outfitted with shotgun racks.

The complex has rifle, pistol, shotgun and archery ranges, and 80 RV sites with full hookups. A separate work-camper area with covered RV sites is for volunteers who work 15 hours a week in exchange for a free site. Carmichael credits these folks for keeping the complex clean and ensuring its 5-star image.

When we got home and compared notes with friends who had also recently vacationed in Vegas, they were astonished that we hadn’t gambled. They had paid for their entire trip – including airfare and hotel – with their winnings. I was equally shocked that they hadn’t seen a single show or attraction. We agreed to go back together. We’ll see Cirque du Soleil’s newest show about Michael Jackson, “One.” And I promised to spend $20 at a slot machine, just to have the complete Vegas experience.