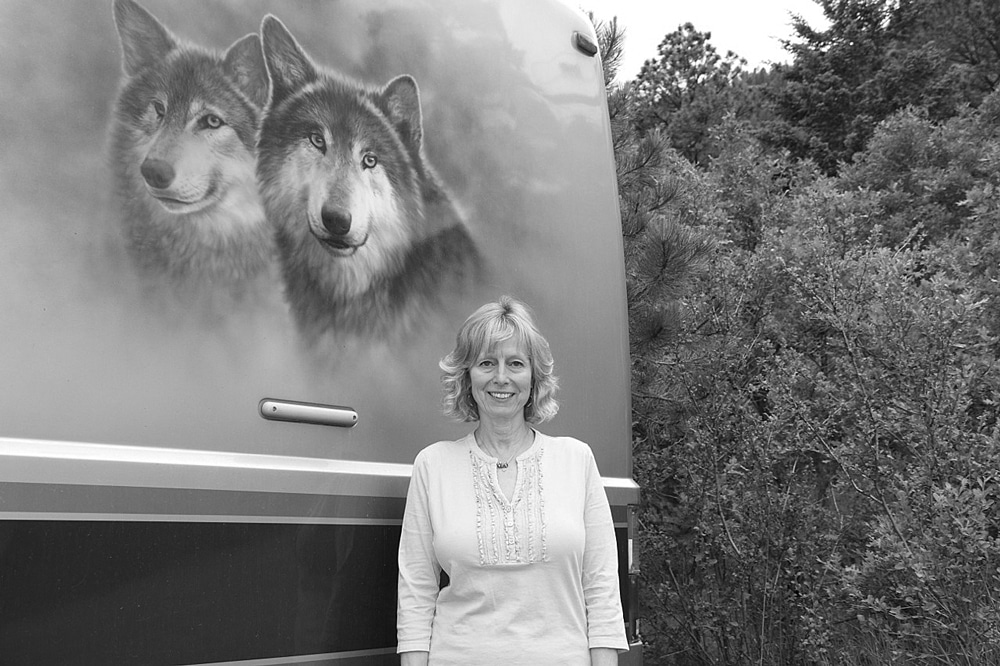 In addition to outdoor activities – mountain biking, boating, fishing, golfing and hiking – this town is home to an English Village and historic London Bridge

A sign on the outskirts of Lake Havasu City invites visitors to “Play Like You Mean It.” My husband, Jim, and I accepted that as a challenge

to see how much outdoor fun we could squeeze into our five-day visit.

In addition to hiking and biking trails, the 1,100-acre SARA Park features an area to fly model airplanes, a raceway, a shooting range, and baseball and softball fields.

We weren’t the only ones who were spending time in “Arizona’s Playground” in the winter of 2014. With the nasty weather in much of the U.S., Lake Havasu City was an attractive destination. So attractive, in fact, that when I called to make reservations a few days prior to our arrival, I had to call five RV parks before I found one with a single vacancy for our short motorhome. If you plan to go in the high season, make your reservations early.
I imagine many of the city’s 750,000-plus annual visitors start their vacations the same way we did with a stop at London Bridge. This bridge spanned the Thames River in London, England, from 1831 until it was dismantled in 1967. Robert P. McCulloch, chainsaw entrepreneur and founder of Lake Havasu City, bought the bridge at auction from the City of London for $2,460,000, outbidding several others including comedian Red Skelton and some Saudi Arabian princes. McCulloch hoped the world’s largest antique would attract prospective land buyers and tourists to the developing city. Before the bridge was disassembled, the exterior stones were carefully numbered. The granite blocks were shipped through the Panama Canal to California, then trucked to Lake Havasu City. Reconstruction was completed over a span of three years for an additional $5.1 million. On Oct. 10, 1971, the lord mayor of London, numerous Arizona and British officials, and 50,000 spectators were on hand for the dedication of the rebuilt bridge. The bridge is now Arizona’s second most popular tourist attraction next to the Grand Canyon.
London Bridge comes with stories to tell. Strafing marks in the granite blocks are the results of shots fired from a German fighter plane during the 1940 Battle of Britain. Lamps on the bridge are made from melted-down cannons of Napoleon Bonaparte’s army. The bridge is rumored to be haunted; reported sightings include a British police bobby patrolling the bridge, and a woman in black. We saw the battle scars and the historic lamps, but didn’t spot either ghost.

The English Village adjacent to the bridge sits on an acre that was donated back to the city of London by McCulloch. The village welcomes tourists with an elaborate wrought-iron gate built in 1862 in Worcestershire, England, a pair of silver city of London dragons and a fountain with four Trafalgar Square-type lions. After admiring the English memorabilia, we stopped at the visitor center to plan our activities in the Arizona desert.
We asked about mountain biking and were directed to SARA (Special Activities and Recreation Area) Park. In addition to hiking and biking trails, the 1,100-acre park 5 miles south of town features an area to fly model airplanes, a raceway, a shooting range, and baseball and softball fields. From a parking lot in SARA Park, we set off on the Crack in the Mountain Trail, not following a map or watching trail markers, and eventually ended up wondering which way to go in a sandy wash in a narrow canyon. Jim commented that we might travel faster without our bikes. A friendly hiker asked if this was our first time here. After we confirmed that it was, she said, “I thought so. Most bikers follow the blue trail over that ridge.” That’s when we noticed our yellow trail markers. We switched to the blue trail. Even that trail was challenging, but it rewarded us with a magnificent view of Balanced Rock Cove and its clear, turquoise waters.
Back at the parking lot, I noticed all the cars with bike racks were parked in a different lot on the east side of the street. We drove over there and talked to two men unloading their bikes. They said the trails east of the Crack in the Mountain are more popular for biking. While we thoroughly enjoyed our ride, next time we will either bring hiking poles to negotiate sandy wash and the series of dry falls through the Crack, or ride bikes on the east trails.
The next day we got an early morning tee time at London Bridge Golf Club. It was the first golf course built in the city. With mountains in the background and palm trees dotting the course, it’s a picturesque place to enjoy the game. A lovely couple from North Dakota joined us to make a foursome. We occasionally paused to watch hot-air balloons floating above us and a hungry coyote stalking the ducks in the pond. After we finished 18 holes, we had a tasty lunch in the clubhouse.
Since Lake Havasu, a reservoir on the Colorado River, is one of the reasons the area is so popular with tourists, we wanted to get out on the water. During our visit the water was too cold for me to try stand-up paddleboarding for the first time, even though there were a few brave souls on the water making it look like fun. Instead we opted for kayaking. I called WACKO (Western Arizona Canoe and Kayak Outfitters) to book the Castle Rock Mesquite Bay paddle trip. The owner offered to pick us up at the RV park, but it was just as easy for us to go to his shop. He left us on the shore of Castle Rock Bay with a few words of wisdom about the best wildlife viewing, and told us to call when we were ready to be picked up. We paddled near the California side of the reservoir, spying plenty of waterfowl and a lone coyote along the way. A local fisherman told us the fishing was good year-round. He often catches his limit of bass, catfish and trout.

Another way we wanted to experience the lake was through one of the narrated boat tours. We looked over the options and hoped to do the Sunset Charter and Tour Company’s Lighthouse Tour. Since that two-hour tour was already booked with people who were better at planning ahead, we instead went on the Sunset Charter’s Copper Canyon Tour. We boarded the Canyon Cruiser Kon Tiki on a waterfront dock near London Bridge. Since we passed several lighthouses en route, our captain told us the interesting history of Lake Havasu’s lighthouses. Just as you wouldn’t expect to find London Bridge in the Arizona desert, you wouldn’t expect to find more lighthouses here than in any other U.S. city. All but one of them are one-third-scale replicas of famous lighthouses on the East and West coasts, and the Great Lakes. The Lake Havasu Lighthouse Club built these functional navigational beacons to ensure safety for night boating and fishing. The first lighthouse was built in 2000. There are currently 24 in strategic locations around the lake, with plans for 16 more. All materials and labor are donated for this worthy cause.
On the day our tour took us to Copper Canyon, the site of a copper mine during the late 1800s, it was calm and peaceful. Just a few other boats floated in the area. When 15,000 to 20,000 college students arrive for spring break in March and April, it’s party central. Boats pack into the cove so tightly that people can sometimes walk from one shore to the other across the decks of boats. After spring break or busy holiday weekends, it becomes a popular spot to scuba dive. Divers often find various items lost by boaters. A friend of our captain reported finding a Rolex watch valued at $10,000.
We drove through Bill Williams River National Wildlife Refuge on our way to Lake Havasu City and vowed to spend some time there before we left the area. The river that flows through the area was named after Bill Williams, a mountain man who explored Arizona in the early 1800s. Just 23 miles south of the city, the 6,105-acre refuge seemed like the perfect place to spend our last afternoon. After picking up a brochure about the Peninsula and Delta Nature Trails at the visitor center, we walked to the end of the peninsula and caught glimpses of the great blue herons nesting on nearby Heron Island. Open waters around the small island provide natural protection from predators.

From several fishing structures on the peninsula, anglers can cast their lines for striped, largemouth and smallmouth bass, bluegill and catfish. Boating is permitted at no-wake speed. Both Lake Havasu and Bill Williams River are popular Arizona fishing destinations.
On the Delta Trail, numbered information markers corresponded to notes in the brochure about native and introduced plants, a pond used as a grow-out facility for two species of endangered fish, and paths used by beavers and other animals. We looked down upon the Bill Williams Delta Marsh, which provides a riparian habitat for resident and migratory birds. A canoe trail starts below the visitor center and winds through the river delta for about 2½ miles one way. Canoes and kayaks cannot be rented at the refuge, but WACKO will provide a round-trip shuttle.

Lake Havasu City’s tagline is “Play Like You Mean It.” For us, it was good advice that we took to heart.