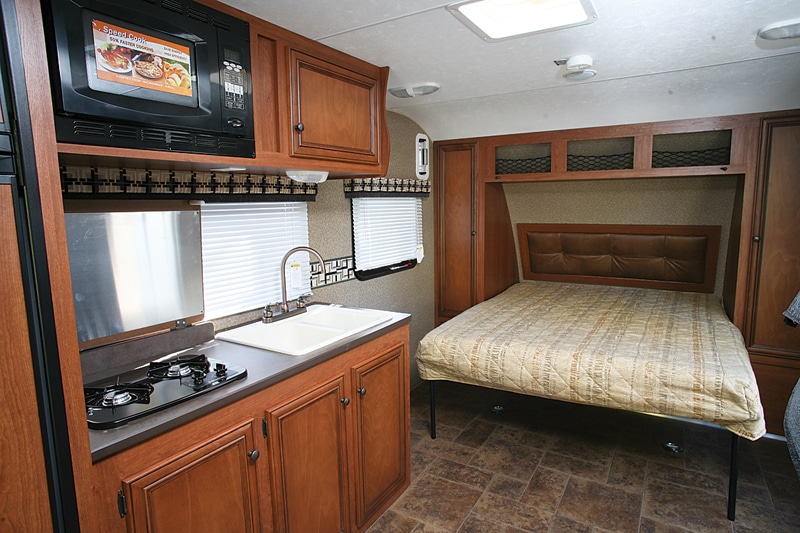 SURVs are certainly nothing new in the RV market; they have become more prominent over the last decade, providing off-road enthusiasts the best of both worlds by allowing them to spend the day exploring rugged terrain on an ATV, dirt bike or snowmobile, while still enabling them to sleep off the ground when the sun goes down. However, the majority of SURVs are quite large, and require heavy-duty pickups to tow, thereby causing prospective buyers to either upsize their vehicle or to look elsewhere to pursue their outdoor interests. Recognizing this need for a lightweight SURV that’s towable by many half-ton vehicles, KZ has rolled out the 2012 MXT 20, which boasts an unloaded vehicle weight (UVW) just north of 4,000 pounds.

KZ’s construction utilizes wood rafters, 5/8-inch plywood decking, aluminum-laminated side and front walls and a fiberglass exterior to help keep the weight low and offer protection from the pounding these trailers can take while adventurous families enjoy their favorite off-pavement endeavors. All new KZ trailers come with a one-year roadside assistance program.

The interior of the MXT belies the trailer’s primary usage — this isn’t an overly luxurious floorplan with posh appointments. No, the MXT is designed with off-roaders in mind, clearly focusing on function over form. When set up for indoor activity, there are two beds and a convertible dinette, plus the lav in the rear and a small kitchen area. That’s it. The Murphy bed up front folds up into the wall when in transit (a wardrobe is situated on each side of the bed). The rear bed also folds up, though it is secured in travel mode using a heavy-duty snap strap. The dinette consists of two separate flip-up seats that store similarly to the rear bed. The table can be stored in the front pass-through storage area.

The cavernous rear door makes hauling just about any ATV an easy job.

Though this layout may seem Spartan, it’s a great setup for off-road enthusiasts. After a long day at the dunes or on the mountain, a comfortable, climate-controlled environment with amenities is just what the doctor ordered. But this isn’t merely a wooden box with four walls; the attractive Ming décor and Legacy Cherry cabinetry offer a sense of residential comfort. And KZ makes sure owners aren’t left wanting. A 6-cubic-foot refrigerator and a microwave-convection oven to handle food prep are part of the package, but there is virtually no counter space (save for a nifty flip-down cover for the two-burner stove), which means meals will likely be of the short-order variety. The lav area, though cramped, is roomy enough to get the job done and offers a place to wash off dirt and grime that the exterior spray station may have missed.

The front and rear beds in the MXT won’t win any awards for extreme comfort, but out of necessity the thin mattresses fold up for storage. Its flip-down seating for the dinette offers a smaller sleeping area, and the cushions are just fine, exactly as we have encountered in other RV dinettes. In all, KZ has done a great job offering up to six sleeping areas in a shorter trailer whose primary function is to haul motorized toys. Not bad.

Once stopped, the KZ MXT 20 has plenty of room to relax.

Our test unit was equipped with an AM/FM/CD stereo, and also included the exterior speaker option ($90). There’s no TV in the MXT 20, though there is a spot for one near the front sleeping area should you wish to add it. OK, enough about the living; the diminutive MXT really shines when it comes to toy hauling. The trailer offers six tie-downs to accommodate outdoor toys, and the 51-by-75-inch rear curbside ramp rated at 2,500 pounds makes it easy to load and unload vehicles. Of course, owners need to heed both the tow rating of their tow vehicle and the nearly 2,900-pound cargo carrying capacity of the MXT when deciding which toys to bring along.

Converting the MXT from living quarters to toy hauler is a rather simple affair, and can easily be done by one person in a couple of minutes. Once I became accustomed to the seats and beds, folding them both up was a snap.

In all, the MXT 20 makes for a great extended-weekend toy hauler. KZ has ensured that there is enough storage space and fluid capacity to accommodate a family for several days, and the ease of converting the MXT 20 into a six-person sleeper is more than reason enough to consider purchasing the trailer. If you have a small family — or even just a group of buddies who like to indulge in outdoor adventure — the KZ MXT is a solid choice given its practicality and light weight.

Find the KZ MXT 20 and thousands of other motorhomes for sale at the online RV Buyer’s guide.