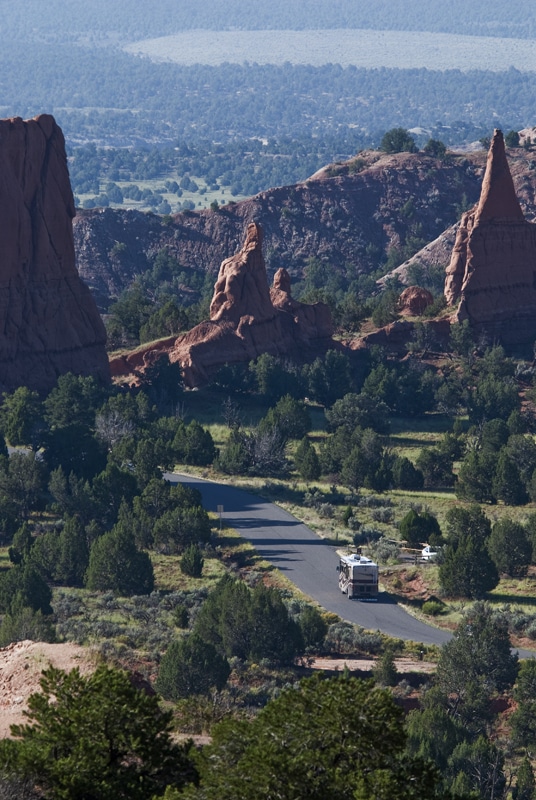 Mention Utah and most people think of destinations like Bryce Canyon and Zion national parks. No doubt these places are worth a visit, but there’s also a brilliant treasure to the east of those well-known attractions, a 2,241-acre gem named Kodachrome Basin State Park.

There are plenty of things to love about colorful Kodachrome. It’s a special place with an idyllic campground set amid lofty sandstone spires and red-tinged cliffs. The many hiking and biking trails make it ideal for outdoor enthusiasts like me, and if you enjoy the solitude of long desert drives, then this is the place for you, too.

My husband, Mike, and I spent a few days at Kodachrome Basin, reliving memories of our previous trips to the area and finding new routes to hike. We thought we’d traversed all the trails in the park, but this time discovered Big Bear Geyser/Cool Cave Loop, an offshoot of the popular Panorama Trail that boasts sweeping views and leads to the aptly named Cool Cave geologic feature.

With its spectacular color and contrast, Kodachrome Basin is a photographer’s delight, adorned with sandstone chimneys and unique petrified springs called sand pipes. It was this color and contrast of the landscape against the blue sky that prompted the National Geographic Society in 1949 to get consent from Kodak Film Corp. to name the park after its iconic film. Kodachrome was designated a state park in 1963.

There are nearly 70 monolithic spires in the park, ranging in height from 6 to 170 feet. The beautiful, natural towers seen today began life more than 180 million years ago. Located on the Colorado Plateau, a region that covers much of the Four Corners area of Utah, Colorado, Arizona and New Mexico, exposed formations range from the middle Jurassic Period (180 million years ago) to the Cretaceous Period (95 million years ago).

The most notable features in the park are these large columns of sedimentary rock that reach into the heavens from the basin floor. Sixty-seven colossal pipes have been identified in the park and nearby areas. No one knows for sure how the pipes were formed – there are only theories. Some geologists think earthquakes, coarse sediments and erosion formed the pipes. Others believe remnants of ancient springs or geysers became choked with sediments, which eventually cemented together. A newer theory suggests water-saturated pockets were forced upward by pressure from overlying sediments, creating a wet slurry that later hardened and was exposed by erosion. Regardless of how these pipes were formed, the only thing that really matters is that you visit and enjoy their beauty.

Plants and wildlife are also abundant. Classified as semi-desert in the upper Sonoran life zone, Kodachrome Basin is located at an elevation of 5,800 feet. Plants are hardy in this part of the country, adapted to drought conditions and extreme temperatures. You’ll see pinyon pine, Utah juniper, yucca, Mormon tea, big sage, and many other plants and grasses. When hiking look for the flowers of yellow flax, Indian paintbrush and evening primrose, to name a few.

When you visit be sure to hike Angel’s Palace Trail. One of my absolute favorites, the trail climbs a mere 150 feet above the basin floor, yet it provides magnificent views of the area. Look west and you’ll see the beautiful pinkish orange cliffs that belong to Bryce Canyon. Gaze about and be amazed by the scenes that are Kodachrome Basin and Grand Staircase-Escalante National Monument. Spend plenty of time exploring this 1.5-mile trail. If you want to learn more, be sure to hike the half-mile Nature Trail. Informational panels introduce visitors to the geology, animals and plants in the area. 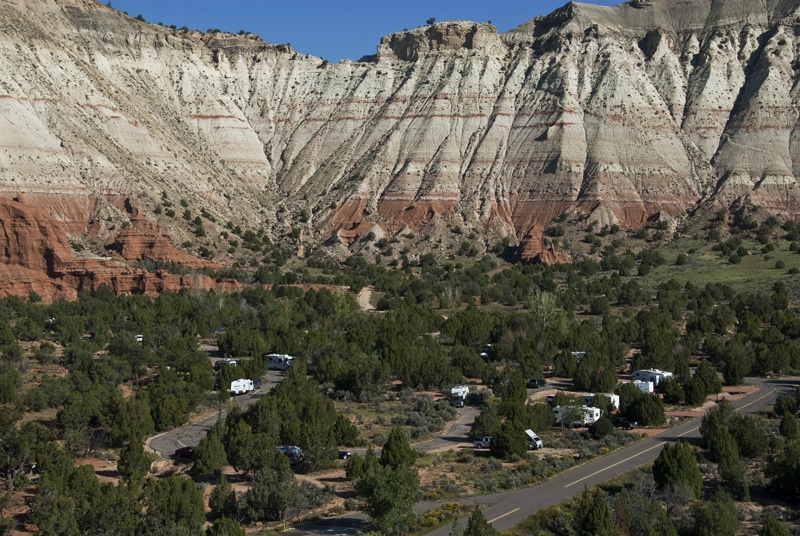 If you have more time, hike the 1.7-mile loop trail to Shakespeare Arch and Sentinel Spire. Shakespeare Arch is the only large natural arch in the park and is a must-photograph late in the afternoon. If you don’t have time to hike the entire loop I suggest hiking to the arch, which is only a half-mile one way.

The Grand Parade Trail is open to hikers, but it is also open to mountain bikers and horses. Mike and I biked the trail, but we had to walk at times thanks to heavy rains in the days prior to our visit. The 1.5-mile trail stays on the basin floor and is a good place to explore the two box canyons. You’ll have to do so on foot, however, as horses and bikes are not allowed in the box canyons.

An up-close look at Cool Cave on the Panorama Trail.

Although we’ve visited in the past, neither one of us could remember hiking the Panorama Trail. We headed out on the six-mile loop in a clockwise direction, first hiking to Panorama Point. The view from the top showed off the park’s rugged landscape. Next we traveled past enormous spires to Cool Cave. More a slot canyon than a true cave, the view upward showed slices of blue sky carved by the rocky vertical walls. We passed some other fun sites, including the Ballerina Slipper spire, and lastly, we were in awe of “the hands.” Though no one knows if ancient inhabitants or more recent ones made these handprints on the walls of what’s known as “Indian Cave,” the sandstone prints are certainly unique.

If you’d rather not hike the Panorama Trail you can bike it, or if biking is not your thing you can visit on horseback. Check out Red Canyon Trail Rides (800-892-7923) for more information regarding one- and two-hour rides.

No matter your mode of transportation, it’s important to stay on the trail, especially in this part of the country, where cryptobiotic crust is so important. This crust is a community of organisms that thrives on desert soils, its nutrients helping prevent erosion. Notice the soil when it is mature and you’ll see a lumpy black crust. When it is in its early stages it is difficult to see. Staying on the trail means you won’t trample this fragile layer of biotic organisms.

There is certainly plenty to see within Kodachrome Basin, but nearby Grand Staircase-Escalante National Monument possesses another formation worth a visit. Standing at 152 feet high and spanning 92 feet, Grosvenor Arch is a double sandstone arch a mere 10 miles from Kodachrome. The dirt road leading to the arch can get washed out during heavy rains, so travel carefully.

Countless handprints cover the walls of what’s known as “Indian Cave” on the Panorama Trail.

Now that you know what there is to see, you’ll have to decide when to visit. Spring is often quite pleasant, with warm daytime temperatures, though 20s at night are not unusual. Summer months are hottest, with highs in the 90s to near 100 degrees. However, nighttime temperatures are often in the 50s and perfect for sleeping. Summer thunderstorms can cause roads to wash out with heavy downpours, flash floods, fierce winds and lightning. Fall days are warm with cool nights. Look for very cold nights by the middle of October. It doesn’t get much above freezing in winter with overnight lows capable of dropping well below zero. Heavy snow can make travel dangerous if not impossible.

Kodachrome Basin is located nine miles south of Cannonville, via Cottonwood Canyon Road. Open year-round, the park’s campground offers 30 RV sites, 10 with full hookups, and there are central bathrooms with hot showers and flush toilets. There’s also a dump station, fresh water and firewood. Sites sans hookups are $16 a day, while full hookup sites are $25 a night (campground fees include $6 daily charge). There are two large group sites as well. If you need some snacks or beverages, stop by Red Stone Cabins’ general store located in the park.