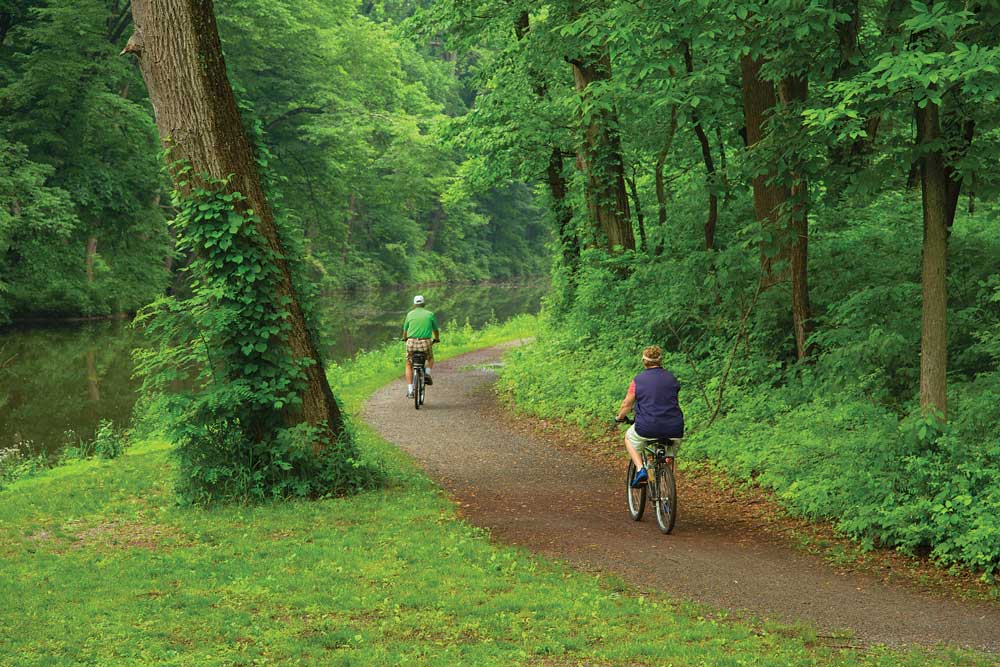 Rivers and trails, the threads that opened expansion of the nation, today open the book to renewal, discovery, play and relaxation, thanks, in large part, to legislation passed in 1968. For 50 years, motorhome travelers have been the winners, with riverside campgrounds; launches into tranquil canoe waters, blue-ribbon fisheries and whitewater excitement; and access to trails through all kinds of habitat, reaching exciting destinations and entering moments in history.

The turning point came in 1965, when President Lyndon B. Johnson delivered his impassioned speech on the “Conservation and Preservation of Natural Beauty.” Decades of dam-building, stream diversions, development, land clearing, neglect and pollution fueled its immediacy. In this speech, Johnson urged action in preserving the beauty of America’s great outdoor treasury because all humanity possesses a deep-seated need to connect with nature.

Wheels churned, and in 1968 the National Wild and Scenic Rivers Act and the National Trails Act passed into law.

Today, of the 3.6 million miles of U.S. streams, the National Wild and Scenic Rivers Act protects 12,734 miles on more than 200 rivers in 40 states. Although this represents only 0.35 percent of our national inventory, it also signals ample resource for growth. Groups like American Rivers, Ducks Unlimited and Western Rivers Conservancy, as well as motivated local citizens, are nudging the way.

With regard to trails, the National Trails Act identified two classifications: National Scenic Trails and National Recreation Trails. National Scenic Trails are 100 miles or longer, may pass through multiple states, and traverse areas of great national significance and beauty. National Recreation Trails can be of any length and are more local or regional in scope, but offer exceptional value (natural, historic and/or cultural). A later expansion of the law recognized National Historic Trails, paths that trace the course of history.

Current trail inventory shows 1,250 national recreation trails, with national scenic and historic trails adding 30 more to the count, for a combined total of more than 60,000 miles. All 50 states participate in this wealth. 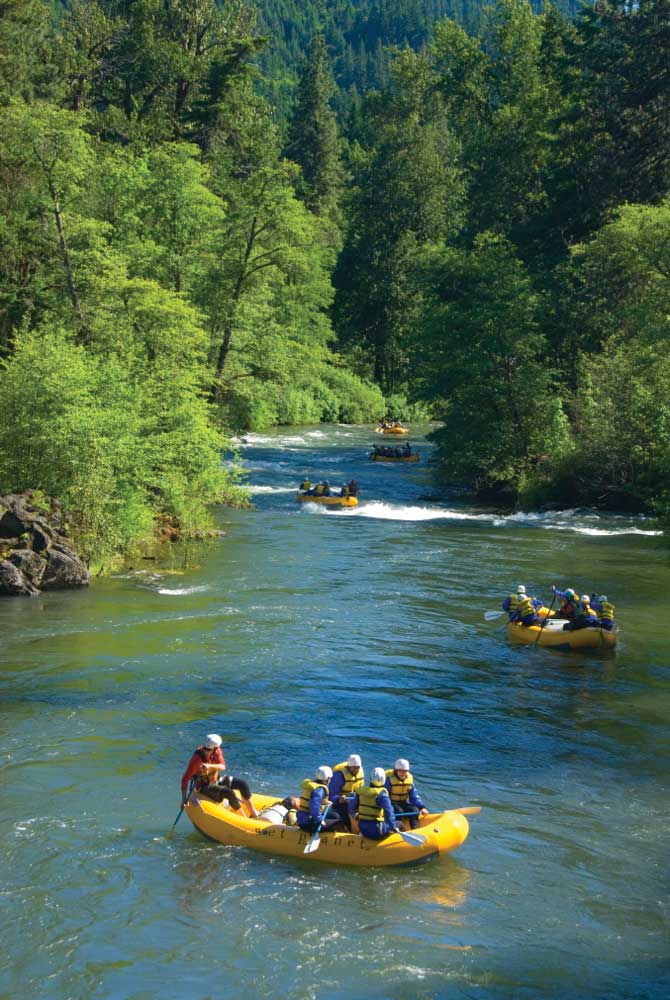 Rafting is a popular activity on the White Salmon Wild and Scenic River in Washington state’s Klickitat County.

For travelers, the designated waters and trails point us on the track of a proven standard of excellence. Although one can always find a hidden treasure worthy of investigation, with the price of fuel and the value of time, a known winner eliminates the cost of trial-and-error. Another benefit is that many of these recognized routes can be found in federal and state parks and in the refuges, forests and recreation areas we are often already driven to seek out.

Hushing, rushing, gurgling, crashing, lulling, roaring. Rivers lay out different soundtracks, different impressions, different experiences. Each tells a unique story and has its own past. Backdrops can vary from rugged mountains to deep basalt canyons, from prairie grasslands to draping hardwood forests, and from desert steppes to the currents that carried the birth of the nation (Minute Man National Historical Park in Concord, Massachusetts). Our travels have shown us all.

From the start, we’ve been exposed to a great catalog of these exceptional waters. We live next to Idaho, whose conservation workhorse, Frank Church, co-sponsored the bill, and our home state of Oregon grabbed the baton and took off running. Oregon boasts 56 federal Wild and Scenic Rivers, including the Rogue River (one of the original eight) and the Styx River, a subterranean portion of Cave Creek (Oregon Caves National Monument and Preserve). 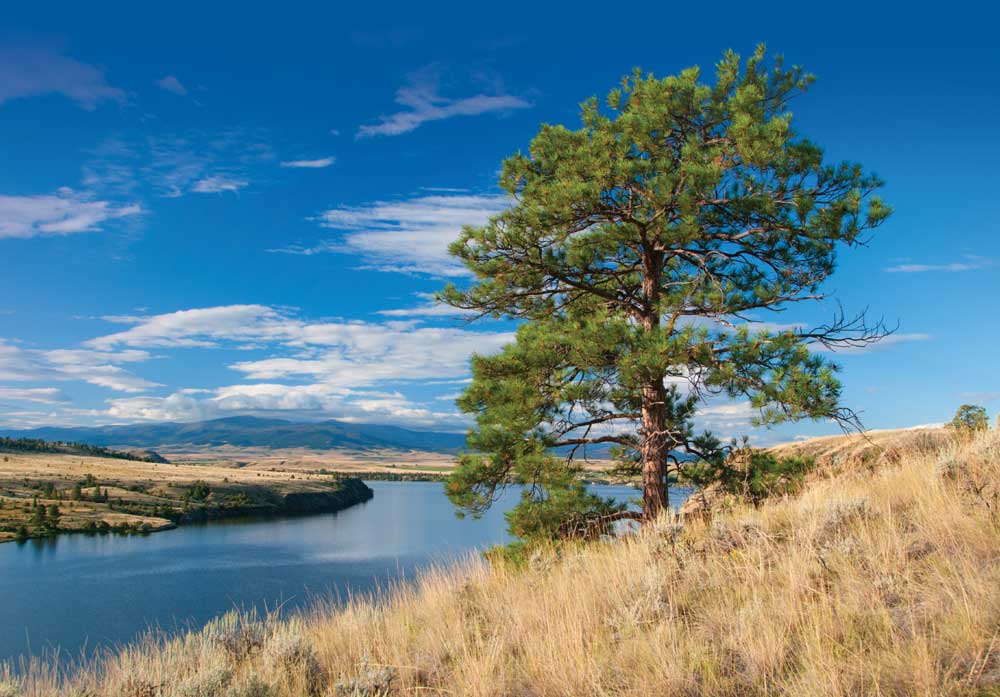 Unspoiled views of Hauser Lake are breathtaking from Two Camps Vista along the Lewis and Clark National Historic Trail in Montana.

Recognized waters can be quiet and gently babbling, like the Eightmile River in Connecticut, or loud and in a hurry, like Idaho’s Lochsa River. They can be desert contradictions, like the Verde in Arizona, or perfectly married to place, like Wyoming’s Clarks Fork of the Yellowstone River. Or they can be celebrations of untethered freedom, like California’s Smith River, the longest remaining free-flowing river in the state.
Rivers flow through special places. Their wending courses have suggested parallel footpaths, initially worn into place by wildlife, then traced by first peoples, followed by settlers and eventually tracked by outdoor recreationists. Many of those river paths have since become National Recreation Trails, doubling the prize. 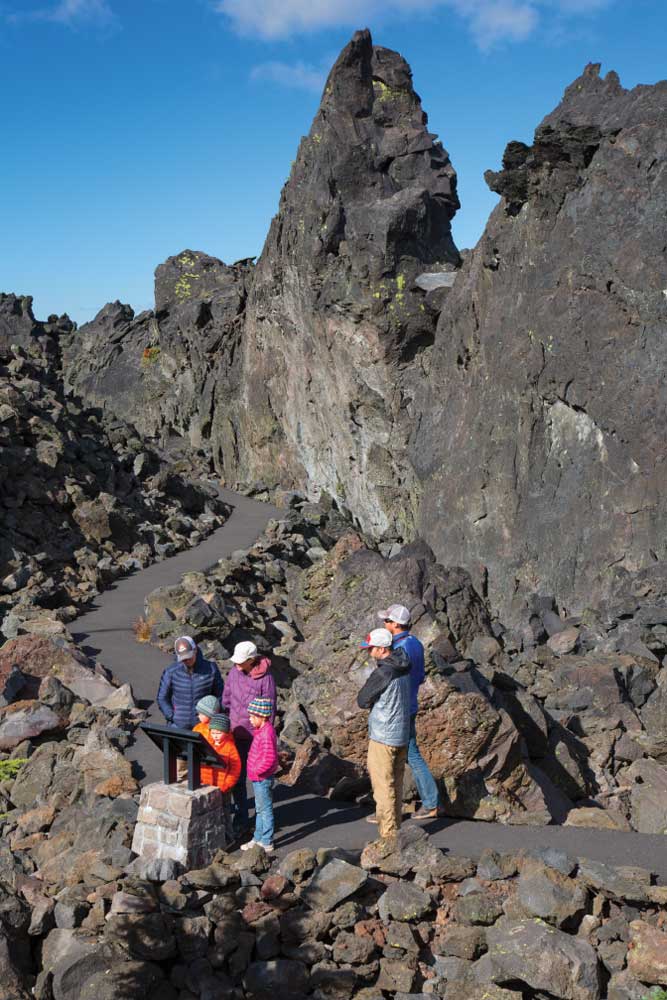 The prestige and permanence associated with the Wild and Scenic River designation has sponsored a host of associated businesses that cater to travelers. Fishing guide services, whitewater rafting outfitters, canoe liveries, shuttle services, campgrounds, RV resorts, espresso stands, fly shops, tackle shops and more ease getting on the river and getting about. When farther from home, these services are great perks.

National Scenic and Historic Trails are fewer in number and bigger in scale, requiring approval by Congress. Maybe because of that, their names pierce our threshold of recognition. The Appalachian and Pacific Crest National Scenic Trails and the Lewis and Clark, Oregon, Iditarod, Santa Fe, Pony Express and Trail of Tears national historic trails all stand as examples.

National Recreation Trails, which do not require Congressional action, are more numerous and proximal, with trails on state, county and federal lands in locations we travel daily. These trails may be on land or on water (a recent development). Familiarity is generally based on the place we live. When traveling, though, National Recreation Trails are easily found by perusing state indices, such as www.americantrails.org/resources/statetrails.

National Recreation Trails cover a wide range of subjects, travel all environments, have lengths to suit all abilities, offer bird and wildlife watching, encourage photography and hold welcomed surprises. Everyone is likely to find at least a few – or 100 – that delight. 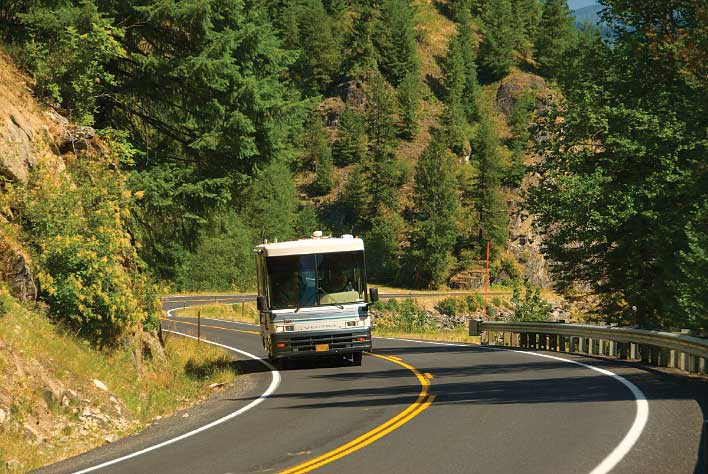 Bottom line, motorhome travelers have been, and will continue to be, treated to outdoor experiences and lifetime memories along clean, significant and free-flowing rivers, and to celebrate trails that are preserved, cleared and maintained for generations to enjoy. What’s more, this treasury continues to grow, bringing new opportunity to step off the busy highway of daily life – be it the transportation highway of Johnson’s era or the information highway of modern times.

River and trail, it’s quite an inventory, quite an achievement. So, here’s to the next 50 years, and many more after that.