In Search of Mayberry: Step back In Time to Mount Airy, North Carolina, Birthplace of Actor Andy Griffith 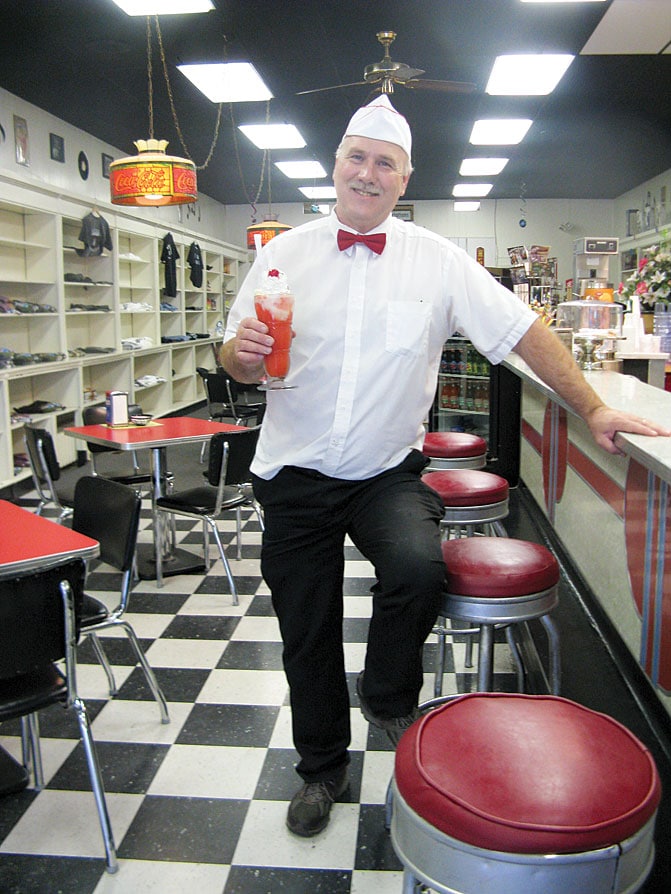 “Whoop, whoop.”
A short blast of the siren pierces the air as a police car pulls into Wally’s Service Station on South Main. It coasts past me slowly, rolling to a stop in front of an adjacent brick courthouse. Curious, I watch from a short distance as the sheriff escorts his suspects inside.
It doesn’t take long for me to realize that all is not as it seems. The vehicle is a classic black-and-white 1962 Ford Galaxie 500 squad car, not unlike the one that Sheriff Andy Taylor drove on The Andy Griffith Show during its eight-season run. And the courthouse sign reads “Mayberry,” not Mount Airy, which is the North Carolina Piedmont town where I’m spending a few days.
Looking around, I spot other signs that I have taken a detour 50 years into the past. The filling station with its dual gas pumps, racks of tires and tow truck parked out front might be mistaken for an operating garage if not for the fact that the truck is vintage, several decades old. The pumps are labeled “Hi-test,” last an option in an era when service stations offered S&H Green Stamps and free road maps and the uniformed attendant checked the oil and cleaned the windshield of every vehicle that pulled in for gas.

The double-bay garage, which first opened in 1937 as a Gulf Oil station, is now a gift shop where passers-by can purchase old-fashioned candies; Cheerwine, Nehi and other nostalgic brands of soda pop; MoonPies and souvenirs. It’s also the headquarters for Squad Car Tours, a novel way to explore Mount Airy, birthplace of the late actor Andy Griffith and inspiration for the fictionalized town of Mayberry, the setting for his ’60s TV show.
Before I slide into the back seat of the roomy squad car for my narrated tour, I venture through the courthouse door into a place seemingly frozen in time though quite familiar to devotees of the TV show — the tidy office of the unflappable Sheriff Taylor and his bumbling deputy, Barney Fife.
“Sarah, get me Aunt Bee,” I say as I ring up Mayberry’s switchboard operator on the candlestick phone on Andy’s desk. As I wait, the jail cell door clanks shut. A visitor has locked himself in, just as Otis, the amiable town drunk, did when he was “three sheets to the wind” and needed to “sleep it off.”
“Watch your head,” “Sheriff” Melvin Miles cautions, as he swings open the door of the old-timey police sedan. A retired teacher and longtime resident, Miles has been patrolling the streets of Mount Airy for nearly seven years as one of a handful of “lawmen” with Squad Car Tours.
We first head east on State Highway 103 to the world’s largest open-face granite quarry on the outskirts of town. In full operation since the late 1880s, it’s so large that it’s said to be visible from outer space.
“This quarry is 1 mile across and an estimated 1 to 1½ miles deep,” Miles says, noting that the vein of granite is 7 miles long underground and extends all the way under the downtown area. Geologists estimate that the massive granite deposit could be mined for another 500 years.
The quarry has supplied granite for a number of Washington, D.C.’s iconic monuments and buildings, although it’s also been a favorite building material locally. As we loop back into town, I see why Mount Airy is nicknamed Granite City as Miles points out building after building made of granite including the Grace Moravian Church that Andy Griffith attended with his parents.
The sheriff regales us with tales of Eng and Chang Bunker, the original Siamese twins who eventually settled in nearby White Plains, married sisters and fathered 21 children. And he tells us about another local celebrity, country music star Donna Fargo, born Yvonne Vaughan.

A bronze TV Land statue of Andy and Opie stands near the playhouse and adjacent Andy Griffith Museum.

Like most visitors to Mount Airy, however, what we really want to hear about is Mayberry.
“The show was filmed on set in California,” Miles informs us, noting that Andy Griffith always denied that it was based on his hometown. It’s an uncanny coincidence that many of the local place names, streets such as Rockford, Banner, Spring, Haymore, Oak, Willow and River, among others, all appeared on the show. Or that Aunt Bee and other townsfolk often traveled to Mount Pilot (most likely inspired by local landmark Pilot Mountain) to shop.
“Most of the characters on the show were named for local people,” Miles adds.
As we cruise Main Street, we pass the Bluebird Diner, Floyd’s City Barber Shop and Snappy Lunch. The latter, our tour guide reminds us, is where Sheriff Taylor once said was a nice place to take a date. I expect to see red-headed Opie at the Mayberry Soda Fountain or Barney Fife escorting his steady gal Thelma Lou to the movies.
A number of area businesses capitalize on the Mayberry theme. There’s Opie’s Candy Shop and Barney’s Café as well as the Mayberry Five & Dime. At the Mayberry Motor Inn, nostalgia seekers can view the Aunt Bee Room, which contains an eclectic assortment of personal items, clothing and a bedroom set that once belonged to Francis Bavier, who played Opie’s favorite aunt on the show and retired to nearby Siler City, North Carolina.
Not far from U.S. Highway 52, designated the Andy Griffith Highway, Miles pulls up in front of a modest bungalow on East Haywood Street. This was Griffith’s boyhood home.
“Andy was an only child,” the sheriff tells us. “He slept in a dresser drawer his first year. His parents bought the house for $600, a significant sum in 1935.” They stayed there until 1966 when Andy moved them to California.

Visitors can catch a squad car tour from Wally’s Service Station or just enjoy a Grape Nehi or MoonPie sold at the gift shop that occupies what once was a working garage and service station.

Furnished in 1960s period furniture, the home, known as Andy’s Homeplace Bed and Breakfast, is available for overnight or weekly rentals through the local Hampton Inn. The two-bedroom, one-bath home has a bright, airy kitchen and retro furnishings from the chunky living room furniture to the chenille coverlets on the beds.
Later, after my squad car tour, I stop by The Andy Griffith Museum just up the road a piece from Griffith’s house to view items from his life, beginning with early childhood. This rich repository of memorabilia — which includes photographs, props, vinyl records and movie posters — was amassed by Emmett Forrest, a lifelong friend. The collection also has Goober Pyle’s beanie, Barney’s salt-and-pepper suit and other items donated by co-stars.
A bronze TV Land statue of Andy and Opie “goin’ fishin’” greets visitors to the museum and adjacent community theater and arts center. Now the Andy Griffith Playhouse, it was originally the Rockford Street School where the late actor first performed on stage.
Museum admission includes access to the Old-Time Music Heritage Hall in the 1930s-era Earle Theatre that honors legendary fiddle and banjo player Tommy Jarrell and other local musicians. The North Main Street theater, where Andy Griffith’s first movie premiered, also hosts jam sessions and WPAQ’s Merry-Go-Round, a popular weekly live radio broadcast of old-time music since 1948.
I’m thrilled to find Thelma Lou — actress Betty Lynn — at the museum signing autographs and greeting fans as she does on a regular basis throughout the year.
“I’m the luckiest old lady I know,” she quips as she shares stories about her early movies and time on the set of The Andy Griffith Show.
The octogenarian moved to Mount Airy after falling in love with the community during Mayberry Days, the annual gathering of fans, lookalikes and actors from the show. The four- day event, held the last weekend in September (scheduled for September 26 to 29 this year), features music, big-screen airings of reruns and an hour-long parade up Main Street. A much-heralded event is the pork-chop-sandwich-eating contest sponsored by Snappy Lunch and featuring its signature dish, a fried boneless pork chop coated in an egg batter; dressed with coleslaw, chili, onions, mustard and tomatoes; and served on a bun.
At the luncheonette, the sandwich, priced at $4.05, is the most expensive item on the menu, which also includes a ham and cheese sandwich for $1.80 or a breaded hamburger for a nickel more.
The next morning finds me at the Mount Airy Museum of Regional History on North Main, where I absorb several centuries of local history from the Saura Indians, the earliest inhabitants, to the first settlers in the “hollows” and celebrated residents including the conjoined Bunker twins and Donna Fargo. Other exhibits describe the area’s natural history and commerce, everything from granite mining to medicine and making moonshine.

Guests at the Andy Griffith Homeplace can cook breakfast in the same kitchen that Griffith’s mother used.

Although Andy and Mayberry are the biggest draws for most people, Surry County also enjoys a well-deserved reputation for its wines. A drive along the Yadkin Valley Wine Trail introduces visitors to nearly three-dozen boutique wineries, including Round Peak Vineyard, Brushy Mountain Winery, Carolina Heritage Vineyard and Winery, and McRitchie Winery & Ciderworks, open to the public for tastings and on-site sales.
The valley also is a top destination for hiking, kayaking and other outdoor recreation, particularly at Pilot Mountain State Park, which includes Pilot Mountain with its distinctive rocky “knob” at the summit. The Overmountain Victory National Historic Trail, a favorite of hikers and mountain bikers, can be accessed from the trailhead in Elkin, another community with small-town “Mayberry” appeal.
While the line between Andy Griffith’s hometown of Mount Airy and his fictitious TV town may blur, I leave the area delighted that there’s still a little Mayberry left in the world.