In a modern era where we jump out of the shower and are out the door in minutes every morning, it may seem odd to think there’s a place where the act of taking a simple bath – literally being in hot water – becomes a leisurely event, a special occasion to be savored.

That’s exactly the case in Hot Springs National Park, however. Here at the foot of Arkansas’ Ouachita Mountains, nearly 1 million gallons of mineral-rich hot water spills forth from 47 protected springs every single day. A serendipitous superabundance that gave the town of Hot Springs its name and turned it into America’s original spa resort.
The water flowing from these springs was considered so special, in fact, that President Andrew Jackson made the area the first-ever federal reserve in 1832. While Yellowstone may have become the original national park 40 years later, the Hot Springs Reservation was the mold it and the rest of America’s national park system were cast from. 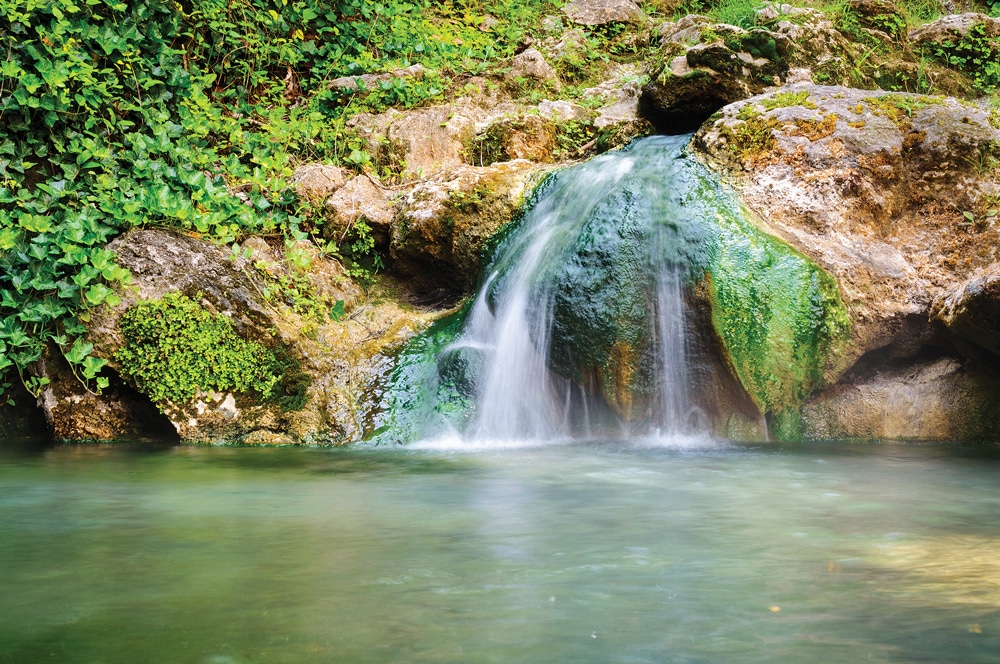 Hot Springs National Park’s waters bubble up from 47 protected springs at a constant 143 degrees Fahrenheit. Radio-carbon dating has estimated the water is more than 4,000 years old.

Today, Hot Springs bears the distinction of being the only national park to be located entirely within city limits. In fact, the town and the park flow together so seamlessly that it’s often hard to tell where one stops and the other begins.
This unique amalgamation has created one of the most unusual national park experiences in America. So sit back and relax as we relate the adventures to be had only in Hot Springs National Park.

You may have heard by now that 2016 marks the 100th anniversary of the founding of the National Park Service. To celebrate, MotorHome will be bringing you a yearlong series of unforgettable experiences – from mild to wild – that are unique to America’s national parks. Places where we hope you’ll Find Your Adventure in the months ahead.

Like the roots of the town, Hot Springs’ waters run deep – about 8,000 feet below the surface, to be exact.
The naturally pure spring water here is old as well, having been radiocarbon dated to 4,400 years of age. To put that in perspective, that means the water bubbling up from the ground today fell as rain about the same time the Egyptian pharaohs were building their pyramids.
Those waters surface at a remarkably consistent 143 degrees Fahrenheit. What’s not used in the town’s spas is cooled down and piped to several public drinking fountains, where people line up to fill jugs of the surprisingly palatable water.
Ultimately, it’s this resource the park was designed to protect, as its holdings cover not only the developed stretch known as Bathhouse Row but also the hills around town where every new rainstorm helps recharge the aquifer for future generations. In other words, Hot Springs National Park is really all about the water.

It’s said that Native Americans from many different tribes peaceably shared these hot springs in what they called the Valley of the Vapors. Hernando de Soto was the first European visitor in 1541, and both locals and out-of-towners have been bathing in the waters here ever since.

Gradually the health-oriented pilgrims the hot springs attracted came from greater distances – as far away as New York and Chicago – drawn by claims of the water’s healing properties. Locals responded by building hotels and the first crude bathhouses for the comfort and privacy of their guests.
By 1888, an earlier Victorian version of what’s become known as Bathhouse Row had sprung up along the town’s Central Avenue. Those structures were in turn replaced by the eight far grander and more ornate buildings – several of which date back to the early 1900s – that occupy the Row today.
To get a look at how upscale this second generation of bathhouses became, take a walk through the 1915 Fordyce Bathhouse, which is now the Hot Springs National Park visitor center. What you’ll find on its four floors are generous amounts of marble, stained glass and statuary that created an atmosphere of relaxed opulence. Of particular interest are the re-created treatment rooms, some furnished with period electrical contraptions full of dials and switches that frankly look a little scary. Not to mention a fully equipped gymnasium that is clearly the forerunner to the modern health clubs.

After seeing all this preserved in its museumlike state, take a walk several doors down the sidewalk and check in at the front desk of the 1911 Buckstaff Bathhouse. One of only two existing bathhouses that still allow visitors to bathe in the hot spring water, the Buckstaff – the longest continually operating spa in town – is old-school all the way.

From the vintage-looking tubs to the European-style bathing regimen itself (which includes a good loofah back-scrubbing from your uniformed attendant, a sitz-bath, a session in the cramped metal box known as the steam cabinet and a hot pack-wrap followed by a light massage), very little seems to have changed in the last century. Simply put, this is the place to go if you want to have an experience similar to what visitors like Babe Ruth and Franklin Delano Roosevelt took to relieve everything from hangovers to the symptoms of polio.
The other original bathhouse still operating is the nearby Quapaw Bathhouse. Built in 1922 beneath a soaring rooftop dome, it was thoroughly remodeled in 2007. Not surprisingly its treatments are a good bit more modern and include soaking in a series of communal pools of varying temperatures, private MicroSilk tubs that supersaturate the water with oxygen, a manmade steam “cave” and the latest spa treatments like hot-stone massages and salt body polishes.
Both the old and new approaches have their fans. Which means the only way to decide which you prefer is to try them both. It is by far the most grueling part of this national park adventure to be sure, but do your best to suffer through all this relaxation with a brave face.

After you’ve “taken the waters” it’s time to get out and explore some of the rest of the park and surrounding areas. But don’t just take our word for it.
One of the common elements in the health regimens prescribed to spa visitors in those early days was to enjoy a vigorous walk in the fresh air surrounded by the beauty of nature. Hot Springs National Park makes that easy with 26 miles of hiking trails, many of which can be accessed from the path that runs behind Bathhouse Row.
One worthwhile destination accessible by foot (or by vehicle if your bathhouse experience left you feeling a little too relaxed) is Hot Springs Mountain Tower. At 216 feet tall, this land-bound crow’s nest offers sweeping 360-degree vistas spanning more than 100 miles in every direction. The view itself is fantastic and becomes more meaningful when you realize that it’s the landscape below you from which Hot Springs National Park’s waters flow.

A tribute to hometown-boy-made-good Bill Clinton.

Speaking of the town of Hot Springs and water, no attraction combines the two quite like National Park Duck Tours. These 75-minute tours aboard amphibious World War II-era landing craft known as “Ducks” take in the town itself with a humorous and informative commentary from the driver before splashing into Lake Hamilton for a little scenic cruise.
Finally, take a step back in time to the era when notable underworld figures like Lucky Luciano and Al Capone visited Hot Springs with their entourages for weeks at a time. You can learn more on a tour of the Gangster Museum of America located directly across the street from the park’s Bathhouse Row.

Of course, those underworld figures knew what it was like to be in trouble with the law. And Hot Springs, Arkansas, was where they came to get away from it.
How ironic then that, when it comes to choosing a secluded hideout, they picked Hot Springs National Park. A place where getting yourself into hot water is the whole idea. 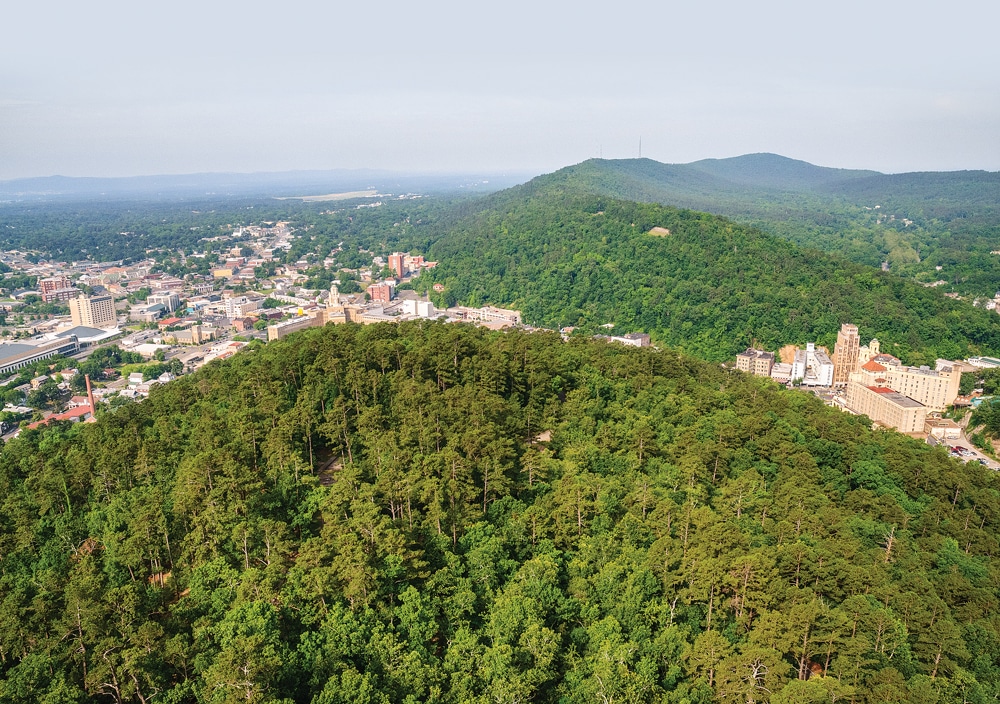