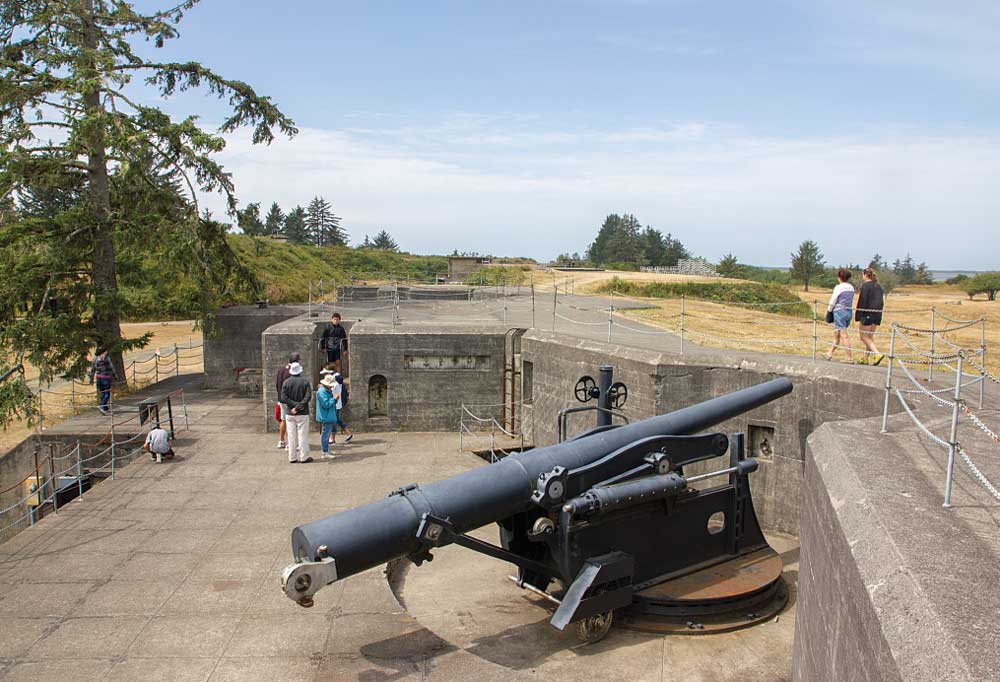 Exploring the Portland, Oregon, area by motorhome delights all senses

During our motorhome trip through Oregon, my husband, Jim, and I lingered to explore historical sites and beautiful landscapes, and we also experienced one of my all-time favorite RV parks, Belknap Hot Springs.

Fort Stevens State Park, in the northwest corner of Oregon, was our first stop. Fort Stevens was a military defense installation at the mouth of the Columbia River for 84 years, from the Civil War to World War II. In 1863, President Abraham Lincoln ordered construction of an earthwork — a fort made mainly of dirt — to guard the Columbia River from British and Confederate ships. During World War II, a Japanese submarine fired 17 shells at Fort Stevens, causing minor damage. The fort’s commander ordered an immediate blackout and did not allow his men to return fire, which would have revealed their position. Fort Stevens was the first U.S. mainland military base to be fired upon by a foreign power since the War of 1812. The fort was decommissioned in 1947.

Now it’s a 4,300-acre state park with a historic military fort and shipwreck, camping, hiking and biking trails and swimming. The 476 RV sites (174 full hookups, 302 with water and electric) are spread out in 12 tree-lined loops. After we settled into our site, we explored the park via bikes on the network of 9 miles of paved bicycle trails. At the visitor center we brushed up on our American history — I had no idea Oregon had anything to do with the Civil War — and looked at a scale-model of the fort as an active military post. We walked through the concrete batteries that housed mortars and long- and short-range rifles. On the beach, we wandered around the wreck of the Peter Iredale, a four-masted steel barque sailing vessel that ran ashore in 1906. More than a century later, a rusty bow is all that remains. 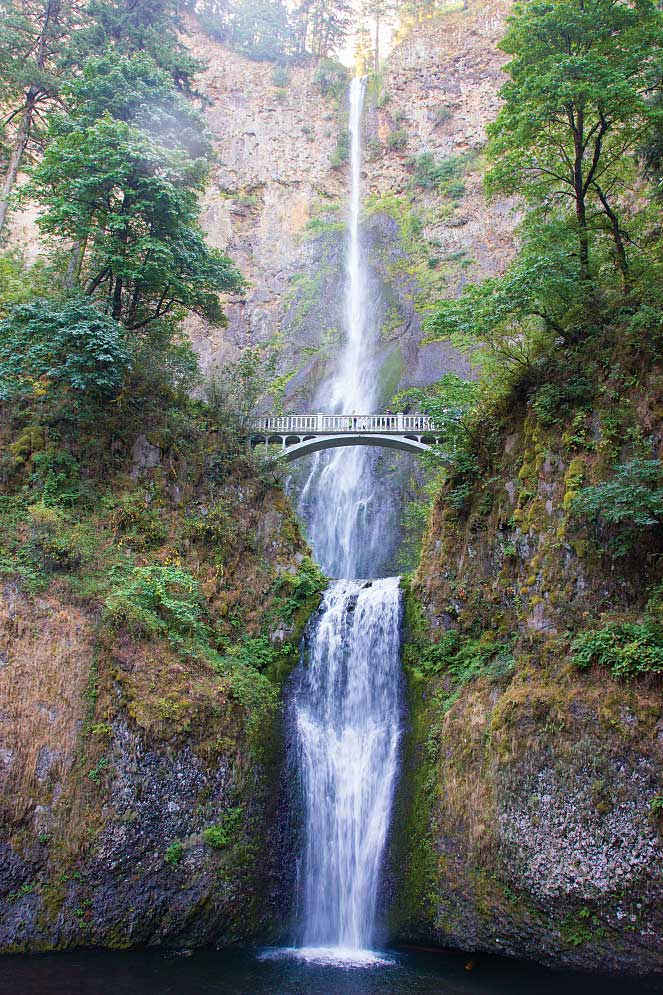 Multnomah Falls is Oregon’s highest waterfall and its most visited natural attraction.

As we headed south on U.S. Highway 101 toward Portland, the navigator (that’s me) missed the turn to U.S. Highway 26. We ended up in Cannon Beach, a small coastal town. Rather than turning around, we decided to explore this picturesque village. We found RV parking near the visitor center, where we learned about the main attraction, Haystack Rock. Once on the beach, we walked about 20 minutes to arrive at this massive “sea stack,” which rises 235 feet from the edge of the shoreline. We noticed the many birds nesting on the rock. At the Haystack Rock Awareness Program, we learned most of the birds are Western gulls, but several other types of birds nest here, too, including tufted puffins and cormorants. Haystack Rock came from a volcano in Idaho millions of years ago that sent a violent, rapid river of molten rock down the Columbia River Valley. When it reached the sea, some flows re-erupted, sending piles of molten rock up through the sea floor, hardening into sea stacks. In retrospect, I’m glad I missed that turn; Cannon Beach is high on my list of favorite “mistakes.”

We arrived at Pheasant Ridge RV Park in Wilsonville, about 20 miles south of Portland, without further unintended adventure. We had several days to enjoy the Portland area, starting with three sites on the Columbia River Gorge.

The first was Multnomah Falls, which drops 611 feet, with the upper fall plummeting 542 feet, and the lower fall 69 feet. It’s Oregon’s highest waterfall and its most visited natural attraction. The falls can be seen from three locations: a viewing area at the base; Benson Bridge, which spans the gap above the lower falls; and the top of the falls. After hiking the steep path to the top, we were rewarded with a clear view of the Gorge. Before we left, we browsed the visitor center and gift shop in the Multnomah Falls Lodge.

Our second stop was Bonneville Fish Hatchery, 9 miles east of Multnomah Falls on Interstate 84. We had heard about Herman the Sturgeon, the hatchery’s most popular resident. Herman is a 75-year-old, 10-foot-long, 450-pound dinosaur of a fish. Sturgeon originated 200 million years ago during the Jurassic era. Their heads and bodies are covered with rows of bony plates that serve as armor. In late summer and early fall, Herman gets upstaged by the 80,000 adult salmon that return to spawn. This is also a good time to visit the nearby Bonneville Dam Visitor Center with its fish-viewing windows to see salmon swimming through the two fish ladders, one on each side of the Columbia River. 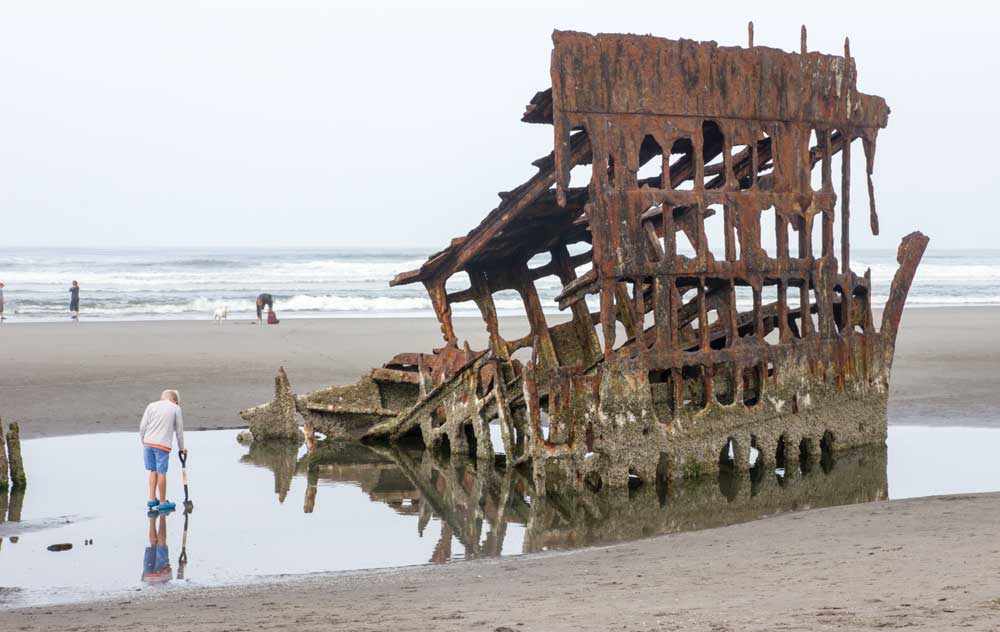 At Fort Stevens State Park, visitors wander around the wreck of the Peter Iredale, a four-masted steel barque sailing vessel that ran ashore in 1906.

On our way back to Portland, we stopped at the third site: Vista House. It was built in 1917 on Crown Point, a scenic promontory 733 feet above the Columbia River. Samuel Lancaster, supervisor of the Columbia River Highway project, proposed “an observatory from which the view both up and down the Columbia could be viewed in silent communication with the infinite.” He suggested it could “serve as a comfort station for the tourist and travelers of America’s greatest highway.” While that may sound like a typical rest stop on any interstate highway, there’s nothing ordinary about it. The floors and toilet stalls are marble. The interior of the domed rotunda has a bronze lining. The windows above eye level are made of stained glass. The Vista House was a comfort to me, and the view, as Lancaster suggested, inspired me with a sense of awe.

Jim and I filled the next few days with some popular attractions in the city, starting with Portland Japanese Gardens. In the late 1950s, Portland Mayor Terry Shrunk proposed a Japanese garden to provide a place of beauty and serenity, and to forge a healing connection to Japan after World War II. After site dedication in 1961, Professor Takuma Tono of Tokyo Agricultural University designed five different garden styles on 5.5 acres.
The garden opened to the public in 1967. The Kashintei Tea House was constructed in Japan, shipped in pieces, and rebuilt in the Garden in 1968. Other buildings and improvements followed. It now encompasses 12 acres with eight separate garden styles featuring meandering streams, a koi pond and intimate walkways. Numerous visiting Japanese dignitaries have proclaimed it as one of the most authentic and beautiful Japanese gardens outside of the island nation.

As we wandered through the gardens, green was the predominant color; the trees, plants, moss, even the water reflected shades of green. We found two notable exceptions: the koi pond, especially when these colorful carp were being fed; and the Kabuki exhibit, which displayed seven brilliantly hand-dyed and lavishly embroidered silk kimonos on loan from theaters in Japan. Kabuki, Japan’s most flamboyant and fanciful performance art, originated in the 17th century and is still popular today.

The International Rose Test Garden sits next to the Japanese Garden. Having celebrated its 100th year in 2017, it’s the oldest official continuously operated public rose test garden in the U.S. During World War I, hybridists sent roses from around the world to Portland to preserve species of European roses that might be decimated by bombings. The mild winters and long growing season are ideal for the 8,000 individual rose bushes in the 4.5-acre garden. The city’s affinity for roses dates back to 1888, when Georgiana Pittock invited friends and neighbors to exhibit their roses in her garden. The rose show became an annual event for Portland Rose Society. In anticipation of the 1905 Lewis and Clark Centennial Exposition, residents planted 22 miles of roses on curbs along the parade route. Strolling through the gardens in one of the City of Roses’ signature landmarks, we stopped to smell the roses. 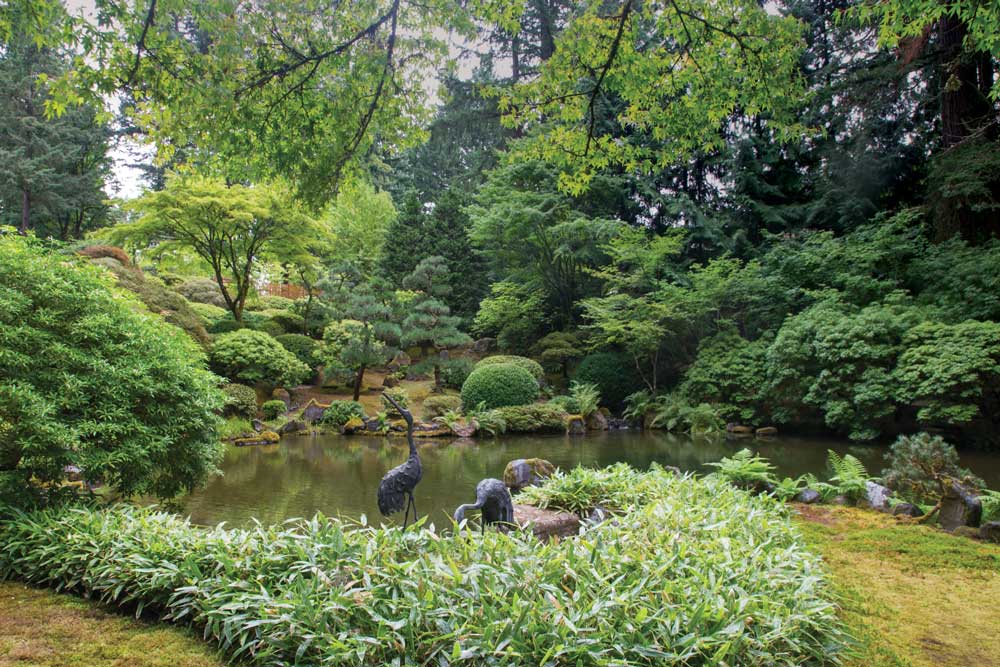 Numerous visiting Japanese dignitaries have proclaimed Portland Japanese Garden as one of the most authentic and beautiful Japanese gardens outside of the island nation.

Portland’s history came alive during our tour of Pittock Mansion, thanks to our guide who told us interesting stories and fascinating facts about the building and the people who lived there. Henry and Georgiana Pittock helped transform Portland from a muddy, isolated village to a bustling modern city. In 1853, Henry, 19 years old and penniless, arrived in Portland by wagon train. He found work as a typesetter at “The Oregonian” newspaper, and within six years become the paper’s owner. He built an empire that included holdings in real estate, banking, transportation, ranching and mining. In addition to originating the annual Rose Festival, Henry’s wife, Georgiana, founded and raised funds for several charities and cultural organizations. In 1914, they built Pittock Mansion, a 16,000-square-foot French Renaissance-style château with 46 rooms. Georgiana and Henry lived in their dream home for four years until their deaths in 1918 and 1919, respectively. The mansion remained in the family until 1958. The house sat empty for years and was severely damaged by a storm in 1962. The city of Portland bought it in 1964 to renovate as a museum. The mansion sits on a hill 1,000 feet above the city, with a view of the skyline and Mount Hood, Oregon’s highest mountain.

Next, we moved the motorhome to Belknap Hot Springs. Located on the McKenzie River, it has 47 RV sites, a lodge, cabins and two mineral hot springs pools. The McKenzie River Trail, which runs right by Belknap, was named the best trail in America by “Bike” and “Men’s Fitness” magazines. The 26-mile hiking and biking trail winds along the river through lush 300-year-old forests. We rode along this picturesque trail, occasionally walking our mountain bikes across streams and handmade log bridges over the river. If we had been thinking ahead, we could have arranged a shuttle to take us to the start of the trail to see more of the scenery. As it was, we saw less than half of it since we didn’t have the legs and lungs to do the entire trail both ways.

After the bike ride, we soaked in the hot springs and explored the gardens. Acres of gardens, especially the Secret Garden, delight young and old alike. A family arrived with a boy, about 4 years old. He looked around with excitement and proclaimed, “This is like the place where angels live!” Indeed, I could imagine angels perched atop the stone pillars, dancing in the fountain and watching us mortals explore their home.

We had 10 glorious days to expand our minds, exercise our bodies, and entertain our senses during our time in Oregon. It was time well spent.