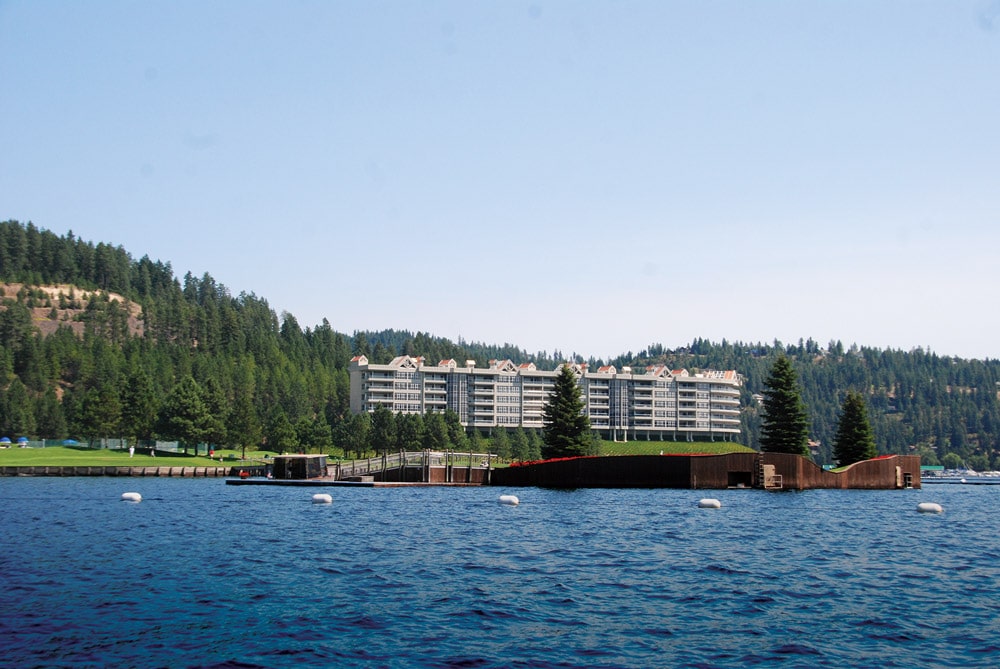 Strolling down Sherman Avenue, in the heart of Coeur d’Alene, Idaho, it’s impossible to miss Mudgy, the moose statue. Towering conifer forests surrounding Coeur d’Alene and the rest of the Idaho Panhandle contain one of the densest moose populations in the United States, with up to 1.5 moose per square mile. Mudgy is not one of them. He’s a bronze statue of a children’s storybook character created by Susan Hagan Nipp, a longtime resident of Coeur d’Alene who’s known nationally for creating the popular Wee Sing CDs, a music staple among the nursery-school crowd.

The Coeur d’Alene Resort tempts golfers with its signature floating green and other lakeside amenities including a spa, lake cruises and stand-up paddleboard rentals.

Mudgy’s friendly mug welcomes youngsters and those still young at heart who’ve come to enjoy themselves at this Idaho playground. In addition to Nipp, Academy Award–winning actress Patty Duke and NYPD Blue actor Dennis Franz live in Coeur d’Alene, along with some 44,000 other people. Former Denver Broncos quarterback John Elway and NHL hockey legend Wayne Gretzky have summer homes here, too, a testament to the lake city’s appeal.
This late-19th-century mining and timbering hub is now one of the more popular vacation destinations in the Pacific Northwest, and for good reason. It offers something for everyone. You can immerse yourself in most watersports, take a cruise around the lake, hike or bike the many miles of paved and unpaved trails, play golf, explore historic sites, take a scenic drive, dine and shop at any of a number of cute restaurants and boutiques, or simply soak up the sun on the immaculately maintained public beach. Coeur d’Alene is a classy water resort and mountain resort all in one.

Located 30 miles east of Spokane, Washington, Coeur d’Alene is the seat of Kootenai County and second largest metropolitan area in the state, after Boise, though it hardly feels like a city in the urban jungle sense. It exudes all the relaxing, carefree essence of a consummate vacation destination. Perhaps that’s why Barbara Walters once called Coeur d’Alene “a little slice of heaven” and included it on her list of most fascinating places to visit.
Coeur d’Alene is named after the Coeur d’Alene tribe of Native Americans who lived in the region prior to the arrival of French-Canadian fur traders in the late-18th century. The Coeur d’Alene people resided in 16 villages along the Spokane and St. Joe rivers near Lake Coeur d’Alene and Hayden Lake. They traded extensively and had close social ties to other inland tribes throughout the Northwest.

Blackwell Island RV Park, at the mouth of the Spokane River, offers lakefront camping by its sandy beach.

The popular meaning of the name Coeur d’Alene comes from the French language and means “heart of an awl.” An awl is a sharp, pointed tool used to make holes in leather, wood and other materials. The term likely refers to the Coeur d’Alene tribe’s reputation for sharp-hearted or shrewd fur-trading practices. However, some believe the name of the city and the lake is based on an alternate translation, “eye of the needle,” which refers to the place where the lake narrows into the Spokane River.
One of those fur traders was David Thompson of the North West Company, an accomplished cartographer from the late-1700s through the mid-1800s who mapped more than 1.5 million square miles of U.S. and Canadian territory, including the area around Coeur d’Alene, in an attempt to open a trade route and trading posts through the northern interior to the Pacific Ocean. In 1809, he established the Kullyspell House, a trading post at nearby Lake Pend Oreille.
In 1853, Pierre-Jean De Smet, a Belgian Jesuit priest, established Cataldo Mission on the Coeur d’Alene River, the oldest standing building in Idaho today. Shortly after that, the military constructed the 624-mile Mullen Road, close to where Interstate 90 is today, connecting Fort Benton, Montana, to Fort Walla Walla, Washington. The military also built Fort Sherman at the outlet of Lake Coeur d’Alene to protect the road. Today, North Idaho College is located on the site of the fort, and you can see a replica of the fort’s gate there.
It wasn’t until the discovery of gold in 1883 that the area saw the first real influx of civilians. A town grew around the fort, with mining as its economic basis. The gold claim proved minor, but subsequent discoveries of silver, lead and zinc created a boom augmented by the arrival of the Northern Pacific Transcontinental Railroad. Beginning in 1886, mine workers could travel by rail to Coeur d’Alene, then by stern-wheeler — a steamboat with the paddlewheel on the back — up the river to the Cataldo Mission, and then by narrow-gauge rail to the mines. Likewise, the trains and stern-wheelers transported ore to Coeur d’Alene and eventually to smelters in the East. The introduction of these rear-powered steamboats also gave the area its first tourist activity, cruising the lake.

By the turn of the 20th century, as mining waned, the timber industry became the town’s economic lifeline. For the next 20 years, millions of logs floated down local rivers to Lake Coeur d’Alene and then to the region’s sawmills. Eventually, the logging boom ended, though today boaters on the lake have periodic reminders of the era when a sizable log will unexpectedly float to the surface after resting for decades on the bottom of the lake. Coeur d’Alene is now headquarters for the Idaho Panhandle National Forests. The USDA Forest Service’s nursery grows 20 million evergreen seedlings annually to replace trees harvested from various national and state forests.

Osprey are among the many raptors, songbirds and waterfowl commonly seen along the birding trail by Cougar Bay and elsewhere on Lake Coeur d’Alene.

The city of Coeur d’Alene is located on the north end of its namesake lake. This large body of water runs 25 miles long and 1 to 3 miles wide for much of its length, with an average depth of 120 feet. It’s fed primarily by the Coeur d’Alene and St. Joe rivers on the southern end of the lake and flows into the Spokane River near the city. With 50 square miles of water and 100-plus miles of shoreline, the lake has plenty of room for just about any water-based activity, even at the peak of the summer season.
Lake Coeur d’Alene has a split personality as a rockin’ beach resort at its northern end and a more peaceful, less developed mountain lake at its southern end. Several trailer-friendly campgrounds are tucked into the area around Wolf Lodge Bay, east of the city, and near Idaho Route 97 where long stretches of the lake are uninhabited. Anglers tuck into quiet bays to cast for pike and muskie, and bird watchers frequently spot bald eagles and osprey lifting small fish with their sharp talons from the water’s surface.
The northern part of the lake, around City Beach in Coeur d’Alene, is where the action is. At dawn, it’s common to see a posse of paddle-boarders testing their skills on the glassy bay. Soon water-skiers and wakeboarders whiz by, zigzagging side to side behind racy motorboats. Jet Skis dart here and there, jumping ever-growing waves. By noon, parasailers pulled by similar powerboats climb into the air for a bird’s-eye view of the activity. A seaplane revs up and takes off, giving its passengers an even higher, wider view of the lake. And by late afternoon, a crowd of 150 boards the Spirit of Coeur d’Alene or one of her sister vessels for a sightseeing cruise.

There’s much to do and see on land as well, beginning with a drive on the Lake Coeur d’Alene Scenic Byway (Idaho Route 97). From its junction with Interstate 90, this winding two-lane road travels 35.8 miles down the eastern shoreline of the lake, over hills, through woodlands and past the historic town of Harrison, then ends at the junction with Idaho Route 3. In addition to the stunning scenery and wildlife viewing, the byway’s eight designated interpretive sites ground you in the area’s human and natural history.

The annual Coeur d’Alene triathlon, nicknamed “the scenic challenge,” starts and ends at the City Park beach each August.

For those more inclined to see the scenery on foot or by bicycle, Coeur d’Alene is bike-path heaven. Six rail trails ribbon through the area, including the Hiawatha Trail, the Atlas Bike Trail, the Cherry Hill BMX Trail and the Spokane Centennial Trail. However, it’s a toss-up between the Trail of the Coeur d’Alenes and the North Idaho Centennial Trail as to the best route of the bunch.
In 2012, the Rails to Trails Conservancy named the Trail of the Coeur d’Alenes among the top 25 rail trails in America. This 10-foot-wide, 72-mile-long paved path between Mullen and Plummer, Idaho, follows the Coeur d’Alene River through Harrison, passing through Heyburn and Old Mission state parks. In addition to welcoming hikers, bicyclists and in-line skaters, the trail is wheelchair-accessible and pet-friendly.
The North Idaho Centennial Trail is a 24-mile multiuse corridor from the Idaho–Washington border to Higgins Point, 6 miles east of Coeur d’Alene. It travels down the east side of the lake and along the Spokane River, then connects with the Spokane River Centennial Trail. The trail in the vicinity of the beach is busy with joggers, bicyclists, dog walkers, strollers, skateboarders and in-line skaters, but the farther you travel from the resort, the less populated it becomes.
Interestingly, if someone is traveling point-to-point along one of the rail trails in the Coeur d’Alene area, they typically head toward the city, which makes sense. Why would you want to leave a place that has so many outdoor recreational opportunities? Maybe the historians got it wrong. Perhaps the real translation of Coeur d’Alene is not “heart of the awl” but “heart of it all.”

Bear Creek Campground
Location: Near Mineral Ridge Scenic Trail in the Idaho Panhandle National Forests
While not lakeside camping, this small USDA Forest Service campground offers creekside campsites with lots of space and trees between them — perfect for those who like privacy and quiet. No fee and no reservations.
Bear Creek and many of the Panhandle’s other Forest Service campgrounds offer sites that are suitable for RVs, but always check beforehand for size limits.
208-765-7233 | www.fs.usda.gov/ipnf

Blackwell Island RV Park
Location: Mouth of the Spokane River, end of Lake Coeur d’Alene
Full hookups, free Wi-Fi, private beach, dock, laundry and walking distance to Cedar’s Floating Restaurant. This 182-site full-service RV resort is close to all of the action in town. Book early because this is a popular spot.
888-571-2900 | www.idahorvpark.com

Wolf Lodge RV Park
Location: 8 miles east of Lake Coeur d’Alene
A pet-friendly RV resort offering full hookups and a camp store, along with nightly group campfires, free Wi-Fi, bike and canoe rentals, laundry facilities, volleyball and other resort amenities. No cable TV, but satellite works well if you have it. It’s not on the lake, though you can swim and fish in the creek on the property.
208-664-2812 | www.wolflodgecampground.com

Coeur d’Alene Cellars: This winery has a swanky tasting room where visitors can sample a number of local award-winning wines while listening to live music.
www.cdacellars.com

Museum of North Idaho: Located in City Park, this cultural repository includes artifacts, visual displays and information on the local native people, the region’s mining and timbering heritage, and recreational, religious and economic pursuits in the area.
www.museumni.org

ROW Adventure Center: A one-stop shop for raft, kayak, bike and paddleboard rentals, as well as fully outfitted tours and lessons for these activities and guided fly-fishing excursions.
www.rowadventurecenter.com

Tony’s Supper Club: A cozy Italian restaurant located at the water’s edge next to the Centennial Bike Trail, so you can get there by boat, bike, car or foot.
www.tonysonthelake.com